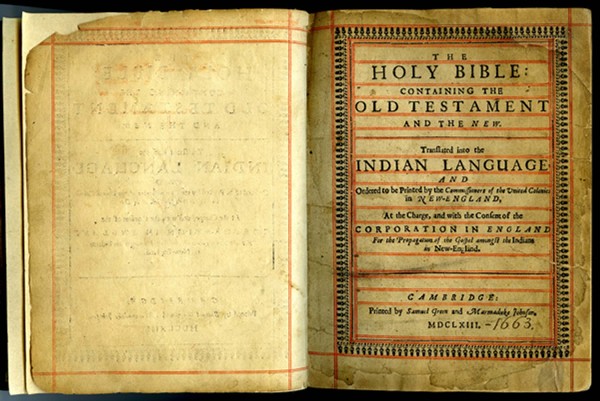 [The Holy Bible: Containing The Old Testament and The New. Translated into the Indian Language, And Ordered to be Printed by the Commissioners of the United Colonies in New-England, At the Charge, and with the Consent of the Corporation in England For the Propogation of the Gospel amongst the Indians in New-England.]

The first Bible printed in America was not an English Bible, nor was it a scholarly Greek, Hebrew, or Latin Bible. It is this 1661/63 Bible in Natick (also known as Wampanoag), the language of Algonquian people of the present-day state of Massachusetts. It is also the first Bible printed anywhere in the Western Hemisphere.

This copy [220.5973 El45h] was purchased by the Friends of the University of Illinois at Urbana–Champaign Library to mark the 5 millionth volume added to the university collections.

The work was done by John Eliot with the help of Native American assistants. Eliot was an English missionary, working in New England as a teacher. Eliot had also been involved in the translation and printing of the first book printed in the American colonies, the “Bay Psalm Book” of 1640. In 1666, he attempted a grammar of the Natick language, but it is incomplete.

The Natick Bible was printed in Cambridge by Samuel Green and Marmaduke Johnson with the help of a Native American compositor, James Printer.

The translation is significant because it is one of the few documents we have in the Natick language. Within one generation of Eliot’s missionary activities, the native people who spoke this language had disappeared, victims not of war, but of European diseases brought by the colonists.

At least one word of the Natick language was taken over into English, however, thanks to Eliot’s Bible. For the concept of an officer, captain, or duke, the Natick Bible uses the word mugquomp, a word alive and well in the English language as Mugwump.

About 1000 copies of “Eliot’s Bible” were printed, but only forty–two copies are still extant today. VH