MPAL’s Steinway Model M walnut piano was made in New York on October 4, 1927. Steinway made relatively few models over the years and the M was the most common size for a home piano. To make them “player ready” they had to lengthen the case somewhat (6″) to allow for the player installation (here by the Aeolian company), but the piano itself remained the Model M scale design. This piano was shipped to the Aeolian Company of New York City raw (with no lacquer), so the Aeolian Company most likely did the art work.

The School of Music inventory records indicate that the MPAL reproducing piano was purchased from Mrs Lee Drendel in Springfield IL; the date of the transaction is unknown.

The Library’s approximately 1,500 player piano rolls were cleaned and rehoused as necessary by the Conservation department of the University Library. Some of the rolls are too damaged to be used, while they have not been removed from the collection they will not be able to be used with the piano. The piano cannot play Ampico rolls but can play Duo-Art (with expression), or QRS and other 88 key rolls (without expression).

The piano and rolls are available by appointment only and are open to individuals, groups, and classes. Use is mediated by MPAL librarians/staff. Please request an appointment via email. For extensive use of the collection/piano beyond a one-time visit, it is best to schedule with us at least a month in advance. At this time the piano rolls do not circulate outside of the library.

Renovation of the Piano

In 2017, MPAL received a generous grant from the University’s Office of the Vice Chancellor for Institutional Advancement and additional funding from the Dean of Libraries and University Librarian, John Wilkin which made the renovation of the piano and creation of a secure room for it. The piano and its case were renovated by The Piano People of Champaign, IL and the player mechanism was restored by Mel Septon of Player Pianos Plus in Northbrook, IL. Mel’s pictures from the renovation process can be found here. 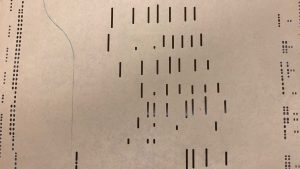 This series is temporarily suspended. However, we will have two virtual demonstrations during Spring 2021.

Please sign up for these free events via our calendar!

“One of the most significant developments in player piano history was the introduction of the reproducing piano. Whereas the foot-impelled player piano requires a certain degree of skill on the part of the operator to impart musical expression and phrasing, the reproducing piano is designed to achieve this without any manual intervention. Its function is to faithfully reproduce the music of human pianists, who recorded their work for the music roll medium.” (http://www.pianola.com/rpiano.htm)

In 1906 Sousa wrote of the “Menace of Mechanical Music” because “The new technologies of player pianos were so dangerous that [he] felt compelled to spur his public to action before music was reduced to a mere ‘mathematical system of megaphones, wheels, cogs, discs, cylinders, and all manner of revolving things.'” [Warfield, 2009, p. 431]

In her 1946 report, “Establishing and operating a music store,” published in Washington by the Government Printing Office, Anne Dienstl Cotton noted:

“A few years ago the piano industry was thought to be a dying one. From 343,000 pianos sold in 1923, sales dropped to 27,274 in 1932. At the turn of the century there were approximately 300 piano manufacturers. By 1932 the number had declined to 30. The blame for the decline in the industry was placed on the radio. In 1923 about 55 percent of the pianos sold were player pianos. When the radio came along, people lost interest in pumping a player piano when they could just plug in the radio… Far from destroying the piano industry, however, the radio ultimately served to awaken the public to good music, and a desire to play an instrument became widespread.”