There are more resources on “Russia Abroad” that did not fit in any of the categories listed in the above compilation. Some of them are not considered to be bibliographic tools. We would like to point out several as valuable and, sometimes, unique sources.

Chronology of the social life of “Russia Abroad”

There are four guides in the Russian Reference collection at the University of Illinois that record cultural events of the Russian émigré community. Some of them are annotated in the section HISTORICAL DICTIONARIES AND CHRONOLOGIES and others appear below including one that UIUC lacks.

This multi-volume chronology of Russian emigre life and events in France is especially valuable for the researcher, for it not only lists more events than other similar works, but it also has extensive indexing by person, subject, and toponyms. The subject index lists all manner of organizations from choruses and ballet schools to churches and publishers. One of the appendices provides addresses for various institutions such as schools, theaters, restaurants, cemeteries, etc. The second appendix is a chronology of Russian cinematography in France. The chronology was constructed by examining leading Russian emigre newspapers published in France. The sources of the information for each event are cited at the end of the entry in abbreviated form. Although UIUC does not hold this set, it was borrowed on interlibrary loan so that we could examine the work for inclusion in this guide. See the image below for the events that occurred on January 1, 1935.

This set is a continuation of the one listed above, but covering Russian emigre life in France for the years 1940-1975. It has the same format as the above mentioned set with the very detailed indexing in the last volume. There are about 22,000 events recorded in these volumes. 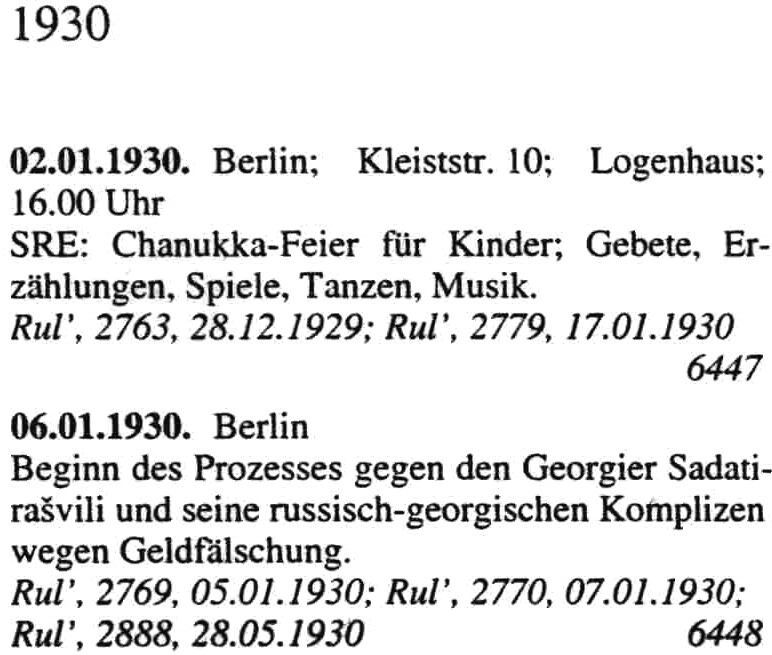 For details about the life of the Russian emigration in Germany, this source is excellent. It presents a chronology of cultural and political events from 1918-1941. The events were abstracted from various periodicals and are arranged chronologically by date. The sources of information are indicated at the end of each entry. Besides noting the events, this source also has a wonderful section on Russian emigre publishing houses in Germany. There are indexes for establishments, organizations, addresses, and names. See the image on the left for two events that took place in January, 1930.

In the last decade a wealth of materials on Russian emigration have appeared in periodicals and collections on popular Russian history. Some of these publications started in this period and were solely devoted to the subject of “Russia Abroad,” as, for example:

The purpose of this publication is to bring together information on the cultural role played by Russian émigrés of Jewish origin in “Russia Abroad”. Five volumes of the compilation include hundreds of articles on literature, music, and arts; on publishing activities; about public figures and patrons; archives and memoirs; and others. An index of names provides easy access to the materials.

Another significant source of information on “Russia Abroad ” is the historical almanac “Minuvshee” that started in Paris in 1986. Beginning in 1992 its publication was moved to Moscow. Materials on the Russian émigré represented there are mostly memoirs and publications of archival documents. Volume 25 of this irregular publication is, for all practical purposes, an index to all previous volumes. It has an annotated table of contents of volumes 1 to 24 and indexes of subjects and names. The call number at the University of Illinois is Main Stacks and Oak Street Facility947.08M668.

We would like to point out a few good sources for bibliographic and general information that might be rather unique considering the period in which these sources were published. Among them are bibliographic journals published in early years of post-Revolutionary emigration. Shatoff’s bibliography, “Half A Century of Russian Serials”, lists 30 titles of this kind (see subject index “Reference and Bibliography”).

The first article “Zhurnaly i gazety emigrantsie posle revoliutsii i sovetskaia zarubezhnaia pressa” is located in v.1, pp.1168-1173, the second one, “Kniga za rubezhom.-Izdatel’skoe delo i mi knizhnaia torgovlia”, is in vol.2, pp. 274-280. Both of these articles provide bibliographic information on the publications of Russia Abroad as well as a bibliography of Soviet publications on the subject for this period of time.

This slim volume reproduces the tables of contents for 125 Russian “sborniki” in the area of philosophy/social politics. Many of the anthologies published since 1917 were produced in emigration. The entries give only very basic bibliographical details on the anthologies, but they do cite beginning page numbers for every article contained within the anthology. The book has an introductory article and a name index.

This brief annotated bibliography is a compilation of sources documenting what Russian emigres wrote about the Russian language. There are several hundred citations for books, articles, reviews and other short pieces by some of the most renowned emigre figures. The arrangement is alphabetical by author, but there are no indexes. The most valuable feature of the bibliography are the annotations and the summary article on Russians in emigration which concludes the volume.