In addition to the sources listed on this page, you may also want to consult those annotated on the pages devoted to the periodical resources for the individual countries that used to be republics in Former Yugoslavia. On this page are a selection of sources held by the University of Illinois that pertain to Yugoslavia as a whole or to at least three of the Former Yugoslav republics.

Serbian, Croatian, and Slovene newspapers are the subject of this bibliography. The coverage is as follows: 1768-1911 (Serbia), 1789-1911 (Croatia), 1911 (Slovenia), and a small section devoted to Bulgaria. The Serbian newspapers are arranged by year of first publication, but with no index by title. The Croatian newspapers arranged in title order, using “significant word” indexing. The Slovene and Bulgarian newspapers also are arranged by title. Both the Serbian and Croatian sections give duration of periodical runs and bibliographic data about the title and the editorship. Each section was compiled by a different bibliographer and opens with a short essay on newspaper publishing in that country. Some emigre titles are included in the bibliography. See the image below for the entry on Srpska misao.

This brief bibliography of current serials from Serbia, Croatia and Slovenia from 1921-1927 arranges the titles by place of publication. It also has a small section on titles published in one of the Yugoslav languages that appeared abroad. Unfortunately, almost no information is given except the title and the place of publication. The introduction admits that the bibliography is incomplete. Also in this title is a bibliography of Yugoslav books. See the image below for some titles that were published in Dubrovnik in the years 1921-22.

The first part of this source provides detailed statistics on periodical publishing in Yugoslavia from 1947-1948. There are statistics based on individual republics and individual titles. Graphs and tables show print runs by month and in some cases by day or over a three year period. The second have of the work comprises the bibliography of titles divided by newspaper or journal and then by type and republic of origin. The entries give bibliographic and publisher information as well as average size and print run. See the graph below which depicts the print runs in the thousands of Glas Slavonije from 1945-1947. 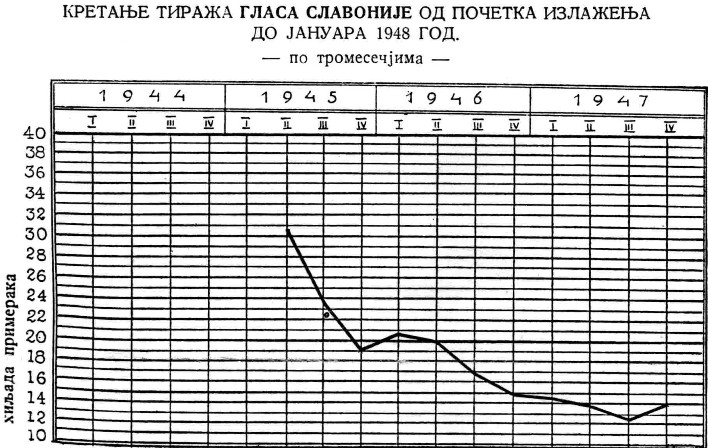 This title covers only the Yugoslav serials that were current in 1950. The entries are arranged into two main sections, one for newspapers and one for journals. Within the newspaper section the entries are divided by frequency such as dailies, weeklies, etc. and then by federal status or republic status. The journals are arranged by subject such as finance, industry, Marxism, music, etc. The entries themselves provide bibliographic and publisher information including prices. There are indexes for both newspapers and journals by publisher. See the entry below for a Romanian language title which appeared under the heading of weekly newspaper from the republic of Serbia.

This fascinating bibliography presents newspapers from Former Yugoslavia for 1945-1973 including titles for the various nationalities. The initial parts of the volume represent a history of newspaper publishing for this time period for each republic and autonomous region with major newspapers being given individual write-ups. There are also sections devoted to religious newspapers and newspapers published in the languages of various minority nationalities in Yugoslavia such as Turkish, Italian, Albanian, etc. Many of the titles have print run statistics as well. The second half of the volume is a classified subject listing of Yugoslav newspapers by republic for the year 1973. The entries provide bibliographic and publisher information. There are indexes for names and titles. See the entry below for a write-up of the Turkish language newspaper Sevinc from Macedonia. 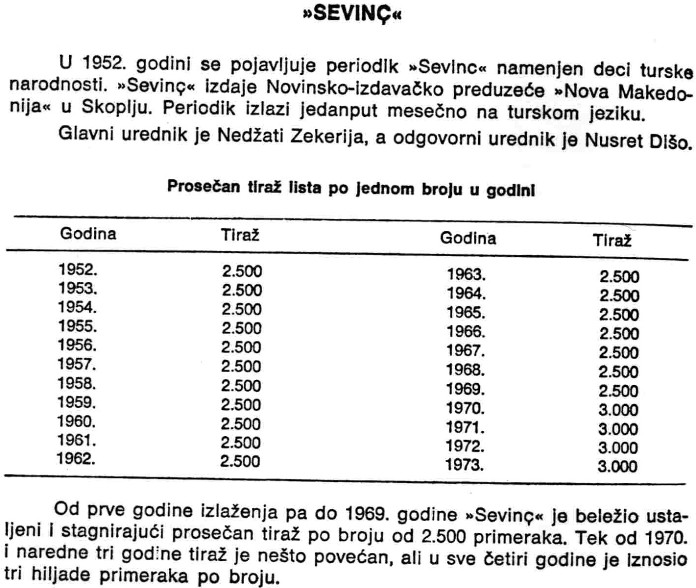 This title is the part of the Yugoslav national bibliography that lists current periodicals. It begins its coverage with 1956, but the University of Illinois only holds from 1960 on. The journal has changed its title and frequency over the years, but the arrangement is still the same. The titles are listed alphabetically, but there are indexes for subject. From 1960-81 it was a quarterly with yearly title and classified indexes. Beginning in 1982 it is an annual with a classified subject index only. This title gives complete bibliographic information for Yugoslav serials that are published in a particular year. It also shows the first year of publication and the ISSN. Since the disintegration of Yugoslavia this title covers only Serbia, Montenegro, Kosovo, and Vojvodina. U of I lacks the earlier permutations of this journal: Spisak casopisa i novina stampanih na teritoriji FNRJ (1956), Spisak listova i casopisa stampanih na teritoriji FNRJ (1957-58), Bibliografija jugoslovenske periodike (1959). See the entry on the left for a musicology journal from Belgrade which appeared in the 2001 volume.

The index of periodicals to this set shows which issues of which titles were analyzed during the compilation. The titles are presented alphabetically with place of publication also provided, but little other bibliographic information. After the letter B for “biblioteke” there is a number to indicate which libraries in Former Yugoslavia hold the title. The key to the more than 700 libraries is at the back of the book.

Beginning with 1950 Yugoslavia had an official national bibliography. This title represents the section of the national bibliography that covers articles from major Yugoslav periodicals for the years 1950-1951. Each year is indexed quarterly or monthly with an author and subject index in each issue. There are also lists of the periodicals and issues indexed in each issue. The entries are arranged in a classified subject order, but are not annotated. In 1952 this title divides into three parts which are described below under the title Bibliografija Jugoslavije: clanci i prilozi u casopisima, listovima i zbornicama. See the image below for a few entries that appeared in the 1950:2 issue under the heading of Sports.

This title is a continuation of the one listed above that covered the years 1950-1951. It is the national bibliography of Yugoslavia for articles from major Yugoslav periodicals for the years 1952-1976. In 1952 this title divided into three sections covering three broad subject areas: Series A Drustvene nauke (Social sciences), Series B Prirodne i primenjene nauke (Natural and applied sciences), Series C Umjetnost, sport, filologija, knjizevnost i muzikalije (Art, sport, humanities, literature and music). The entries are arranged in a classified subject order in each of the three series with indexes for authors and subjects in each issue. In 1977 the title changed names and slightly changed the name of series B to Prirodne, medicinski i tehnicke nauke (Natural, medical and technical sciences), but otherwise the arrangement of the entries is the same. After the disintegration of Yugoslavia the scope of the title altered to reflect the new shape of the country, thus Croatian, Slovene, and Macedonian periodicals were no longer included. It is still being published today. See the entry on the left which appeared in the 1997:11-12 issue under the heading of Austrian literature.