One of the best tools for locating periodicals is online catalogs. See the page devoted to National Bibliography in Slovenia for a description of the Slovene online catalogs. Please remember that sources pertaining to Yugoslavia are relevant for Slovene periodicals. Article citations also appear in these catalogs. This is discussed below in the section for periodical indexes.

The digital catalog portal for the Slovenian Bibliography has incorporated bibliographic records for books, periodicals, printed music scores, sound recordings, cartographic materials, pictorial materials, and articles. Important to this page are the articles and the periodicals accessible.

Articles are browsable by publication, publication year, and more. These are articles included in the Slovenian Bibliography and they date back to 1858. Below is a record from this website. 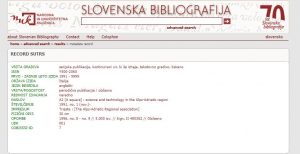 This work is included on this page because it contains the bibliography compiled by the noted Slovene bibliographer Janko Slebinger entitled Slovenski casniki in casopisi: bibliografski pregled od 1797-1936 which is almost 175 pages long and presents over 1000 Slovene periodicals from 1797-1936. The titles are arranged by year of first issue with citations that provide place and dates of publication, editors, and a brief annotation about the scope of the periodical. There is an alphabetical title index as well as indexes for subject and place of publication. After the bibliography the remaining pages of the book are articles on the history of Slovene journalism. see the image below for information about a title Samouprava from 1927.

Slovene periodicals from 1937 to May 1945 are listed in this bibliography first by year and then alphabetically by title. Within the sections for each year the citations for continuing serials appear first and the citations for new titles that began publication in that year are listed second. Slovenian emigre periodicals are also included. Holdings are given for various institutions such as the Narodna in univerzitetna knjiznica v Ljubljani. This work continues the coverage of the bibliography annotated above which ended with 1936. There are indexes for subjects, editors, publishers, places, printers, and titles. Some statistics are also furnished. Titles published in Slovenia but in other languages are presented in an appendix. See the image below for Arestant which was produced in 1942.

This bibliography covers Slovene emigre periodicals produced from 1891-1945. The entries are arranged chronologically by first date of publication and provide full citations including dates and place of publication, title changes, editors, etc. The holdings in the Narodna in univerzitetna knjiznica v Ljubljani are also provided after the abbreviation NUK. Indexes for subject, editors, publishers, printers, titles, and places of publication round out the book. The introduction acquaints the reader with some earlier attempts at compiling bibliographies of Slovene emigre serials. The image below is for a serial published in Milford, New Jersey. 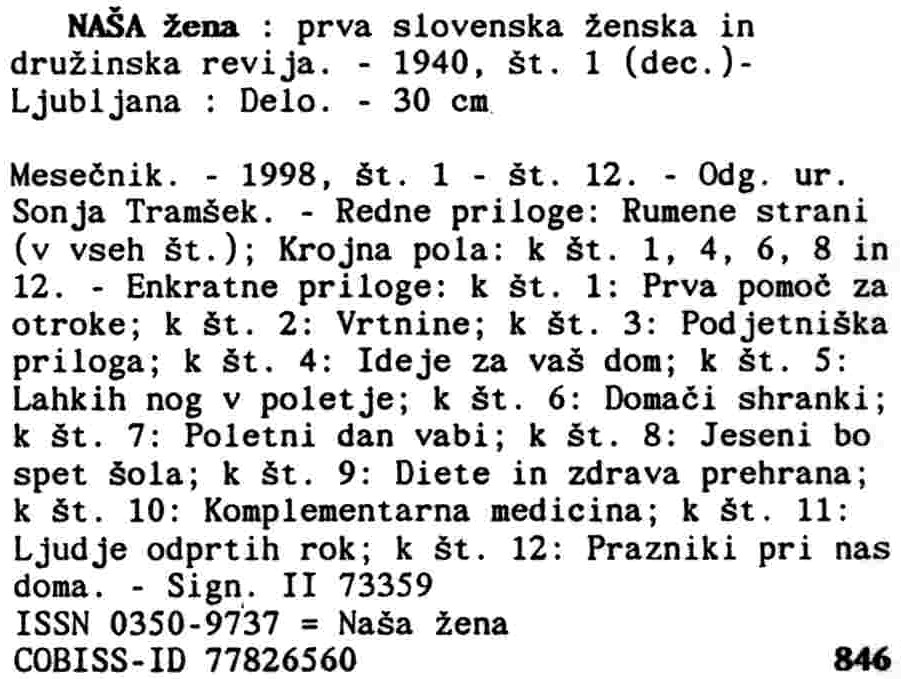 The Slovene national bibliography which began in 1945 has traced Slovene periodical titles since its inception. From 1945-1950 the periodicals are listed in the annual volume among the books and other materials, but beginning with 1951 periodicals received their own section within the annual volume of the bibliography. In 1978 the national bibliography divided into four separate volumes: A/serial publications, B/books, C/index of articles, D/other non-book items. (For information about the other sections of the bibliography see the annotation on the page devoted to National Bibliography for Slovenia). Since 1978 Series A. has been issued annually as an independent serial in its own right. It presents Slovene serials alphabetically by title. The entries show which issues of which titles appeared in a given year as well as providing publisher information, ISSN, etc. The bibliography excludes serials that are published in non-paper formats such as CD-ROM, microfilm, etc. There are indexes for names and subjects. See the entry on the left for the monthly Nasa zena which appeared in the 1998 volume.

Use the bibliographies below for articles from Slovene publications from 1945-1979. Use the Slovene online catalogs for coverage from 1990 to the present. There is a gap in article coverage for Slovenia from 1980-1989.

This bibliography was compiled to fill the gap of Slovene article coverage from 1945-1950 when articles were not covered in the Slovene national bibliography. See the annotation immediately below for coverage of the years 1951-1979. Citations are arranged by subject classification with an author index and an alphabetical list of subjects. There is a list of the periodicals included in the bibliography at the front of the book. The bibliography was compiled by scholars at the Slovene Academy of Sciences and Arts. See the image below for some entries under the heading of “Slovene Opera.” 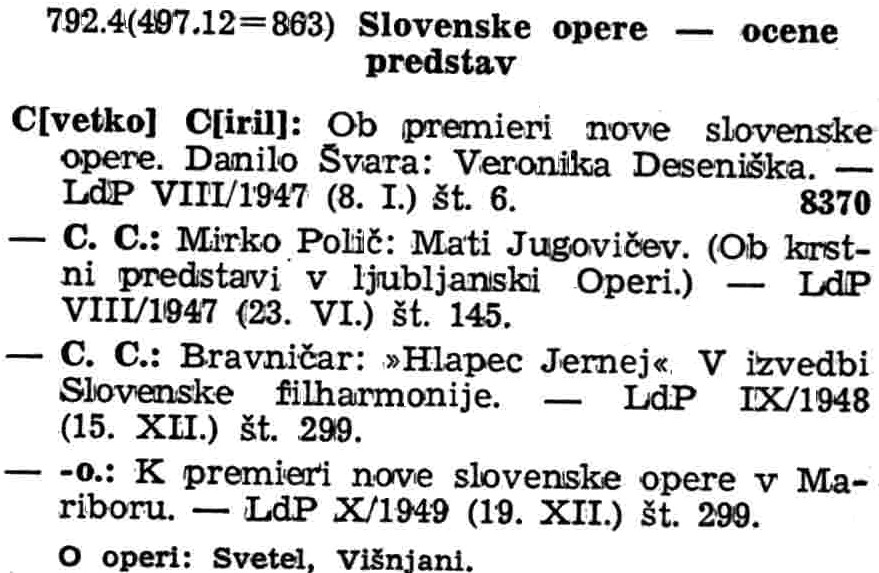 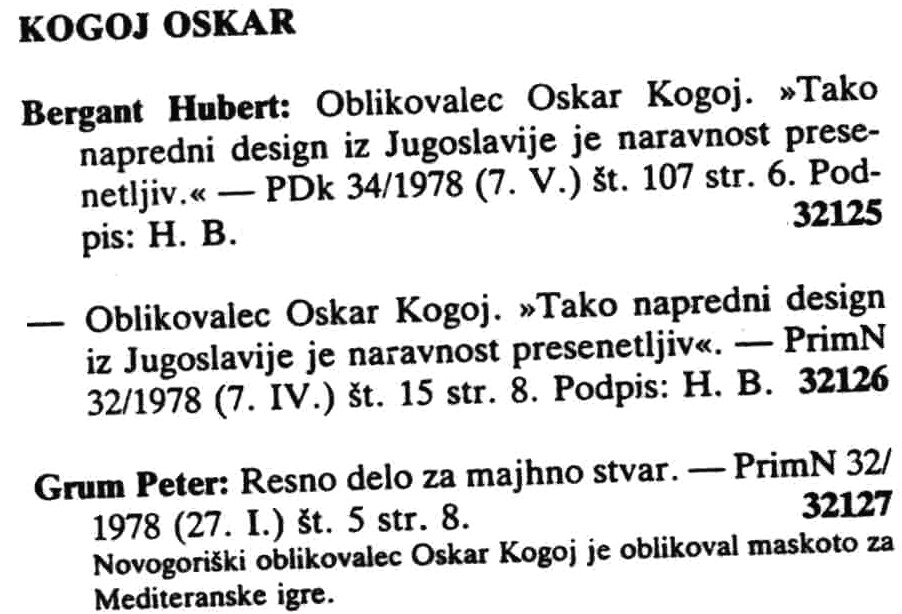 The Slovene national bibliography began in 1945, but the coverage of articles did not begin until 1951. The article citations appeared in their own section within the annual volume of the national bibliography until 1978 when it divided into four separate volumes: A/serial publications, B/books, C/index of articles, D/other non-book items. The articles section ceased publishing in a printed format with the 1978-1979 volume and became available in an online format beginning with 1990 via the Slovenian online catalogs described elsewhere in this course. That means there is a gap in coverage of articles from Slovene periodicals for 1980-1989. Citations are arranged by subject classification with a name index to facilitate access. The section on biography is interesting as it furnishes citations for articles about specific individuals under their name. See the entry on the right that appeared in the 1978-1979 as an example for Oskar Kogoj.