Online catalogs are excellent resources for locating information about periodicals. The online catalogs of the national libraries of each country are discussed in detail on the pages for national bibliography for each country. They also are grouped together for convenience on one page about Library Catalogs. Please remember that sources pertaining to Yugoslavia are relevant for Serbian and Montenegrin periodicals. In addition, many of the Serbian periodical bibliographies contain information about Montenegrin titles too. The section of the Yugoslav national bibliography devoted to periodicals Bibliografija Jugoslavije: serijske publikacije is still being published and now it handles only titles from Serbia, Montenegro, Kosovo, and Vojvodina.

Stojan Novakovic is responsible for compiling this work, the first truly noteworthy Serbian bibliography. It covers Serbian books and periodicals from 1741-1867 which are presented chronologically by publication date. There are almost 3300 entries in this bibliography with indexes for subject, author, title without author, publisher, and historical name. At the end of the book is a table with statistics on the number of items per year. These kinds of figures are always interesting when tracing the development of a particular nation’s publishing output. A number of additions and corrections to this title have been published in various periodicals. See the entry on “Bibliografija” in Enciklopedija Jugoslavije , volume 1, p.505 [U of I Library  Call Number: Yugoslav Reference 914.97 En16] for a full list of citations for the additions. The entries for periodicals list only what was published in a given year. See the entries below for two periodicals from Beograd in 1852.

Covering periodicals in Serbo-Croatian up till 1920 and from all areas (Serbia, Croatia, Montenegro, Macedonia, Bosnia, emigre locations), this bibliography gives bibliographic data for almost 700 periodicals. Entries are arranged alphabetically by title and provide subtitles, dates and places of publication, and an annotation about the history and/or content of the title. There is a subject index. See the entry below for the title Tribuna from Beograd.

Novi Sad is the leading city in the Vojvodina region and the home of Matica Srpska. This bibliography presents serials published in Novi Sad from 1824-1918 regardless of language of publication. Thus some of the titles are in Serbo-Croatian, some in Hungarian, others in Slovak, etc. The first title covered began in 1824, the famous Letopis Matice srpske which is still being published today. The entries are arranged chronologically by first date of issue and provide detailed information about the dates of publications and enumeration, editors, and title changes, among other facts. Many of the entries are accompanied by reproductions of title pages. There are indexes for titles, editors, names, pseudonyms, publishers, and chronology. There is also a chronological table of titles which shows graphically what titles were published in a particular period of time. See the entry below for a title that began to appear in 1878. 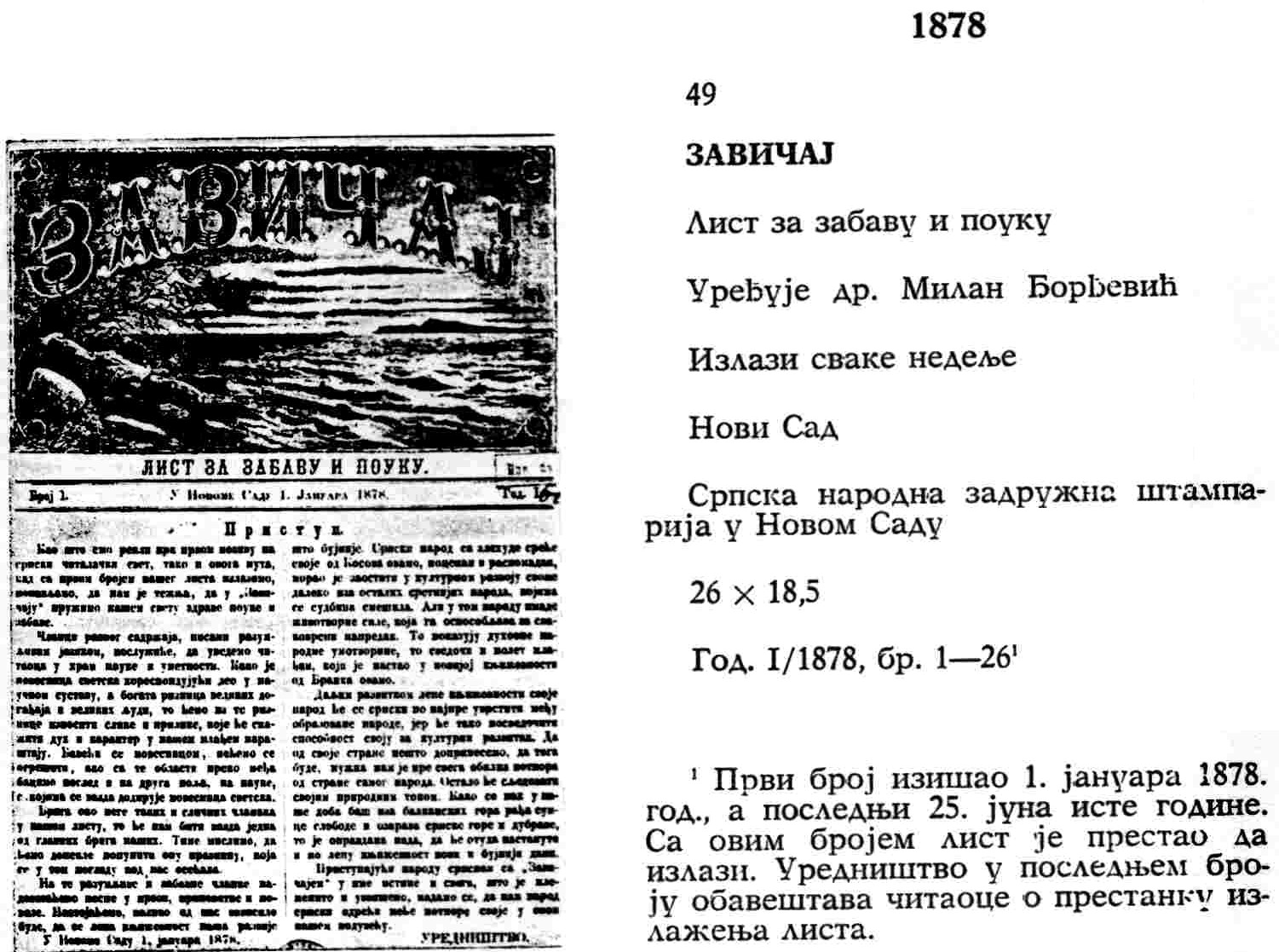 Although some of the works listed in the file for Periodical Resources for Former Yugoslavia cover the time period of 1947-1948, these two volumes are specifically on Serbian books and periodicals. They represent what was received by the National Library in Belgrade and were an attempt to fill a gap in national bibliography that existed at that time. It is arranged by subject with a separate section for various types of periodicals. The entries for books and annuals not only provide bibliographic citations, but also pagination, original price and print run figures. The 1948 volume has an author index, but does not have the newspapers or serials section. The 1948 volume also has a much longer introduction which offers a brief survey of publishing in Serbia in 1948. See the image below an entry in the 1947 volume under the heading of weekly newspapers.

Serbian periodicals from 1944-1965 are the focus of this extensive bibliography. It lists over 2000 local, regional and republic materials, giving a brief history of each periodical by means of basic publication information such as editors, title changes, dates of publication, frequency, etc., but it does not cover Vojvodina or Kosovo. Items that are not true periodicals such as calendars are not included. Entries are listed in alphabetical order by title. There are indexes for titles, places of publication, and editors. At the end of the introduction is a list of bibliographic sources the compilers consulted while amassing their work. Below is an entry for a Belgrade journal entitled Zena danas.

Although we have not annotated many sources here, the items that pertain to Yugoslav periodicals indexes are relevant for Serbia. Some of these titles include Bibliografija rasprava i clanaka, Bibliografija Jugoslavije: clanci i knjizevni prilozi u casopisima, and Bibliografija Jugoslavije: clanci i prilozi u casopisima, listovima i zbornicama. These are described on the page detailing Periodical Resources for the Countries of Former Yugoslavia. The online catalog of the National Library of Serbia also contains citations for articles as does the database Bibliografije istrazivaca. Both of these sources are annotated on the page devoted to National Bibliography for Serbia. Another source annotated on the page for Yugoslav Monographic Bibliography is a two-volume index to Letopis Matice Srpske entitled Sadrzaj Letopisa Matice srpske 1825-1950. and Sadrzaj Letopisa Matice srpske 1951-1960.

This massive retrospective bibliography of Serbian almanacs and calendars from 1718-1970, including Serbian titles published abroad such as Amerikanski Srbobran, also provides the citations for the full contents of every issue. It opens with a long bibliographic essay on the history of almanac and calendar publishing in Serbia, but the main body of the text is the bibliography and index of the titles. To date only the first volume covering the letters A-J has been published. Entries, arranged by title in Cyrillic alphabetical order, include full bibliographic information plus a physical description of the piece such as the number of pages and the height. There is also an abbreviation to show which library in Serbia, Hungary or Austria holds the item. Following is the contents with page numbers. There are indexes for personal and geographic names. There is also an alphabetical list at the back that briefly shows which titles and issues are included in the index/bibliography. See the image below for the 1881 volume of Vardar. 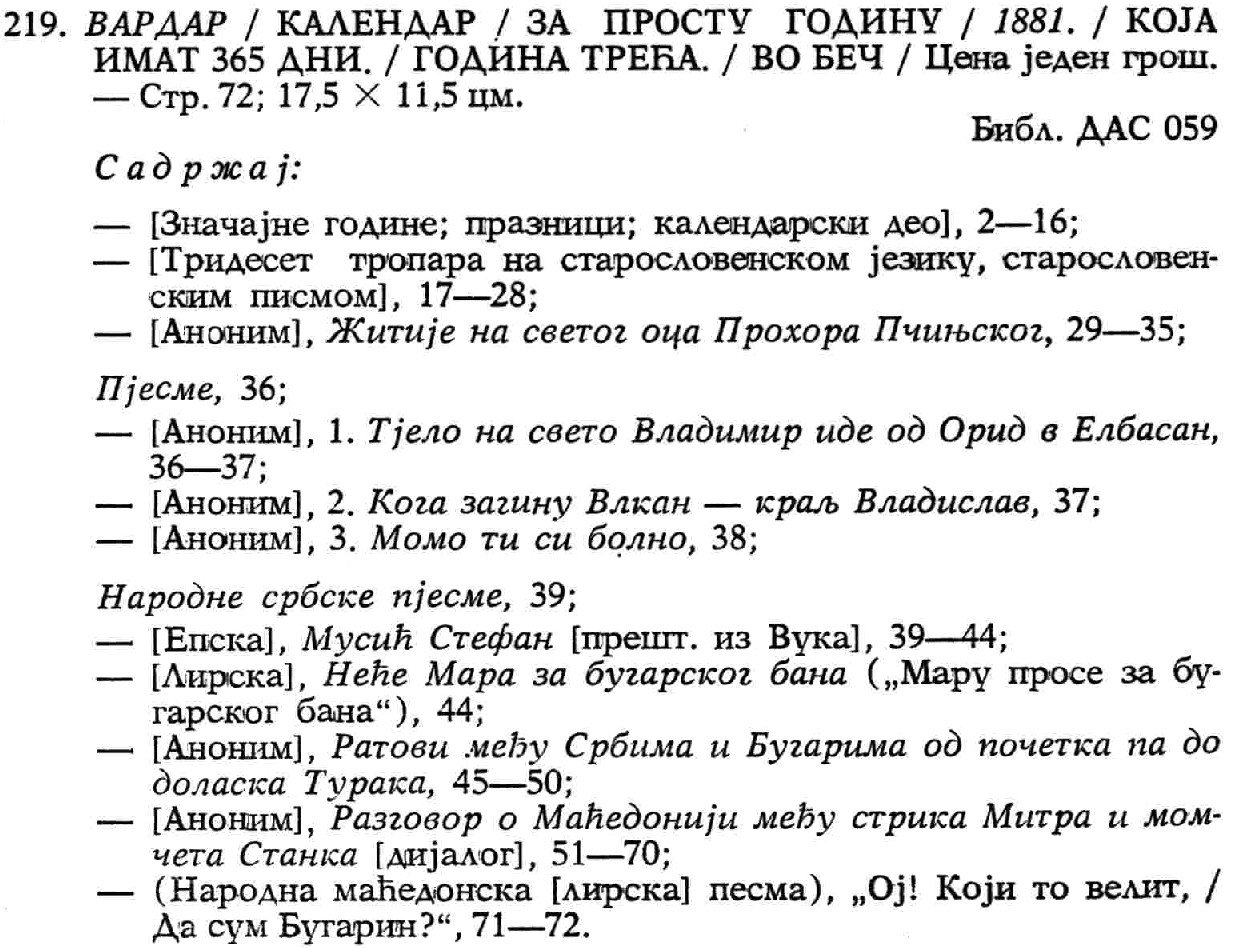