In addition to the resources glossed on this page, please peruse those appearing on the page devoted to Periodical Resources for Former Yugoslavia which are all relevant for Croatia. Information and holdings of recent periodicals often can be found readily in online catalogs. The online catalog of the Nacionalna i sveucilisna knjiznica in Zagreb is annotated on the page for National Bibliography of Croatia as are a number of printed bibliographies for books that also include coverage for periodicals such as Bibliografia hrvatska. Dio prvi. Tiskane knjige and Hrvatska bibliografija for 1941-1944. 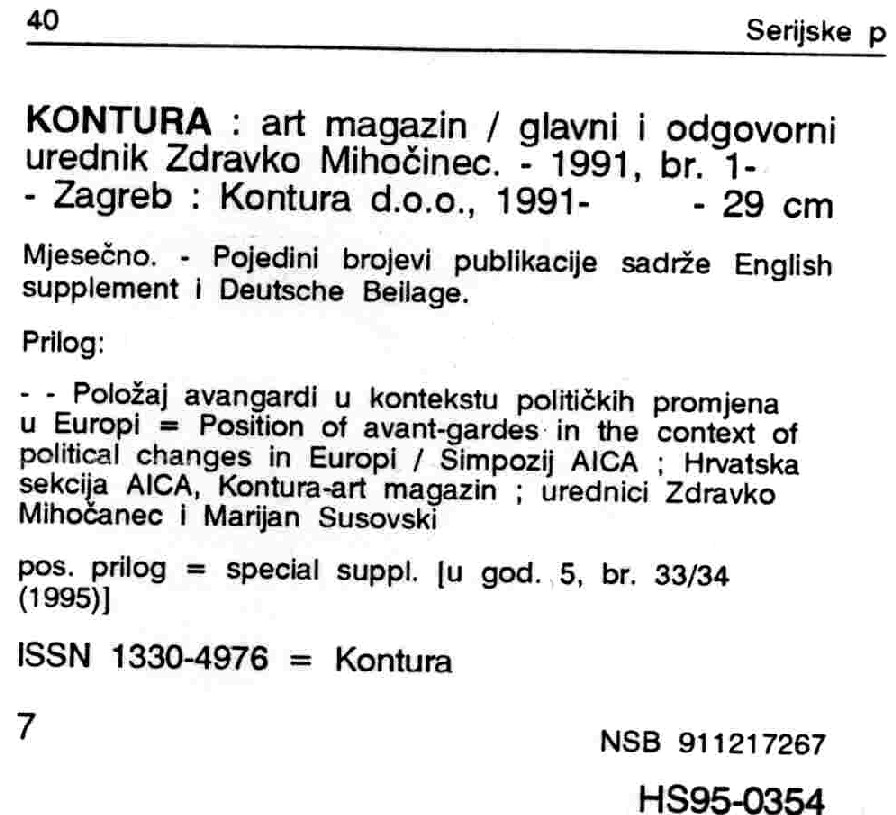 Niz C is the section of the current Croatian national bibliography devoted to describing Croatian periodicals. It began its coverage with the year 1991. It is compiled by bibliographers at the National and University Library in Zagreb and should be comprehensive. Serials are listed alphabetically by title and the entries provide information like subtitles, publisher, frequency, ISSN, dates of publications, etc. There are indexes for corporate publishers, subjects by Universal Decimal Classification enumeration, and ISSN. See the entry on the left for the art monthly Kontura which appears in the 1995:1 issue.

Please use the sources listed below in combination with those on the page for Periodical Resources for Former Yugoslavia for more complete coverage of Croatian articles. The University of Illinois lacks one important printed source for Croatian articles from 1979-1981 Bibliografija rasprava, clanaka i knjizevnih radova u casopisima SR Hrvatske, Niz B, but we have its later manifestation, Hrvatska bibliografija. Niz B which is annotated below. The online catalog of the National and University Library in Zagreb also contains citations for articles from Croatian journals beginning in 1990, so do not overlook that as a potential source of information.

The contents of certain Croatian periodicals published from 1945-1952 are the focus of this 7 volume bibliography. At the beginning of each volume is the list of periodicals that are analyzed in that volume. The citations are arranged by subject with an author/translator index and a subject index in each volume. Some of the citations have very brief annotations. The image below contains several entries which appeared in the 1945/1946 volume under the heading “Pedagogy.” 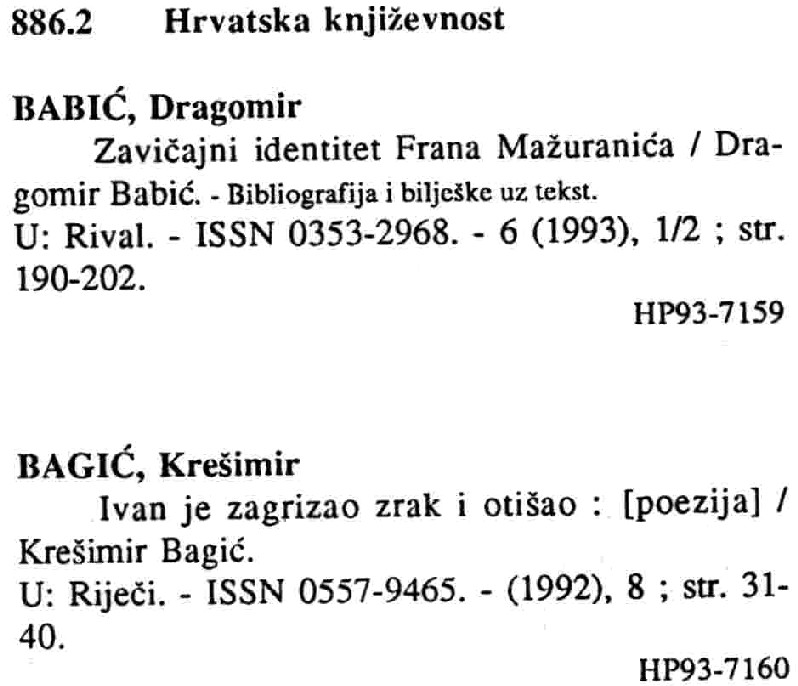 Niz B is the section of the current Croatian national bibliography devoted to analyzing articles in Croatian periodicals. It began its coverage with the year 1990, but includes only the contents of selected Croatian periodicals. It is compiled by bibliographers at the National and University Library in Zagreb. Articles are listed in a classified subject arrangement based on the Universal Decimal Classification enumeration and the entries provide information like author, full article title, pagination, title and ISSN of the journal in which the article appears. There are indexes for authors and subjects, as well as a list of all the journals and numbers analyzed in each issue. Since there are no annual indexes, each issue and its indexes must be searched individually. See the image on the left for two article citations that appeared in the 1993:11 issue under the heading “Croatian literature”.