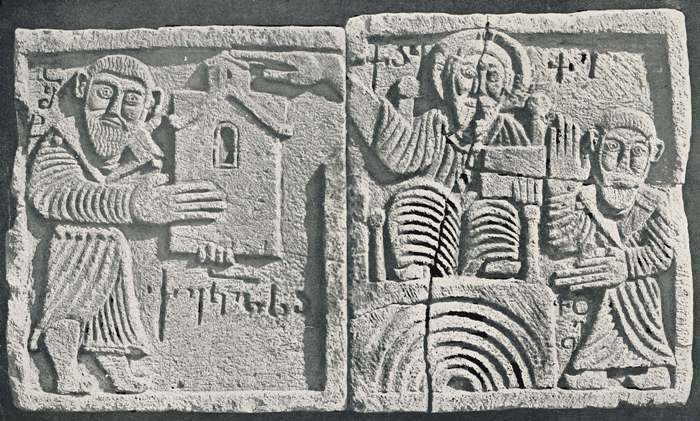 This excellent bibliography of 356 pre-1917 Georgian periodicals not only contains detailed information on each publication (along the lines of the classic Russkaia periodicheskaia pechat’: 1702-1894: spravochnik and Russkaia periodicheskaia pechat’: 1895-oktiabr’ 1917: spravochnik, published in Moscow in 1957-1959), but also complete publication history, the complete holdings of (what is now) the Russian National Library for each title, and, in some cases, brief bibliographies of works dealing with the periodicals themselves or their editors and publishers, etc. In no other published or online source is it possible to review the Russian National Library’s Georgian periodical holdings, with obvious implications for researchers planning a trip to St. Petersburg. 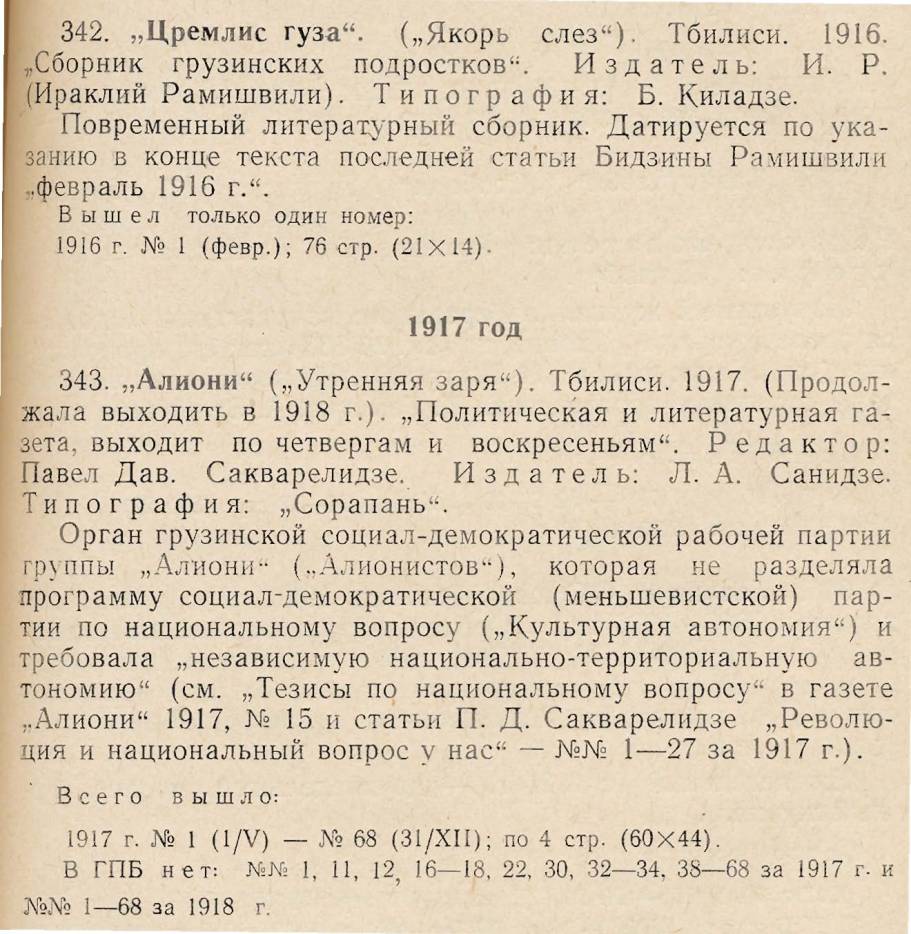 Fourteen separate indexes and three lists provide multiple points of access to the materials. (Two of the lists, for the sake of completeness, detail journals and newspapers not represented in the Russian National Library’s collection). One of the very few drawbacks is that Georgian titles are not given in the original; they are, however, both transliterated into Cyrillic script and translated into Russian.

This bibliography of pre-1946 Georgian periodicals, broadly defined, includes nearly 1,700 entries for journals and newspapers published in Georgian, Russian, Abkhaz, Azeri, Ossetian, and a handful of Western European languages within the confines of the Georgian SSR, as well as for Georgian-language periodicals published in Moscow, Baku, Kiev, Vladikavkaz, Berlin, Geneva, and Paris. The bibliography was compiled on the basis of the periodical holdings and card catalogs of about a dozen major libraries, archives and museums in Georgia, as well as those of private libraries (also in Georgia). Some indication of which periodicals are held in which collection is provided in the individual entries, enabling the bibliography to also function as a union catalog. Users should note that the impressive comprehensiveness of the bibliography is nevertheless limited by the collections consulted; the periodical holdings of the major libraries of Moscow and St. Petersburg, for example, are not reflected here.

The entries are organized into two major and two minor sections, as follows: newspapers and journals; other periodical publications (including odnodnevki and sborniki); hectographed and hand-written journals; and publications in foreign languages. Within each section the entries are listed chronologically by year, and within each year by place of publication. Indexes of periodical titles, personal names, places of publication, and publishers/publishing bodies are provided, as is a subject index. All index terms, regardless of language, are arranged in Georgian alphabetical order.

This supplement to the previous bibliography contains 178 entries for journals and newspapers published in the Georgian SSR in 1946 and 1947. The entries are derived from the holdings of the State Book Chamber of the Georgian SSR (now merged with the National Library), and are divided into two sections, one for journals and one for newspapers. Journals are organized by subject, and newspapers are organized geographically by region. Separate Georgian- and Russian-language indexes are provided for periodical titles, publishing bodies and personal names.

This bibliography, which was unavailable for review, indexes pre-Soviet Russian-language periodicals published in Georgia.

This fully searchable database thus far only contains bibliographic records for Georgian-language journal articles published during two specific time periods, namely 1832-1925 and 1939-2006. This does, however, correspond with a very productive period in Georgian publishing history, meaning that over 439,000 records were included in the database as of April 2015. Within each bibliographic record, clicking on an author’s name, a journal title, or a subject heading (most of which are quite general) will bring up all other records in the database with that name/title/subject heading. In theory, this is an easy way to review the contents of specific journals over a long (or short) time period.

This monthly bibliography of articles from journals published in Georgia includes a personal name index, a geographic index (since 1955), and a list of the journals indexed in each issue (since 1943). Citations to Georgian- and Russian-language articles are listed by subject in separate sections. Articles, documentary/archival materials, and works of fiction published in Georgian journals are included.

Like Cignis matiane, Žurnalis statiebis matiane experienced a gap in publication between May 1957 and January 1959; unlike Cignis matiane, it appears that this gap was never filled. The National Library’s AMAT database (see above) does contain 2,623 articles for 1957 and 1,653 for 1958, but these still fall well below the average number of articles per year for the time period.

In general, bibliographic access to newspaper articles is fragmentary, inconsistent, and cumbersome, but this cannot be said in the case of Georgia. The National Library’s group newspaper article databases provide a depth and breadth of current and retrospective online bibliographic coverage that is rarely seen for this format. The major drawback is that the databases cannot be searched as a unit, meaning that (depending on the chronological parameters of the query) the same searches must be performed as many as eight times.

Database included 140,552 records for articles from various 19th- and early-20th-century newspapers, including Sak’art’velos gazet’i, Dila, Droeba, Lexvari, Cqaro, Č’veni sitqva and Isari. The coverage for Droeba (and perhaps other newspapers) appears to duplicate that found in K’art’uli gazet’ebis analitikuri bibliograp’ia (see below). The KOMUN database contains over 90,000 records for newspaper articles published in Georgia between 1920 and 1943, while KOMU2 includes records for over 18,000 articles that appeared between 1954 and 1956.

This substantial set of bibliographies provides citations to nearly every article appearing in several major Georgian newspapers from before the revolution of 1905. The entries are organized by subject within each volume, but different volumes are devoted to different newspapers/years, so that scholars researching a particular subject, author, etc. will have to repeat their searches in each volume in order to make full use of this source. Volumes which appear in two parts may spread the subject organization over both (as with volume 3, where part 2 includes articles pertaining to art, literature, folklore, printing and publishing, medicine, etc., while other subjects are covered in part 1), or cover a different newspaper in each part (as with volumes 5 and 6).

Published monthly from 1934-1938, thirty-six times a year from 1939-1960, and twice a month from 1961-1991, Gazet’is statiebis matiane provides citations to individual articles published in Georgian newspapers. Georgian-language articles are indexed by subject in one section, and Russian-language articles in another. Each issue includes a list of the newspapers indexed in that issue, as well as a personal name index, a geographic index (since 1959), and an index of institutions and other corporate bodies.

After reviews began to be included in Cignis matiane in 1939, the State Book Chamber of the Georgian SSR published this retrospective bibliography of reviews appearing in Georgian books, journals and newspapers for the preceding eight years.

This annually-published bibliography provides citations to reviews, review articles, critical articles and critical surveys that appeared in periodicals published in Georgia. The citations are organized according to the subject matter of the item(s) being reviewed, with Georgian-language reviews listed first and Russian-language ones listed second within each section. A list of the periodicals consulted, an index of reviewers’ names, and a combined index of the titles of reviewed works and the names of authors, editors and translators are included. Volume for 1958 is 106 pp., 676 entries. 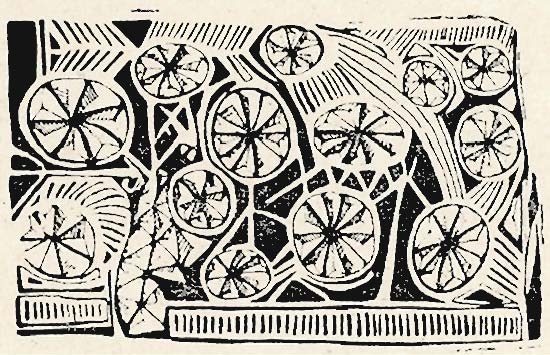