According to various descriptions of the history of Bulgarian bibliography, the first periodical published in Bulgaria, Liuboslovie, appeared in 1844. Since then thousands of titles have been published. The volumes described below are standard resources for ascertaining information about Bulgarian periodicals from 1844 to the present. There are also a few suggestions about current periodicals as well. The second half of this page annotates sources that index the contents of Bulgarian newspapers and periodicals.

U of I lacks one important bibliography of Bulgarian periodicals, but it is widely held in the U.S. It is Bulgarski periodichen pechat 1944-1969. Bibliografski ukazatel. Sofiia, 1975. 3 vols. 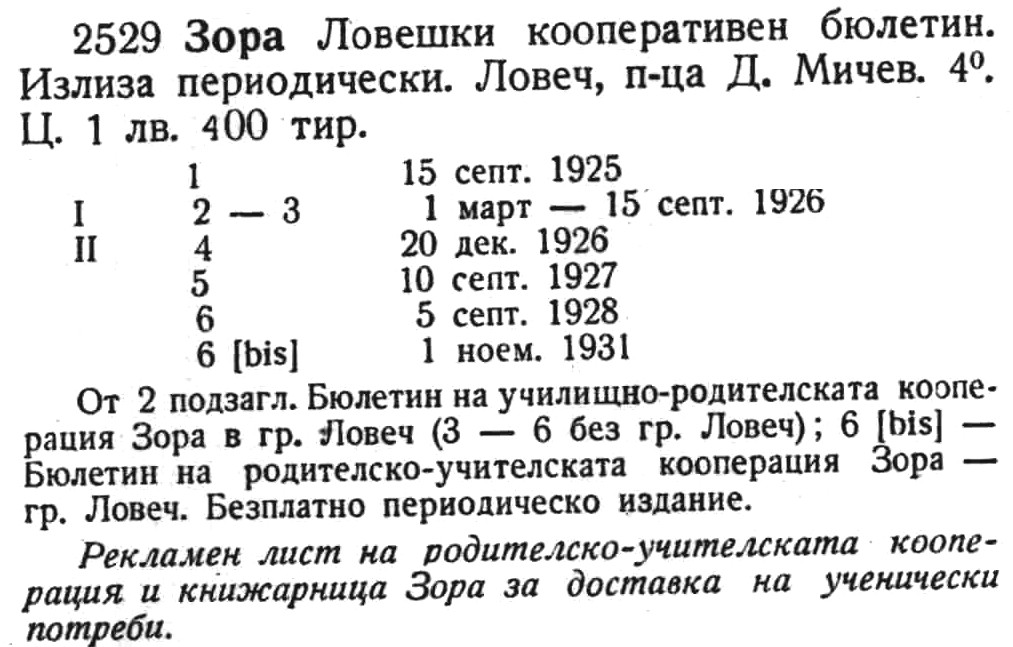 For periodicals that appeared on Bulgarian territory or in the Bulgarian language from 1844-1944, this is an excellent source. Its coverage includes journals as well as newspapers. It was compiled by researchers at the Bulgarian Bibliographic Institute. Most entries were described with the piece in hand. Those that were not seen by the compilers are marked with an asterisk. The volumes are arranged in alphabetical order by periodical title. Entries provide detailed bibliographic information such as full title, place and dates of publication, editors, number of issues published, publisher information, price, etc. In some cases even the circulation size is given. The introductory materials are interesting for they provide an overview of Bulgarian periodical publishing from 1844-1944. See the entry on the left for the title Zora.

Although this source is not as comprehensive as the one listed above, it does provide interesting data on the holdings of various periodicals at the Bulgarian National Library in Sofiia. Entries are grouped by type of periodical, newspaper versus journal. They are listed alphabetically within each group. Entries provide full title, place and dates of publication, price and holdings. There is also a listing of titles that are absent from the National Library, but were published during the stated time period. There are indexes for chronology and place of publication. See the entry below for the title Russe.

Although there are other more comprehensive bibliographies that cover 19th century Bulgarian periodicals listed on this page, this source is unique in that it not only provides some bibliographic data on the titles, it also has quite a lot of supplementary information such as biographical sketches of the publishers or editors or statements about the historical significance of the title. But do not expect to get full bibliographic information on the periodicals from this source. Use one of the others listed on this page for that kind of data. The entries often span several pages. Entries are arranged chronologically by first date of publication. At the end of the book is an alphabetical list of titles.

Published since 1947, this title is part of the Bulgarian national bibliography. It provides bibliographic coverage of all periodicals published in Bulgaria regardless of the language of publication. Since this is part of the national bibliography it is considered a standard reference source for Bulgarian. It provides full title, ISSN, publisher, size, print run, editors, and which issues of the title appeared in the given year. Currently, the entries are divided by type of periodical, with newspapers listed first, followed by journals, bulletins, and then periodical collections. Some earlier issues have the entries arranged by subject. Within these sections the entries are arranged alphabetically by title. There are indexes for title, subject (universal decimal classification), place of publication, new titles, ceased titles, and ISSN. See the entry below for a title that began in 1991.

It has some coverage of Bulgarian periodicals for the given time period. See the annotation for it on the page that covers Bulgarian National Bibliography.

This is another source that covers both Bulgarian monographs and periodicals. It is described fully on the page that addresses Bulgarian National Bibliography.

It is the main title of the Bulgarian national bibliography; it has from 1897 to the mid 1940’s and it also included a section on new periodical titles. See the page on Bulgarian National Bibliography for a fuller description of this title.

To find information on more current periodicals (since Bulgarski periodichen pechat is behind in publication) there are a couple of sources that may be helpful. One is Ulrich’s Periodicals Directory which U of I holds in both the print and online formats. Another suggestion is to use the various online catalogs available on the Internet from Bulgaria. For example, the University of Sofiia has their catalog online, but it does need Cyrillic (ISO) fonts to search and display properly. Unfortunately, Bulgarian libraries do not yet have a vigorous presence on the Internet, but sometimes the few available catalogs can be helpful. See the image below which shows the holdings information available from the University of Sofiia catalog for one periodical entitled Trud i pravo.

From 1952-1971 this title presented the contents of Bulgarian periodical publications arranged by general subject. After 1971 it split into two titles that are part of the Bulgarian national bibliography, Letopis na statiite ot bulgarskite vestnitsi, which gives citations for Bulgarian newspaper articles, and Letopis na statiite ot bulgarskite spisaniia i sbornitsi, which gives citations for Bulgarian journal articles and articles in collections. Each issue has a name index and a list of the titles and numbers indexed in the issue. See the entries below for a few citations that appeared in 1971 in the section for reviews under the heading of Literature.

Part of the Bulgarian national bibliography, this periodical indexes the contents of selected Bulgarian newspapers. It is a standard reference source for doing Bulgarian newspaper research. This title is organized much like its Soviet/Russian counterpart, Letopis’ gazetnykh statei. It arranges the citations by subject and provides only an alphabetical name index and a geographical index for further access. An annual index is published, but the University of Illinois has only scattered holdings for it. Each issue also lists the newspapers and numbers of those newspapers that are indexed in that issue. For the years 1952-1971, see Letopis na periodichniia pechat which covered both newspaper and journal articles before the title split into two different titles. See the entries below which appeared in the 1999:11 issue under the heading of Parliaments. 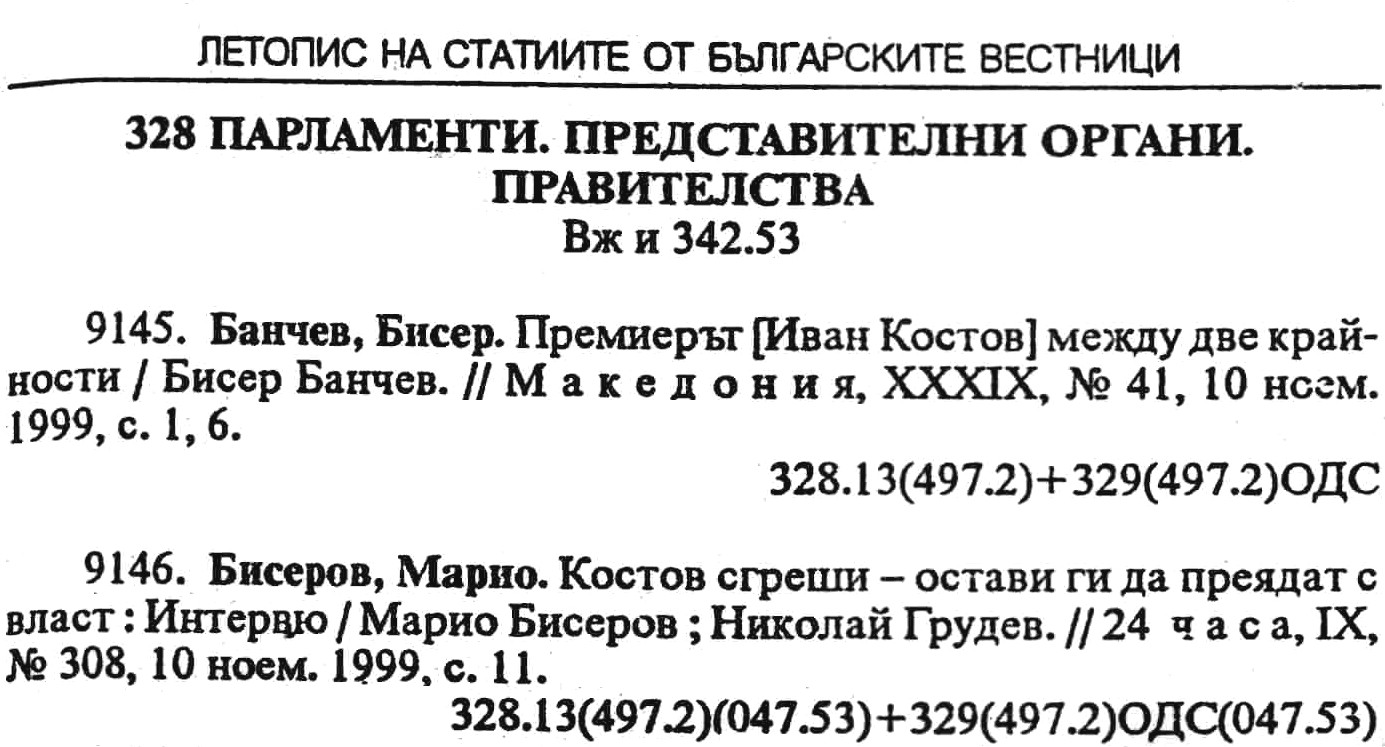 Part of the Bulgarian national bibliography, this periodical indexes the contents of selected Bulgarian journals and collections. It is a standard reference source for doing Bulgarian research. This title is organized much like its Soviet/Russian counterpart, Letopis’ zhurnal’nykh statei. It arranges the citations by subject and provides only an alphabetical name index and a geographical index for further access. An annual index is published and the University of Illinois has many of these issues. Each issue also lists the journals/collections and numbers of those journals that are indexed in that issue. For the years 1952-1971, see Letopis na periodichniia pechat which covered both newspaper and journal articles before the title split into two different titles. See the entries below which appeared in the 1999:11 issue under the heading of Military Matters. 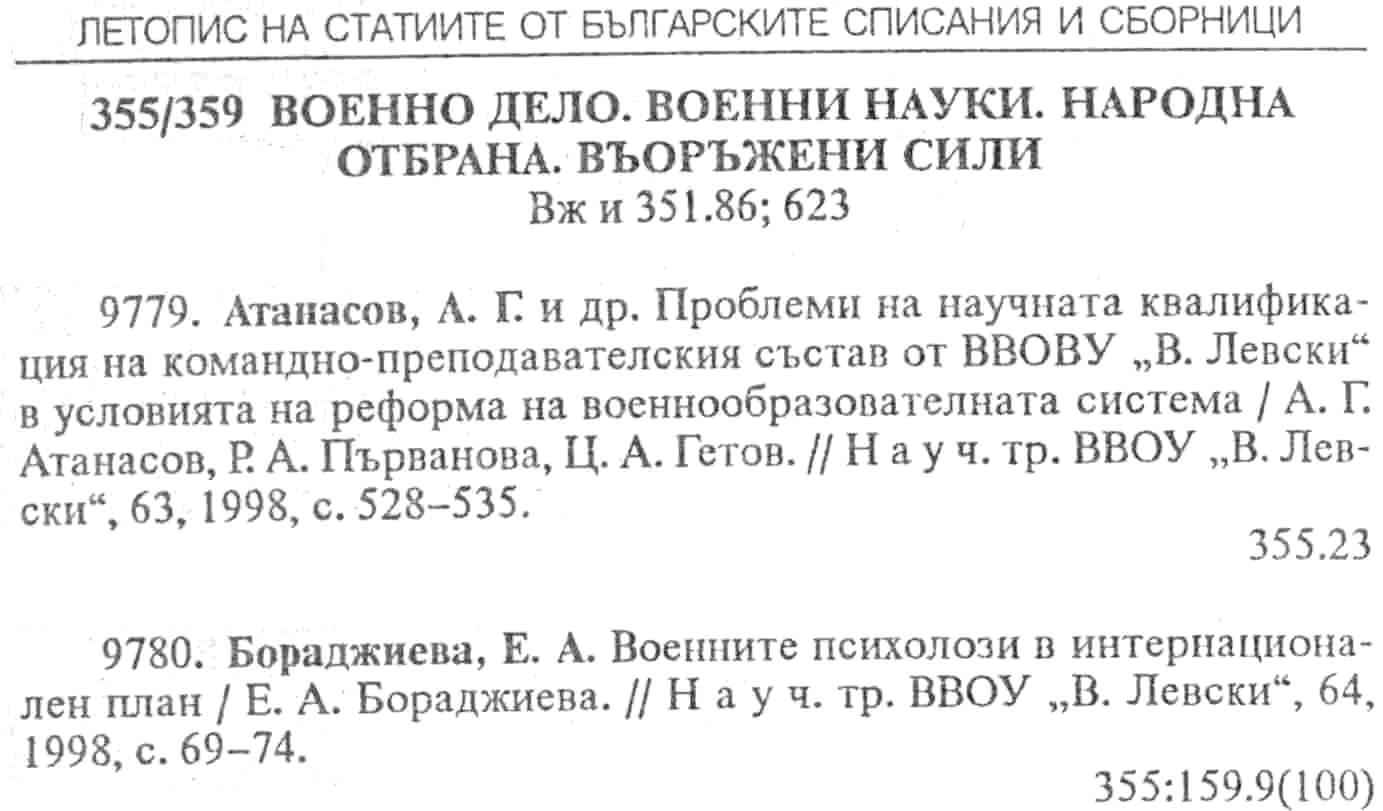 This interesting bibliography supplies information on the contents of various illegal newspapers, journals and bulletins that appeared in Bulgaria from 1918-1944. The entries describe the title and provide bibliographic details, but they also give the contents for the issues. In many instances authors and article titles are supplied, but page numbers are not. The entries are arranged alphabetically by title. There are indexes for party or underground group, places, and names as well as a chronological listing of titles which groups titles by historical time period such as the German Occupation, 1941-1944. See the entry below for the title Istoriko-filolog from 1935.