Particularly important for the 19th century are the Polish catalog by Estreicher, Bibliografia Polska XIX which includes the Ukrainian publications of the Western Ukraine, the Austrian National Library catalog and the catalog compiled by Mezhov listing the publications of the Russian Empire from 1825 through 1878, Sistematicheskii katalog russkoi knig. This source, like Estreicher, has no geographic index, but the entries do include references to reviews as can be seen in the following example from Mezhov’s bibliography:

The entries Mezhov’s catalog are not as complete as can be found in Ukrainian sources such as the Ukrainomovna Knyha 1798-1916. However, it is an alternate source of information that can be useful if your library lacks the Ukrainian sources. Before the 1917 revolution Ukrainian language publications were listed in the Russian national bibliographic publications such as the Glavnoe upravleniia po delam pechati pri Ministerstve vnutrennikh del and Pravitel’stvennyi Viestnik and later in Knizhnaia Letopis.

The period of the revolution and civil war, 1917-1923 are particularly difficult years for the bibliographic record as one would expect. The tremendous upheaval created difficulties for all aspects of life. Record of intellectual activity appears in a variety of sources, many of which are quite rare. It is important to keep in mind that later Soviet compilations were rarely complete for this period.

The Soviet publications also included Ukrainian materials. They are usually listed in Russian making the searches somewhat more complicated. If you are working in a collection that lacks the Ukrainian sources for the 20th century you might use Knizhaia letopis’ or Ezhegodnik knigi up to 1991. Ezhegodnik knigi is probably the easier source of the two to use as it has an index by language.

There have recently been published several catalogs listing pre-Soviet Ukrainian language publications. They are an excellent source of information on Ukrainian publishing history and provide the scholar with the location of the publications, thus making them very useful for planning research trips.

In this list are included titles that attempt to be comprehensive for a particular time period. Many draw on library catalogs and bibliographies for the compilation of their lists. Together, this list is compiled in the hope that it will give the scholar a number of starting points for an overview of Ukrainian publishing.

There have been a number of articles written on this period that can be helpful. In particular see “Bibliohrafija na Ukraini”, Bibliotechnyi zbirnyk, 1927:3 and the bibliography in Bohdan Wynar’s “Ukraine, Bibliography” in Encyclopedia of Library and Information Science, Vol. 31, pp.302-317 as well as “Knizhnaia Palata Ukrainskoi SSSR” in Sorok let Sovetskoi Gosudarstvennoi bibliografii (1920-1960), M.:Vsesoiuznaia Knizhnaia Palata:1960, pp.79-93.

This work is described as the first comprehensive retrospective historical bibliography of Ukrainian publications. While this is not a comprehensive list of Ukrainian publications in general, the broad definition of history used by the compiler has allowed for the inclusion of titles that are of interest not only to historians. Works on folklore, music, religion and other topics are included as well. The first edition appeared in 1853 under the title Opyt ukazatelia istochnikov dlia izucheniia malorossiiskogo kraia v istoricheskom i geograficheskom otnoseniiakh and contained some 275 entries. The 1858 edition had double the number of citations listed in the first edition and included works in Russian and Ukrainian. Complete bibliographic information is supplied for each title with all entries chronologically arranged. Many of the entries are annotated. Unfortunately, the volume lacks an index.

This collection lists all the Ukrainian language books held at the Ukrainian National Library and has union listing for other libraries in Ukraine. The volumes are arranged chronologically, with entries listed alphabetically for each year. The entries are very thorough in the bibliographic information they include, even listing call numbers for each title and published bibliographies that cite the title. Some entries even provide information on the cost of the piece at the time of its publication. However, the explanation of the format is rather sparse with much left unexplained. For example, while many entries have a reference to “Hrinchenko” there is no explanation of the reference. There is also terminology included in the reference that would be difficult for the unitiated. Nevertheless, it is a very useful source for tracking the pre-Soviet publications in Ukraine.

This is a resource covering one of the more difficult periods in Ukrainian publishing history, 1917-1920. During these years of independence, many bibliographic projects were undertaken. This single volume work is representative of the time. This bibliography contains the bibliographic essay by Klaynovych “Litopys Ukrainskoi publikatsii za 1918,” pp. 47-69. It is one of the few listings of Ukrainian language publications for the time. 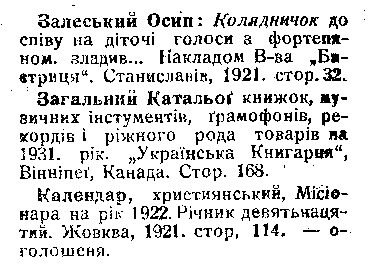 This publication had several bibliographic columns in each issue. Since this was a trade journal directed at publishers much of the content was directed at that audience. However, in the general bibliography list were included all the Ukrainian publications the editors could find record of, whether published in Ukraine or abroad. It is therefore an excellent source for the study of the development of the emigre press during the turbulent years of the Civil War. There is a list of periodical publications as well as monographic publications. The issues also included a list of publishers both in Ukraine and abroad. 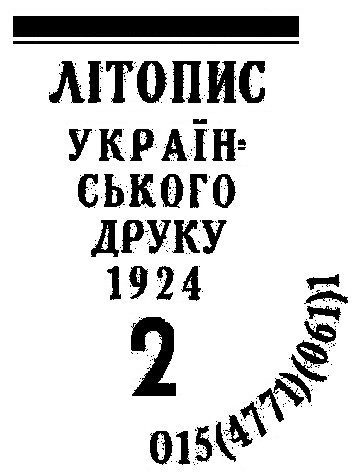 This publication has a systematic arrangement by subject and includes an index of names, titles, subjects, geographic locations, and series titles. Each entry includes full bibliographic information. The bibliography includes all titles published in Ukraine regardless of the language. Initially, the bibliography included citations to periodical publications, music and artistic works. In the 1930s, separate supplements on these topics as well as indexes to serials and newspapers began to appear. These supplements continue today. For detailed information on each click on the title listed below.

A note about some of the other publications of the Ukrainian Book Chamber that chronicle other types of publications. One is of particular importance in tracing the history of publishing in the region.

Periodychni vydannia URSR 1918-1950 lists the periodical publications of the region. There have been supplements to this title appearing somewhat irregularly: Volumes covering 1951-1960, 1961-1975 and 1976-1980 were all published in the Soviet period. The next official compiled list of periodical publications was issued under the title Litopys periodychnykh vydan and began publication in 1996. For current publications the web site at the National library is the best source of current information. The catalog includes some 10,000 titles.The search screen allows a title and subject search as can be seen below.

This publication in part supplements the national bibliography of books. It lists, selectively, Ukrainian language publications issued in the USSR, inside and outside the territory of Ukraine and includes citations to books, periodical and newspaper articles and dissertations. It began publication in 1956 and continued until 1988 with its frequency varying from twice a year to annually. The citations are arranged topically with several indexes for access by author name and periodical title. The bibliography includes works published in the former Soviet Union and other socialist countries about the Ukraine in Ukrainian and other languages.

Two trade bibliographies were also published by the Book Chamber that might be useful for those studying the history of publishing in Ukraine. The first deals with the publishing output in Ukraine and began in the 1960s. The second is a list of new and planned publications. It is primarily a list of forthcoming publications.

This is an excellent publication for tracking the publishing output of a number of publishers in Ukraine. The volume includes books, music, non-periodical literature and posters issued in the territory of Ukraine. The book is divided into sections by publisher. Within each section, titles are listed individually with information on tirazh, price, language and extent. There is no index, only a table of contents arranged by publishers. For the years it was published it provides an interesting overview of publishing in Ukraine.

This bibliography is issued by the Ukrainian Book Chamber as one of two trade bibliographies. Begun in 1958 and issued just three times a year, it continues today, issued three times a month, listing new and forthcoming publications. The publication is organized like Litopys knyh by subject with an author index in each issue.

Bibliographic information for each item is as complete as possible but some things are necessarily lacking, e.g. print run. Many entries include annotations describing the publication more completely as is demonstrated in the citation above. This is a listing for book dealers and it is important to keep in mind that, in some cases, titles listed in this publication may never actually be published.