In the Soviet period, Udmurtiia was given the name Votskaia Autonomous Oblast’ in 1920, and renamed the Udmurt Autonomous Oblast’ in 1932. In 1934, Udmurtiia officially received the status of Autonomous Soviet Socialist Republic (ASSR), and in 1991, it received the title Udmurt Republic, within the Russian Federation. It is located in the Volga Federal District, and its capital is Izhevsk. Udmurt is an Uralic language also referred to as Votiak and Votyak.

This is a beginning guide to bibliographic tools for researchers of Udmurtiia. Though not a comprehensive overview, this guide outlines two primary ways research can access bibliographic information about Udmurt publications:

The electronic catalogs and databases (Elektronnyie katalogi i bazy dannykh) can be searched in both Russian and Udmurt. On the right hand side users can limit their search by the following categories:

On the left hand side users have the option of a basic, advanced or professional search and also have the option to browse by alphabetical listing. In the advanced option users can search by key word, author, title and date of publication, ISSN/ISBN, type of holding, or theme.  An image of the advanced search interface is shown below.

Search results give bibliographic information including: The title, author(s), GRNTI, BBK, rubric, available copies and location of copies of the document. An image of the results is shown below. 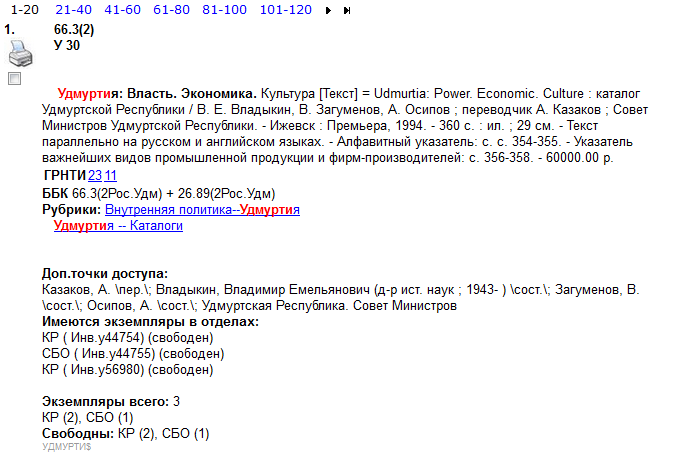 The first Udmurt books appeared in the mid-nineteenth century, but in the pre-revolutionary period, Udmurt writers mostly wrote in Russian. In the Soviet period, there was a strong increase in the number of literary works produced in Udmurtiia, due to Udmurt-language education and the foundation of an Udmurt national press and publishing house. The main publishing house in Udmurtiia is Izdatel’stvo Udmurtiia. It was first created in 1922, under the name Idkniga. It published many materials in Udmurt and Russian that were affordable and accessible to the entire population, and literature by major national writers and poets. In 1931, the name of the publishing house changed to Idgiz (Udmurtskoe gosudarstvennoe izdatel’stvo) and in 1961 it became Udmurtiia. It publishes socio-economic works, literature, children’s books, and regional and popular-scientific works. It publishes 50-70 books per year on a wide variety of subjects.

Letopisi pechati are chronicles of bibliographic data on all items (within particular categories) published in the Republic of Udmurtiia for a given year. There is detailed bibliographic information provided for each publication. Entry information for these materials includes a general classification number given at the beginning of the section, a consecutive entry number, author, title, place of publication, publisher, date, pagination, illustrations, size, serial statement, ISBN or ISSN, number of copies printed, price, government registration number, e.g. [94-1546]; and other necessary bibliographic information for citations. An example of a letopis’ pechati entry is given in the image below.

It is organized through the use of drop down menus, which allow users to explore the content according to document types: books, dissertation abstracts, art editions, music, reviews, articles, Udmurtia in the Russian press and periodicals (journals and newspapers). Underneath each of these headings there are additional subheadings, which makes browsing very convenient. Note that the files are not downloadable and can only be viewed within the website.

The National Library website makes the letopisi pechati for 2010-2018 available to all users (users can switch to a different year by clicking “arkhiv” at the bottom of the list). Through WorldCat, users can find earlier issues of the letopis’ pechati in physical (OCLC accession number 18425327 or 32150202) and electronic form (OCLC accesion number 609865388 or 728065572).

Udmurt is an Uralic language also referred to as Votiak and Votyak. Udmurt language uses the Cyrillic script. The Udmurt alphabet includes several characters that do not exist in the Russian alphabet: Ӝ ӝ, Ӟ ӟ, Ӥ ӥ, Ӧ ӧ, and Ӵ ӵ. Users interested in working with vernacular languages can download a Cyrillic extended keyboard that can be used for Udmurt and many of the other national languages of the Russian Federation.

The electronic library is a collection of of 24,530 digitized documents. All users have full access to these documents and can access them either by using the search interface or by browsing by particular categories. All documents download as PDF files. With the advanced search option, users can search by keyword, author, title, subject, date issued, and whether or not the item includes a file. The advanced search interface is shown below – note that the interface is in English.

Users can also browse according to themes. The major themes and their sub-themes are listed below.

Users can also choose from a list of subjects (on the right hand side of the main page of the electronic library): Udmurt or Russian literature, poetry, prose, Udmurtiia, history, songs, and Udmurt language.
Please note that due to maintenance issues this website may time out – but this can be corrected by refreshing the page.

The Russian National Library’s Department of Literature in National Languages [also known as the Department of National Literatures] of the Russian Federation, Commonwealth of Independent States, and the Baltic countries has reproduced holdings catalogs in microfiche format. The national languages imprints catalogs in microfiche format diffuse most of the difficulties associated with transliteration in the vernacular languages, spelling, forms of entry, and uncertainties with the entirety of the collection. Researchers can access the entire holdings for a specific language at the Russian National Library through the microfiche set, conveniently exporting selected titles via PDF scans. The following scans reflect some of the Udmurt language holdings available in microfiche format. 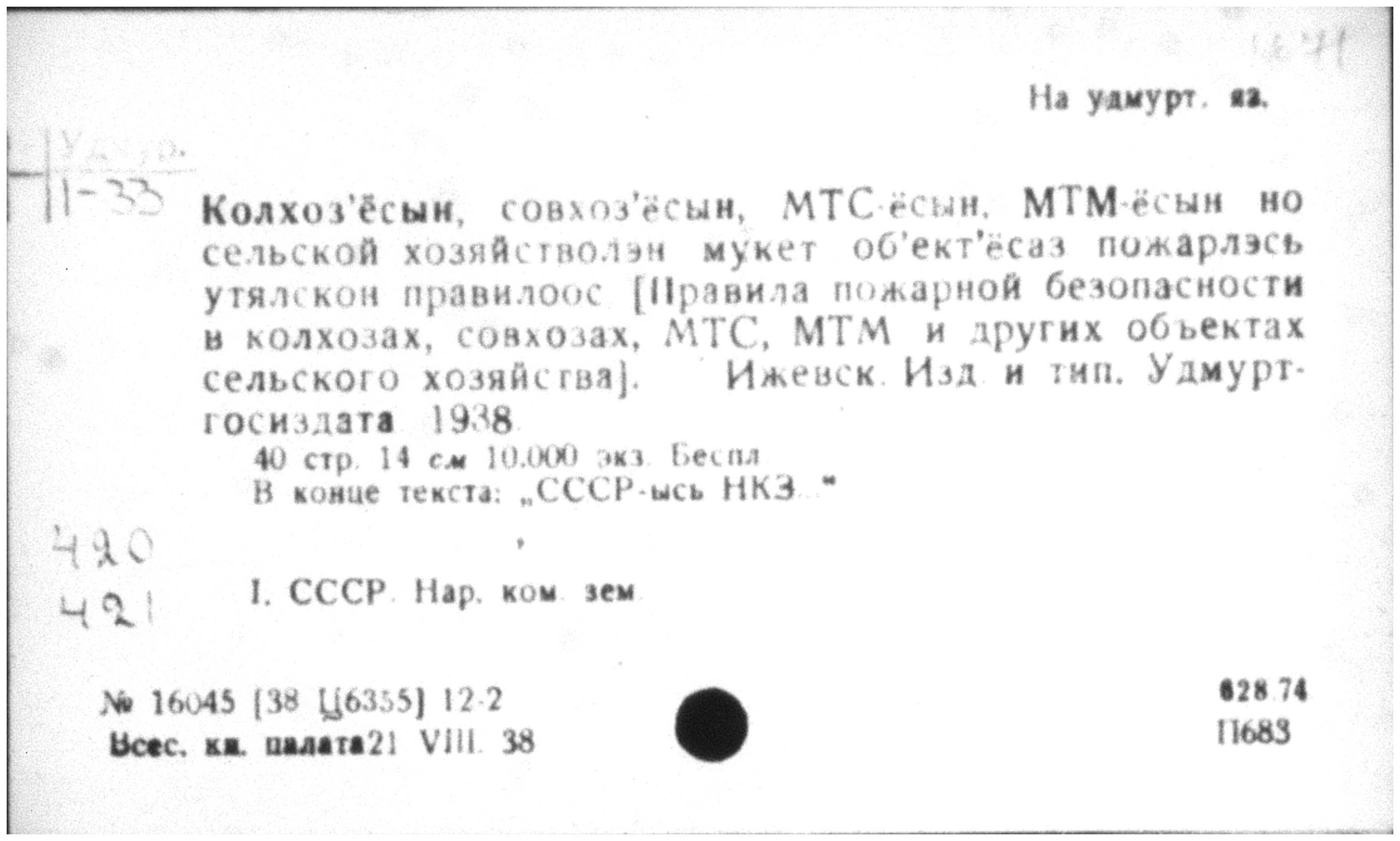 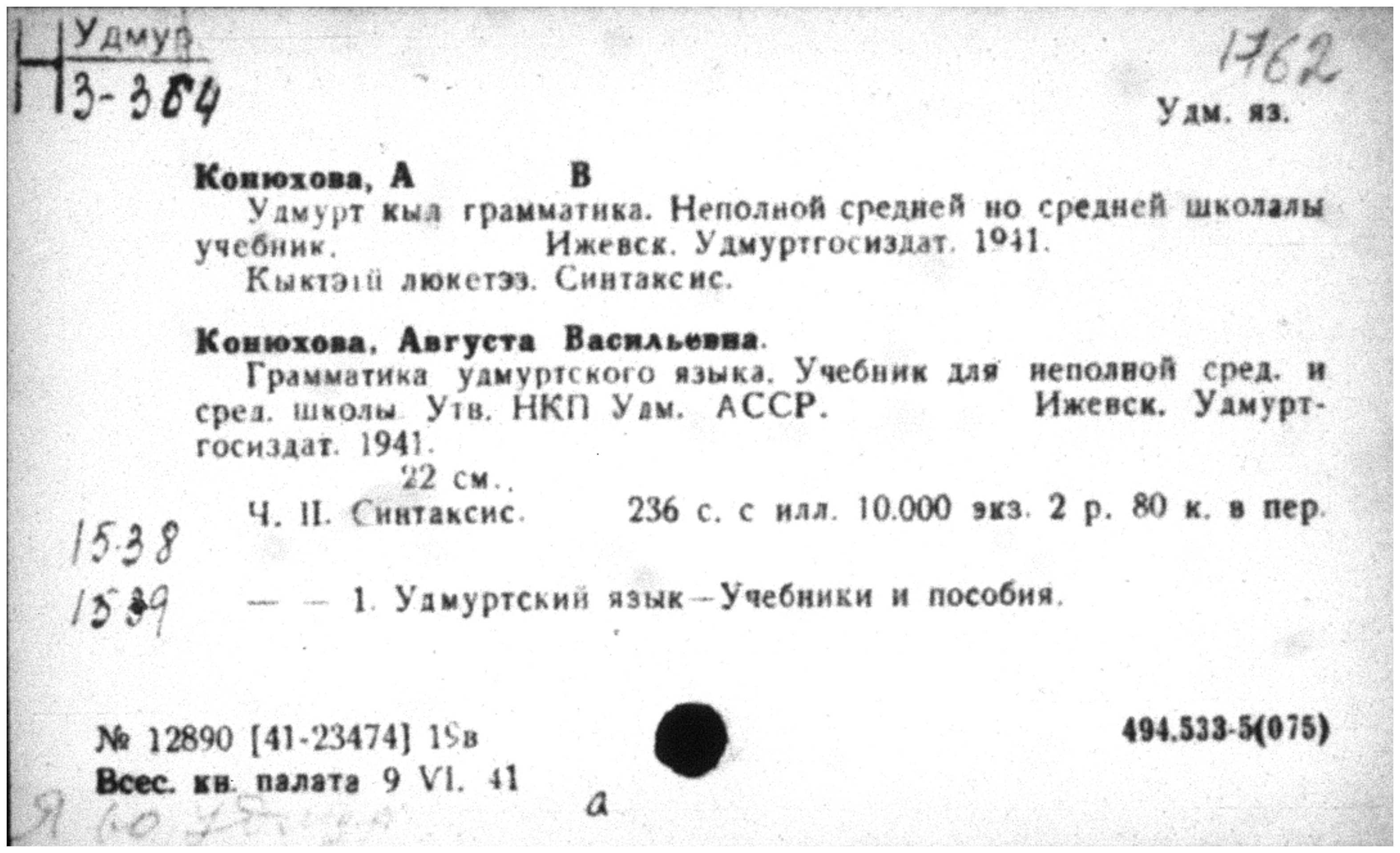 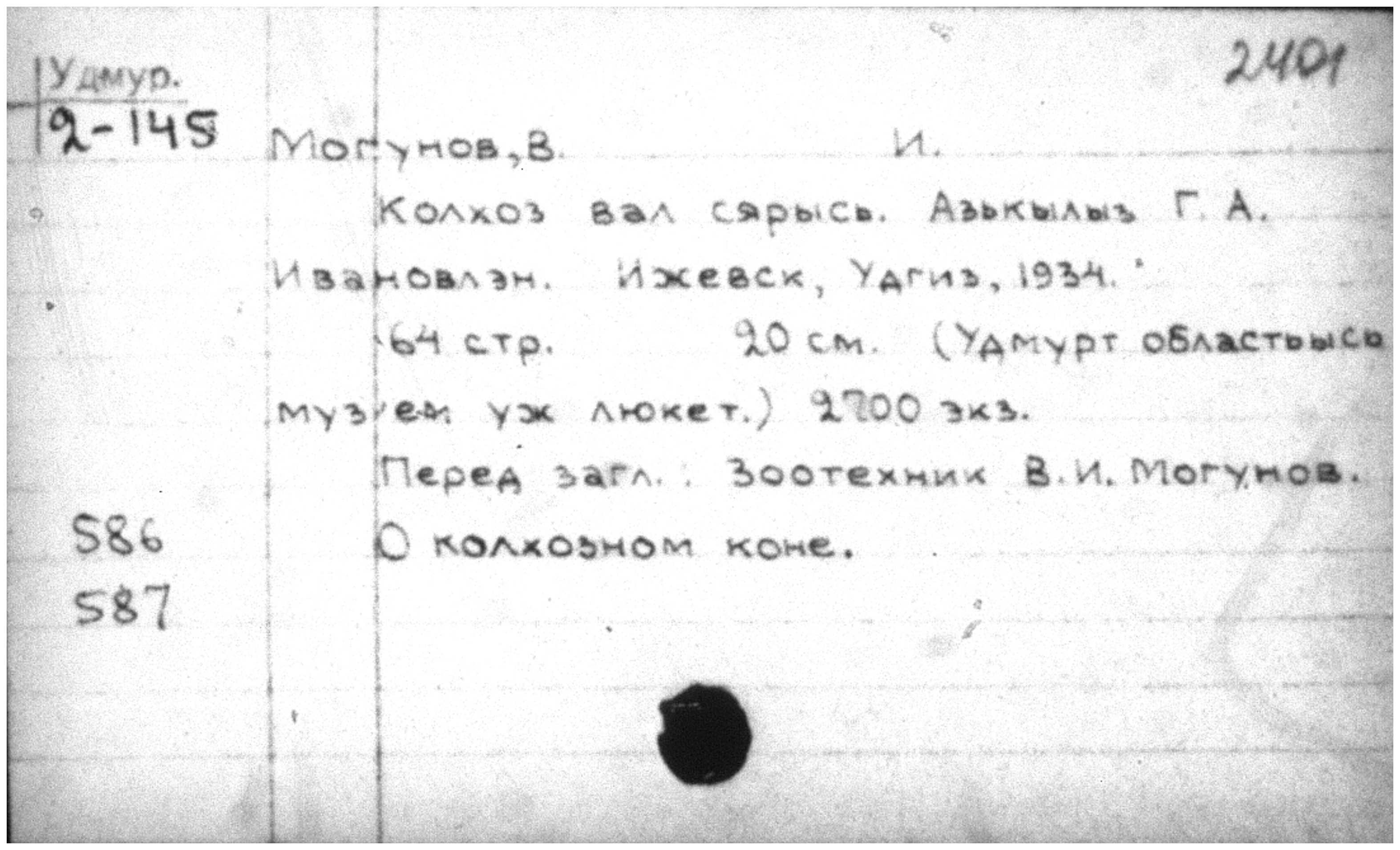 The online platform Finno-ugorskie biblioteki Rossii is a collaborative project of the National Library of the Karelian Republic, the Russian and East European Institute in Helsinki, the Slavic library of the University of Helsinki, and the M. Kastren Society, is meant to make it easier for users to navigate the different Finno-Ugric libraries in various regions of the Russian Federation and in other countries, and to create an electronic collection of publications in Finno-Ugric languages. Users search by geographical area or by names of important figures in Finno-Ugric literature and folklore. For each of the Finno-Ugric language areas of the Russian Federation – Kareliia, Udmurtiia, Komi, Marii El, Mordoviia, Khanti-Mansiisk, Murmansk, and Tver – the website provides links to major libraries and useful library resources, a list with municipal libraries, and an overview of major educational and research institutions. For resources specifically regarding Udmurtiia, users can follow this link.