Bibliographies of the various academies of sciences and matica organizations are presented on the page for Monographic Bibliography for Former Yugoslavia.

For further reading on bibliography in Serbia see the article entitled “Bibliografija” in Enciklopedija Jugoslavije , volume 1 [U of I Library Call Number: International & Area Studies Former Yugoslav Reference (Slavic) 914.97 En16]. There is a section devoted just to Serbia. A more extensive survey of the early history of Serbian bibliography appears in Srpske
bibliografije 1766-1850. A good summary of the history of publishing and current publishing practices in Serbia is Ivana Nikolic’s article “Publishing in Serbia” which appeared in Slavic & East European Information Resources , 1:2/3, 2000, a special issue entitled “Publishing in Yugoslavia’s Successor States.”

The website of the National Library of Serbia has several important online catalogs available for searching such as the main OPAC (online public access catalog) of the National Library which is part of the COBISS system. Another important catalog available at this website is the Katalog knjiga na jezicima jugoslovenskih naroda, 1868-1972 or “Slikovni katalog” which represents the collection of the National Library of Serbia in Belgrade. It covers thousands of monographic titles published between 1868 and 1972 in the various languages of Former Jugoslavia. According to Murlin Croucher’s annotation in Slavic Studies it is “intended as a national retrospective bibliography.” The version available for free at this web site is the scanned version. When you search the catalog, what comes up on the screen is the scanned image of the printed page where the sought after item appeared in the published version of the catalog. You will need to peruse the page to locate the desired record. The only search option is by author, but you can limit by volume number if you happen to know which of the printed volumes you are interested in. Or you can simply chose a volume and not search any author and that will result in displaying the first page of the selected volume. Do not search in Cyrillic fonts, Latin only seems to work. Croatian diacritics make the search more exact, but you can still get by with just regular Latin alphabet fonts. 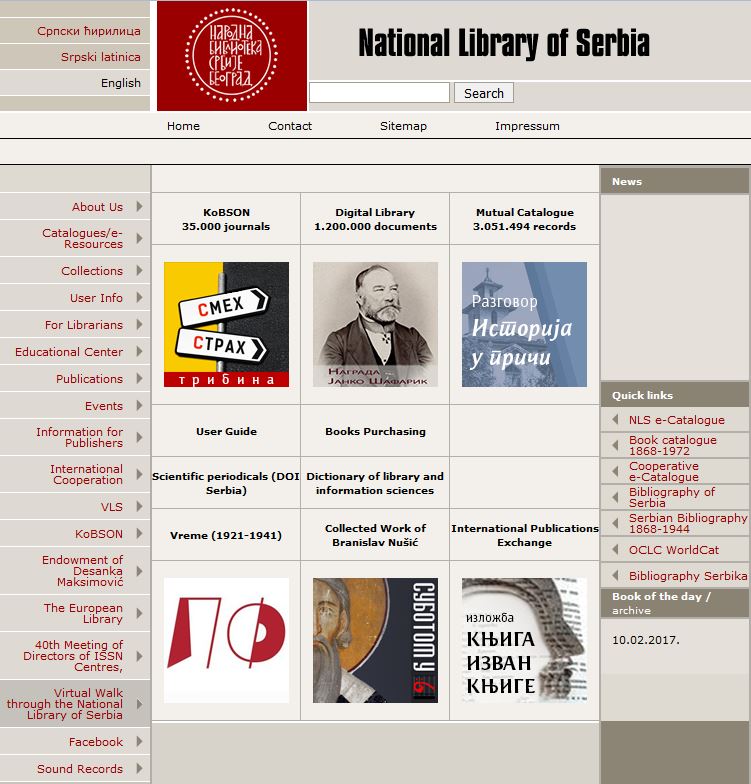 COBISS has a familiar interface to anyone who has searched the catalogs of the countries which were republics of Former Yugoslavia since they all use the same system. See the image below for an example of the COBISS interface. There are beginner, intermediate and advanced search screens that allow for a variety of search options. The user may use Boolean terms and limit by fields, language or type of material. Diacritics are not crucial to searching, but can make the searches more accurate. For example, when searching the surname Cosic, if you use no diacritics you will get not only the records for Cosic spelled with an accent on the first c, but also those for Cosic spelled with a hacek on the first c. Using diacritics will eliminate this overlap. But most of the letters with diacritics are different letters entirely, not the same letter with 2 different marks. Cyrillic fonts work just as well as Latin with diacritics in this catalog. 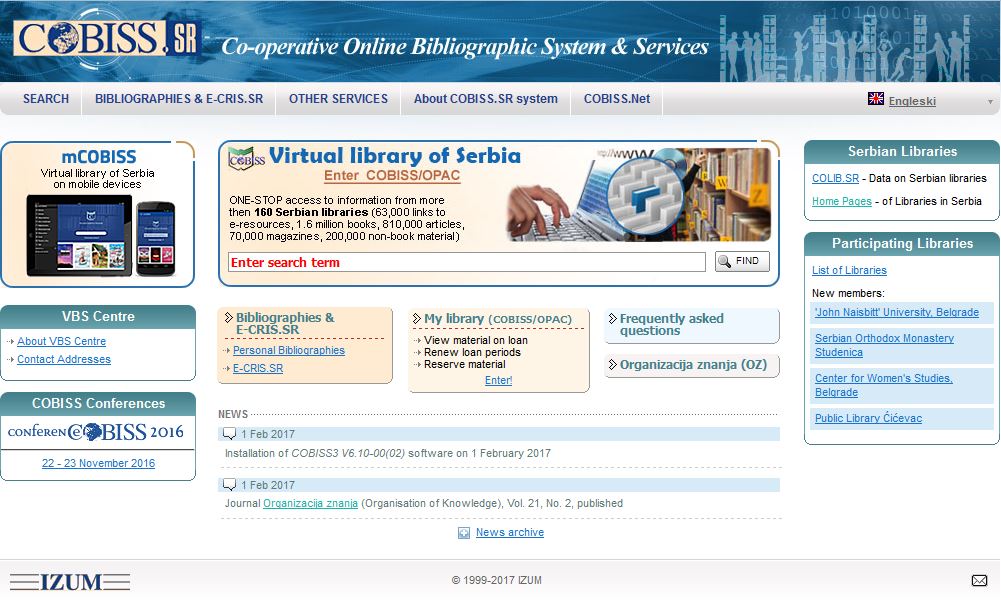 The Digital National Library of Serbia contains more than 1,000,000 scanned pages in about 70 different collections (Cyrillic manuscripts, old and rare books, books, Serbian children’s digital library, newspapers and magazines, cartographic materials, engravings and art material, photographic materials, posters and documentary material, printed music and sound records, catalogs and bibliographies, miscellaneous). The Digital National Library of Serbia also participates in the several international projects such as World Digital Library, with the goal of making Serbian digitized heritage accessible and searchable together with the cultural heritage of other countries. The Digital National Library of Serbia is a partner of the project “Europeana Collections 1914-1918” and as a part of this project has published a thematic digital library Veliki rat (Great War) with valuable collections from the WWI period. 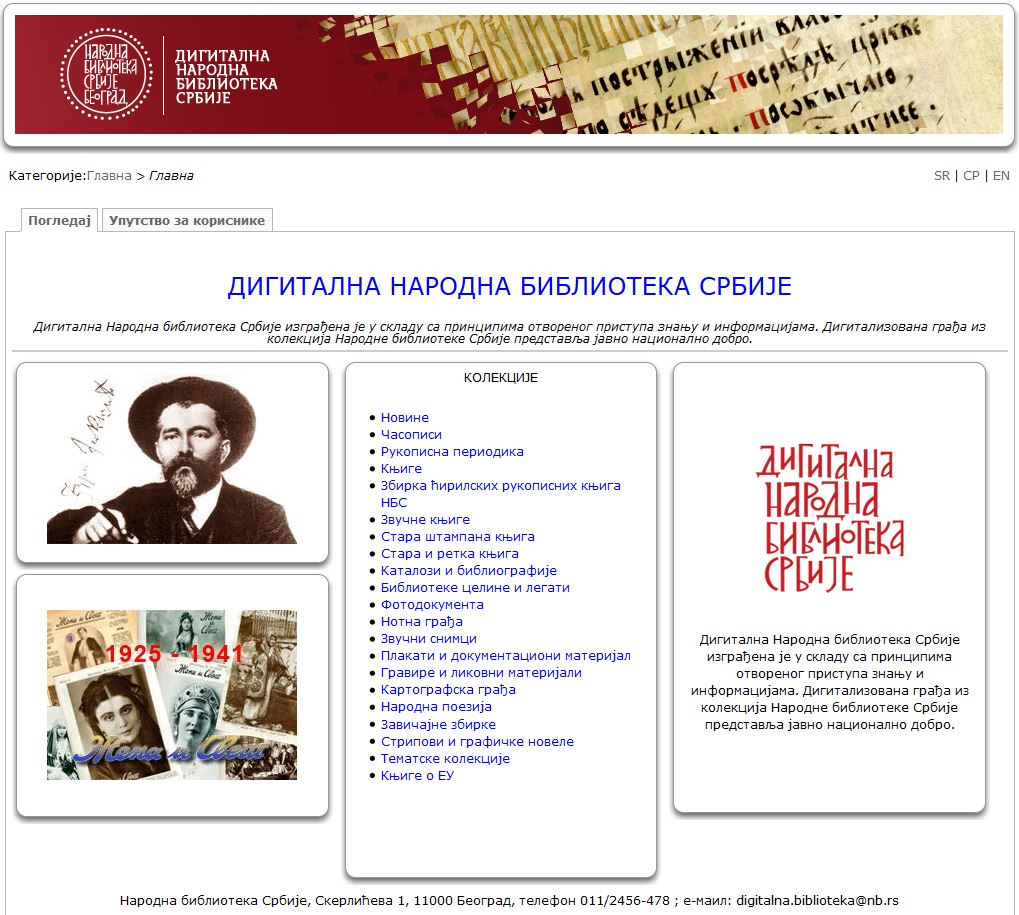 This is a fascinating compilation of over 400 Serbian books from 1701-1800. Mihailovic traveled to various European and Yugoslav libraries and took advantage of several private collections to gather data on the titles presented in this work. In fact, he found more publications than were listed in the previous bibliographies on the topic, including Novakovic, which is glossed below. The entries are arranged by year, with extensive annotations and bibliographic notes. Also reproductions of title pages and bibliographic references for bibliographies in which the item is cited are provided for almost every item. Locations in of libraries in Former Yugoslavia are listed at the end of the entries. It was issued as part of a planned Serbian retrospective bibliography of which only this volume has been produced so far. There is an index for author and title without author. We have xeroxed a list of additions to the bibliography which appeared in the journal Bibliotekar in 1978 and included it at the back of the book. See the entry below for a book that was published sometime after 1741. 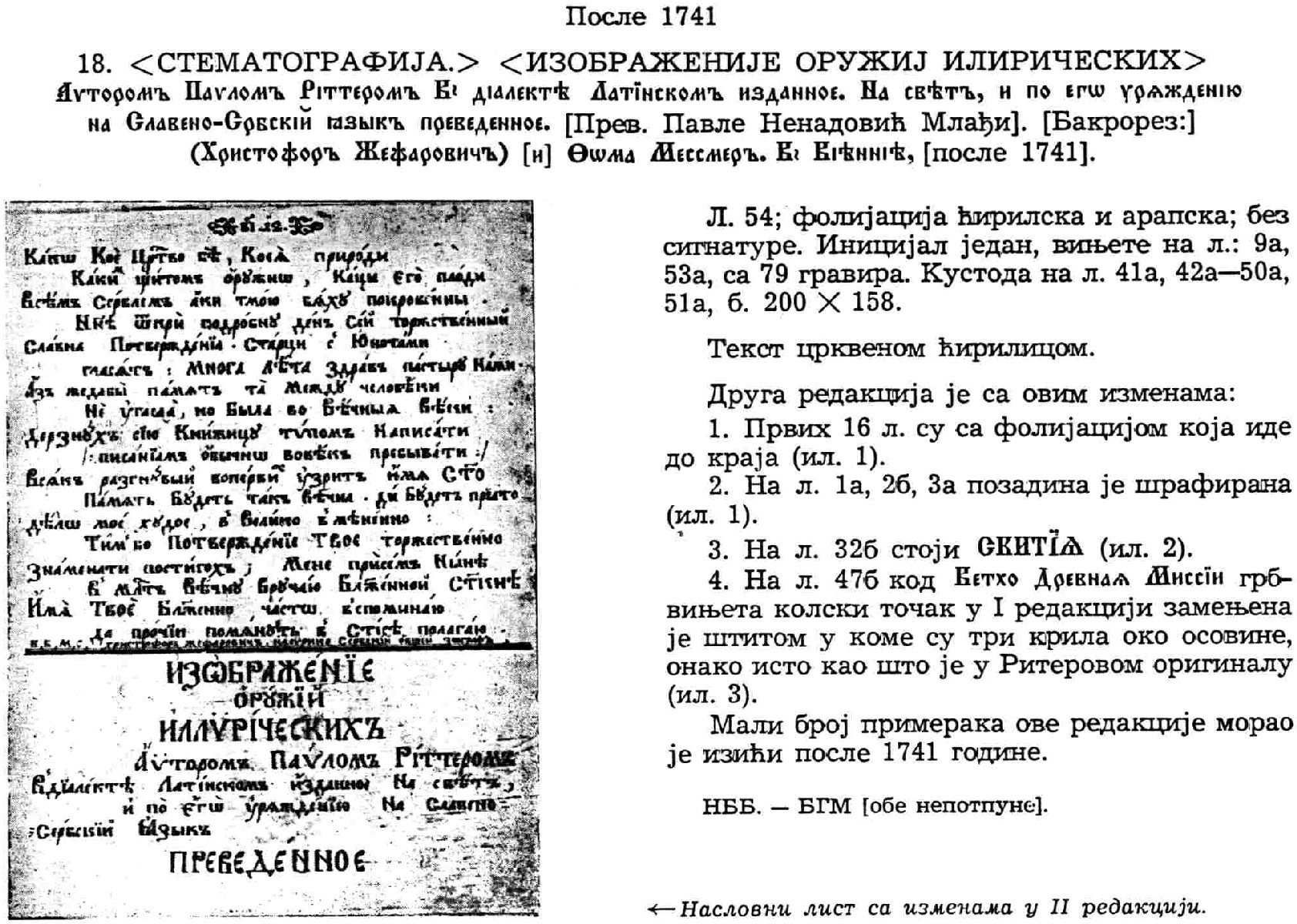 Stojan Novakovic is responsible for compiling this work, the first truly noteworthy Serbian bibliography. It covers Serbian books and periodicals from 1741-1867 which are presented chronologically by publication date. There are almost 3300 entries in this bibliography with indexes for subject, author, title without author, publisher, and historical name. At the end of the book is a table with statistics on the number of items per year. These kinds of figures are always interesting when tracing the development of a particular nation’s publishing output. A number of additions and corrections to this title have been published in various periodicals including Glasnik Srpskog ucenog drustva. See the entry on “Bibliografija” in Enciklopedija Jugoslavije, volume 1, p.505 [U of I Library Call Number: International & Area Studies Former Yugoslav Reference 914.97 En16] for a full list of citations for the additions. The entries for periodicals list only what was published in a given year. See the entry below for a work by Aleksandar Andric from 1845.

Updates by year to Novakovic ‘s famous bibliography appeared in the following volumes of this title: knj. 26, 27, 31, 35, 40, 41, 44, 46, 57, 59, 61, 65. The updates cover both Serbian and Croatian books, annuals, and some periodicals for the years 1869-1878 and 1883-1884 . Additional supplements to the bibliography and updates are found in Letopis Matice Srpske (Main Stacks 506 MAT), knj. 113, 118, 119, 120, 165. Each supplement lists publications by year. (U of I lacks knj. 113 and 120) with entries arranged alphabetically by author or title. Stojan Novakovic himself compiled the additions for some of the years and Dragutin Posnikovic did the remaining years. Until the retrospective bibliography of Serbian books is completed, these updates remain important sources of bibliographic information for Serbian imprints. See the image below for an entry from v. 27.

Although the author intended for his book to serve antiquarians and librarians and did not intend to construct a comprehensive bibliography, nevertheless this work which covers Serbian titles from 1741-1941 can be useful in the absence of a completed, comprehensive retrospective bibliography of Serbian titles. Besides books, some series and periodicals are listed. Part 1 is books published in Yugoslavia; Part 2 is books published about Serbia (and other parts of Yugoslavia) outside of Serbia. At the back are lists of periodicals and series with their dates of publications and analyzed titles. No other indexes are provided. Some reproductions of title pages are included as illustrative materials. See the image below for several citations by Jeremija Karadzic.

This two-volume catalog of the library of the Serbian cultural institution Matica Srpska covers in over 4700 entries books and pamphlets from 1494-1880 . Volume 1 includes imprints from 1494-1847, while volume 2 covers 1848-1880. This set is included here because it is still useful as a tool for national bibliography since the complete retrospective bibliography of Serbian imprints which was mentioned in the introduction above is still not finished. Of course, all library catalogs represent the holdings of just one institution and thus are not comprehensive. Books are listed by year of publication with an author index to facilitate access. At the end of the second volume there is a list of additions to the catalog. Even though the title page states that it covers only books, some periodicals are included. See the first two entries listed under 1871.

Although some of the works listed in the file for National Bibliography of Former Yugoslavia cover the time period of 1947-1948 , these two volumes are specifically on Serbian books and periodicals . They represent what was received by the National Library in Belgrade and were an attempt to fill a gap in national bibliography that existed at that time. It is arranged by subject with a separate section for various types of periodicals. The entries for books and annuals not only provide bibliographic citations, but also pagination, original price and print run figures. The 1948 volume has an author index, but does not have the newspapers or serials section. The 1948 volume also has a much longer introduction which offers a brief survey of publishing in Serbia in 1948. See the image below an entry in the 1947 volume under the heading of weekly newspapers. 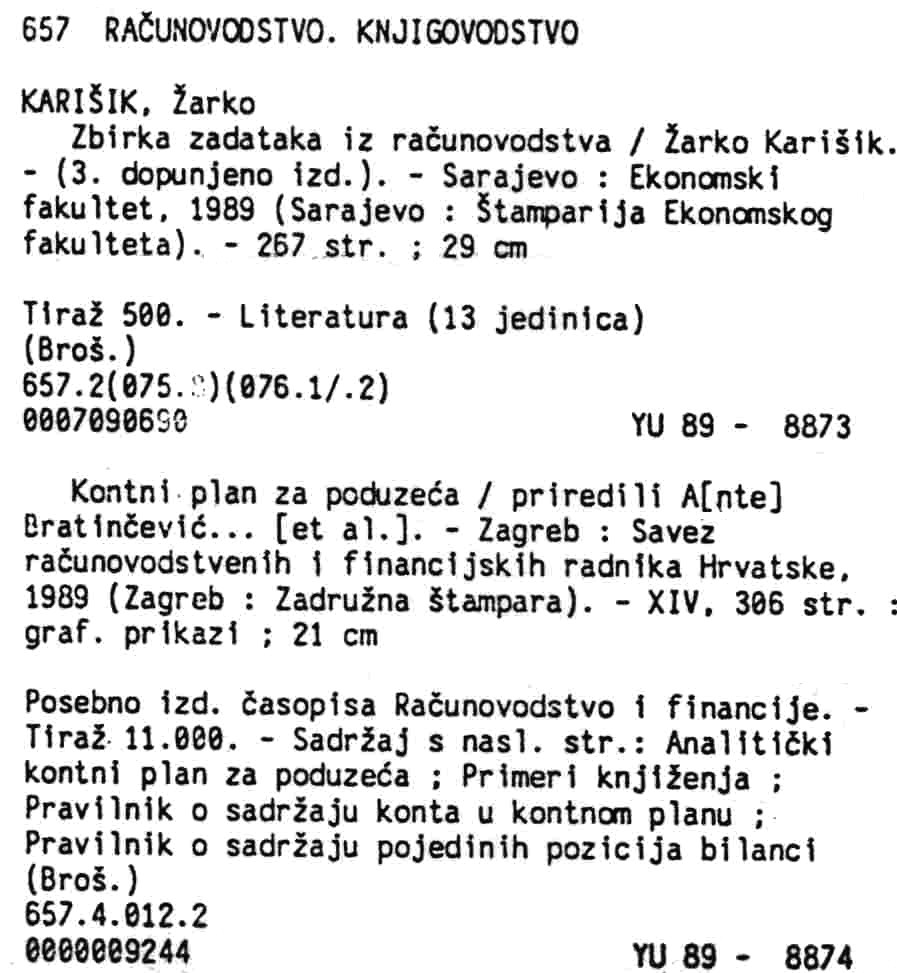 This title is the official national bibliography of Yugoslavia from 1950 to the disintegration of the country in 1991. Although Yugoslavia no longer exists, this bibliography continues to appear , but listing only the publications of the areas remaining in the country (Serbia, Montenegro, Kosovo, and some parts of Bosnia). See the appropriate pages for the national bibliographies of the new countries of Croatia, Slovenia, Bosnia/Hercegovina, and Macedonia. It covers books, pamphlets and music published in any language on the territory of Yugoslavia, but all of the citations are reproduced in the Latin alphabet regardless of the original alphabet of the title. This serial appears monthly and is arranged by subject. The list of subjects is printed at the back of each issue. Each issue also has indexes for names, subjects, and titles. Annual cumulative name, title, and classified subject indexes also are published. In some issues there were even indexes to show which titles were published in which republics including non-republic regions such as Vojvodina and Kosovo. See the entries on the right for two items that appeared in the 1989:19-20 issue under the heading of Accounting and Bookkeeping.