This is a beginning guide to bibliographic tools for researchers of Marii El. Though not a comprehensive overview, this guide outlines two waysin which researchers can access bibliographic information about Mari El publications:

The S.G. Chavain National Library of the Republic of Marii El has several online catalogs on its website that users can use to search the library’s collections:

All catalogs have the same interface, in which users can search by author, title, keyword, place or date of publication, BBK index number, and document type. The search results are provided as a list of bibliographic entries. The picture below shows the interface of the main catalog:

The Russian National Library’s Department of Literature in National Languages [also known as the Department of National Literatures] of the Russian Federation, Commonwealth of Independent States, and the Baltic countries has reproduced holdings catalogs in microfiche format. The national languages imprints catalogs in microfiche format diffuse most of the difficulties associated with transliteration in the vernacular languages, spelling, forms of entry, and uncertainties with the entirety of the collection. Researchers can access the entire holdings for a specific language at the Russian National Library through the microfiche set; conveniently exporting selected titles via PDF scans. The following scans reflect some of the Hill Marii- and Meadow Marii-language holdings available in microfiche format. 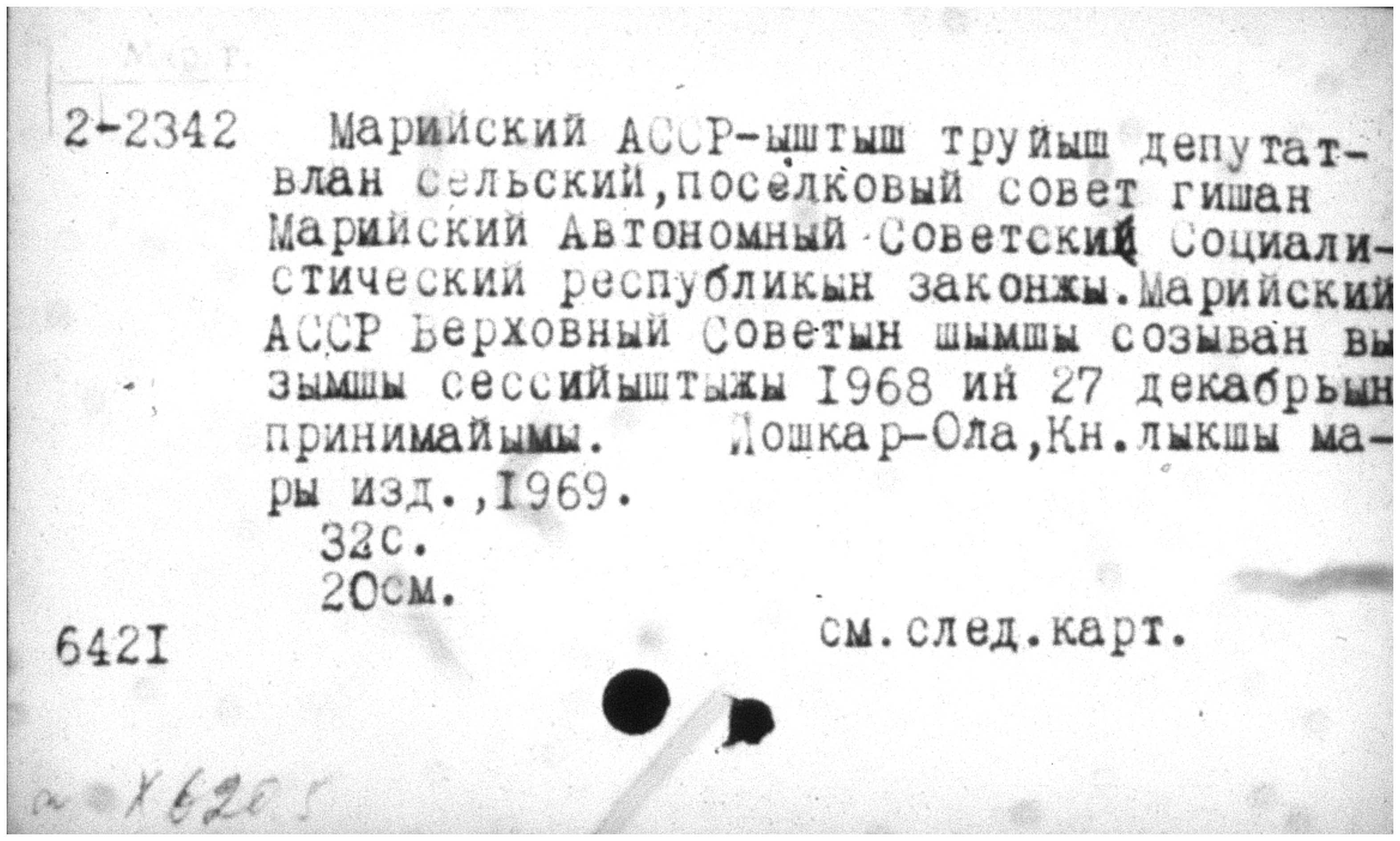 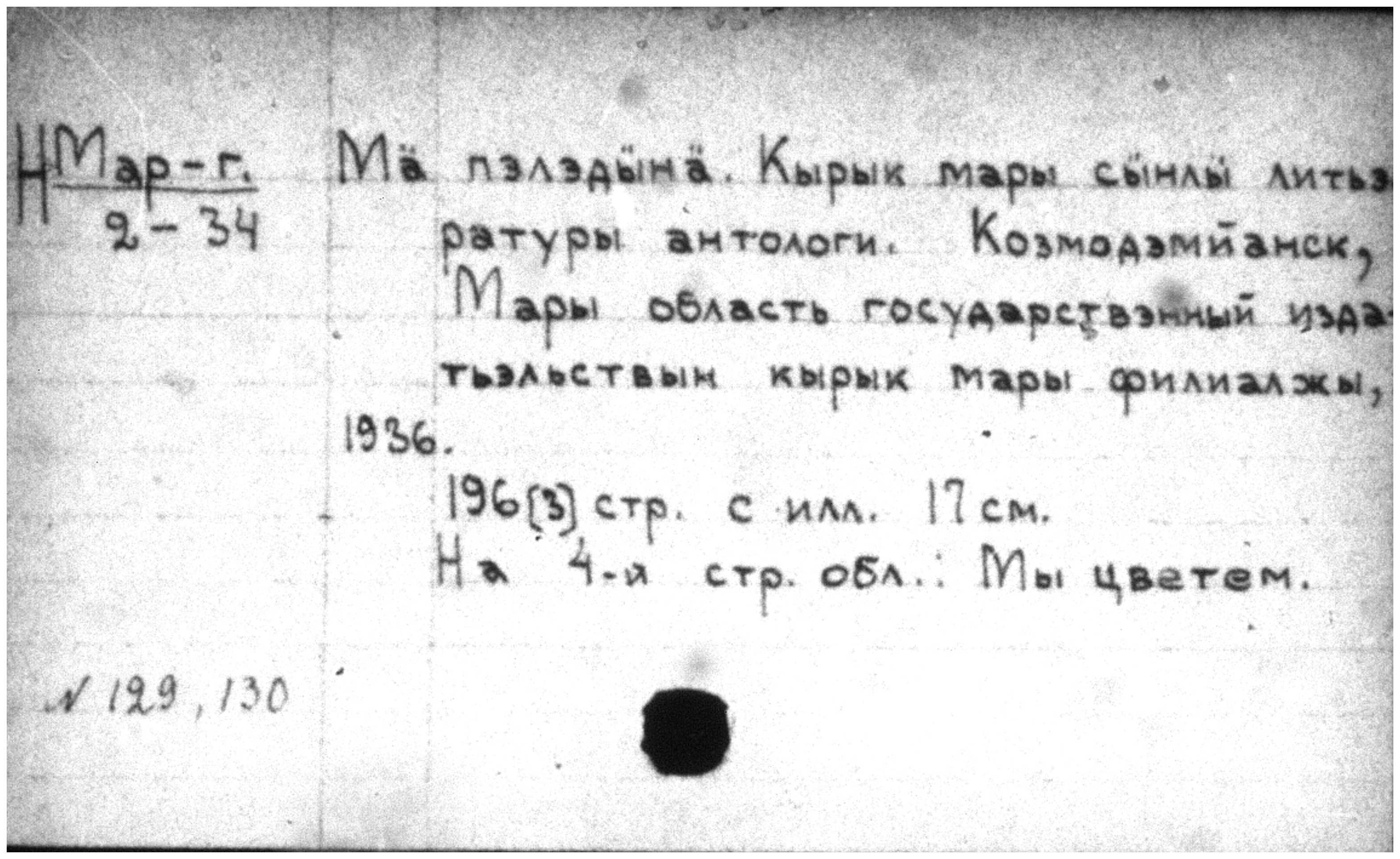 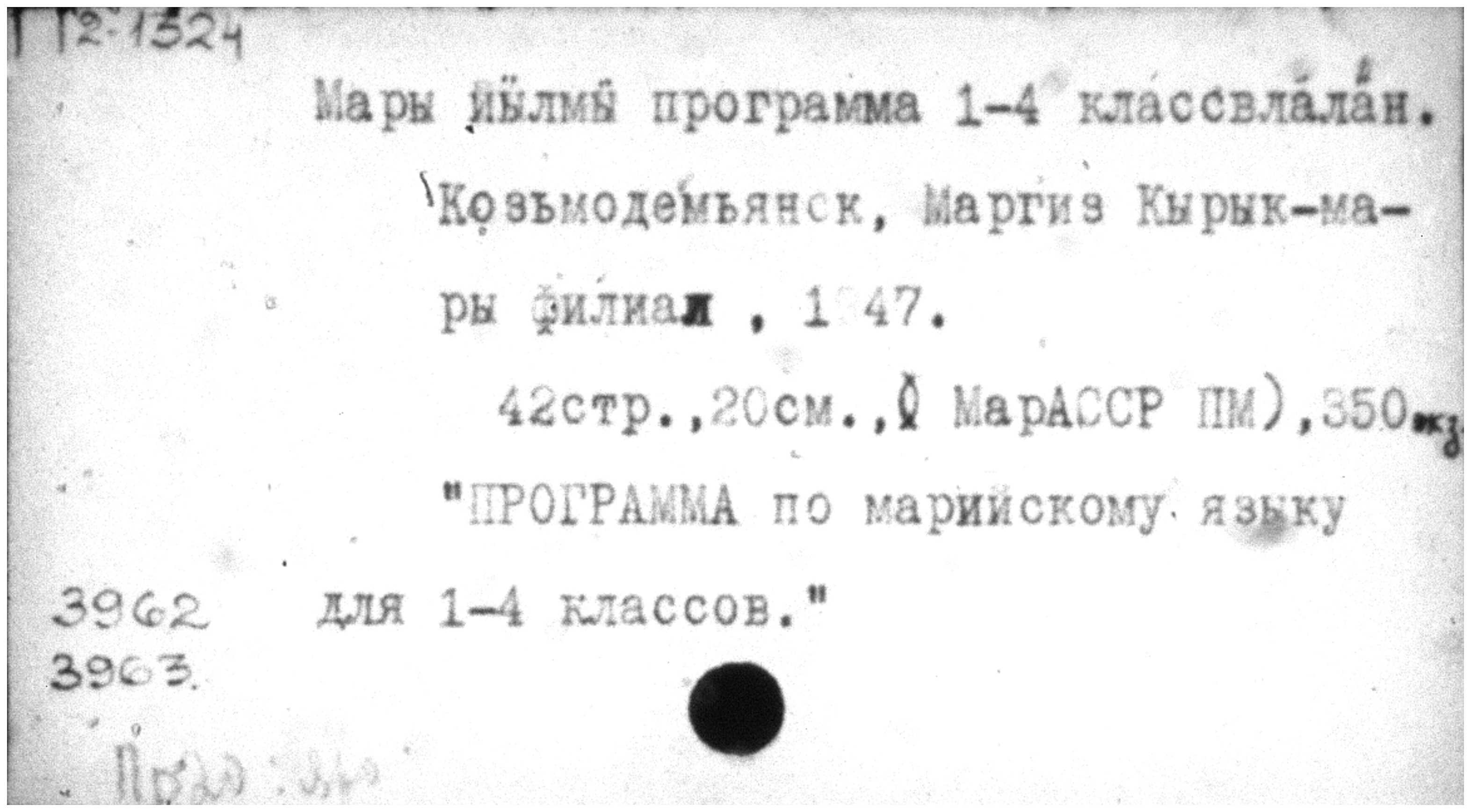 In Marii El, the S.G. Chavain National Library fulfills the role of Book Chamber for the republic. The Book Chamber is responsible for creating a national bibliography and an archive of materials published in Marii El, to secure the preservation of the Marii cultural heritage. The creation of the national bibliography of Marii El began in 1959. This was also the year when the first bibliographic guide letopis’ pechati Respubliki Marii El was published, and the first efforts were made to create an archive for local publications. In 1986, an official Department of National Bibliography was founded, and in 2008, it became part of the Book Chamber of Marii El. The Book Chamber of Marii El continuously exchanges bibliographic materials with other Book Chambers and departments of National Bibliography in the Volga-Urals region and Finno-Ugric republics. Each year, approximately 4,000 new items are added to the archival collection of publications in Marii El, including 600 books and pamphlets, 3,100 newspapers, and 100 journals. The collection of the literature in Marii languages contains more than 25,000 publications. The National Library’s catalog of local history (“kraevedcheskii sistematicheskii katalog”) is the most comprehensive overview of materials produced in the republic of Marii El. Users interested in learning more about Marii El’s Book Chamber, national bibliography, and rare books divisions can follow this link to the National Library’s website.

In 1971, 110 books and pamphlets (905,000 copies), nine journals (191,000 copies per issue), and 29 newspapers were published in Marii El. The following is a list of select newspapers as well the starting date of publication and the language of publication: Mari kommuna (1918) in the meadow dialect of Marii; Mariiskaia pravda (1921) in Russian; Molodoi kommunist (1934) in Russian; Jamde lii (1933) in the Meadow dialect of Marii; Onychko (1954) in the Meadow dialect of Marii; Pachemysh (1957) in Marii and Russian; and Politicheskaia informatsiia in Marii and Russian. Users can consult Gazety SSSR 1917-1960: Bibliograficheskii spravochnik 5 for a list of newspapers published in Hill Marii and Meadow Marii during these years. (Source: The Great Soviet Encyclopedia (Volume 15, page 471))

One of the main research institutions of Marii El is the Mariinskii nauchno-issledovatel’skii institut iazyka, literatury i istorii im. V.M. Vasil’eva. It was founded in 1930. On the institute’s website, users can find overviews of the projects of its different departments – Linguistics, Literature and Folklore, History, Archeology, Ethnology, Sociology, and Finno-Ugric studies – as well as lists of the institute’s publications. Under “Izdaniia instituta”, the website provides a comprehensive bibliographic list of all the institute’s publications between 1931-2017.

The platform “Finno-ugorskie biblioteki Rossii” is a collaborative project of the National Library of the Karelian Republic, the Russian and East European Institute in Helsinki, the Slavic library of the University of Helsinki, and the M. Kastren Society. The goal of the project is to make it easier for users to navigate the different Finno-Ugric libraries in various regions of the Russian Federation and in other countries, and to create an electronic collection of publications in Finno-Ugric languages. Users can search by geographical area or by names of important figures in Finno-Ugric literature, history, and folklore. For each of the Finno-Ugric language areas of the Russian Federation – Kareliia, Udmurtiia, Komi, Marii El, Mordoviia, Khanti-Mansiisk, Murmansk, and Tver – the website provides links to major libraries and useful library resources, a list with municipal libraries, and an overview of major educational and research institutions.

The Marii written languages, since their development in the eighteenth century, have always been based on the Cyrillic script. The alphabet of the Hill Marii language includes several letters that do not exist in the Russian alphabet: Ӧӧ, Ӱӱ, and Ӹ ӹ. The alphabet of Meadow Marii includes the letters Ҥҥ, Ӧ ӧ, and Ӱ ӱ. Users interested in working with vernacular languages, can download a Cyrillic extended keyboard that can be used for Hill Marii and Meadow Marii and many of the other languages of the Russian Federation