Publishing and Bibliography in Latvia

The history of printing in Latvian can be traced back to the 16th century, with the appearance of a multi-lingual German Mass in 1525 and the establishment of Riga’s first printing shop in 1588. Until the 18th century, the majority of texts in Latvian were religious in nature; however, that started to change with the publication of the first Latvian journal in 1797. Latvian printing really took off in the 19th century, with the publication of as many as 200 titles in Latvian per year by the 1880s (Riekstinš, J.V., 1977).

After the incorporation of Latvia into the Soviet Union, in 1940, the Latvian Bibliographic Institute took over the production of national bibliography with its monthly publication, Latvijas PSR preses hronika (Pilch, 2002). Bibliographic projects were tasked with keeping up with the enormous growth of publications in Latvia. For example, in 1940, 392 books, 21 newspapers, and 35 journals were published in Latvian. By 1972, that number had grown to 2,591 books, 114 journals, and 78 newspapers (Riekstinš, J.V., 1997). The Latvian Bibliographic Institute continued to publish their bibliography, renamed the Latvijas preses hronika , after the disintegration of the Soviet Union in 1989. In 1993, the Latvian Bibliographic Institute was absorbed by the National Library of Latvia (Pilch, 2002). The mission of the national library is broad in scope. However, the production of national bibliography is identified as the library’s “main concern.” After 2006, the bibliographic activities of the National Library transitioned from print to electronic format. Current and retrospective bibliographic information is available through its electronic database of monographs and serial publications (National Library of Latvia, 2014). 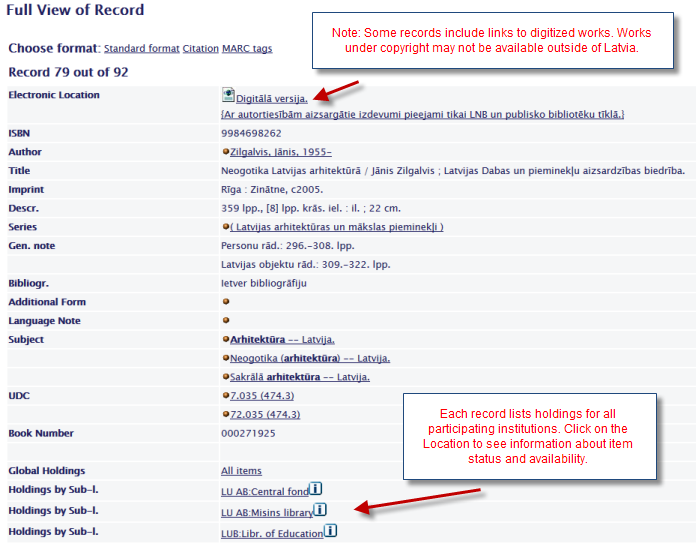 Electronic Catalog of the National Library of Latvia

This electronic catalog includes descriptions of items held by the Latvian National Library. Electronic records are available for all items, regardless of year of publication, added to the collection since 1990 (Latvian), 1996 (Foreign Language), or 2000 (Russian). The catalog is updated regularly with records for the most-often requested materials in the library, but is not comprehensive for materials obtained prior to 1990. Users interested in these materials may refer to the scanned card catalogs available on the Latvian National Library website. The search interface and catalog records are identical to the Union Catalog (described above).

This scanned card catalog represents the Latvian holdings of the Russian National Library until roughly 1998. The catalog is made up of 137 microfiche reflecting roughly 79, 460 items arranged alphabetically by author. You can see a sample of several entries from the catalog below. Please be advised that the quality of some of the scans is poor. 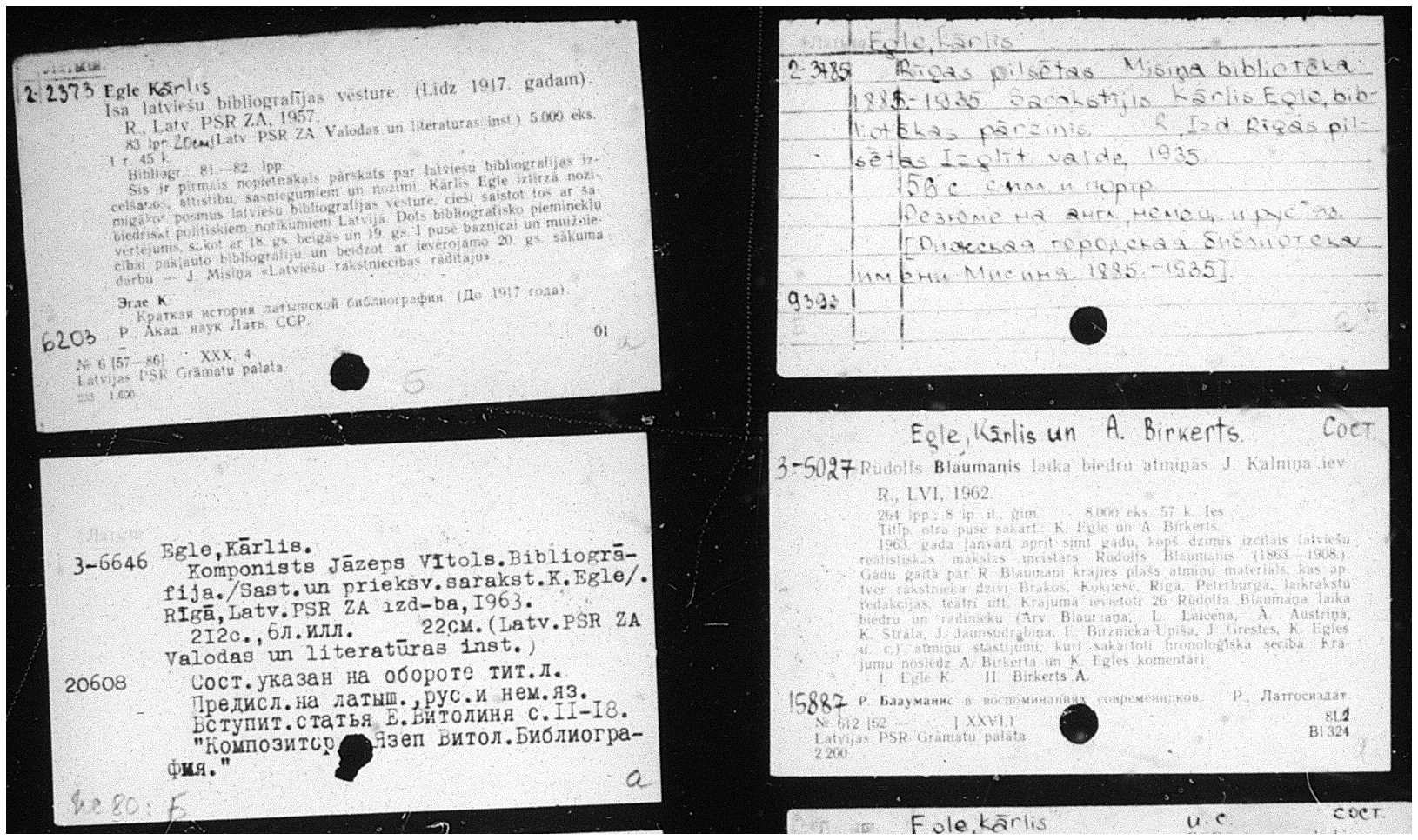 Scanned Card Catalogs at the National Library of Latvia

The National Library of Latvia has made available several scanned card catalogs reflecting their foreign language holdings. Separate catalogs are available for English, German, Russian, and French books with an additional catalog for materials in other languages. Also available are scanned catalogs of sheet music and Latvian historical place names. These catalogs provide coverage until 2000, after which time entries become available through the electronic catalog. Below is an example of the interface and one of the cards from the German-language catalog. 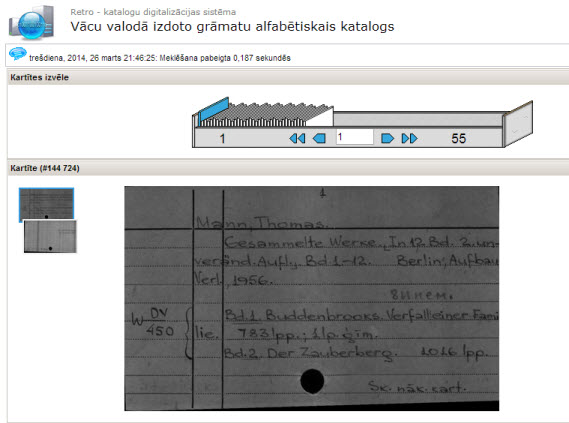 This database is the electronic version of the Latvian National Bibliography ( Latvijas preses hronika and its predecessors). It contains information about all books published in Latvia from 1585 to the present. Since 1940, it includes descriptions of books about Latvia and Latvians published outside of the country and, since 2000, descriptions of serial publications. Starting in 2006, the database includes information about preprints and entries from 2009 to present include supplemental information, such as cover images and tables of contents.

This series continues the Soviet period bibliography Latvijas PSR preses hronika. Like its predecessor this series is divided into one subseries on books, music and videos and a second on periodicals and reviews. The issues are organized by subject classification and each includes an author, title and ISBN index. The national bibliography includes Cyrillic publications as well as those in Latin characters. As one would expect, even the smallest publications are included here. 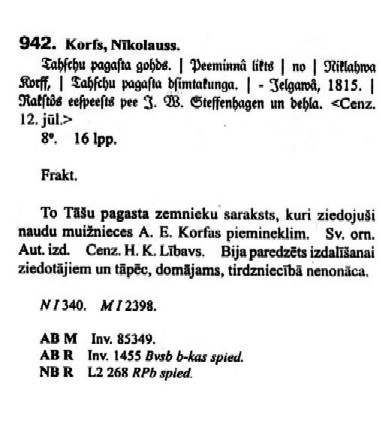 As can be seen from the record above, the title is given in Fraktur and in modern Latvian with complete information including the date of censorship. It may be interesting to compare this entry with that found in Misins (shown below). The entries also include references to bibliographic entries in other sources for the same title. Thus the “M. I 2398” in the record refers to Misins, volume I, entry no. 2398. Similar entries can be found for such sources as Napiersky’s Chronologischer Conspect der Lettischen Literatur, Estreicher’s Bibliografia polska and many other sources. The bibliographies consulted are listed in the opening pages of the volume.

In general, the bibliography is arranged chronologically. There are several indexes to facilitate access: title, subject, personal or organizational name, publisher and geographic. The volume concludes with some 60 pages of illustrations adding to the wealth of bibliographic data available from this resource.

Misins 1924 publication is considered by many to be the first serious attempt at retrospective national bibliography for Latvia. The original catalog has recently been expanded by a two volume supplement covering the years 1585-1919. Misins original two volume work covered the years 1585 to 1925. As tremendous a work as this was, it was based on Misins personal library and, thus, could not be comprehensive. Nevertheless, it is an enormous accomplishment.

The entry above is typical of the information found in the catalog. The catalog is arranged by subject and includes an author and title index for each of the original volumes. While Misins intended to publish a third and fourth volume to his bibliography that would have included periodical titles, the work was never completed.

The recently published supplementary volumes extend Misnis original work by adding legally and illegally published titles, as well as ephemera of 5 pages or more. These include the publications of societies, government regulations, bookdealers catalogs and pricelists. Books in the Latgallian dialect which were omitted from Misnis original work have been included here. The arrangement in the supplement is somewhat different than that found in the original. Entries here are arranged alphabetically by author. The compilers have also included titles identified in the Helsinki University Library catalog of Lettonian collections.

This was independent Latvia’s first bibliography. Serially published, the bibliography was a list of new publications issued in Latvian territory, regardless of language, arranged in a classified list. A systematic index was published annually of authors and headings. As can be seen from the entry shown above the individual titles were fully described with all series information included. The bibliography included ephemera with records in the list for items of only a few pages. There were even listings for concert programs.

Available at the National Library of Latvia. Record number: 000376513

This was a quarterly publication issued during the Soviet period. The publication is described by Pilch (SEEIR, 2001:2(3/4)) as “listing books, music, printed graphics and periodicals.”(pp.75-76) The title is not held at the University of Illinois and thus could not be examined de visu.

This title continued the Preses hronika cited above. This later title was issued monthly and listed books, music, graphics and periodical publications.