The Kalmyk Autonomous Oblast’ was created in 1920, and in 1992, it was granted the status of Republic of Kalmykiia within the Russian Federation. Its capital is Elista. The official languages in the republic are Kalmyk and Russian. Kalmyk is a Mongolic language.

This is a beginning guide to bibliographic tools for researchers of Kalmykiia. Though not a comprehensive overview, this guide outlines three primary ways researchers can access bibliographic information about Kalmyk publications:

The electronic catalog (elektronnyi katalog) has no information about its coverage, but is assumed to reflect the holdings at the National Library of the Republic of Kalmykiia. Users have the option of the basic, advanced and professional searches. Under the advanced option they can search by document type, author, title, serial, BBK, key word, ISSN, ISBN, collection and other search terms. Users can also organize the results by title, author and other identifiers. 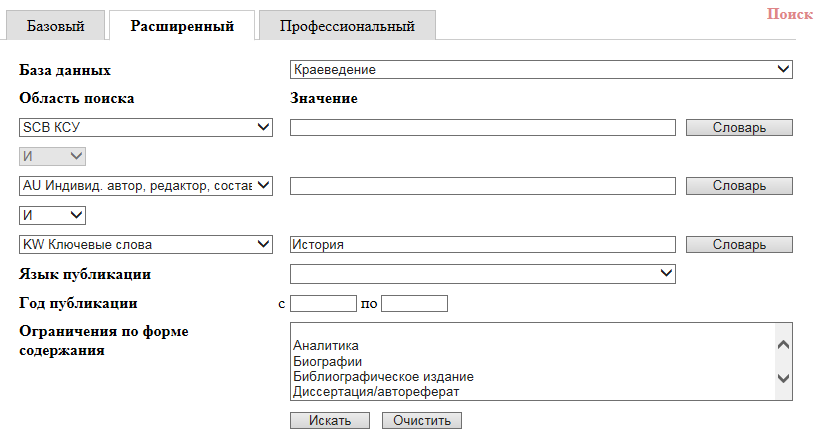 The results give basic bibliographic information as well as information about the location and availability of specific holdings. Sample results are shown in the image below.

The Russian National Library’s Department of Literature in National Languages [also known as the Department of National Literatures] of the Russian Federation, Commonwealth of Independent States, and the Baltic countries has reproduced holdings catalogs in microfiche format. The national languages imprints catalogs in microfiche format diffuse most of the difficulties associated with transliteration in the vernacular languages, spelling, forms of entry, and uncertainties with the entirety of the collection. Researchers can access the entire holdings for a specific language at the Russian National Library through the microfiche set; conveniently exporting selected titles via PDF scans. The following scans reflect some of the Kalmyk-language holdings available in microfiche format. 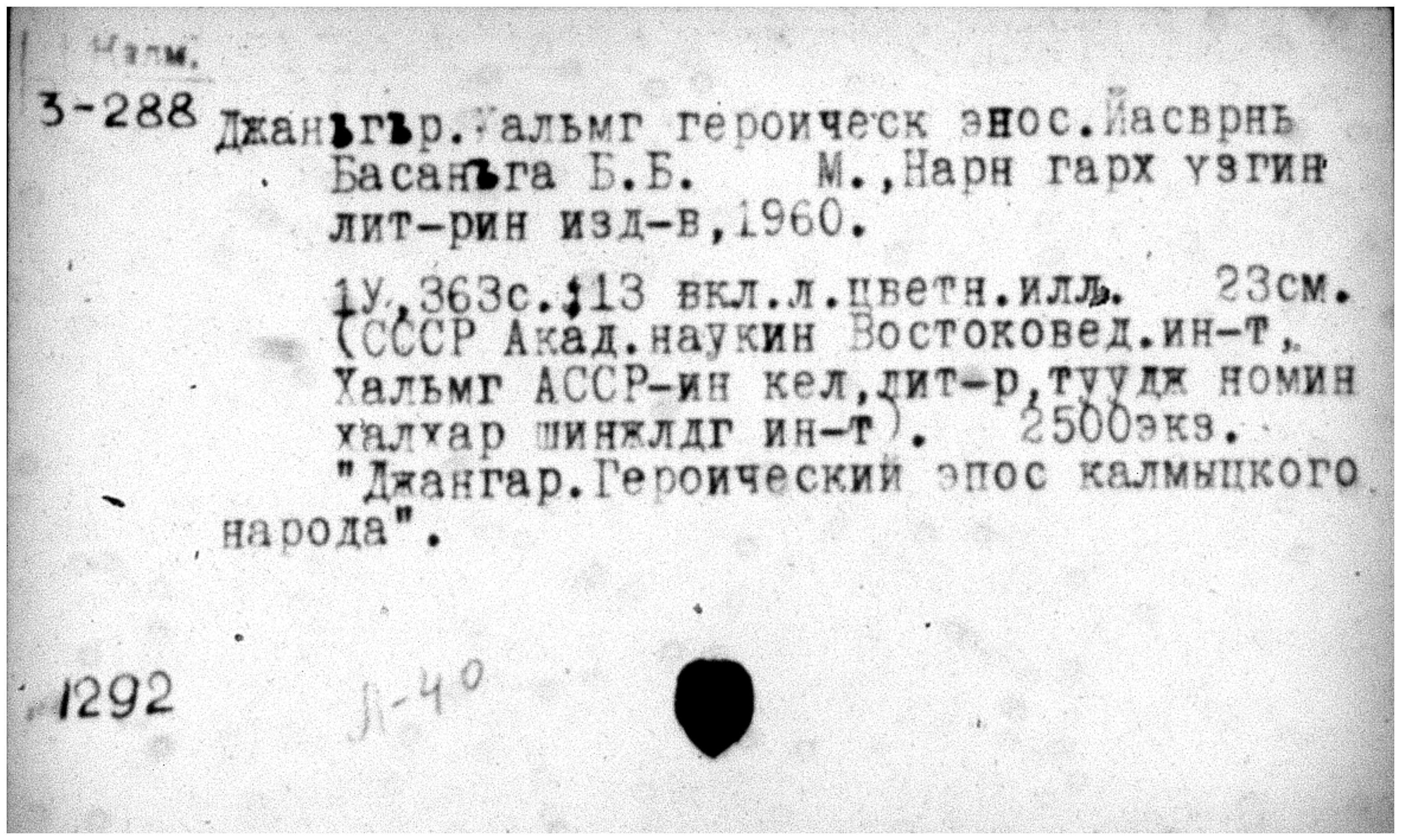 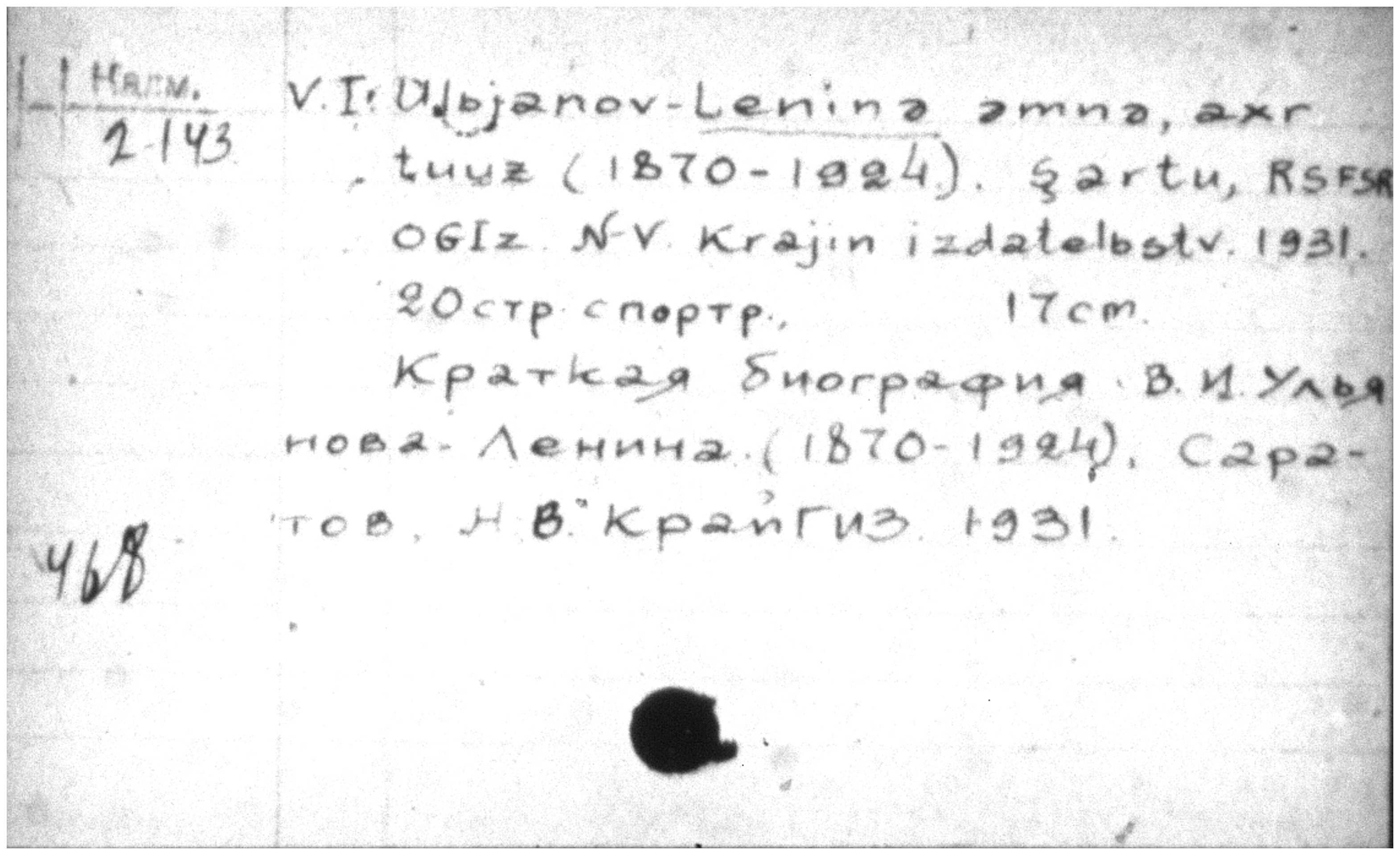 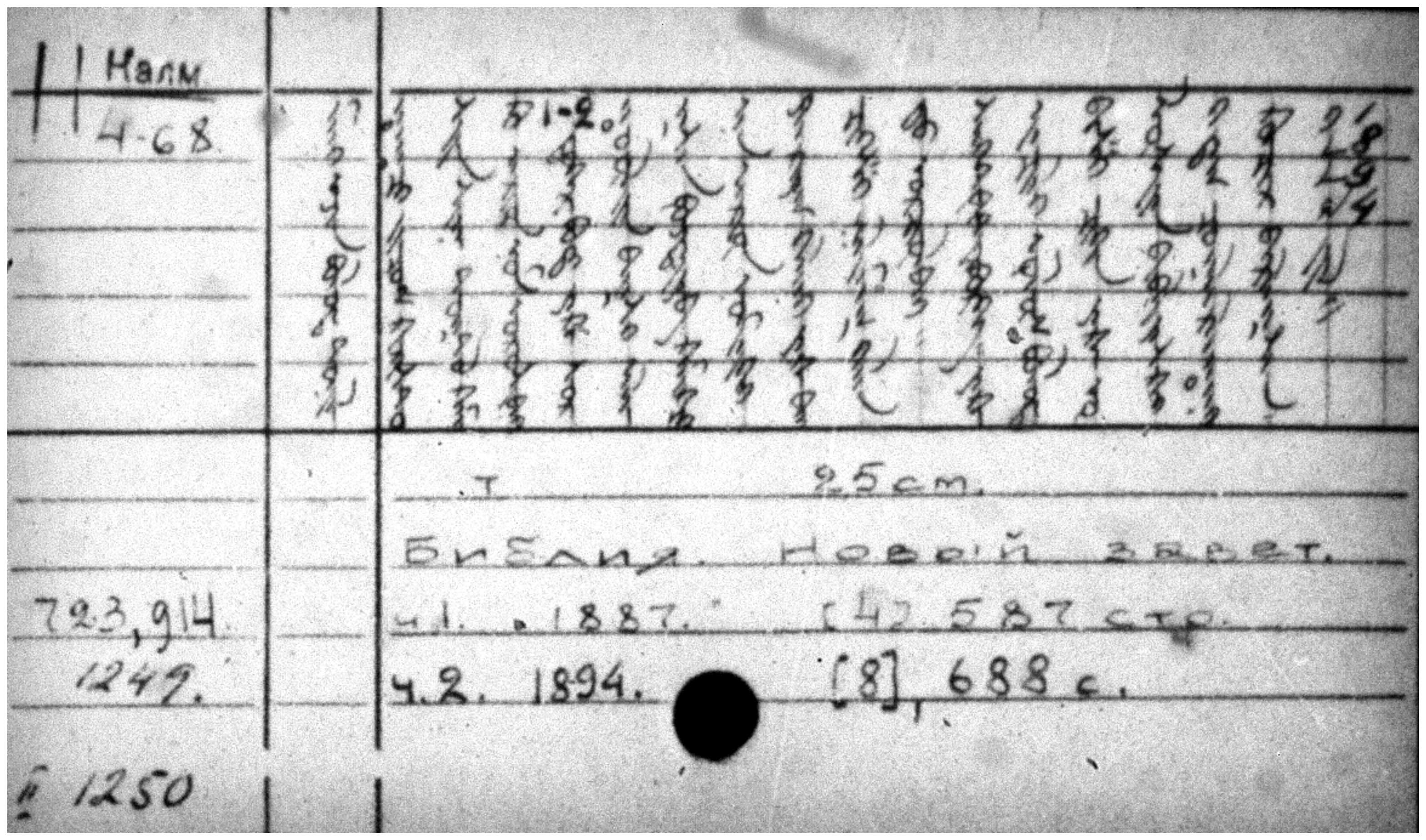 In 1971, 87 books and pamphlets (431,000 copies), nine magazines (23,000 copies annually) and 15 newspapers (71,791,000 copies annually) were published in Kalmykiia. The following is a list of Republic newspapers, including the date in which they began publication and the language of publication: Khal’mg unn (began in 1920) in Kalmyk; Sovetskaia Kalmykiia (began in 1920) in Russian; and Komsomolets Kalmykii (began in 1929) in Russian. Another periodical is Teegin gerl (1957) which is a literature and arts anthology published in Russian and Kalmyk. Users can consult Gazety SSSR 1917-1960: Bibliograficheskii spravochnik 5 for a list of newspapers published in Kalmykiia between 1917 and 1960.

The electronic library of the National Library of the Republic of Kalmykiia contains 1,395 items in its historical and ethnographic collection of documents from the 18th to the 20th century. Unfortunately, at this time, U of I patrons do not have access to the full-text documents of the digitized holdings. However, U of I patrons can browse the holdings and their bibliographic information according to the following themes.

The Academy of Sciences of Kalmykiia

The Kalmyk branch of the Russian Academy of Sciences is one of the major research institutions of the republic. On the institute’s website, users can find:

Kalmyk is a Mongolic language and also referred to as European Oirat, Kalmack, Kalmuck, Kalmuk, Kalmytskii Jazyk, Khalli, Oirat, Qalmaq, Volga Oirat, Western Mongolian and Kalmyk-Oirat. Until the seventeenth century, the Kalmyk written language was based on the Old Mongolic script and until 1924, on the Clear Script (Bichig, related to the Mongolic script). Between 1924 and 1930, the Latin script was officially adopted, and since 1938, the Kalmyk written language has been based on the Cyrillic script. In addition to the letters of the Russian alphabet, the Kalmyk alphabet includes the letters Ə ә, Һ һ, Җ җ, Ң ң, Ө ө, and Ү ү.

Users who are interested in using vernacular languages in their research, can download a Cyrillic extended keyboard that can be used for Kalmyk and many of the other languages of the Russian Federation.