The history of publishing in Estonian dates back to 1525, when the first book containing Estonian text was printed in Wittenberg, Germany. This book was probably a translation of Martin Luther, as the Reformation had spurred a growing interest in vernacular language materials [I]. A few years later, in 1631, the first Estonian printing shop opened in Tartu. It printed predominantly religious books in Latin, German, and Estonian [IV]. Throughout the 17th century primarily religious works were published in Estonian, including an Estonian language translation of the New Testament in 1680s [I]. In the 18th and 19th century secular materials in Estonian, including literary and scientific works, became more common. By the end of the 19th century, Estonian printers were issuing more secular than religious works. These items included fiction, scientific works, ephemera, and translations into Estonian from other languages [IV]. The late 19th century saw tremendous growth in the output and variety of Estonian publishing. While an average of 38 books per year were published between 1851 and 1859, this number had risen to 369 books per year by 1900 [II]. The beginning of the 20th century was marked by the expansion of the Estonian intelligentsia and further growth of the Estonian publishing industry. For example, the Estonian Literary Society, which published the academic journal Eesti Kirjandus (Estonian Literature), was founded in Tartu in 1907. During this period, the annual output of Estonian works continued to increase. Between 1901 and 1917, 8,673 unique items were printed in Estonian –an average of just over 540 items per year. These materials included 2,144 works of fiction, 1,847 religious books, and numerous nonfiction works and translations [III]. This growth continued throughout the 20th century and into the present day: According the Estonian National Bibliography database, 6,978 unique items were published in Estonia in 2013 [V].

ESTER is a union catalog representing the holdings of 15 major Estonian libraries belonging to the ELNET Consortium and their partner libraries. These include the National Library of Estonia, Tallinn University, and University of Tartu. Currently, the catalog reflects the holding locations for almost 9 million items. Although the ESTER Catalog has been in existence since 1999, it used to be split into two separate catalogs: ESTER Tallinn and ESTER Tartu. The joint catalog was launched in July 2014 and is still in the beta phase as data is migrated from the old catalogs. Researchers should keep that in mind while searching the catalog. The catalog offers robust advanced search options, including the capacity to search for holdings in a particular library. Additionally, each record includes holding location, a permalink, and option to print the record, and links to any digitized versions of the item that may be available. Searches in the catalog can be improved by consulting the Estonian Subject Thesaurus. See below for an example of a record in ESTER. 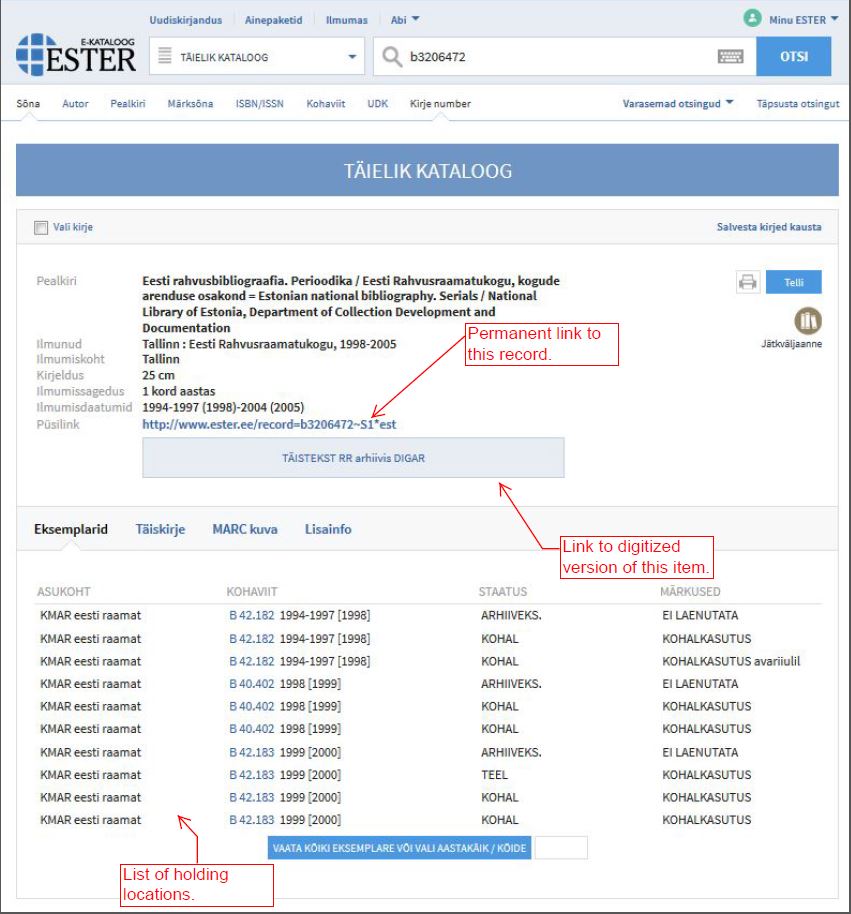 This scanned card catalog represents the Estonian holdings of the National Library of Russia until roughly 1998. The catalog is made up of 140 microfiche reflecting approximately 82,600 items arranged alphabetically by author. Each microfiche reproduces approximately 590 catalog cards. Some of the cards are typed, while others are handwritten and this variance can affect the quality of the reproduction. You can see a sample of several entries from the catalog below. Please be advised the quality of some of the scans is poor. 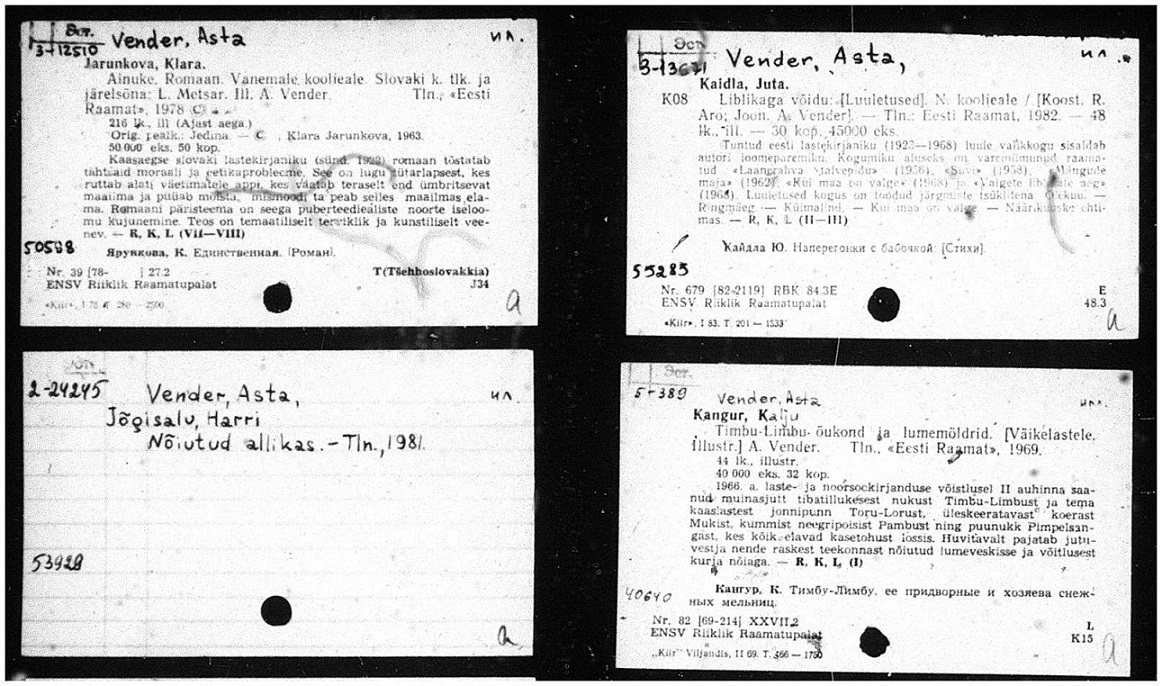 The Estonian National Bibliography Database is maintained by the National Library of Estonia, in cooperation with the Academic Library of the Tallinn University and the Archival Library of the Estonian Literary Museum. The database indexes materials published in Estonia, as well as materials written by Estonian authors or about Estonia and published abroad. As of July 2014, the database contains 307,054 reflecting both contemporary and retrospective national bibliography. New publications are added to the database as they arrive and retrospective titles are added in stages. New entries are added weekly. The database currently covers books (1525-present), newspapers (1675-present), journals (1700-present), sheet music (1918-present), maps (1802-present), sound recordings (1908-present), and video recordings (1988-present). Both analog and digital formats are covered.

The database interface is intuitive and available in both Estonian and English. There are multiple options for searching the database, which include searching for materials in a particular format or utilizing the extensive indexes available. For more information about the database, see this page: http://erb.nlib.ee/?p=abiinfo. Each record in the National Bibliography Database is linked to the corresponding record in the Ester Online Catalog, allowing researchers to identify holding locations for relevant items. Of particular interest to librarians is the inclusion of a MARC record for each item in the database to assist with the cataloging of Estonian materials. Additionally, each record includes a permalink and options to print and email the record. Researchers making extensive use of the database can save records for the duration of their search session by clicking on the “Add to Folder” icon. At the end of a session, you can export all saved records by clicking on the “My Folder” icon in the top right corner of the page. See below for an example of an entry in the database. Searches in this database can be improved by consulting the Estonian Subject Thesaurus. 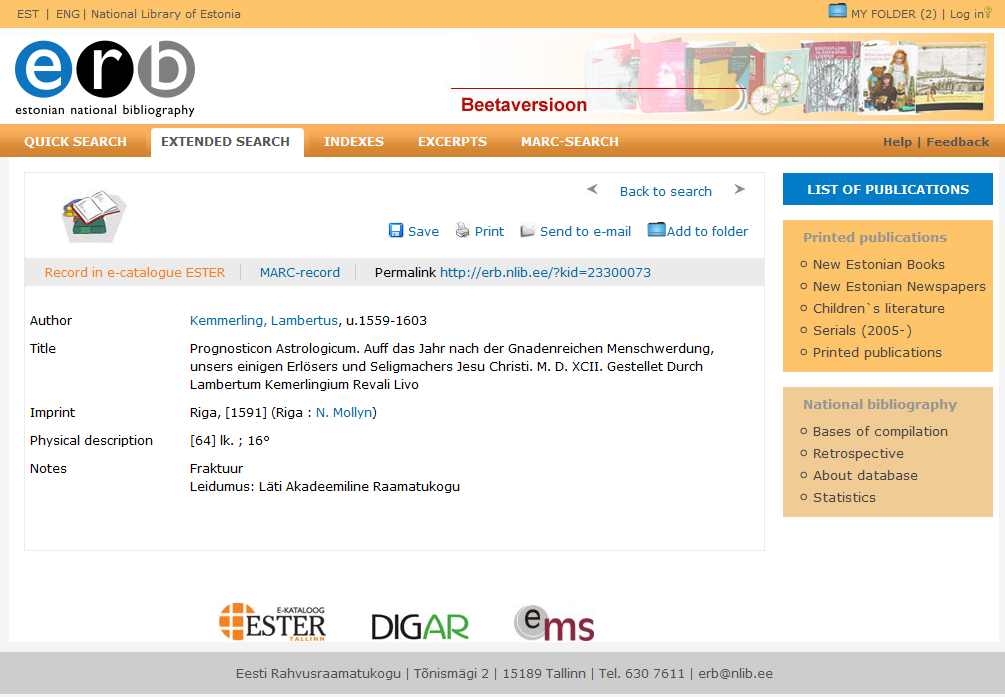 The most recent additions to the Estonian National Bibliography are accessible through the National Library of Estonia database described above. From the early 1990s through the mid-2000s, the National Library issued bibliographic information through several regularly published subseries, divided according to the format covered. The majority of these publications were published only electronically for a brief period, before being merged with the central bibliography database. The table below lists the available sub-series of Estonian national bibliography, alongside information about their coverage, availability, and arrangement. Some issues of the Estonian National Bibliography publications have been digitized and are available through the DIGAR Digital Archive.

The monthly sub-series devoted to books is arranged by subject and includes an author index. Each issue also includes an index of series titles. All entries include full bibliographic information including any series information and Universal Decimal Classification (UDC) number. (Issue consulted: 2001.)

Entries are arranged alphabetically by title, with Estonian titles listed first. Entries published outside of Estonia are marked with an asterisk (*). The bibliography contains and Index of Places and and Index of Series. (Issue consulted: 2004.)

Entries are sorted according to the government agency which published the item. Within each section, items are arranged alphabetically by title. Duplicate entries (published by more than one agency) are marked with an asterisk (*). (Issue consulted: 2004.)

This publication is divided into two sections: printed music and sound recordings. The sections are arranged alphabetically by name and several indexes are provided for each. (Issue consulted: 2004.)

This publication is an annual index to the monthly bibliography of new books published in Estonia, Eesti rahvusbibliograafia. Raamatud. Additionally, it contains a list of foreign publications about Estonia or written by authors of Estonian origin, statistical information about Estonian publishing, the ISBNs of Estonian publishers, and a bibliographic list of maps and other cartographic materials published in or about Estonia during the year. Entries are arranged according to their Universal Decimal Classification (UDC) number. Additional name, title, subject, and place indices are provided. The table of contents and preface are printed in Estonian and English.

This multi-volume set of retrospective national bibliography is published jointly by the Archive Library of the Museum of Literature and the Library of the Estonian Academy of Sciences. The compilers have attempted to be as comprehensive as possible including books, brochures, sheet music, maps, periodicals, annuals, pamphlets and calendars. This publication is a union catalog and holding institutions are listed in each entry. The institutions consulted for holdings were the Archive Library of the Museum of Literature, the Estonian National Library, Library of the Estonian Academy of Sciences, Tartu University Library, the Russian National Library and the Russian State Library. The volume begins with a brief but thorough history of Estonian publishing for the period. The editor provides information on all classes of literature, from trends in popular fiction to religious literature. A great deal of statistical data can be culled from this essay, which is provided in Estonian, German, English and Russian.

The bibliographic description in this work is very thorough. The contents of anthologies are provided and contemporary reviews are listed alongside the entries. Lists of composers can be found in the entries for music books. Pseudonyms are included where applicable. Entries for readers includes alphabetical list of authors with brief biographies of the authors provided. Biographies for foreign authors include nationality, field of work, and Estonian language publications about them.

This was the first attempt at a true national bibliography in Estonia. The bibliography was actually published as a supplement to a literary journal. It included all Estonian books exceeding four pages in length. Initially, periodicals were not included. Beginning with the volumes covering 1924-1928, periodicals and newspapers were indexed. The volumes covering later years did include citations to periodical publications. These lists were based on the monthly registration lists of the Estonian National Library.

This volume is another in the series of retrospective bibliographies being published by the National Library of Estonia. It describes more than 1,000 books printed during the German occupation of Estonia. Like the other volumes in this series it includes the holdings for the National Library, the Estonian Academy, and several other institutions.

The volume begins with a series of statistical tables. This volume provides a convenient listing of Estonian monographs arranged by subject. There is an alphabetical name/title index to facilitate access. Headings in the table of contents are given in Estonian and Russian. The volume includes a brief essay on pp.443-447 in Russian on “Books of Soviet Estonian” which is not listed in the table of contents. Authors and titles are also listed in Russian translation, but the entries are organized alphabetically in Estonian.

This series is modeled on the Soviet bibliography Knizhnaia Letopis’, modified to fit the publishing trends in Estonia. That is, it was issued monthly rather than weekly as there were not such large number of items to record. Additionally, it included music, periodicals, maps and graphic publications in its main series. Each issue included a list of the entries in that issue which were Estonian language publications. 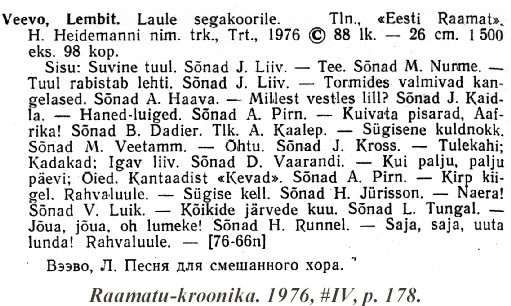