The Chuvash Autonomous Region was founded in 1920, and in 1925 it received the status of Autonomous Soviet Socialist Republic. In 1992, it became the Chuvash Republic within the Russian Federation. Its capital is Cheboksary. Chuvash is a Turkic language.

The following is a preliminary guide to bibliographic tools for researchers of Chuvashiia. Though not a comprehensive overview, this guide outlines four primary ways researchers can access bibliographic information about Chuvash publications:

This guide also highlights resources related to Chuvash history, culture, and language. Researchers may also want to consult the following online database for additional coverage: Elektronnyi katalog knig na iazykakh narodov RF i stran SNG on the homepage of the Russian National Library. Lastly, this guide highlights the electronic library associated with the National Library of Chuvashiia through which users can access select, digitized, full-text documents.

The Public Library of Cheboksary was founded in 1892, and it received its current status of National Library in 1994. The library holds literature in more than 50 languages from around the world. Its collection includes more than 2 million items in total, and it has the largest collection of books in Chuvash (approximately 40,000 books). Source: Entsiklopediia Chuvashskoi zhurnalistiki i pechati (2014), pp. 288-289.

Each catalog includes varying search options including: basic search, standard search, advanced search and professional search. Users can search minimally by key word, author and title. The image below shows the interface for the advanced search. 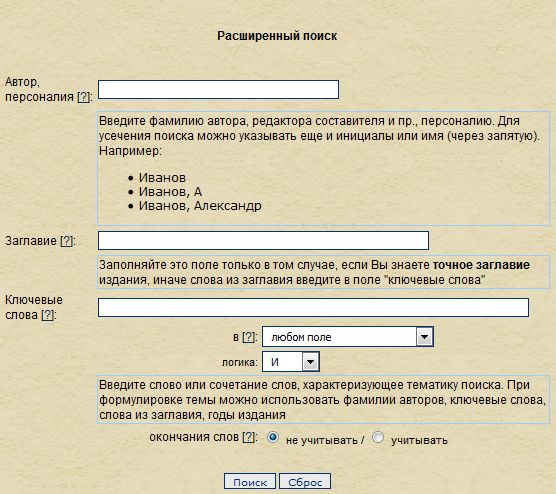 Document results give basic bibliographic information including the search term highlighted in red, the title, author, year of publication, ISBN/ISSN, BBK and rubrics. A sample result is shown in the image below.

Please note that due to maintenance issues, this website may time out. This can be corrected by refreshing the page.

(Image Catalog Database is currently unavailable. When it is active, you should be able to find it through the library catalog’s page)

This is a scanned card catalog database that reflects the library’s holdings (but does not include listings from the following databases: Books since 1993 and Books from 1993). Users can search by keyword, within a particular theme or category. In the image below the themes and categories are listed on the left hand side while the search interface is on the right hand side. Note that this is an integrated search which supports variation in key words. Users can also browse by theme, category, or by author (listed alphabetically).

Results show the actual scanned catalog card with all bibliographic information included on it (see image below). Users have the option of viewing the back of the catalog card as well. The results will have the keyword that was searched for underlined in red. Users can search in both Chuvash and Russian, but the site must be navigated in Russian. Please note that due to maintenance issues, this website may time out. This can be corrected by refreshing the page. 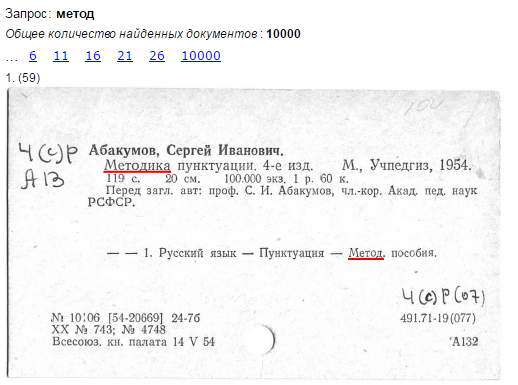 The Russian National Library’s Department of Literature in National Languages [also known as the Department of National Literatures] of the Russian Federation, Commonwealth of Independent States, and the Baltic countries has reproduced holdings catalogs in microfiche format. The national languages imprints catalogs in microfiche format diffuse most of the difficulties associated with transliteration in the vernacular languages, spelling, forms of entry, and uncertainties with the entirety of the collection. Researchers can access the entire holdings for a specific language at the Russian National Library through the microfiche set; conveniently exporting selected titles via PDF scans. The following scans reflect some of the Chuvash language holdings available in microfiche format. 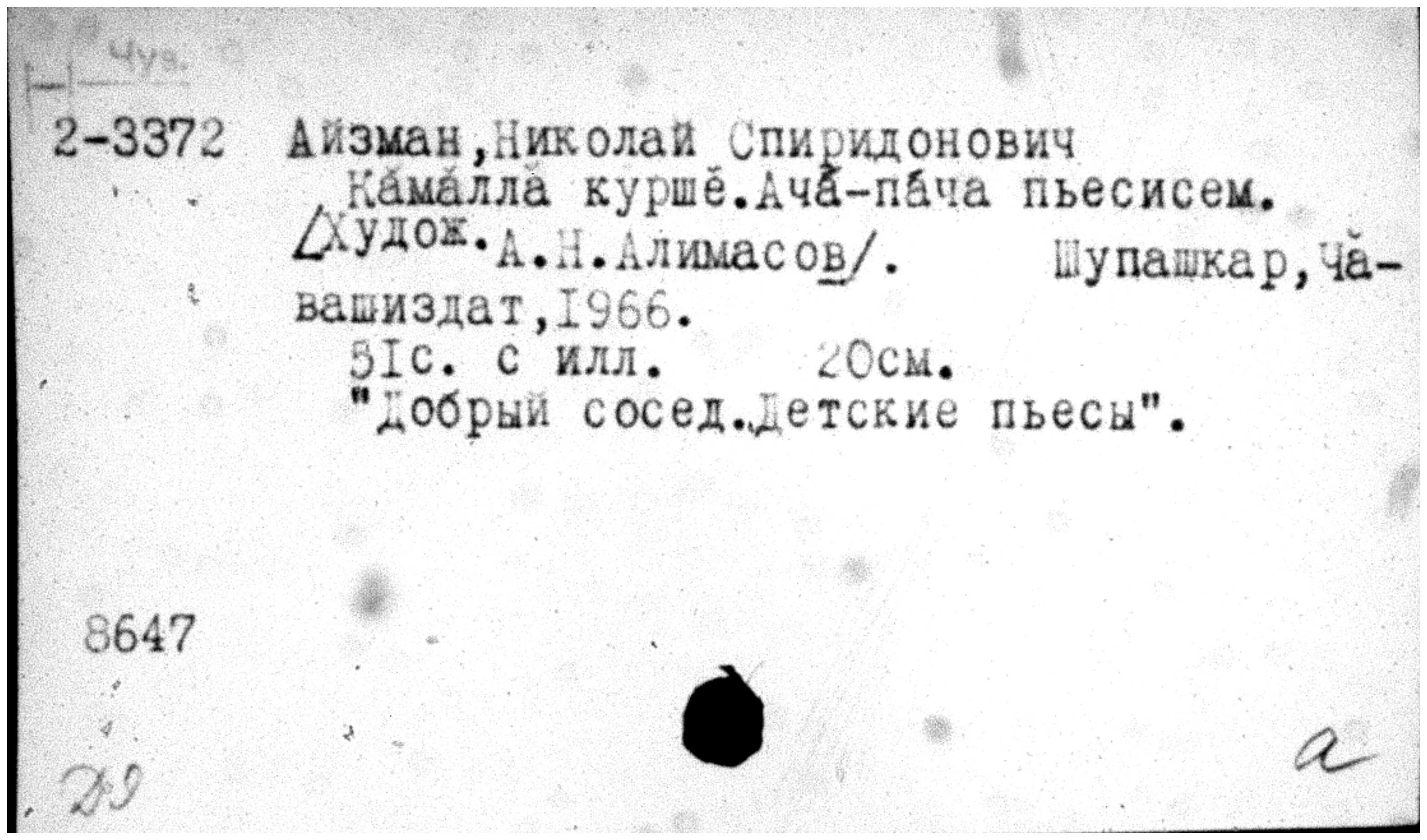 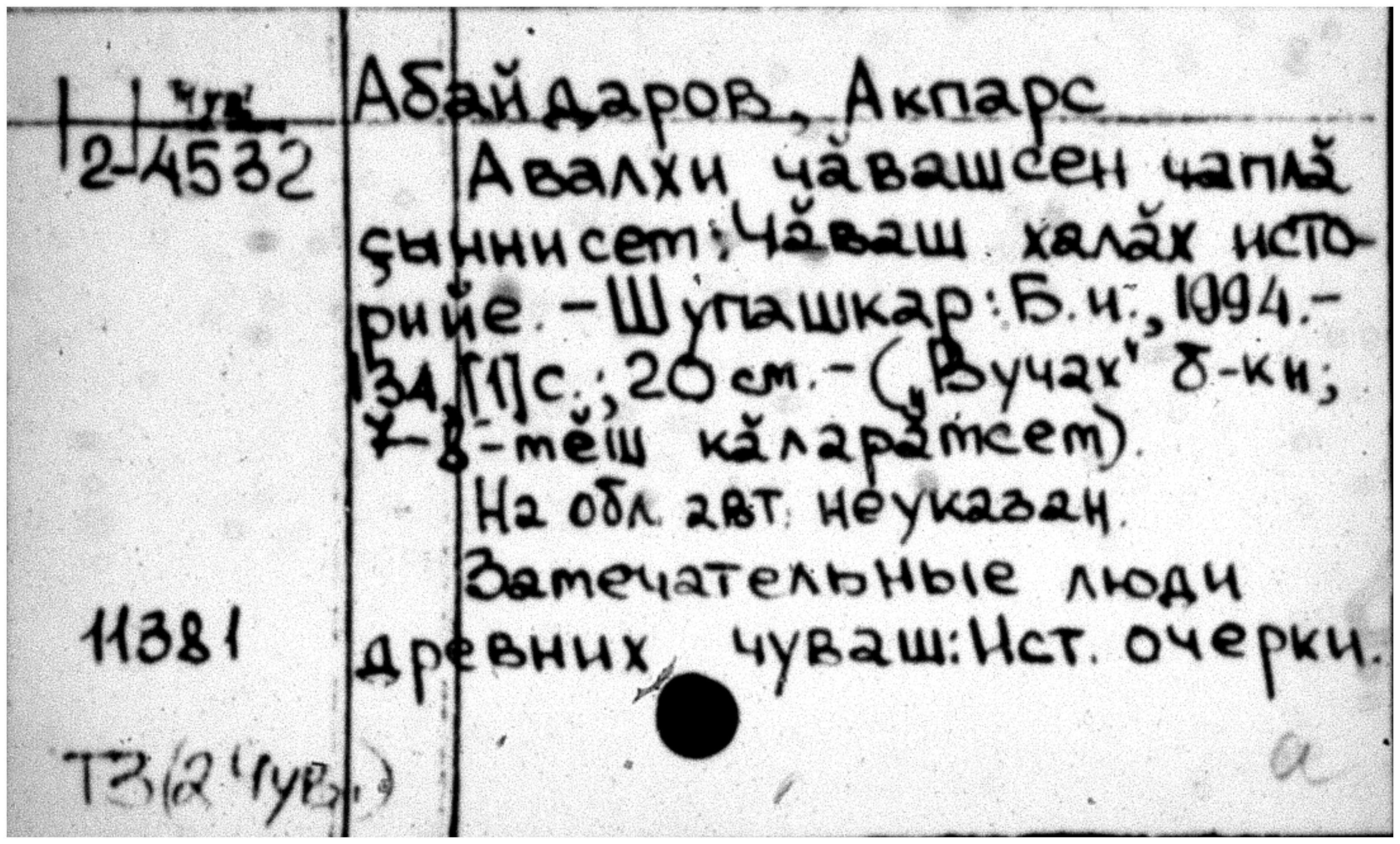 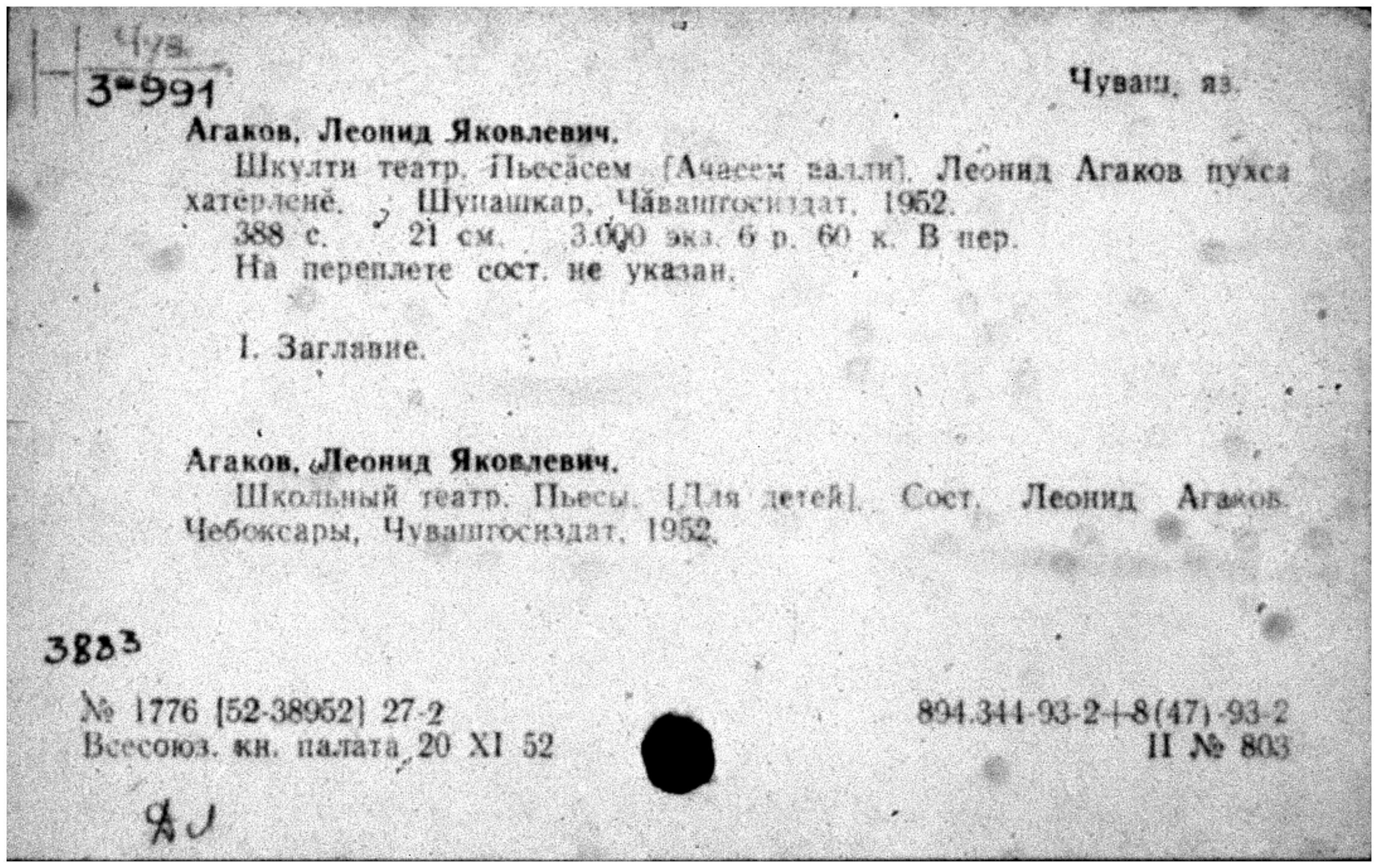 Chuvashiia has a rich collection of Chuvash-language folkloric materials such as poetry, songs, and folk tales, primarily from the 18th century. A major theme is the period of the Tatar-Mongol rule, the Kazan khanate, and the unification of Chuvashiia and Russia. In the nineteenth century, the body of literature, history, ethnography and folklore further expanded. While until the 1990s there was only one (state) publishing house for books in Chuvashiia, since 1999, there have been more than 60 state and private publishing houses. Major publishers are “Izdatel’sko-poligraficheskii kompleks Chuvashiia” and “Chuvashskoe knizhnoe izdatel’stvo”.

Since the establishment of the Chuvash Autonomous Region in the early Soviet period, the center of publishing in Chuvashiia has been the capital Cheboksary, although regional publishing houses were also created. Chuvash publishing experienced a strong growth, and between 1918 and 1959, more than 7,000 books were published in the republic, including more than 5,000 in Chuvash. Between 1922 and 1958, the number of periodicals and newspapers increased from 2 to 12, and from 3 to 47, respectively. The Book Chamber of Chuvashiia, founded in 1931, creates bibliographic and statistical records of materials – such as books, newspapers, periodicals, dissertations, and reviews – published in the republic, compiles bibliographies of works published in Chuvash and other languages, and collects and preserves rare historical materials from Chuvashiia.

In the 1950s, the Book Chamber also began publishing annually a letopis’ pechati covering the publications – books and articles in journals and newspapers – in the republic in a particular year. Between 1950-1956, separate knizhnye letopisi and letopisi zhurnal’nykh statei were published annually, as well. In 1954-1956, a Letopis’ razetnykh statei appeared every quarter. Since 1957, a quarterly edition of the letopis’ pechati has been published with books and pamphlets, printed artwork, periodicals, journal and newspaper articles, and reviews. Since 1964, the letopisi have included a separate section with materials about the Chuvash Republic and publications by Chuvash authors published in other republics. The letopisi also include statistics on printing press in the Chuvash Republic. The Chuvash Book Chamber also created retrospective knizhnye letopisi for the years 1918-1928 (1960), 1929-1938 (1964), 1939-1940 (1949), 1941-1945 (1949), and 1946-1949 (1950), as well as a letopis’ muzykal’noi literatury for 1917-1952 (1960). On the Book Chamber’s website, users can access electronic copies of the knizhnaia letopis’ for the years 2006-2013. Through WorldCat, users can find issues of the letopis’ pechati in physical (OCLC accession number 21244876) and electronic form (OCLC accession number 742440919).

In 1979 there were 207 books and pamphlets (2.1 million copies) published by the Chuvash Publishing House. The following is a list of newspapers and magazines and the year in which they started being published: Kommunizm yalave (1918), Sovetskaia Chuvashia (1917), Molodoi kommunist (1925), Pioner sassi (1931). There were also seven magazines published in 1979 including Druzhba (1941). Users can consult Gazety SSSR 1917-1960: Bibliograficheskii spravochnik 5 for a comprehensive list of newspapers published in Chuvashiia during these years.

For users interested in using archival materials, the website “Arkhivy Chuvashii”, provides information about three of the major state archives of Chuvashiia:

The electronic library is a database of digitized books, serials, articles from newspapers and magazines, unpublished documents, internet resources, and so on. The advanced search for the electronic library includes keyword, thematic categories, author’s name, publication type, ISSN/ISBN and a date range for the year of publication. This interface is shown in the image below. 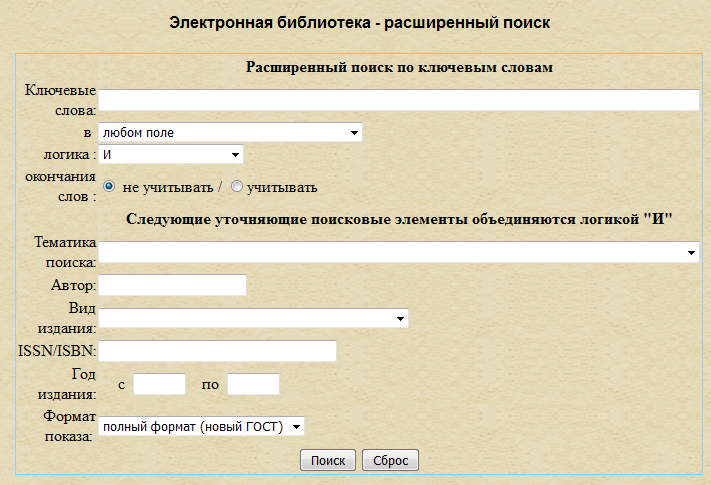 The results of either keyword searches or from browsing these thematic collections at the minimum include information about the author, title, year of publication and a link to the full text. These results may also include the UDK, BBK, rubrics, keywords and information about the number of available copies for an item. Users can also click on the author’s name within the results to see all other available documents by that author. The image below shows a sample result. 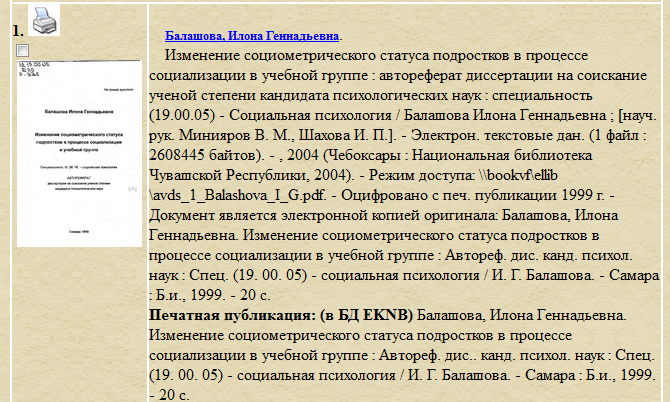 Note however, that while some full-text links link to PDF files, not all texts are available via the electronic library. Some will link to a page that says the document is available at the physical library (as opposed to online). Please note that due to maintenance issues, this website may time out. This can be corrected by refreshing the page.

On the portal Kul’turnoe nasledie Chuvashii (Chuvash cultural heritage), created by the Chuvash National Library, users can find information and resources outside the direct scope of the library. The materials are organized three major themes:

On its main page, the portal also provides links to other resources related to Chuvash history and culture.

The Chuvash language is a Turkic language and is sometimes also referred to as Bulgar. The Chuvash written language used a Runic script and an Arab script, until the Cyrillic alphabet was introduced in 1873. The Latin alphabet is used occasionally, but not in a standardized manner. The Chuvash alphabet has a number of characters that do not exist in the Russian alphabet: Ӑӑ, Ӗӗ, Ҫҫ, and Ӳӳ. Users interested in using vernacular languages can download a Cyrillic extended keyboard that can be used for Chuvash and many of the other national languages of the Russian Federation.