For more information about bibliography in Albania, the introduction to Albania: A bibliographic Research Survey with Location Codes (German title: Albanien: ein bibliographischer Forschungsbericht: mit Titelübersetzungen und Standortnachweisen,) pp.41-46 [U of I Library Call Number: International & Area Studies Albanian Reference (Slavic) 016.94965 H479a], provides a short, but helpful survey. Below are annotated the national bibliographic sources for Albania that are held by the University of Illinois Library. 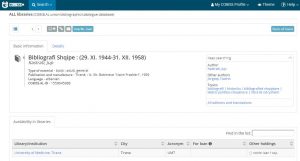 The National Library of Albania provides access to online catalogs, catalogs of digitized materials, a digital e-library, a digital reading corner, and a unique collection of e-Bibliographies. These bibliographies include Bibliografia e librit shqip, Autorë të huaj për Shqipërinë dhe Shqiptarët, and Bibliografia e përkthimeve në Shqipëri 2003-2018 (Index Translationum). Below is an example of a record for Bibliografi Shqipe: (29. XI. 1944-31. XII. 1958) from the electronic catalog at the National Library. 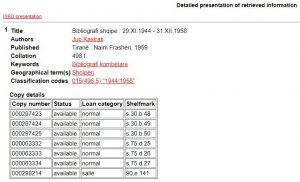 Tirane: Biblioteka Kombetare, Sektori i Bibliografise, 1960- .
U of I Library Call Number:

This section of the Albanian national bibliography which covers books has been published since 1960 and is still being produced today. It is issued four times per year and is based on what the National Library receives via legal deposit. The entries are arranged by subject classification with indexes in each issue for author, translator, personal name, title, and publisher. The list of subjects appears at the end of each issue. This serial has changed title a few times over the years with its earliest title being Bibliografia Kombetare e Republikes Popullore te Shqiperise. Libri shqip. See the entry below from the 1994:3-4 issue under the heading of “Albanian Literature.”

Tirane: Biblioteka Kombetare, Sektori i Bibliografise, 1961- .
U of I Library Call Number:

This section of the Albanian national bibliography which covers articles from Albanian periodicals has been published since 1961 and is still being produced today. It has been issued on a monthly basis since 1966. The entries are arranged by subject classification with indexes in each issue for names, names as subjects, places, and titles of periodicals analyzed in each issue. Cumulative annual indexes for the same categories are published very year. The list of subjects appears at the end of each issue. The serial has changed title over the years. It was also called Bibliografia kombëtare e Republikës Popullore së Shqipërisë. Artikujt e periodikut shqip. See the image below from the 1994:5 issue for two citations that appeared under the heading of “The Military.”

The following description of this important bibliography is quoted from page 41 of Albania: A bibliographic Research Survey with Location Codes: “Legrand, who apart from being distinguished as a Greek scholar, was the very first person who provided a chronological bibliography; in addition to supplements supplied by Guys, this included all original publications written in Albanian or on Albania until about the time the country achieved its independence.” (Albania became independent from the Ottoman Empire in 1912). Although this reviewer claims this bibliography contains all such publication, in truth it is selective in nature. This volume contains over 700 entries in various languages arranged chronologically by date of publication. Below the bibliographic citations are lists of libraries that hold the title. There are indexes for author, editor, library, engraver, and subject. Guys supplement that covers 1900-1910 was published in Tirana in 1938, but U of I lacks this volume. See the entry below for a religious work from 1872.

Originally published serially in Buletin i Universitetit Shteteror te Tiranes from 1962-1963, this volume and its subsequent editions contain citations for both published and unpublished works in Albanian from 1332-1850. The compiler intends his work to be comprehensive and since he also includes unpublished materials, it is more comprehensive than the Legrand/Guys work annotated above except that its coverage extends only to 1850, not 1900. The entries which are displayed in chronological order are extensively annotated. In the second edition items not included in the first edition are marked with an asterisk in the initial listing on pp.13-24, but are not marked in the body of the bibliography. The second edition contains 459 entries while the first has only 293. Both editions have indexes for author/translator, archives/libraries, printer/publisher, author of cited reference work, place, and subject. Illustrations appear only in the second edition. See the entry below for a grammar from around 1750.

Containing citations for approximately 2400 Albanian books from 1944-1958, this work also shows the contents of anthologies and collected works. The citations are arranged into 8 subject chapters such as history, Marxism-Leninism, Albanian literature, literary translations into Albanian, etc. The volume opens with a brief overview in Albanian of the history of Albanian bibliography. See the entry below for a collection of poetry by the Albanian author Ismail Kadare and its contents. 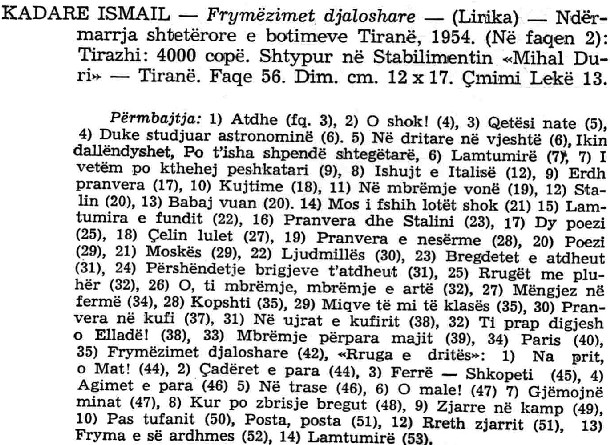