Compiled by Saitov and Modzalevskii at the request of Velikii kniaz’ Nikolai Mikhailovich, this three-volume work lists alphabetically by surname people buried in Moscow. Although the main focus is people of noble birth, those from other walks of life also appear here. An important part of this set is the bibliography of sources used in the compilation of the nekropol’ which is printed in volume 1 at the beginning. There is also a list of the monasteries included. Usually the entries provide birth and death dates and a full name for the deceased. Sometimes there is more information, sometimes less. See the entry below for Liubov’ Aleksandrovna Zmeova.

Just like the set discussed above this work was compiled by Saitov at the request of Velikii kniaz’ Nikolai Mikhailovich and in four volumes it lists alphabetically by surname people buried in St. Petersburg from the 17th-early 20th centuries. Although the main focus is people of noble birth, those from other walks of life also appear here. An important part of this set is the bibliography of sources used in the compilation of the nekropol’ which is printed in volume 1 at the beginning. The members of the royal family who are buried in the Petropavlovskii sobor are covered before the alphabetical list of all others begins. A list of additional entries is printed at the end of the fourth volume. Usually the entries provide birth and death dates and a full name for the deceased. Sometimes there is more information, sometimes less. See the entry below for the famous Russian bibliographer, V.I. Mezhov.

This guide covers churches and provincial cemeteries in the following gubernii in Russia: Arkhangel’skaia, Vladimirskaia, Vologodskaia, Kostromskaia, Moskovskaia, Novgorodskaia, Olonetskaia, Pskovskaia, Sankt-Peterburgskaia, Tverskaia, Iaroslavskaia, and the Valaamskii and Konevskii monasteries in the Vyborgskaia guberniia. The entries are arranged in alphabetical order by surname with information from the tombstones and the the name of the cemetary in which the person is buried. The emphasis is on people of noble birth with only relatively famous religious figures and merchants included. Usually you can get full name and birth and death dates from this source, sometimes even information about family members. No other volumes were issued. See the entry below for the nun, Snanduliia, who is buried in Pskov.

This small volume contains entries for Russian graves found in several cities in the Caucasus. The introduction does not give much information about the work or how comprehensive it is, but it does mention some of the churches and cemeteries visited by the compiler. Entries are arranged alphabetically by surname and usually provide birth and death dates and the place of burial. See the entry below for the merchant, Vasilii Timofeev, who is buried in Kislovodsk. There are no maps of the cemeteries in this book.

This is a guide to cemeteries in St. Petersburg. It includes scholarly articles about the history of cemeteries, the architecture of cemetary churches, and about the cemeteries themselves. There are many photographs and maps of the layout of each one. A list of the more famous people buried in each cemetery is provided. These entries include birth and death dates and often a description of the tomb or headstone. Particularly useful for biographical research is the index of names at the back of the book. See the entry below from the Smolenskoe Pravoslavnoe Kladbishche on the famous Russian bibliographer, Boris Modzalevskii.

Vagan’kovo is the final resting place for Sergei Esenin and Vladimir Vysotskii among others. In the introduction to this resource the history of Moscow cemeteries and Vagan’kovo in particular is briefly discussed. This guide is divided by the professions of the people buried in Vagan’kovo. For example, there are chapters on Revolutionaries, Scholars, Composers, Actors, etc. Within each chapter famous figures are mentioned interspersed in the text and not in alphabetical order. Fortunately, there is a name index at the back of famous people buried here, but the numbers do not refer to page numbers of the text, but rather to sections of the cemetery in which they are buried. See the charts at the back of the book. See the excerpt below on the writer, Ivan Rukavishnikov.

Novodevichii is one of the most famous cemeteries in Russia. Buried in it are such luminaries as Gogol’, Chekhov, and Prokofiev.This guide leads you through the cemetery, section by section, row by row, with maps and charts for further clarification. It lists every person in the cemetery and locates the graves of famous people in addition. An index of names at the back of the book directs you to the correct section and row. Entries are brief, with years of birth and death, and sometimes a brief mention of the individual’s career or social significance. See the entry to the right for Sergei Prokofiev and his second wife, Mirra, located in Uchastok 3, Riad 47, n.11.

Intended for the general user, this book is a guide to 7 cemeteries in Moscow, the Armianskoe, Vagan’kovskoe, Vvedenskoe, Kalitnikovskoe, and Piatnitskoe cemeteries as well as those in the Novo-devichii and Donskoi monasteries. These 7 places make up the 7 sections of the book. Each cemetery is described in detail with a chart of graves and mentions of the more famous people buried in them. Each section ends with a list of those people including dates of birth and death and a brief statement of their professions. The book concludes with a bibliography and a table of contents. Unfortunately for the biographical researcher, there is no comprehensive index of the names included in all sections of the work. There are some photographs of notable sepulchral monuments. See the list below of people buried in section 7, subsection 33 of the Armianskoe kladbishche.

This cemetery guide includes the names of 865 people buried in the Novostroiashcheesia Cemetery in Voronezh from 1831-1935. The introductory materials provide a brief history of the cemetery. Entries are arranged alphabetically by surname and usually provide birth and death dates and an archival citation referring to the State Archive of the Voronezh Oblast’. Let the entries below serve as examples.

Compiled at the request of Velikii kniaz’ Nikolai Mikhailovich , this one volume work contains entries for Russians buried in cemeteries in and around Paris from the 18th century to the beginning of the 20th. The introduction contains a descriptive list of the cemeteries covered in the work. The contents are heavily slanted toward the upper and noble classes with many Polish figures also included. Entries provide birth and death dates and sometimes brief biographical information. An asterisk marks a citation for an item from which the compiler obtained data included in the entry. See the entry below for Prince Dmitrii Mikhailovich Golitsyn.

Intended to supplement the many pre-revolutionary encyclopedias and other reference books with biographical information, this nekropol’ provides little information on very famous individuals such as M.M. Fokine and I.A. Bunin for whom there already is voluminous information, but it provides little known and previously unknown information on prominent (but not necessarily famous) Russians who died abroad. This source covers figures from all disciplines, from pre-revolutionary political and military figures to former Duma members and church officials. Entries may include the following data: full name, birth and death dates, place of death and burial, some biographical details and sources used to obtain the information. The dopolnenie at the end of the source includes selected people who died in the Soviet Union since 1917. See the entry below on Nikolai Bogolepov. NRS stands for the newspaper Novoe russkoe slovo, 27 is the last two digits of the year 1927, the issue number is 5320, 21/8 = August 21. 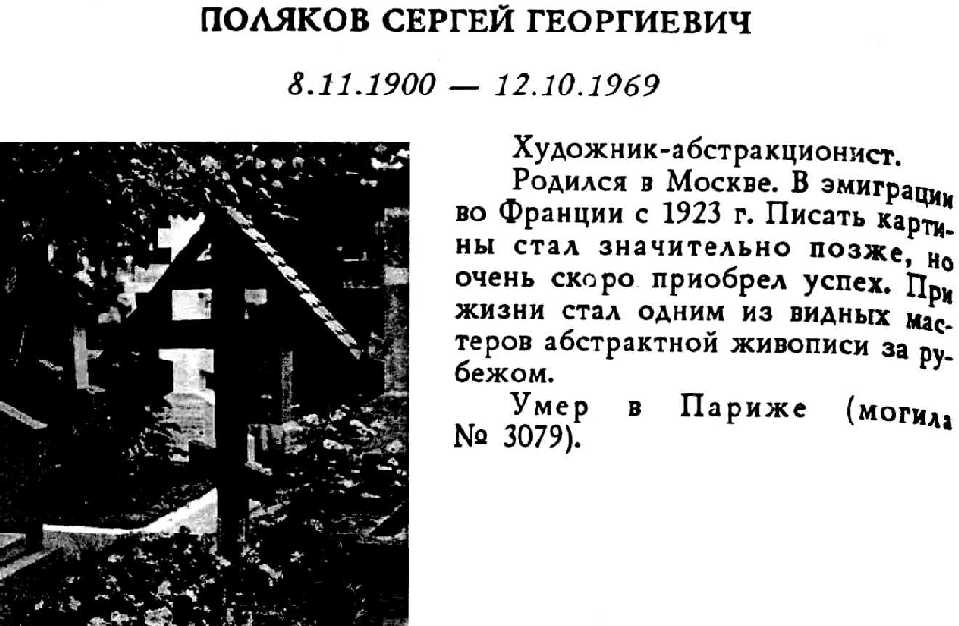 This small book (only 96 pages) contains biographical entries for famous Russian emigres who are buried in the Russian cemetery 30 km. outside of Paris called Sainte-Genevieve-des- Bois. Interred here are luminaries of twentieth century emigration such as Bunin, Lifar, Merezhkovskii, Tarkovskii, and Teffi. The book opens with a brief history of the cemetery in Russian, English and French. The entries contain birth and death dates, brief biographical sketches, a photograph of the headstone, and a grave number to help you locate it on a visit. See the entry above on the artist, Sergei Poliakov.

This is another guide to those buried in the 20th century Russian cemetery Sainte-Genevieve-des-Bois which is 30 km. outside of Paris. See the entry above for the earlier guide by Shulepova. This new guide is much more extensive, with more names and longer biographical entries. There is also a fold-out map at the back of the book which shows the location of many of the graves. Instead of including pictures of the graves as in Shulepova, Nosik’s guide includes photographs of the individuals. Entries include birth and death dates and biographical sketches. See the entry below on Lady Deterding.

A wonderful new source for information about Russian emigres, this set provides brief biographical data, locations of graves, and citations for obituaries and death announcements published in the Russian emigre press from 1917-1997. Although only the first three volumes have been published to date and thus the data is only for people whose surnames begin with A through K (Russian alphabetical order), it eventually will provide data for over 50,000 people. See the entry for Dmitrii Adeknov.

Verano is a cemetery in Rome founded at the beginning of the 19th century where many Russians and Jews from the Russian Empire have been buried over the years. This brief guide attempts to give biographical information for only a fraction of these Russian internments with most of those listed having died in the 20th century or at the end of the 19th. It begins with a brief history of the cemetery and provides charts of the layout of several parts where people from the Russian Empire are buried. Names are listed in two parts, those buried in the Christian section and those buried in the Jewish section. The biographical information includes names, dates of birth and death, and symbols for location within the cemetery. It was published as one of the series of Russian cemetery guides from the Russian Genealogical Society. To find the others in the series search WorldCat using Rossiiskii nekropol as the series title. See two entries below which are listed for the Jewish section of the cemetery.

This is the first issue in the Rossiiskii nekropol’ series. It lists the Russian burials in two cemeteries in Brussels, Ixelles and Uccle, where many figures of the first emigration to Belgium are interred. The compiler included Russian names and names found on memorials with Orthodox crosses. The first half of the books lists the names from both cemeteries and the the second half contains a further list of names culled from the Russian emigre journal Chasovoi which was published in Brussels from 1937-1941, 1947-1987. The journal listed other burials that occurred in Brussels. The entries provide full names, death dates, birth dates if known, and citation information for Chasovoi. See the entries below which appear in the first section.

This is another volume is the Rossiiskii nekropol’ series. It covers a military cemetery in Greece where many soldiers who perished on the Balkan Front during World War I are interred. 400 Russians are buried here. The guide has a brief introduction followed by a short bibliography of works about the Russian soldiers in the Balkans. The names of the dead are divided into two categories, burials in the Russian section from World War I and burials in the Jugoslav section from World War II. The entries provide only the soldier’s name and grave number. See the image below for a few entries from the section on World War I.

This small bibliography of literature on cemeteries and memorials has some titles that may be of interest to the biographical researcher. The book is divided into 5 sections, “Ancient burial vaults,” “The Kremlin wall,” “Moscow cemeteries,” “Memorial sculpture,” “The history of Moscow.” Unfortunately, the bibliography does not have annotations, but it gives citations to articles as well as books. See the citation below as an example.