This set follows the basic concept of the K.G. Saur biographical archives on microfiche. They have copied the entries from biographical reference books and cumulated all of the entries for one individual together. Thus, the entries are replicas of the original source with a citation to the original source at the head of each entry. This source is valuable because it eliminates checking numerous books for information and also provides access to sources that the U of I Library may not own. The Russian biographical archive contains entries for approximately 75,000 individuals from 162 sources published in Russia, the Soviet Union and the West between 1827 and 1995. Entries include Russians as well as Ukrainians and Belorussians from before the 1917 Revolution. A separate set for the Soviet period is in the works, but has not been published yet. Depending on the original sources, the entries may or may not have bibliographical references and may appear in languages other than Russian. Beware that sometimes the entries for different people with the same name may be conflated.

The K.G. Saur web site provides a list of the 162 sources covered in the archive in case you want to see the range of biographical resources in this area. This list is also available on microfiche at the beginning of the set. You can search the Russian biographical archive in the World biographical information system, which is available for U of I students and faculty through Online Research Resources (Databases). If you are not affiliated with the U of I you may want to check with your institution or your local library: it is possible that they provide access to the World biographical index. However its entries contain only brief biographical data, not the actual entries that are on the microfiche. The results of the search will tell you which sets contain entries for the individual and from which reference books they were taken. Beware: Although this archive is a valuable resource, do not be deceived into thinking that use of this source is will cover all bases. It is impossible to include all of the biographical resources that exist. If you rely on the Archive alone, you will miss some potentially useful material. Resources for Russian biography are extremely rich and the Biographical Archive doesn’t even scratch the surface, so be sure to use this set as a starting point only.

Follow the link for two entries for Anna Fedorovna Volkova, a Russian chemist, from two different sources as they appear on the microfiche. 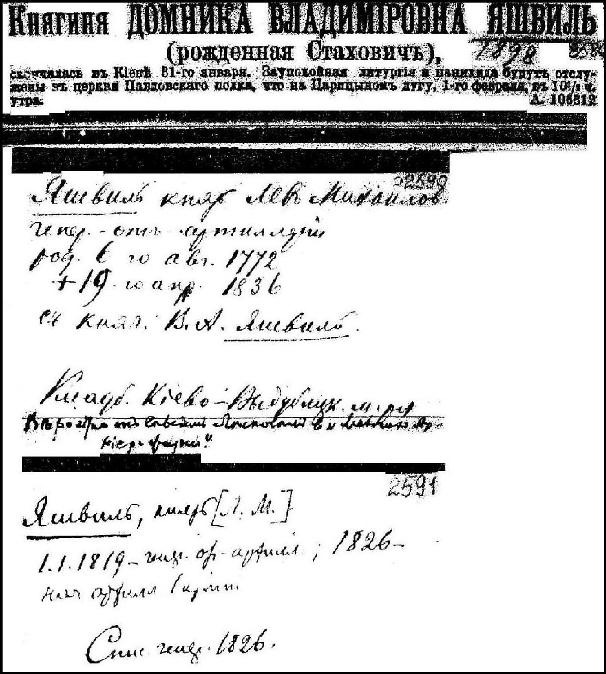 B.L. Modzalevski and his son created a card catalog of biographical information on influential Russians active in society and the arts during the 18th, 19th, and early 20th centuries. The original card catalog belongs to the Archives of the Pushkinskii Dom in St. Petersburg. This microfilm set consists of more than 165,000 cards on almost 100,000 people. The cards are handwritten with clippings from newspapers and other sources interspersed. All entries are organized alphabetically by family surname, but entries for individuals from these families may be mixed together. “The scholarly significance of these card catalogs is that they are the single source of essential genealogical and bibliographical information on a wide group of persons, mostly from the 19th century.” (Fondy i kollektsii Rukopisnogo otdela. Kratkii spravochnik. St.P.: Blits, 1996, p.19). Toward the end of the fiche set, further entries for A-Z begin. See the entry at the left for some of the material in the set for the Iashvil’ family. Note that each card or clipping has a number in the upper right corner for better tracking.

This site includes a biographical source entitled Bol’shoi russkii biograficheskii slovar’ that is comprised of articles taken from the following pre-revolutionary sources: Entsiklopedicheskii slovar’ and Novyi entsiklopedicheskii slovar’ of Brokgauz and Efron, Russkii biograficheskii slovar’by A.A. Polovtsov, and the Entsiklopedicheskii slovar’ by the Granat Brothers. Use the second link to link directly to the biographical dictionary online. Click on the Iskat’ button to enter the dictionary. There are two ways to access the articles in this dictionary. First, there is an alphabetical index. Click on the letter of the surname of the individual you are seeking. The second way is to click on the subject area in which that individual was active. The results are hyperlinked alphabetical lists of names included in this source. Unfortunately, there is no notation as to the original printed source of the articles. Figures who appear in an article and who appear in the dictionary in their own right are hyperlinked to those articles. 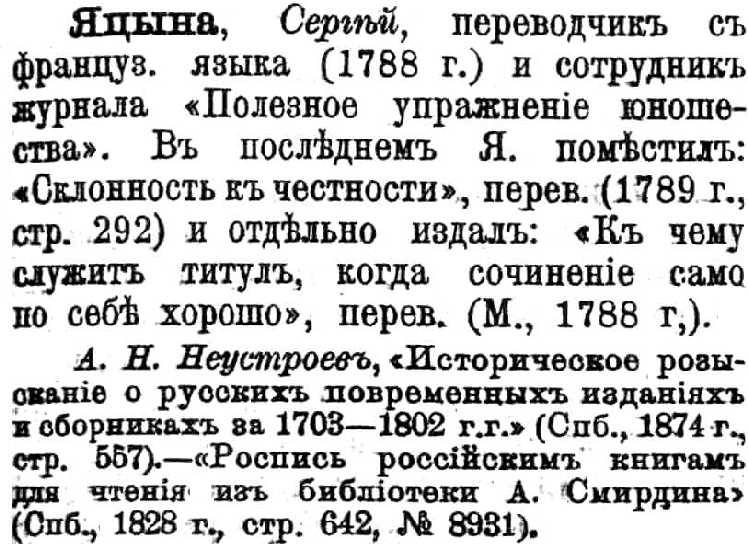 Published by the Russkoe istoricheskoe obshchestvo and edited by Polovtsov, this enormous set contains extensive entries with bibliographical references on the life and work of figures of the upper classes in pre-revolutionary Russian history who were involved in all disciplines and who died by 1892. Due to its sheer size and the richness of the bibliographic information in the articles, this source is extremely important for Russian biographical research. Entries are arranged alphabetically by surname. For a very detailed annotation see the entry in Kaufman’s guide to biographical literature in Russian, pp.14-24. New volumes of previously unpublished entries are being issued by the publisher Aspekt Press. See at the right the shortest entry we could find which happens to be on S. Iatsyna. Most entries are much longer.

This set began life as the working clippings files of Radio Free Europe-Radio Liberty. It contains one million clippings from more than 35 magazines and newspapers and abstracts on 50,000 people. There is a particular emphasis on Soviet public figures such as military personnel, government officials, scientists, members of the media and the cultural establishment. All entries are arranged alphabetically by surname, but the set is not easy to scan due to the nature of the entries. An entry may contain a copy of a newspaper article with the name of the figure underlined or marked in some way with pencil and that is the only way to determine the subject of the file. There is no standard notation at the top of each entry to make the subject obvious to the user. Follow the link for one of several entries on V.I. Drozdenko, a former Soviet ambassador to Romania. We added the arrow to point out their underlining. Note the handwritten citation at the bottom for Pravda, 12.11.74, 4, the source of the clipping.

Longman biographical directory of decision-makers in Russia and the successor states.

A recent English-language biographical dictionary of public figures in the former Soviet Union, this source provides not only basic data and career-related information, but also, according to the introduction, value judgments. Although figures from all former Soviet Republics are included, the emphasis is on the “new elite” from Russia, Ukraine and Belarus. The entries are arranged alphabetically by surname with an index at the back to give access to other entries in which a figure may be mentioned. The index does not give access to names of individuals mentioned in an article who do not warrant an entry of their own. Another valuable feature is a listing of entries by state/topic area. For example, under Azerbaijan figures from the realms of Culture, Government, Parliament, Diplomacy, Media, etc. are separated so if you want to find all the cultural figures in the dictionary, you may look at the culture listing for each former Republic. Or if you are interested in which figures from Moldova appear in the dictionary this listing gives you that information. Unfortunately, there are no bibliographical references at the end of articles and no bibliography of sources for the work as a whole. See below for the entry on Alimpy, Head of the Russian Orthodox Old Believers’ Church.

A Russian who’s who, this biographical dictionary contains short articles on public figures from all fields of endeavor, from government and politics to sports and culture. All entries are arranged alphabetically by surname. No bibliographic references are included with the entries. This source is helpful in finding out a few details on lesser known individuals, but there are better sources for finding more detailed information on extremely well-known people. For example, the entry on Boris Yeltsin only occupies a half column. See the entry to the right on L.B. Kogan, a member of the Russian Academy of Sciences.

If you are looking for brief biographical data in English on journalists, religious figures, artists, government officials, etc., as of 1982 and from all the Republics of the FSU, this source could be very helpful. The organization of the body of the text and the indexes make it easy to locate biographies. Entries are arranged alphabetically by surname, but indexes enable you to see a listing of all the biographies from a particular profession, such as all the scientists, included in the book. There is also an index by government office and by SSR. This book updates an earlier edition from the 1978 and an index lists the names of people who were retired, dismissed or replaced between 1978 and 1982. See the entry to the left on the actress, Ekaterina Grigorevna Kazimirova. 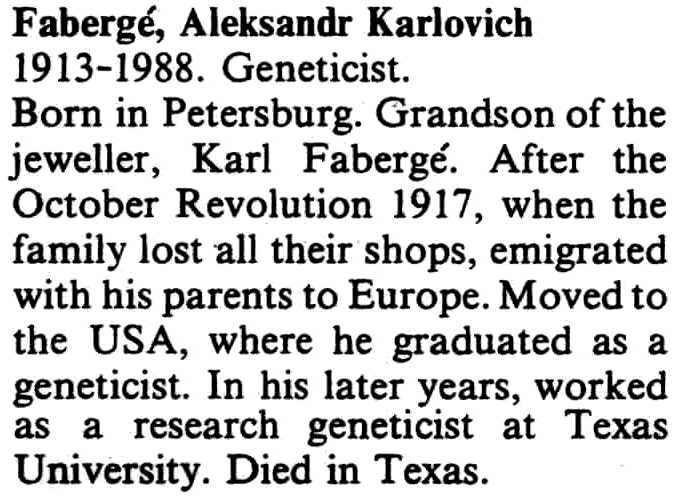 This English-language biographical dictionary contains entries for over 5000 notable Russians from all disciplines regardless of whether they lived in the Soviet Union or not. Many pre-revolutionary figures appear in this volume because they died in 1917 or later. Entries are brief with biographical and career data and historical significance. Some entries include bibliographical references. They are arranged alphabetically by surname. The index at the back group entries together by profession. See the to the left entry on Aleksandr Faberge, grandson of the famous jeweler. 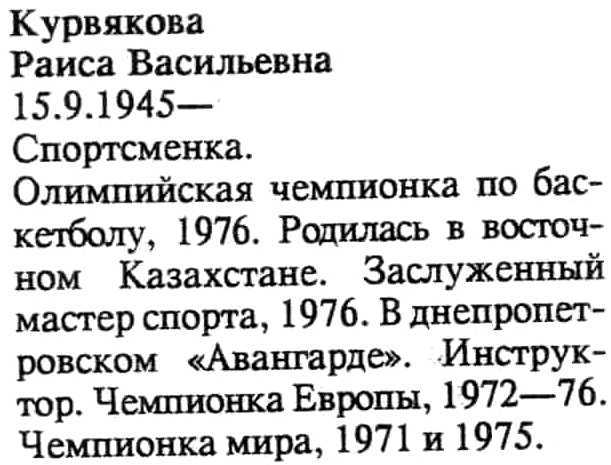 A later, updated Russian version of the source listed directly above, this biographical dictionary has entries for more than 6000 prominent Russians living in Russia or abroad. Entries are brief with biographical and career data and historical significance. Some entries include bibliographical references. They are arranged alphabetically by surname. See the entry to the left for Raisa Kurviakova, an Olympic basketball player. 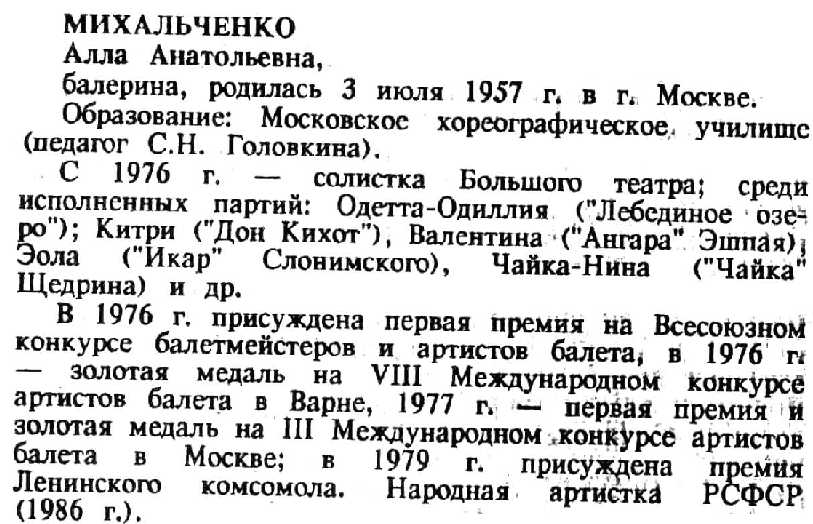 This source contains entries on Russians and others from the former Soviet Union involved in all aspects of government and society who were alive and active at the time of publication, 1993. Entries provide basic biographical data, educational and career information and for some a list of publications. Entries are arranged alphabetically by surname. There are no indexes of note in the volume. See the entry for the ballerina, Alla Anatol’evna Mikhal’chenko. 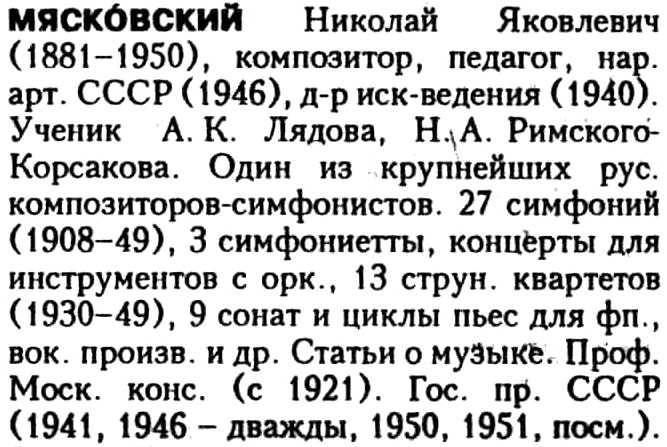 With over 7000 entries, this small biographical dictionary is a quick reference tool for brief information on figures from all historical periods, including the present, and from all over the world. It can be valuable because it includes many Russian emigres. It is intended for a general audience so there are no bibliographies. There is, however, a list of scholars who participated in the preparation of the biographies at the back of the book. See the entry for the composer, Nikolai Iakovlevich Miaskovskii.