The Russians have produced a number of biographical dictionaries for professors and scholars from various institutions or disciplines. Only some of them have been annotated below. For a current source on Russian historians try Istoriki Rossii in the biographical section of the History guide.

This section includes mostly biographical dictionaries or sets that are not covered in the Russian biographical archive . Those few that are both in the RBA and included here are of particular significance and are noted as such. Resources for Russian biography are extremely rich and the Biographical Archive doesn’t even scratch the surface, so be sure to use it as a starting point only. 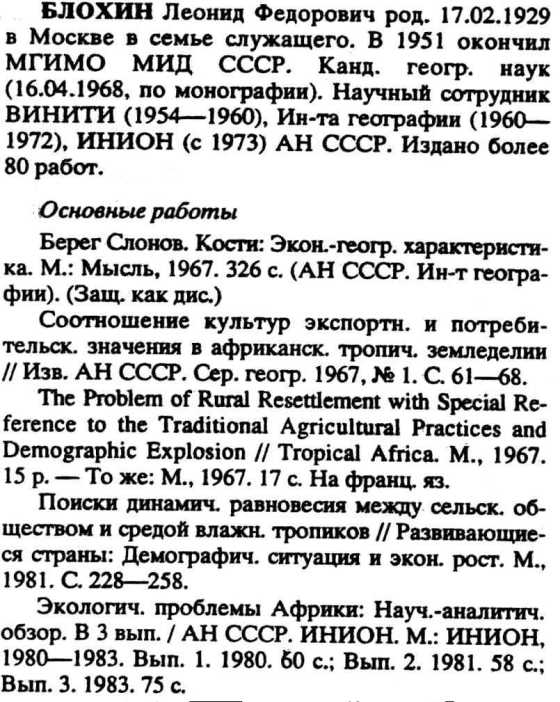 This dictionary includes biographical sketches and bibliographies for Soviet orientalists who have produced at least 10 scholarly publications. By orientalists the compilers mean anyone who studies the culture or social sciences of Asia, Australia, or Africa. Many people who were left out of the first edition have entries in this edition, including orientalists who were repressed during the 1930’s-1950’s. All entries contain biographical data and bibliographies of the most important works. The entries are arranged alphabetically by surname with a few additional entries appearing at the back in the Dopolneniia . A helpful index at the back arranges the entries by region and then by subject. See the entry to the right for Leonid Fedorovich Blokhin.

The focus of this biographical dictionary is Slavists in pre-revolutionary Russia. The term Slavist means anyone who studies any aspect of Slavic culture, from art to paleography. Entries, which are written by over 120 Russian Slavists, include biographical data, a discussion of the figure’s work and significance and bibliographical references for works by and about the figure, as well as an archival citation if the location of pertinent archives is known. Entries are arranged alphabetically by surname and there is a name index to give access to people mentioned who do not have entries of their own. See the entry to the right for Petr Osipovich Morozov.

With over 1500 entries, this dictionary of Slavists continues the work of the volume listed above on prerevolutionary Slavists by providing biographies of Soviet Slavists including immigrants from foreign countries who published in the former Soviet Union. What distinguishes this work from its predecessor besides the dates of coverage is that this one focuses on Slavists who study West and South Slavic cultures. The entries are written by researchers from the Institut slavianovedeniia i balkanistiki at the Russian Academy of Sciences and include biographical,educational and career information for each Slavist as well as bibliographical references for the most important works by and about the Slavist. Entries are arranged alphabetically by surname. See the entry on the left about the linguist, Mikhail Iakovlevich Nemirovskii. 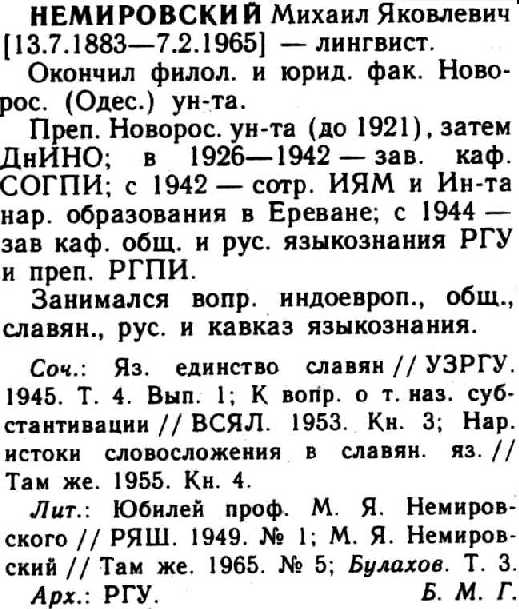 Directory of scholars in Slavic studies in Institutes of the Russian Academy of Sciences.

With entries for over 800 individuals, this directory gathers information about scholars who work for the Russian Academy of Sciences who are engaged in one of the disciplines of Slavic Studies. It includes archaeologists, linguists, historians, sociologists and others. Entries are arranged alphabetically by surname with birth dates, educational data, positions held, areas of interest, and contact information. An index by area of interest is appended at the back of the book. See the entry for Evelina Borisovna Mel’nikova. 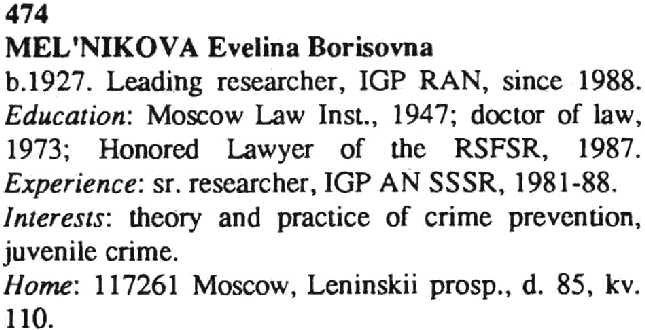 Although this title is included in the Russian biographical archive , the 2nd edition from 1989 is not, so we offer an annotation here of its usefulness. In order to be included in this volume an individual had to be a Turkish specialist from the territory of the Russian Empire active from the 18th century to 1917. Entries cover basic biographical data and provide bibliographic references for works by the figure, for works used to compile the entry and, if known, for obituaries of the figure. If a published bibliography of the figure’s works exist, that citation is provided under Roman numeral I. Entries are arranged alphabetically with a name index at the back to give access to people who do not have their own entries. There is also a subject index. See the entry below for Sultan Rakhmankulov. References following I. are works by Rakhmankulov and those following II. are works used to compile the information for this entry. 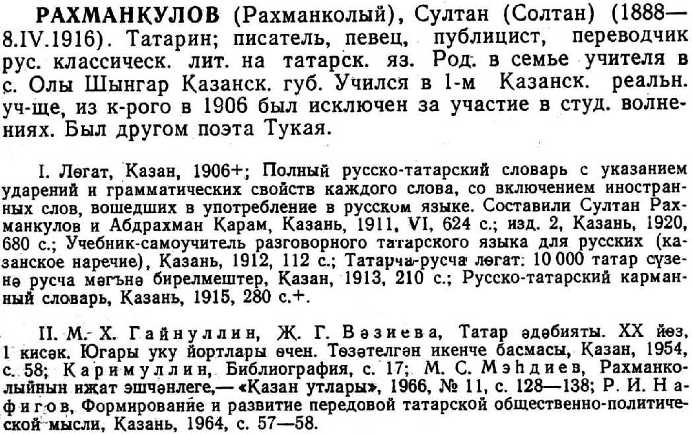 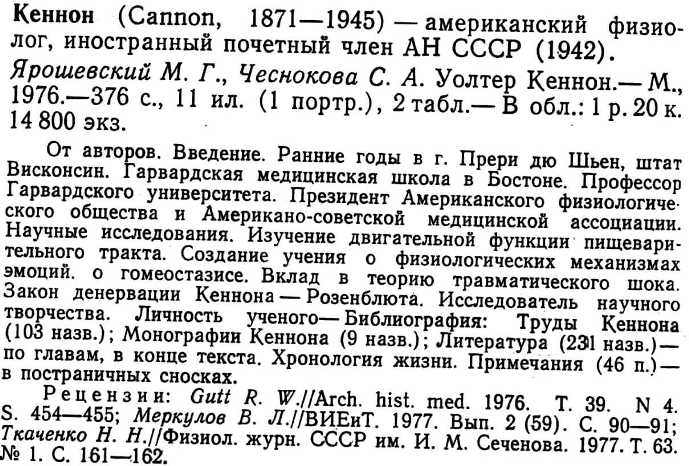 After every 100 new biographies published in the series Nauchno-bibliograficheskaia literatura, a book is compiled to commemorate the event. The series releases biographies of scholars in the fields of science and technology from all over the world. This source opens with detailed information about the publication history of the series before it lists and annotates the biographies published thus far. For those titles that were annotated in an earlier commemorative volume [200 nauchnykh biografii (1975), 300 biografii uchenykh (1982)], there is a brief biographical listing for the scientists involved. The annotations themselves contain quite a bit of biographical information. Citations for translations and reviews (some from non-Russian sources) of the biographies are also included. The entries are arranged alphabetically by the name or surname of the scientist covered in one of the published biographies. Since the series includes many photographs, this volume lists the contents of group photographs and individual portraits. There is also biographical data for the editors and authors of the NBL series and appendices which group the biographies by discipline and century. A name index tops it all off. For those interested in the history of science, this volume could be quite useful. See the entry above right on Walter Cannon, an American physiologist and honorary member of the Academy of Sciences of the USSR.

This source provides biographical entries for the scholars from all disciplines who are members of the Russian Academy of Sciences. Although the information for the entries was gathered almost a decade ago and thus the telephone and fax numbers may be inaccurate, this source is still valuable for the personal facts and most notable publications contained therein. All entries are arranged alphabetically by surname in two sections, “Chleny-deistvitelnye” and “Chleny-korrespondenty.” There are no accompanying indexes or bibliographical references for the entries. See the entry below on Nikolai Balashov, a member of IMLI. 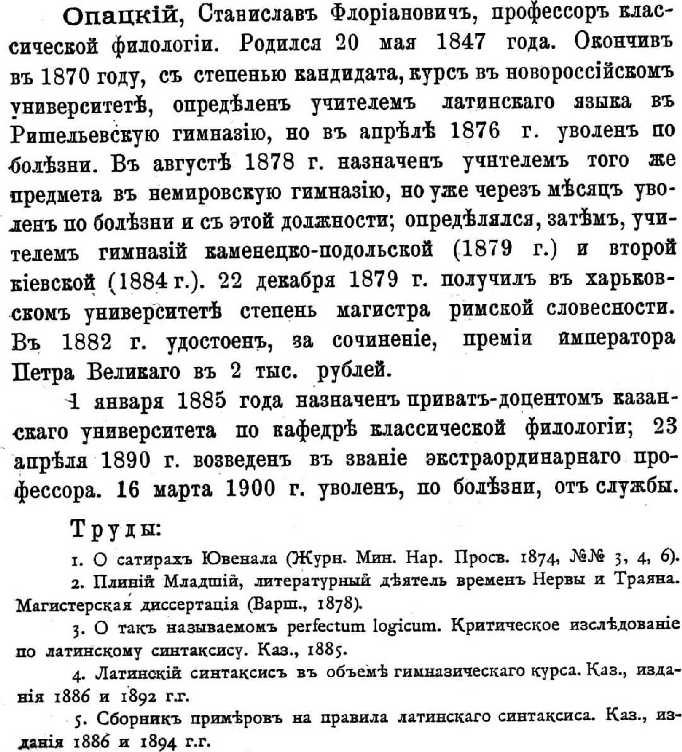 Although this set is covered by the Russian biographical archive, it is listed here because it is particularly valuable and deserves to be more well-known. It includes biographies of faculty members at the Imperial Kazan University from 1804-1904. Besides biographical data, entries have bibliographies of published works including citations for dissertations, and bibliographies of works in manuscript form. Entries are arranged into sections based on the university fakul’tet. The first volume contains the faculty members from the Orthodox Religion, Historico-Philological, and Physico-Mathematical fakul’tety. The second volume contains the faculty members from the Law, Medicine, and Art fakul’tety. At the end of the second volume there are a few appendices which list other people associated with the University including various deans and also a name index for both volumes. See the entry on the right for Stanislav Opatskii, a professor of classical philology.

The first half of this book is a history of the Historico-Philological fakul’tet at Kharkov University. The biographical entries of the faculty members appear in the second half separated into different sections for each department. Some of the entries are quite extensive with bibliographical references at the end and interspersed in the text. Portraits of faculty members appear at the back after the name index. See the entry below for Ivan Zolotarev from the Department of Russian Language and Literature which was one of the few short entries that we could find. 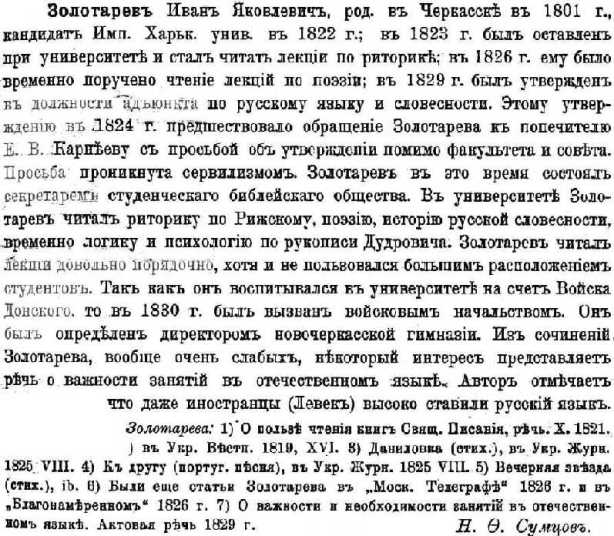 Although this source is not arranged in the typical fashion of biographical dictionaries, there is much to be found between its covers. It is a history of the first 50 years of the St. Petersburg University with descriptions of the departments and information about the professors on staff. The history is arranged into three periods, 1819-1835, 1835-1863, 1863-1869. In addition to the narrative part, there are several appendices that contain biographical information such as the lists of students organized by department. There is also a name index that covers both the narrative and the lists. Follow the link for information on Petr Davydovich Kalmykov, a professor in the Iuridicheskii fakul’tet, which is found on p.149.

Although this source is included in the Russian biographical archive, it is important enough to mention here since it was intended to be a continuation of the Grigor’ev volume annotated directly above. This biographical dictionary includes sizeable entries for those who taught at St. Petersburg University between the years of 1869-1894. In addition to brief biographical information and career highlights, these entries often have extensive bibliographical references for works by the professor. If the entries were written by the professors themselves, they are unsigned. If they were written by a another person, they are signed by that person. Follow the link to the entry for A.A. Badmaev, a medical doctor and Mongolian expert.

Although this source is included in the Russian biographical archive , it is important enough to mention here. This resource is arranged in the typical manner of biographical dictionaries, with entries alphabetical by surname. Chast’ 1 contains entries for A-L plus a short dopolnenie, chast’ 2 for M-Ia. Entries are for those who taught at Moscow University from 1755 to 1853 and contain personal data and career highlights. Bibliographical references are embedded in the text of the biographies. Many of the entries are extensive. The introduction to chast’ 1 contains the list of sources used to compile the dictionary as well as a chronological listing of the professors based on when they began teaching at Moscow University. This chronology also lists the names of the authors of the biographies for easier access to that information. See the brief entry below for Guillaume Raoult, a lector for French.

Scholars and academics who study the ethnic groups and nationalities problem in the former Soviet Union are the subject of this biographical dictionary. All information in the entries except the bibliographic data was gathered via questionnaires. Entries contains current address and phone number (as of 1995), institutional affiliation, areas of professional interest and a brief bibliography of publications. Entries are arranged alphabetically by surname with a subject index at the back of the book. This handbook was sponsored by the Carnegie Endowment for International Peace. See the entry on the linguist, Isa Khalidovich Abdullaev. 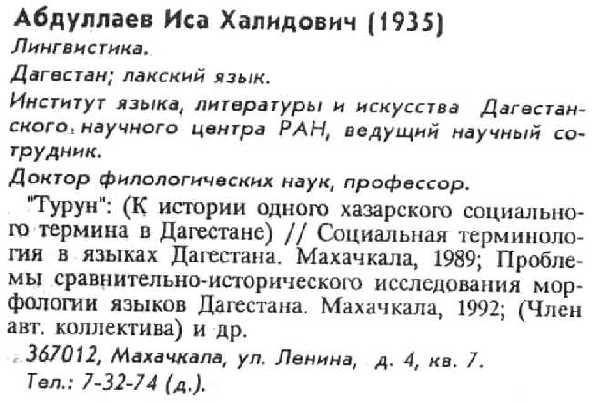 With over 1800 short biographies, this source is valuable for finding information on professors and scholars who taught at MGU in the 1996-1997 academic year. Entries contain basic biographical data, scholarly fields of interest, education, and life and career highlights. Entries are arranged alphabetically by surname with an index that groups them by fakul’tet. Unfortunately, the bibliographic references are scanty, but you can get an idea of how many publications each scholar has produced since that number is given in each entry. See the article on Leonid Voevodin.

The Russians have produced many biographical dictionaries with a regional or ethnic emphasis. The spravochnik listed below is just one such resource.

With over 420 biographical articles, this dictionary may help you find scarce information on living and deceased scholars in the Former Soviet Union who are ethnic Udmurts. The biographies cover scholars from all fields of endeavor. The entries include a biographical sketch with background information and career highlights, a photograph of the scholar, as well as a bibliography of works by and about the scholar. Entries are arranged by discipline and then alphabetically by surname within each discipline section. Follow the link for the entry on Irina Nikolaevna Testova.