Bibliography of bibliographies from all areas of study. It is a good launching point for research in different areas of knowledge. It registers bibliographies of Polish authors regardless of the language and place of publication. Also contains bibliographies of foreign authors, concerning Poland or including Polish material. Beside monographs and periodicals published separately, it lists bibliographies appearing as parts of periodicals or published as addendums. Apart from bibliographies it lists also encyclopedias, biographical dictionaries, lists of theater repertoires and actor roles, printed library catalogs, publishers’ catalogs, bookstore and antiquarian catalogs. The chronological scope: 1625-1950. The work is subdivided into three parts: 1. bibliographies of bibliographies, 2. general bibliographies, 3. specialized bibliographies. The specialized bibliographies section is subdivided into 25 parts devoted to different areas of research. Each one has the same structure: general compilations, history of the particular area of science, bibliographies of separate issues, periodicals and writers connected with the particular area of research. The bibliography contains two indexes. The first: “Skorowidz autorow i prac bezimiennych,” listing in alphabetical order authors’ names, pseudonyms, cryptonyms, names of editors, translators, publishers, as well as titles of anonymous works. The second index: “Skorowidz osob i przedmiotow” is an alphabetical listing of subject headings, including personal and geographic ones.

In comparison with the first two editions of the work the bibliography is considerably enriched by the contributions of Henryk Sawoniak, who added approximately 1000 new entries and supplemented numerous existing ones.

Please note that although each subsequent edition is based on the previous one and introduces new material, there were some items listed in the 1921 edition that were omitted in the subsequent printings.

The annotations are short, always containing the number of items comprising a bibliography. Two indexes are provided: the alphabetical one lists authors’ name, co-authors, and (in italics) titles of bibliographic periodicals, anonymous and collective works. The subject index alphabetizes subject entries, thus facilitating collection of materials for a given topic. The work is easy to use and quite exhaustive in its treatment of subject matter.

Besides bibliographic lists, the work also contains bibliographic reviews of the state of research in different areas of science, as well as selected lists of publications cited in scientific works (end-of-work bibliographies). There are also some other lists of bibliographic value such as: selected catalogs of library collections, all catalogs of incunabula and old prints, union catalogs, and exhibition catalogs if they contain information about publications and other library materials. The booksellers’ and publishers’ catalogs embracing long periods of time or listing literature on a given subject are also included.

The volume is based largely on the materials included in the annual Bibliografia Bibliografii I Nauki o Ksiazce, however some items, considered by the editors to be of minor importance, were omitted. On the other hand, several items not listed in the annual publication were included (eg. foreign polonica).

The bibliography is divided into seven parts:

The annotations are brief, always containing the number of items comprising a bibliography.

The bibliography has two indexes:

The work could be described as Polish national bio-bibliography. It includes biographical information on deceased persons, active both in Poland and abroad, who contributed in a significant way to Polish economic, social, political and cultural heritage. The entries have been prepared by outstanding researchers withing the fields of activity of persons described. The structure is alphabetical. Medieval personages and personages belonging to ruling dynasties are entered under their first names. Each entry contains a brief subject bibliography and iconographic information.

Appears as an annual. So far it has covered years 1956-2006. It registers material published abroad, written by Poles or connected thematically with Poland. Includes bibliographic descriptions of books, musical scores, maps, periodicals, and authors included in collective works. Although an attempt at complete coverage is made, the bibliography does is not comprehensive. The material is divided by subject, within each subject division is alphabetical by author, and by title in the case of anonymous and collective works. Each volume has a personal index and an index of names by countries and beginning from volume for 1993, also a title index.

Note: Earlier record for Polonica can be found in Estereicher’s “Bibliografia polska”-material published until the end of XIX century. “Urzedowy Wykaz Drukow,” 1928–, included polonica in a separate volume “Wykaz Drukow Polskich lub Polski Dotyczacych.” The attachment appeared until 1939. Polonica that appeared in the years 1901-1939 were included in “Bibliografia polska 1901-1939” that has been appearing since 1986. Bibliography of Polonica for September 1939-1955 appeared under the title “Polonica zagraniczne. Bibliografia za okres od wrzesnia 1939 do 1955 roku,” v. 1-3, Warszawa, 1975-1991.

The publication registers items from two fields: Polish bibliographies and materials from the area of book studies (bibliology Nauka o ksiazce). It is a very broad field comprising the study of all disciplines, both technical and theoretical connected with books and librarianship.

From 1968 there was a change in internal structure: contents split into 2 separate parts with own indexes:

Each volume is divided into seven sections:

First edition registered Polish literature preceding 1863 (The January Uprising). Also included were deceased Polish writers who wrote after the uprising. This is cause for some strange selections, for in vol. 3 we find some very minor writers, while there is no mention of such major figures like Kazimierz Tetmajer, who died only in 1940, but whose virtually entire opus was published before the bibliography’s publication. Examples of such inconsistencies abound.

In second edition, due to criticism, the criterion was changed to include authors who began publishing before 1914.

Supplement I — Dopelniacz I Intended as a first in a series of supplements.

Each entry includes a brief biographical sketch and a list of works. In the case of more prominent authors Korbut added information on the sequence in which the works were written.

Unlike Estreicher, Korbut noted also works existing only in manuscript. When list of published works is provided the collected works precede individual pieces. References to more important reviews are provided.

Entries on more prominent authors contain also a list of bibliographic works devoted to the writer.

It is important to note that Korbut used personal, extremely strict criteria when assigning the name of a monograph to a work about an author. So, for example in the entry on Krasicki we find the note “monografii brak” — none of the existing works satisfied Korbut’s exacting criteria.

Within each subdivision Korbut uses chronological sequencing, therefore search for individual authors should be conducted alphabetical indexes included in every volume. All the volumes contain also excellent chronological tables. In the index the numerals refer to the pages on which the author is mentioned, with the entries in bold being the main entry.

Indexes include anonymous works and works of unproven authorship.

Although personal entries comprise the bulk of the work, the bibliography has a number of subject entries covering literary periods, currents, literary associations and groups, as well as institutions connected with literature.

There are errata (sprostowania) and addenda (dopelnienia) included in each volume. Volume 4 contains these for itself as well as the three preceding ones.

Intended to entirely replace “Stary Korbut.” All the material of the old series is being preserved, in many cases it is being considerably expanded by extensively revising old entries and adding a large number of new ones. The new Korbut has grown sixfold relative to the old one. The new edition introduces alphabetical arrangement of personal entries within each volume. Personal entries are preceded by subject entries. In the new edition, several personal entries regarding literature after 1863 were omitted, if the author was not connected directly with creating literature or writing literary criticism.

Includes also some names of authors and translators of non-literary works important to the development of the Polish culture of the period. Included are authors of so-called gazety pisane. Also included are authors writing in Polish beyond the boundaries of pre-partition Poland, on ethnically Polish areas of Mazury, Pomorze, Gorny and Dolny Slask.

Includes translations as well as plagiarisms of foreign works. Includes letters and manuscripts, however partlydue to lack of central register of Polish Enlightenment manuscripts, and partly to other reasons, is fragmentary and not always verified.

In the case of lost or destroyed items the bibliography marks it by stating: zaginiony or zniszczony.

of names, of titles, of geographical names.

Of all the periods also covered in the original Korbut this is perhaps the one most extensively reworked and expanded. For example: in the old Korbut by the name Abgarowicz Kajetan we find only a mention that he was a novelist. In the new edition we find 13 novels listed, besides sketches and works published solely in journals. On the other hand, since the literature coverage has been expanded so dramatically, historians, philosophers and politicians were not included (unlike in the older version) unless they wrote belles lettres or critical works on the subject of Polish literature.

Inclusion of authors in this part of the original bibliography was established by the date of the literary debut. In the second edition several authors whose major activity fell on the years between the world wars were omitted and ‘passed on’ to the editors of Slownik wspolczesnych pisarzy polskich (eg. Tadeusz Boy-Zelenski, Leopold Staff and others). For the sake of clarity the time span of 1863–1918 was divided into only three main literary periods: Pozytywizm, Naturalizm, Mloda Polska. Within these, bibliographic entries of books and articles are listed in the orde of the first printing.

Works in foreign languages are not included. Translations are included, as are letters.

It contains indexes and a dictionary of pseudonyms and cryptonyms.
The bibliography is based on the following sources: Estreicher, Przewodnik bibliograficzny, Urzedowy wykaz drukow, unpublished bibliographies existing in manuscript, catalogs of major Polish libraries.

Just like in the case of Stary Korbut the new rewriting is a selective bibliography. Indexes to the work are not always exhaustive, thus it is worthwhile to search also the corresponding subject entries for information that may have not been mentioned when the name of the individual author was indexed.

This catalog is searchable by subject, title, title keyword, author, series or journal title. It is available through the National Library of Poland. 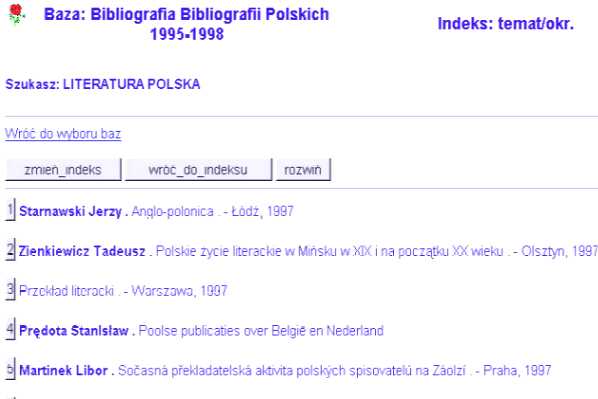 The sample search above shows the brief records returned on a search of the term “literatura”. Clicking on a specific title will provide the user with full bibliographic information.