Compiled by the eminent Czech Balkanologist Konstantin Jirecek (click on the link above and scroll down to read a bit about Jirecek), this small bibliography covers Bulgarian books from 1806-1870. Although this work has been superseded by some of the works annotated on the page for Bulgarian National Bibliography, it is still interesting for bibliographico-historical purposes. It lists 532 items plus a short compilation of additions alphabetically by author or by title if there is no author. There is an index for subject. See the image below for the first few items in the bibliography.

Issued from 1957-1991, this bimonthly bulletin consists of two parts: the first lists and annotates newly published items extracted from the Bulgarian National Bibliography and the second contains articles, bibliographies, or other materials to help public librarians provide services for readers. The items in the first half are arranged by subject classification. Each issue has an author index for the first part and selected issues have subject indexes to the second part. In 1992 Bulgarska kniga took over some of the functions of Novi knigi such as listing and annotating selected new items and providing articles about topics of interest to readers, but it also has reviews, anecdotes, some illustrations, and an unannotated list of new items.

The Bulgarian Academy of Sciences was founded in 1869 in Braila under the name Bulgarskoto Knizhovno Druzhestvo. In 1878 it was moved to Sofiia and renamed in 1911 to Bulgarska Akademiia na Naukite. For more information about the Academy see its website at http://www.bas.bg/.

For the time period covered this is the most comprehensive bibliography of Academy publications. The work is divided into two parts, the first for the contents of periodicals and the second for monographs. The first part is arranged by title in chronological order and the entries show the contents of each issue. The second section on monographs is also arranged by date of publication and for collections the full contents is provided. Part of the introductory materials is a list of the BAN periodical publications included in the bibliography. There are indexes for names/titles, subjects, and places. See the image below for the contents of the first volume of Sbornik na Bulgarskata Akademiia na Naukite. 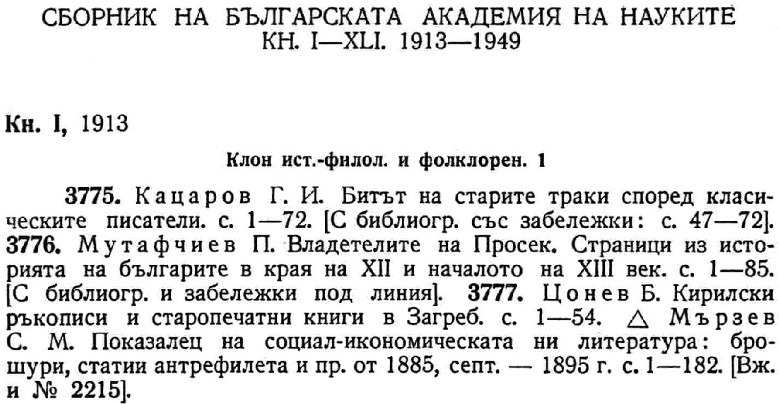 This volume is not as complete as the one listed above simply because the one above covers additional years. But it does provide complete coverage of the years cited with good indexing. Thus, if the bigger volume is not available to you, this one will suffice.

This source covers Bulgarian Academy of Sciences publications from 1954-1970. The book is divided into sections for each Otdelenie of the Academy such as the Otdelenie for linguistics, literature and art or the one for history and pedagogy, etc. This volume does not contain the works of the scientific branches of the Academy, only those of the social sciences and humanities. Within each of these sections there are further subdivisions for the publications of particular institutes or scholarly centers and then the contents of each of their periodical and monographic publications. There are a geographic index and an index for names. See the image below for the beginning of the contents of tom 3, 1954, of Izvestiia na Instituta za bulgarski ezik. 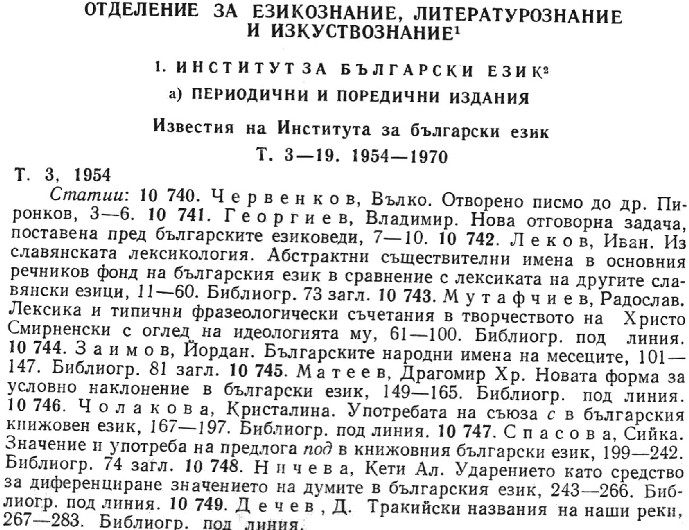 Published on the centenary of the founding of the Bulgarian Academy of Sciences in 1869, this bibliography presents monographic and periodical publications of several scholarly organizations in Bulgaria: Bulgarian Academy of Sciences 1869-1968, Bulgarskoto knizhovno druzhestvo v Braila 1869-1878, Bulgarskoto knizhovno druzhestvo v Sofiia up to 1911, Akademiiata na selskostopanskite nauki v Bulgariia 1961-1968. (N.B. BAN publications from 1947-1968 that were published by other publishing houses are not included). The bibliography is divided according to academy and then by institute or division within the academies. Serial publications are listed to show which volumes appeared in which years, but unfortunately, the contents of the periodicals are not analyzed and no indexes are provided for the bibliography as a whole. The bibliography opens with a section listing important acts or decrees related to the founding and subsequent organization of the Academy. See the image below for the citations of the Izvestiia of the pedagogical institute. 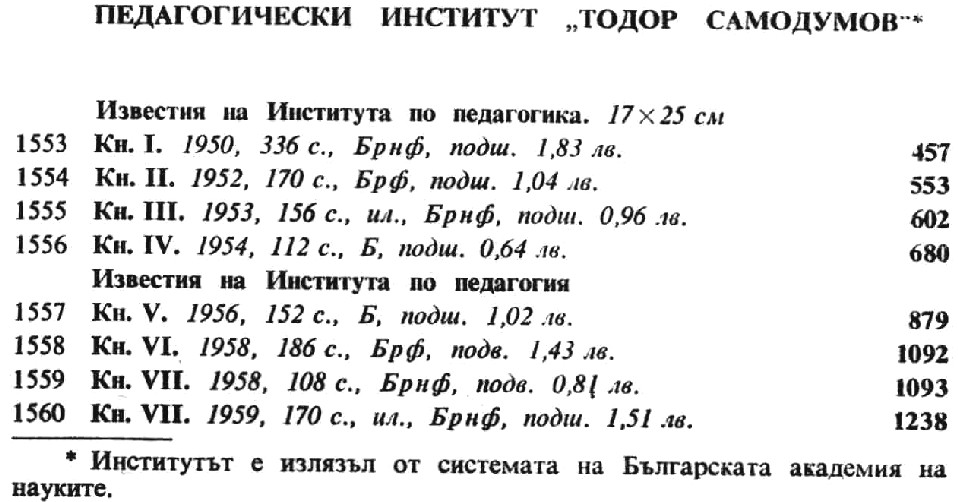 Other volumes were published to cover later years such as the compilation for 1969-1980 as well as individual catalogs for every year since 1969. For some years the individual annual catalogs have more bibliographic detail such as contents of anthologies than the 1969-1980 compilation. 1988 may have been the last volume published.

Bibliographies of Other Publishers 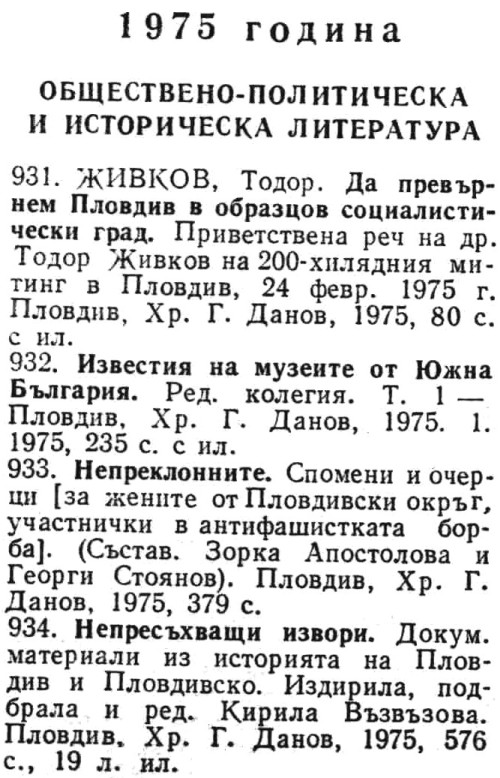 Khristo Danov was the founder of the first publishing house in Bulgaria. This bibliography recounts all of the Danov publisher’s output from 1855-1980. The bibliography is divided into 2 sections: 1855-1947 and 1960-1980 (actually up to 1979). Within each of these sections the citations are arranged chronologically. At the very end of the first section is the listing for periodical editions and an index of authors and compilers. The second section, although also chronologically arranged, divides the citations into several broad categories: Socio-political and historical works, Technical, medical, and agricultural works, and Belles-Lettres. An author index also appears at the end of this section as well as indexes for translator and illustrator. In 1947 the Danov publishing house was nationalized, but it was reestablished in in 1960. The final part of the work is a list of the titles that were scheduled to appear in 1980. See the image on the left for the first items that appear under 1975.

This is essentially a catalog for the publishing house of Bulgarski pisatel which was founded in 1947 to print contemporary and classic Bulgarian literature. This volume continues two earlier volumes which together cover the entire monographic output of the firm. Items are listed chronologically and then by author. The entries give complete bibliographic information as well as the contents of anthologies. Some entries also have brief annotations. There is an index for names and a list of titles that have compilers, rather than authors. See the image below for Maistori by Racho Stoianov.

These bibliographies cover the publishing output (both books and periodical articles) of the press of Sofiia University from 1904-1975. The first volume of the bibliography is divided into two parts: an alphabetical catalog by author’s name with a subject index to university publications and a catalog of the university publications by series/serial title. A second volume covers the years 1943-1946 and includes additions to 1904-1942. Subsequent volumes are arranged by department within the university including sections devoted to works in languages other than Bulgaria with indexes for author, subject, and personalia. See the image below for the contents of volume 49, book 1 of Godishnik na Sofiiskiia Universitet, Filosofsko-istoricheski fakultet. 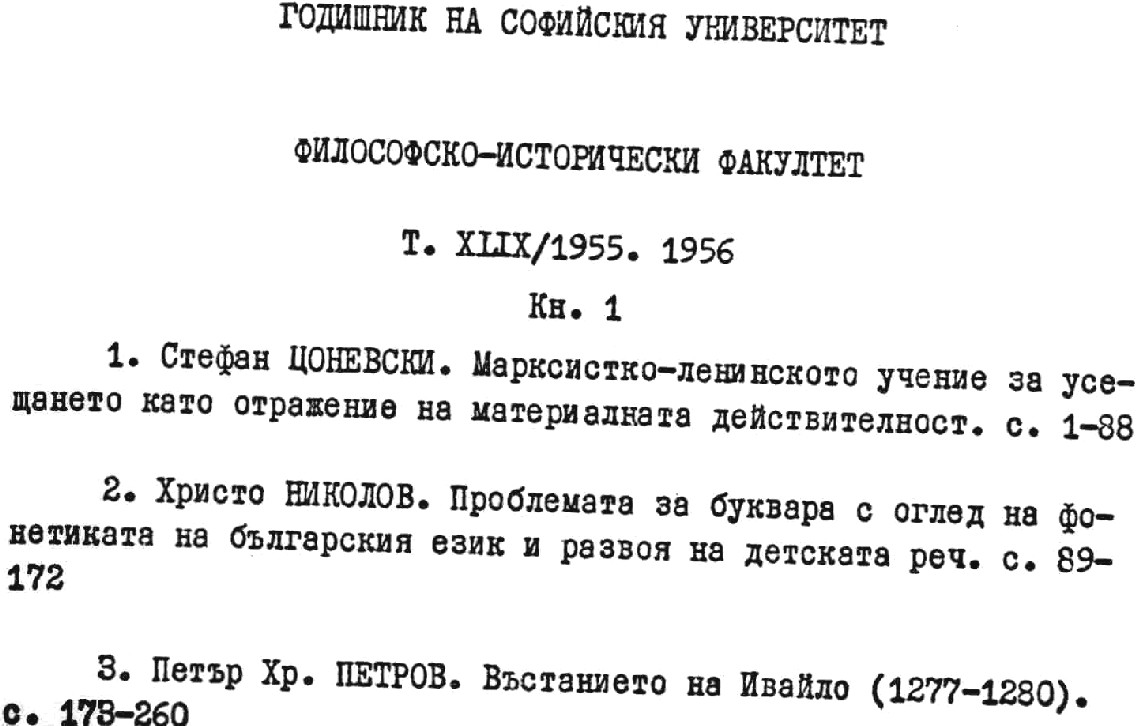 Both of these volumes were prepared by the same bibliographers and published under the aegis of the library at the University of Sofiia, the oldest institute of higher education in Bulgaria. Together they cover over 40 years of Bulgarian dissertations beginning with 1929, the year that the first dissertations appeared based on the 1928 ruling that established a standard system for awarding doctoral degrees. In 1951 a new system was implemented which resulted in two different degrees, and thus two different types of theses, both of which are included in these bibliographies. The introduction explains which subject degrees are not covered by the bibliographies, for instance those in veterinary medicine (for the first volume only), etc. Since the first volume straddles the 1951 change, it is divided into two chronological sections, one for 1929-1950 and another for 1951-1965. Within each of these sections the citations are arranged by subject, as is the entire volume covering 1965-1972. Within each subject they are arranged by institution and then by defense date. Citations include author, title, institution, size, defense date and information about the “avtoreferat” or summary. There are indexes for authors, subjects, summaries in foreign languages, and educational institutions. See the image below for a dissertation on architecture from 1965. 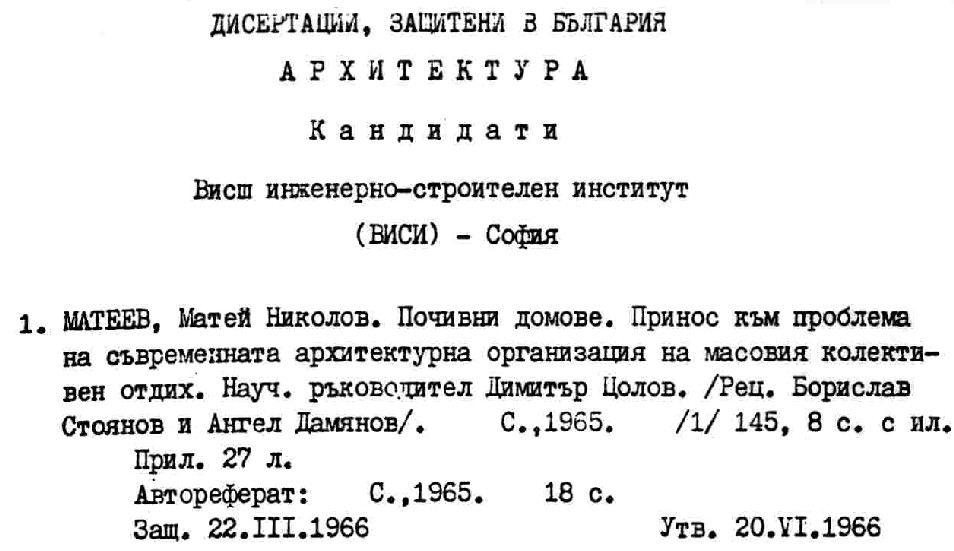