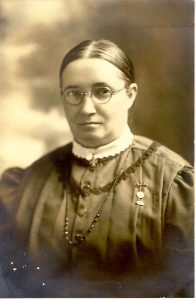 Marion Emeline Sparks was born on December 5, 1872, on a farm in Miller Township (LaSalle County), Illinois. Her parents, George and Esther Peacock (Clifton) Sparks both taught in elementary country schools. She had a sister, Annie Elnora, six years her junior. Sparks Family Photo from 1907

Sparks attended both Seneca and Marseilles High Schools before graduating from Ottawa Township High School in 1892. She attended the University of Illinois in Urbana, Illinois, earning three degrees over the course of the next eight years; Sparks received a Bachelor of Arts in classics in 1895, a Bachelor of Library Science in 1899, and a Master of Arts in classics in 1900.

From 1899-1904, Sparks held several temporary positions organizing library collections across the Midwest. In 1904, she returned to Urbana and resided at 1205 West Springfield Avenue* (and later moved to 1107 West Oregon Street). She began her employment at the University of Illinois, where she served as a bibliographer until 1911. It was then she became a library assistant in the chemistry library; in 1913, she would earn the title of Chemistry Librarian. During her tenure as the first librarian of the first departmental library on campus, Sparks was also a pioneer in teaching the importance of researching chemical literature. She self-published a critically acclaimed textbook based on her experiences teaching undergraduate students.

Sparks remained Chemistry Librarian until her death on Sunday, February 10, 1929. She died following a major operation. Funeral services were held on February 12. She is buried in West Unity, Ohio, with her parents. After her death, the university formed a Sparks Memorial Committee, which created a plaque (donated by the Association of Illinois Chemists) in her memory in April 1930. The plaque remains prominently displayed in the Chemistry Library today.

*This page is from the following book owned by the Champaign County Historical Archives located at the Urbana Free Library. The reproduction is available courtesy of the Archives.