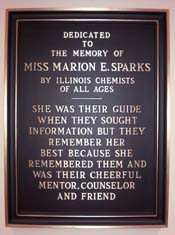 Marion Emeline Sparks (1872-1929) was the University of Illinois’ first chemistry librarian. She began working at the Chemistry Library as a bibliographer in 1911, became head librarian in 1913, and held that position until her death in 1929. During her tenure as librarian, she taught classes in chemical literature, published papers and books on chemical information, conducted bibliographic research, translated foreign language publications in chemistry, and became a trusted colleague of chemistry library patrons. In 1919, she authored and self-published Chemical Literature and Its Use; in 1921, she released an updated second edition, with the goal of training Illinois chemists to understand and contribute to the literature of chemical sciences.

Miss Sparks was a holistic librarian before the term was coined. Her many interests and talents are represented in these pages. This website is dedicated to furthering knowledge of Miss Sparks’ life and teachings. Between attending the University of Illinois as a student and her employment there, she spent nearly forty years on campus. A plaque hangs in her memory in the Chemistry Library, and her influence is felt throughout the library.