The National News was created by editor Carl E. Person after the shutdown of the Strike Bulletin in May 1915. National News began publication only a few months later in October of that year. Person was a famous labor activist who had been put on trial in 1914 for shooting a strike breaker and was later acquitted on the basis of self-defense. Much like Strike Bulletin, the National News was devoted to describing collective labor actions across the United States. However, it also contained excerpts from the some of the latest popular fiction of the day including a novel The Abysmal Brute by Jack London. Person centered the National News in Chicago instead of his earlier location in Clinton, Illinois due to his feelings that Clinton had become a hostile work environment following the end of the Illinois Central Shopmen’s Strike and his near-fatal encounter. 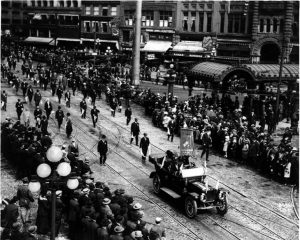 Person was an energetic but argumentative editor who frequently clashed with his peers in the labor unionist movement. National News, as a labor unionist organ, relied heavily on subscriptions from different unions. Some union leaders, such as the men who led the Shopmen’s strike, were in conflict with Person never subscribed or paid these dues. Person damaged his relationship with union leaders because he was quick to criticize those he felt had sold out or buckled under pressure during the strike. Person wrote in a February 12, 1916 editorial “Do not ask us to serve you, unless you are doing something for the National News. If you want a paper to serve you…then see to it that your union is supporting this paper”. His bluntness endeared him to laborers, even as it enraged their organizers.

The National News received most of its articles from freelance writers within the labor movement. Articles within the National News included “Health Insurance” about an attempt to pass universal healthcare legislation in the New York legislature, and “Detroit Strikers Are Making Progress” about a strike in a Michigan screw factory. Unlike many labor focused newspapers of the period the National News did include commercial advertisements. Carl Person had been hurt by internal union rivalries when running the Strike Bulletin, he tried to make the National News financially independent. 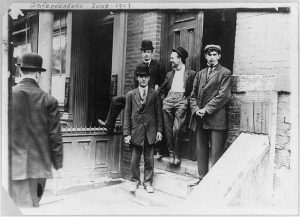 The National News never became profitable and in January 1916 it cut its publication frequency from weekly to monthly. According to Person “the support the paper has received does not warrant publishing every week,” although he added hopefully that “as soon as we get sufficient support, and the circulation is increased to warrant it, the paper will again be published weekly.” Such a moment never came, and the National News struggled to keep publishing. In May 1916 the National News unceremoniously published its last edition. After the National News went bankrupt Carl E Person left the newspaper business altogether and entered law school. He spent the rest of his life as a practicing attorney.

The National News was digitized with funding from the National Endowment for the Humanities, as part of the National Digital Newspaper Program.