Are you an overworked farm wife?

Short on time but long of mouths to feed? Between weeding the garden, scrubbing and hanging out the wash to dry, visiting your sick neighbors, baking goods for the church social, repairing worn clothing, taking care of the chickens, churning butter and selling it to the local store, and seeing to the comfort of the extra farm hands during harvest season, a busy farm wife such as yourself just doesn’t have the time to slave over a hot stove for hours a day! And in the summer, no one wants a stove heating up the kitchen for hours on end!

What would you say if I could offer you a kitchen appliance that uses no electricity or fuel but cooks vegetables through and through, simmers meat so that it practically melts in your mouth, and all of this in a delicious broth or gravy? Have I got a deal for you! Write me for your FREE catalogue of our line of fireless stoves, well-constructed and ready-to-use the second it’s delivered, or for just $1.25, I’ll send you an illustrated pamphlet describing how to build one yourself that will cook your food using NO fuel, will NOT heat up your kitchen, is HANDS-OFF until ready to eat, and your meal (breakfast, dinner, or supper) is ready in a FLASH!

YOU NEED A Hay Stove!

While correcting text in the Illinois Digital Newspaper Collections (IDNC) a couple of months ago, I came across a term I’d never heard before: hay stove. I figured it was like a wood stove but used hay instead of wood. I was wrong. I discovered this was a stove without external heat applied to it; it was a stove that had an item in it that was already hot, and its job was to keep it hot through efficient insulation. A ‘slow cooker’ or ‘crock pot’ but without additional heat being applied to the food like our modern-day electric namesakes.

The History of the Hay Stove

Simply put, the design is that of a sealable box, lined with an insulating material that would hold a preheated food container maintaining the temperature of the food, allowing the food to continue cooking while it remains in the box. Sometimes hot bricks or iron plates were also placed in the hay stove to add to and help maintain the temperature.[6]

For an in-depth introduction to the science behind the design of the hay stoves (particularly the efficacy of the various materials used for insulation, with experimental data presented in tables and graphs), see Huntington’s Fireless Cooker.[7] 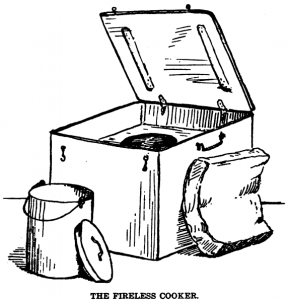 In 1906, “In the Dairy,” a column in the Farmer’s Wife, provided no-nonsense, step-by-step instructions:

Alternative designs, including a hay stove made from a shoe box, are described in the Illustrated Lecture on the Home-made Fireless Cooker.[9] 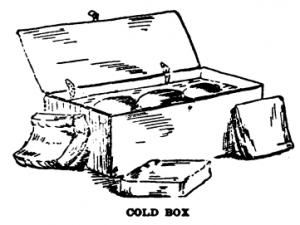 In 1910, “A Homemaker’s Club,” a section in the Farmer’s Voice, mentions the hay stove being scooted under a table along the edge of the kitchen, to be pulled out, loaded, and then pushed back under the table for use. It could be moved outdoors if it generated too much heat in the summer (but it really shouldn’t generate heat if it is insulated correctly).[12] Wheels could be added to the bottom for mobility; it could be taken to the yard, shed, or even on picnics and then wheeled back into the kitchen for storage. I’d think that a rope handle would come in ‘handy’ if that were done often. What about making a small hay stove to carry back and forth to work away from the house? They had those too: the insulated pail. 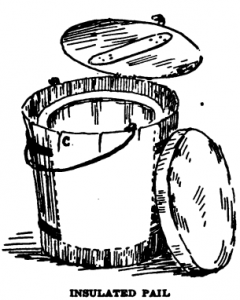 An article in the Ohio Farmer’s “Household Department” section even suggests repurposing an old chest or trunk if you don’t want to build a box or buy a ready-made hay stove. One of the writers of this article explains that she converted an old ice chest into a hay stove by plugging up the drain hole. The authors point out that if you’re only going to use one food container, the box needs only to be three to four inches larger than the container in all directions. Some folks get rather elaborate and have one large container and two smaller ones, placing the smaller ones on top of the larger one in the box.[13]

For the latest instructions on how to construct a hay stove, go to the Solar Cooker at CantinaWest website.[14]

How to Use the Hay Stove

To start with, the food was heated on the regular (fueled) stove in kettles, tightly-lidded enamel graniteware or earthenware (also known as crocks).[15] The food must first be brought to a boil and cooked for a length of time so that the food is heated through (the length of time depended on the type of food being prepared). Some food needed only a few minutes (soft vegetables like cauliflower); others needed more time (meats). The foods were transferred into the hay stove in the pots they were heated in to help maintain the temperature. Food was kept hot (as near to boiling point as possible) by not lifting the lid while the pot was in the hay stove. That would defeat its purpose of the hay stove. The only time this rule would be broken was when softer/less dense vegetables were added to a soup consisting of meat or dense vegetables already in the hay stove. The pot in the hay stove would be removed and its contents reheated to boiling when the new (softer/less dense) vegetables were added in. Then the pot would be replaced in the hay stove to continue cooking.

Anything that was to be served ‘crispy’ was not a candidate for the hay-stove, including slices of beef, cutlets, and pancakes.[16] No doughnuts; no pies, but steamed breads could be cooked in the hay stove. Steamed breads were placed in a regular stove after the hay stove to ‘crisp’ up the crust. In general, if your food was prepared in the hay-stove, your food was WET.

In the next blog post, we’ll get down to prepping the food—we need to see some recipes!

The newspapers in the Illinois Digital Newspaper Collections are searchable because of computer-generated text that underlies the page images. This computer-generated text is far from perfect! You can help improve the accuracy of keyword searches by correcting errors. Thanks to the hard work of volunteer text correctors, more than a million lines of text have been corrected so far.

Register to become a text corrector.

Learn more about how to help correct newspaper text.