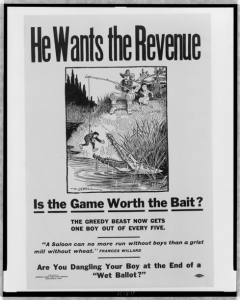 The January 19, 1906 edition of the Illinois Issue explains that “Our purpose is to set before the people of this state, in a plain way, plain facts in regard to the greatest enemy of the home, the church and the state, and the greatest lawbreaker in civilization—the organized liquor traffic.” The Illinois Issue, edited by James K. Shields, successfully shaped public opinion within Illinois against the sale of alcohol. Through the use of articles and political cartoons, the Illinois Issue galvanized believers in the temperance cause. Much like the national temperance movement, the Illinois Issue possessed a strong undercurrent of nativist political beliefs. 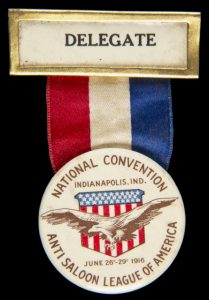 The Great Depression’s economic effects made the idea of tax revenue from liquor sales broadly appealing politically. By 1932 the American Issue spent many of its articles attempting to rebut the claims of anti-prohibition activists. The May 1932 edition argued, “More than ten times as much beer would have to be made as was produced before the war. Or more than ten times the tax would have to be levied on the beer drinker, to bring in the revenue promised by the wets”. The American Issue remained committed to prohibition until the end. Finally, in December 1933, the 18th amendment was overturned. Prohibition was over, and groups such as the Anti-Saloon League and their publications went into permanent decline. The American Issue ended publication in 1942.