What is our responsibility? This was the title of the speech Mrs. Loraine Richardson Green speech gave at the St. Mark’s Lyceum in March 1922. This event, meant to take place on the following Sunday, was mentioned in the March 25, 1922 issue of the Chicago Whip.

Mrs. Green obviously felt her responsibility was serving her community, a commitment she followed through on for many years of her life. One of Green’s accomplishments was being the first African American woman to earn a master’s degree from the University of Chicago’s Department of Sociology in June 1919. Green served as the second president of Alpha Kappa Alpha Sorority, Incorporated, from 1919 to 1921. One of her other triumphs was being the first African American woman appointed to Chicago Public Schools’ Board of Education in 1958; she served in this capacity for 11 years.

Additionally, Loraine Richardson Green worked to improve the lives of many Chicago citizens in many ways. She served on the Chicago Commission on Human Relations for two decades, the Illinois State Training Schools for Girls’ Board, and chaired the Welfare Council of Metropolitan Chicago’s Department of Education and Recreation.

The remarkable Mrs. Green lived to be 106. She passed away in January 1996. Read more about her singular life and other women who served in their communities at the Illinois Newspaper project website. 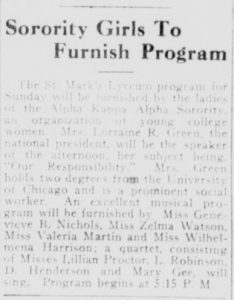