The Iakut Autonomous Soviet Socialist Republic (IaASSR), in Northeast Siberia, was created in 1922. In 1992, it officially became part of the Russian Federation, under the name Sakha Republic. The capital is Iakutsk. Sakha is a Turkic language and is also referred to as Yakut and as Yakut-Sakhat.

The following is a beginning guide to bibliographic tools for researchers of Sakha. Though not a comprehensive overview, this guide outlines two primary ways research can access bibliographic information about Sakha publications.

Additionally, this guide highlights several other sources related to the history, culture, and language of Sakha (Iakutiia). Researchers may also want to consult the following online database for additional coverage: Elektronnyi katalog knig na iazykakh narodov RF i stran SNG from the Russian National Library. Lastly, this guide highlights the electronic library associated with the National Library of Sakha.

The electronic catalogs (elektronnye katalogi) provide a way for users to obtain bibliographic information about the holdings at the National Library and other documents related to the Republic of Sakha. These catalogs are bibliographic databases where users can search by the following fields: author, title, subject, field, language of publication, range of dates of publication, publication type and the region in which the document was published. The search interface is in Russian. The following image shows the interface for the advanced search.

The available bibliographic information differs by entry, but generally, users can obtain information about the author, title, source name, search number, date of publication and the language of the text (note: to ensure you are seeing all bibliographic information related to an entry, select the entry and then use the menu on the left hand side to choose “pol’nyi” under “vyvoda” and then press “pokazat’”). The following image shows a sample result.

While the catalogs share the same user interface, each catalog has a separate link for access. A brief description of each catalog is given below. These catalogs can only be accessed through the Electronic Catalogs Page (elektronnye katalogi) and links for the individual catalogs can be found there. Please note that due to maintenance issues these websites may time out, but this can be corrected by refreshing the page.

The Union Catalog of all of the libraries of the Republic of Sakha. This catalog includes books, brochures, bibliographic publications, abstracts of dissertations, periodicals and continuing publications, music documents, cartographic documents, electronic resources and visual print materials from multiple libraries. Information about the location of items is also available through this database.

A catalog of local history since 1991 that draws from the National Library, other local libraries and even from foreign countries outside of the Republic to gather documents related to local Sakha history. It includes information about newspapers, journals, bulletins, thematic collections and articles. It has documents in Russian, Sakha, foreign languages and the languages of minority groups in the Sakha Republic.

Svodnyi katalog literatury korennykh malochislennykh narodov Severa, Sibiri i Dal’nego Vostoka
This database specifically contains literature and sources about, and in the languages of, the minority groups of Northern and Eastern Russia, and Siberia. Examples are Nenets, Evensk, Iukagir, and Dolgan.

The following catalogs are restricted to specifically search within the National Library of the Republic of Sakha.

This is a catalog of local history since 1819 and includes: books, brochures, bibliographic publications, abstracts of dissertations, periodical and continuing publications, music documents, visual print documents, cartographic documents and electronic resources. This catalog has documents in Russian, Sakha, minority languages of the Sakha Republic and foreign languages.

This catalog contains official documents of the Republic of Sakha since 2005. Documents are in Russian and Sakha. Bibliographic information includes the title of the document, its form, the date of agreement regarding a particular law, the authorities who approved the document, and those who put it into action.

This is a book catalog with information from Russian-language sources since 2000, including articles, literature, magazines and newspapers.

The Russian National Library’s Department of Literature in National Languages [also known as the Department of National Literatures] of the Russian Federation, Commonwealth of Independent States, and the Baltic countries has reproduced holdings catalogs in microfiche format. The national languages imprints catalogs in microfiche format diffuse most of the difficulties associated with transliteration in the vernacular languages, spelling, forms of entry, and uncertainties with the entirety of the collection. Researchers can access the complete holdings for a specific language at the Russian National Library through this microfiche set, conveniently exporting selected titles via PDF scans. The following scans reflect some of the Sakha-language holdings available in microfiche format. As can be seen, there are records in both Cyrillic and Latin script. 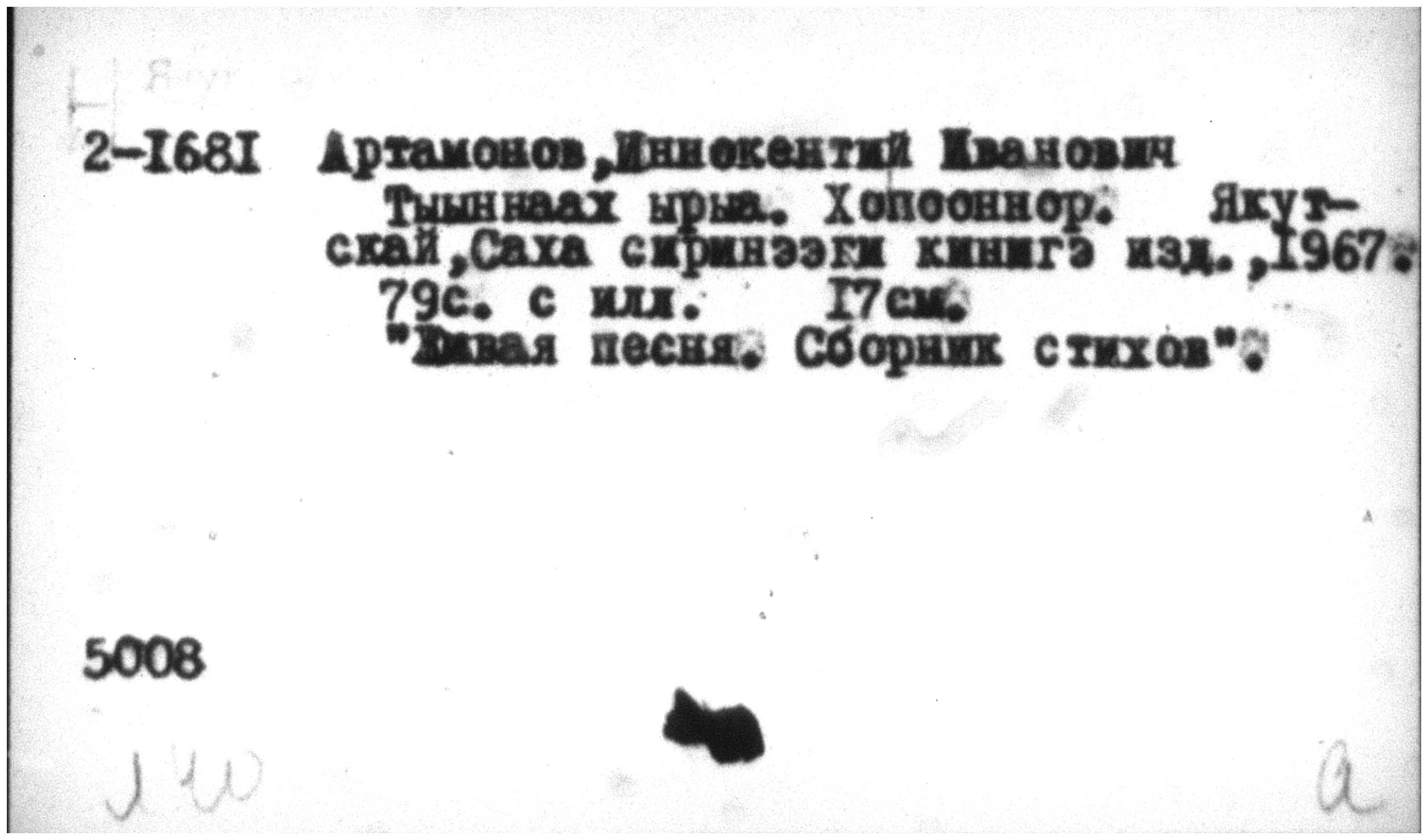 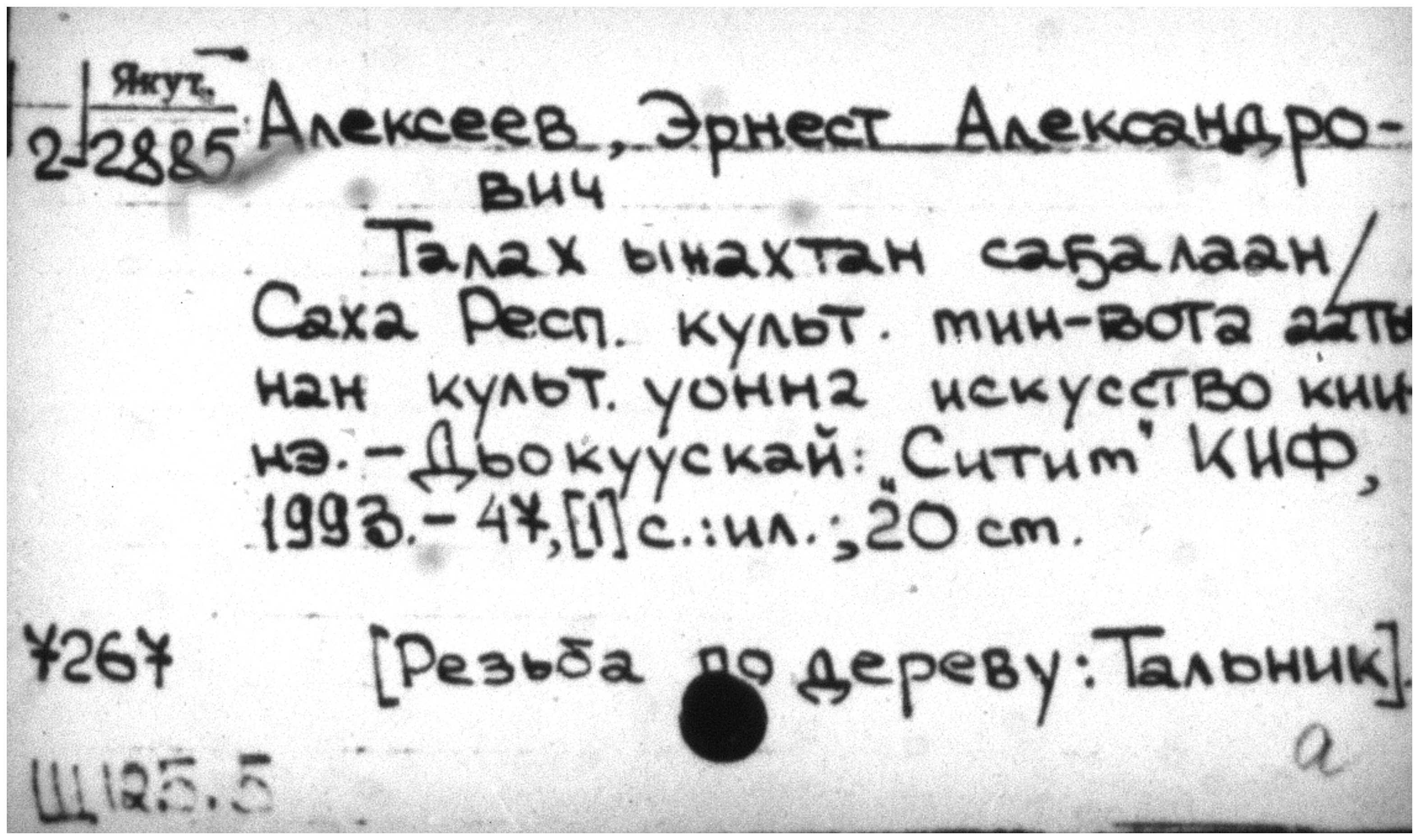 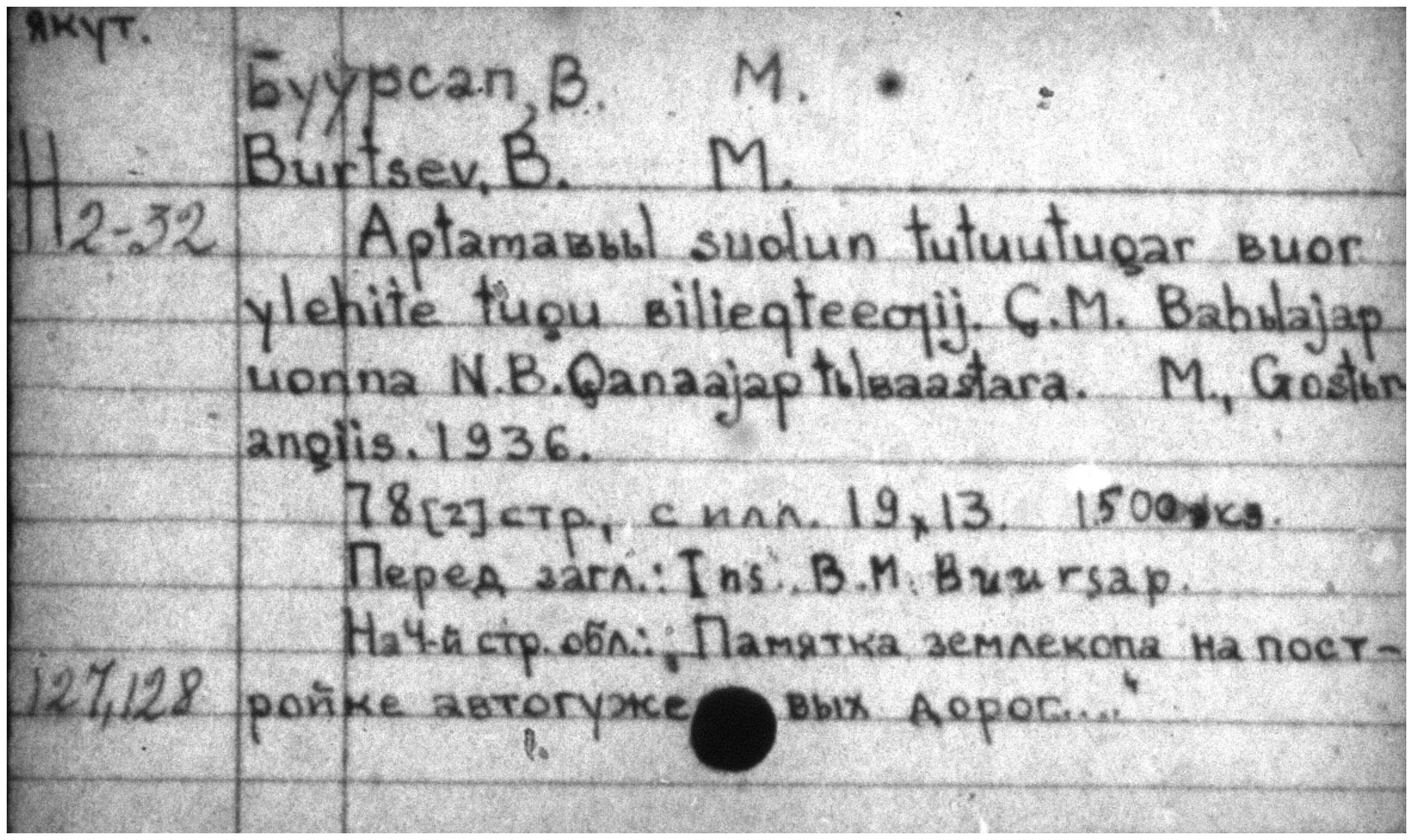 This is an electronic database associated with the National Library of the Republic of Sakha. The database has 8,000 documents at the time of writing, but the content is updated daily. The database includes books, periodicals and articles, as well as digitized version of rare collections of the Sakha National Library. The period of coverage is large, ranging from the 1800s to the 2000s. The image below shows the interface for advanced searches. 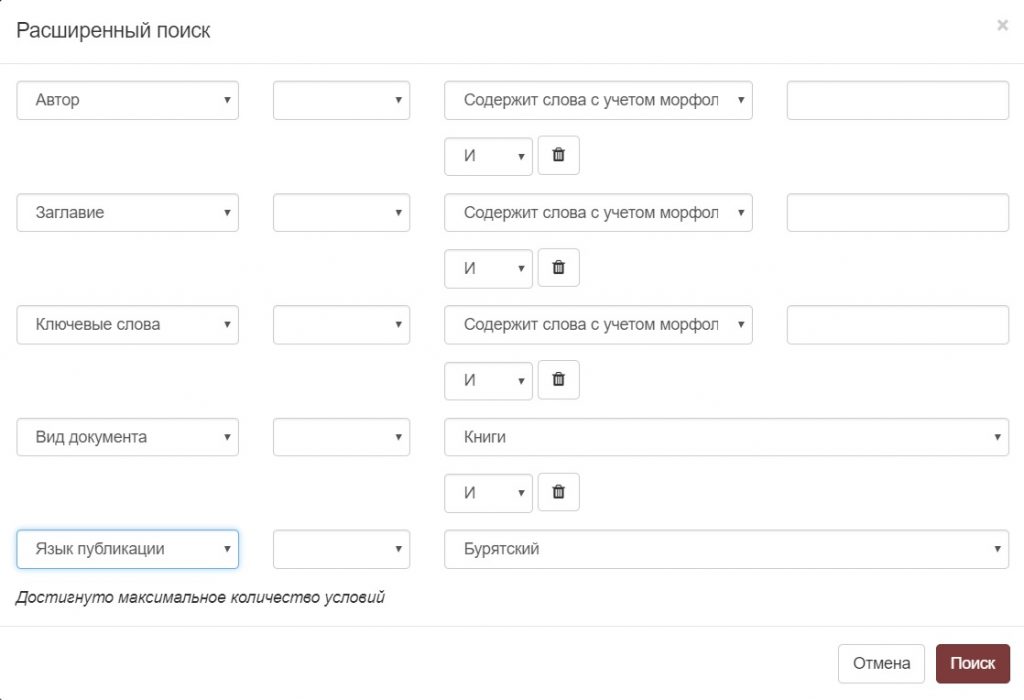 Users can search by: author, title, publisher, place of publication, key word, subject, serial number, special code, date of publication, publication type, type of document, language of publication and asset holder and can browse by collection and topic. Users may search in Sakha and in Russian, as the database includes books in both languages. The site must be navigated in Russian. Searches and browsing gives users access to basic bibliographic information. The image below shows the results of searches in this electronic library. Most of the documents in this database require registration for access. Please note that due to maintenance issues this website may time out, but this can be corrected by refreshing the page. 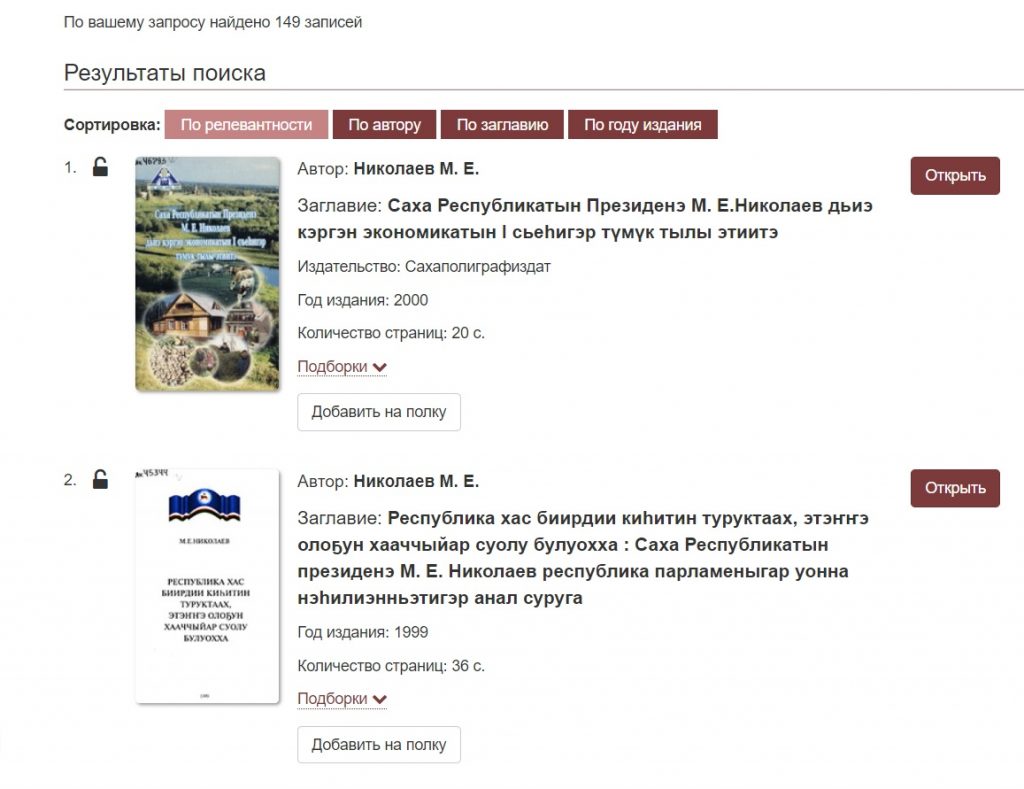 The largest library in the Sakha (Iakutiia) Republic and the Northeast of Russia is the National Library. It holds 1.8 million items, including rare Sakha-language materials, materials in the minority languages of North, and literature about Sakha. The National Library of Sakha currently covers the responsibilities of the Book Chamber for the republic, and it creates and maintains an archive with materials published in the republic, to ensure the preservation of the republic’s national bibliography. The electronic library collection of the archive includes 8,000 documents, including rare materials. The National Library is the center of national and local bibliographies of the Republic, and the Book Chamber publishes annually a letopis’ pechati – a bibliographic overview of all the books, articles, newspapers, music, and pamphlets published in Sakha in a given year. Through WorldCat, users can find issues of the letopis’ pechati in physical (OCLC accession number 11481703 or 38926606) and electronic form (OCLC accession number 655897604).

In 1979, 149 books and pamphlets (1.2 million copies) were published in Sakha/Iakutiia. The following is a list of select newspapers: Kyym (1923) in Sakha/Yakut; Eder Kommunist (1923) in Sakha/Yakut; Sotsialisticheskaia Iakutiia (1917) in Russian; and Molodezh’  Iakutii (1958) in Russian. There is also a literary and socio-political journal, Khotugu Sulus which is published in Yakut and Russian (since 1956 and 1964 respectively). Users can consult Gazety SSSR 1917-1960: Bibliograficheskii spravochnik 5 for a more comprehensive list of newspapers published in Sakha during these years.

The main archive of the Republic of Sakha (Iakutiia) is the National Archive. In addition to information about the archive’s history and services, the archive’s website provides two extensive archival guides:

The guides include descriptions for many of the fonds and opisi in the collection. The National Archive is one of the largest archives in the Northeastern part of Russia, and its collection includes more than 1.3 million documents in ten languages, and more than 13,000 visual materials. The archive’s library holds more than 8,000 books, including rare publications. The library also has a unique newspaper collection from the pre-revolutionary and Soviet periods. The archive’s collections cover the period from 1649 to the present.

The project Pamiat’ Iakutii was initiated by the government of Sakha (Iakutiia). Its goal is to preserve and spread knowledge about the history and rich cultural traditions of Sakha, and the formation of a positive image of the republic in Russia and abroad. It provides free access to rare and valuable materials of the National Library of Sakha, the Sakha National Archive, the E.M. Iaroslavskii State museum of the history and culture of the peoples of the North, and the National repository for video materials about the Republic. For example, users can find electronic copies of the first books in Sakha. The section of the National bibliography of the Sakha (Iakutiia) Republic provides major bibliographical materials, such as the “bibliography of Iakutiia” by N.N. Gribanovskii, and the letopis’ pechati Iakutii. The collection also includes a large number of rare historical materials associated with the Sakha government in the 18th and 19th centuries, and a large collection of audio, video, and photographs.

Irkipedia: Istoricheskaia entsiklopediia Sibiri is an online historical encyclopedia for Siberia. The website provides access to a large number of materials that users can search by various categories such as geographic area, theme, name, organization, chronology, bibliographies, media, and different types of primary sources. In the section that specifically focuses on Sakha, users can find information about:

Sakha is a Turkic language and is also referred to as Yakut and as Yakut-Sakhat. Until the early 1920s, the written Sakha language was based on the Cyrillic script. Between 1924 and 1929, the language was based on S.A. Novgorodov’s International Phonetic Alphabet. In 1929, as in many other national republics of the Soviet Union, the script was changed to Latin. The current alphabet, based on the Cyrillic script, was introduced in 1939. In addition to the letters of the Russian alphabet, it has five distinct letters: Ҕҕ, Ҥҥ, Өө, Һһ, and Үү. Users interested in working with vernacular languages, can download a Cyrillic extended keyboard that can be used for Sakha and many of the other languages of the Russian Federation.