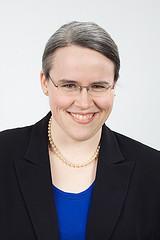 Copyright chat is a podcast dedicated to discussing important copyright matters. Host Sara Benson the copyright librarian from the University of Illinois converses with experts from across the globe to engage the public with rights issues relevant to their daily lives.

Copyright Chat is pleased to host Nancy Sims today in lovely Los Angeles.  Nancy is the library’s subject specialist on copyright issues at the University of Minnesota.  She’s a real live librarian with long experience working in academic libraries.  She’s also a lawyer and is fascinated by the pervasiveness of copyright issues in everyday life.

Sara: Great, we’re glad to have you. I wanted to see if you would tell listeners how you got into copyright?

Nancy: Sure–go back far enough and I was a little bit of a computer nerd from fairly early on but only a little bit. But it sort of is a bit of a thread. Even from when I was a pretty small kid, I had a computer that I needled around with in my own room because my dad had computers around. And that is something that got me in my first job as a grown up, and I ended up doing a lot of computer support just because I was comfortable with them. And when I went to a library school, I ended up being the person who knew how to talk to the professors who did coding and tell them things like you’re teaching us methods of coding that are ten years out of date. And I wasn’t, like, up to date, but I knew enough to know that they were out of date, so I’ve always been on the cusp of knowing a lot about computers. So, more than many people, but not as much as somebody whose whole existence is computing, and that is sort of the niche I ended up in libraries from the very beginning. In library school I got involved in helping other people with coding-related assignments and then later helping people understand software that they hadn’t used before. And my first library job was as the Instructional Technology Librarian at the University of Michigan where we did things like help people use Photoshop to edit photos for publications but not lie with their photos with publications or learn how to use endnote or make a poster for a conference. And in all of that tech stuff has copyright threaded all through it. And so I was fielding questions like, “How do I rip from a DVD?” And then eventually somebody tells you that you can’t rip from a DVD because of copyright, and I wanted to know more about that. Eventually it became such a big part of what it was doing in terms of tech-related work that I decided I wanted to know the law side too. I actually just walked across the street to go to law school from my job at the University of Michigan library to the University of Michigan law school.

Sara: Well, that’s an interesting story. Sounds like it was pretty fortunate that you were so close to such a great law school at the same time when you became interested in it. So most recently I saw an article that you wrote about rights and the Creative Commons and online digital collections, and I wondered if you could explain to listeners a little bit about that article and what you were talking about there.

Nancy: Sure, the article came out of–it was for a scholarly communications column, but I wanted to write about how we talk about our collections. And so framing it as a scholarly communications this year was an interesting approach for me, anyway. How we communicate rights status has big effects for our users and for whether people can use things in their scholarship. That was part of the framing of that column. One of the reasons I was interested in the issue right now is because there’s been the development of the rights statements from the rightsstatements.org work, and I’ve been interested in how we will apply those, and I’m really excited; they’re really useful tools, and also I’m always excited by people who’ve been trying to get there previously. But a lot of our attempts to get there previously have not quite worked or in fact some of them were not really attempts to communicate with users at all. So the piece that we’re referring to kind of outlines a couple of different ways we’ve been wrong or confusing or legally incorrect when we’re trying to communicate how people can use things. Among other things some people have been attempting to use Creative Commons to indicate, “Yes, you can use this.” But for me, and really one of the reasons why the rightsstatements.org stuff is exciting, Creative Commons licenses require that you be an owner. And the whole reason copyright is a huge problem for most of our digital collections is because we aren’t usually the owners. So if copyright is a problem for libraries and archives and museums because we don’t own the copyrights, Creative Commons shouldn’t be a way we can fix them. But we didn’t have anything better. So a couple of the things people have used Creative Commons for is an attempt to communicate about status. People have put CC BY licenses on things when they wanted to say, “This is in the public domain, please use this.” And so sometimes their whole attempt was just to make it usable. And the CC license doesn’t do that, but it was better than the unavailable stuff. But sometimes people are using CC licenses because they don’t want to give up that little thread of control. We don’t own the copyrights, but we do a lot of the time feel like we sort our own the stuff. And so CC BY says you can use it but only under our terms. I don’t think most institutions were doing that latter thing—trying to exercise control—but a few of them maybe were. In either case those CC BY licenses mess everything up. They mess up real Creative Commons licensing because when we’re issuing Creative Commons licenses on the things that we don’t own, we’re undermining Creative Commons licenses on things that people do own, and they also kind of undermine us as authorities about the status of things in our collections. And so I get that we like to own things—we’re proud of our ownership; we’re proud of our stewardship. That’s good. But we’ve got to let go of that. And so maybe Creative Commons was a necessary step along the way, but the rights statements excite me because they solve most of the problems that Creative Commons licenses had. If what you’re trying to do is communicate to users, Creative Commons didn’t get you there, and the rights statements statements do in a lot of cases, but not every one.

Sara: So this is an interesting problem that you’ve pointed to because at least we’re moving in the right step of trying to not assert control over a collection that we don’t own. For instance, it’s what Jason Mazzone would characterize as copyfraud, like saying, “Copyright University of Illinois libraries 2017.” Absolutely that’s wrong, right. So at least it was Creative Commons licensing trying to make it public. So I guess I wonder where you think maybe the biggest challenges will come in implementing these rightsstatements.org, because to me, one of the biggest challenges is looking back and trying to understand where all those rights are located.

Nancy: There’s some pretty obvious challenges in terms of staffing. I mean some of the people who have done a ton of clearance have put in hundreds and hundreds of working hours—sometimes only a couple of staff members but still hundreds and hundreds of hours of those particular people. So there’s the challenge of historical documentation of these things. There are technical challenges. In my institution we’re going to have some problems implementing them because some of our systems don’t support rights at that granularity. And so we may actually have to do some systems work before we can do the full implementation that we want to do. Some of our other systems do support that, so we’re moving forward where we can.  But probably because I have a bit of a background way back in social sciences, my undergraduate, I’m really interested in the people challenges here, and I do think that kind of feeling of ownership is still there for people, and it’s not a bad thing. I think it is only a good thing when what you really are feeling is all about the stewardship. And so one of the things that we have in some of our regional collections is these statements that don’t even try to claim copyright, but they say you have to write to us for permission. And we’ve been sort of trying to prep the stage for quite a while to help people realize no, nobody has to write to us for permission; they never have had to write to us—once you put it online, unless you put terms of use on that they have to click through and agree to, nobody needs to come back later and ask you for permission. But that’s not a bad thing. Lots of people will tell you they’re using it. Lots of people will be excited to use it. And one of those things we’re working on and trying to figure out is the best language or best approach for helping people recognize that what you really want is credit for stewardship. So what are the best ways to say the things to users that we really want to be saying. We don’t really want to be saying we own it; that’s not ever what most of us want to say. But we do want people to recognize our stewardship sometimes and also to know where to find the originals. So we’re working on things like, instead of what have the rights statement that we hope will be legally correct and then potential other bits of metadata like suggested attributions. That gets to the value that these small local institutions have and the pride that many of them have in their communities and wanting that acknowledgement. I’m really excited by those challenges, but I’m also feeling like those may be bigger challenges sometimes than I think they are. Or maybe they’ll be smaller, maybe everybody’s ready to make these shifts but the people challenges are some of the things I’m looking at.

Sara: I think that’s right, and I think the CC BY issue is the wanting that recognition of where this came from and the attribution of the effort that the librarians went through to digitize this particular collection or item. And also, again, like you said, where to find the original because that’s what attribution is all about is trying to find the best copy of whatever piece that you’re citing. I think this will be an interesting challenge going forward for librarians, and I applaud you for the work that you’ve done thus far in educating our community about these issues.

Nancy: I do have to also give credit to a bunch of different people in the community for helping me understand that I have the legal perspective—that sometimes it takes me a little bit to get where the archivist is coming from, and lots of different people, including lots of folks from the University of Minnesota archives and our regional collaborative partnerships.

Sara: Well it always takes a village; I think that’s a true statement, and I’ve noticed that since I’ve joined librarianship, it’s always a collaborative effort, so thanks for being on copyright chat today, and I look forward to future conversations with you

Nancy: Thanks for having me.