Biography & Details
Mike Thomson is one of the BBC’s most distinguished and experienced World Affairs correspondents. During his career, he has interviewed many military and political leaders including, Margaret Thatcher, George Bush, Joseph Kabila, King Hussein, Meles Zenawi and most recently the Liberian President, George Weah.

Over the last two decades, Mike has memorably covered many of the world’s most newsworthy events, including the devastating 2010 Haiti earthquake, three US Presidential elections, the fall of Muammar Gaddafi and the death of Nelson Mandela. His agenda-setting reporting has taken him to many of the world’s biggest trouble spots. These range from Syria, Iraq and Afghanistan to Somalia, Eastern DR Congo, Darfur and the FARC controlled jungles of Colombia.

About Syria’s Secret Library by Mike Thomson (from U.S. From Public Affairs) 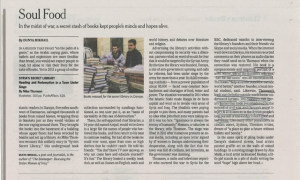