The Frederick Joseph Wells Collection consists of letters written by the science-fiction author H.G. Wells to his family members, photographs of H.G. Wells, drawings by H.G. Wells, and other documents related to H.G. Wells. The collection was compiled by H.G. Wells’s older brother, Frederick Joseph Wells. The majority of the letters in the collection are from H.G. to Frederick, and they range from short wishes for a Merry Christmas to more substantive poetic and philosophic passages about deaths in the family as well as descriptions of the destruction and the horrors of World War II.

In one such letter, dated July 21 1887, H.G. informs Frederick of the death of their cousin Lillie from the horrors of consumption:

“I am sorry to have to tell you that Aunt Hannah has just suffered another severe loss.  Lillie died last Saturday morning of … rapid destruction of lung tissue by tuberculosis. It is scarcely a fortnight since Gracie was buried, and the shock of this loss is therefore doubly intensified. I can hardly image what that house will be like now those girls have gone. It is an awful thing, this consumption.  There is no haste, no pause, no pity.  It hunts down the family that is cursed with it and one by one, inevitably, they pass away. People shudder at the conception of Frankenstein but here is a demon raised by our sins unspeakably more dreadful.”

It is well known that H.G. Wells predicted the atomic bomb in his 1914 novel The World Set Free, three decades before the atomic bombs were dropped. In this note from H.G. to Frederick on October 27, 1945, he describes his frustration at being inaccurately portrayed as not having predicted the bomb. (He often addressed his brother Frederick as “Fezzer,” “Fuzz,” or “Fezz” and often signed his letters to his family as “Busswhacker” or “Bertie.”)

I’m all right & everything misses me.  I explained the inevitableness of the atomic bomb half a century ago & it is rather infuriating to have all these journalistic halfwits explaining that here’s something Mr. Wells did not foresee. It’s a strange rightful phase this poor little planet is passing through[.] I have always been a stoic but I would be glad to see the run of mankind behaving more like stoics & less like smart Alecs than they seem to be doing.  Blessings on your fraternal // Fizz Fuzz.

It is not uncommon to find little drawings, or “picshuas,” as H.G. Wells called them, in the margins of his letters. He used these picshuas to emphasize a point, add humor to his letters, or poke fun at himself or others. For example, a letter from H.G. Wells to his mother Sara Neal Wells, on October 31, 1882, discusses his upcoming birthday and his upcoming wedding to his first wife, Isabel Neal. At the top of the letter he has drawn a pischua, depicted below, joking about the birthday present he hopes to receive from his mother. LV 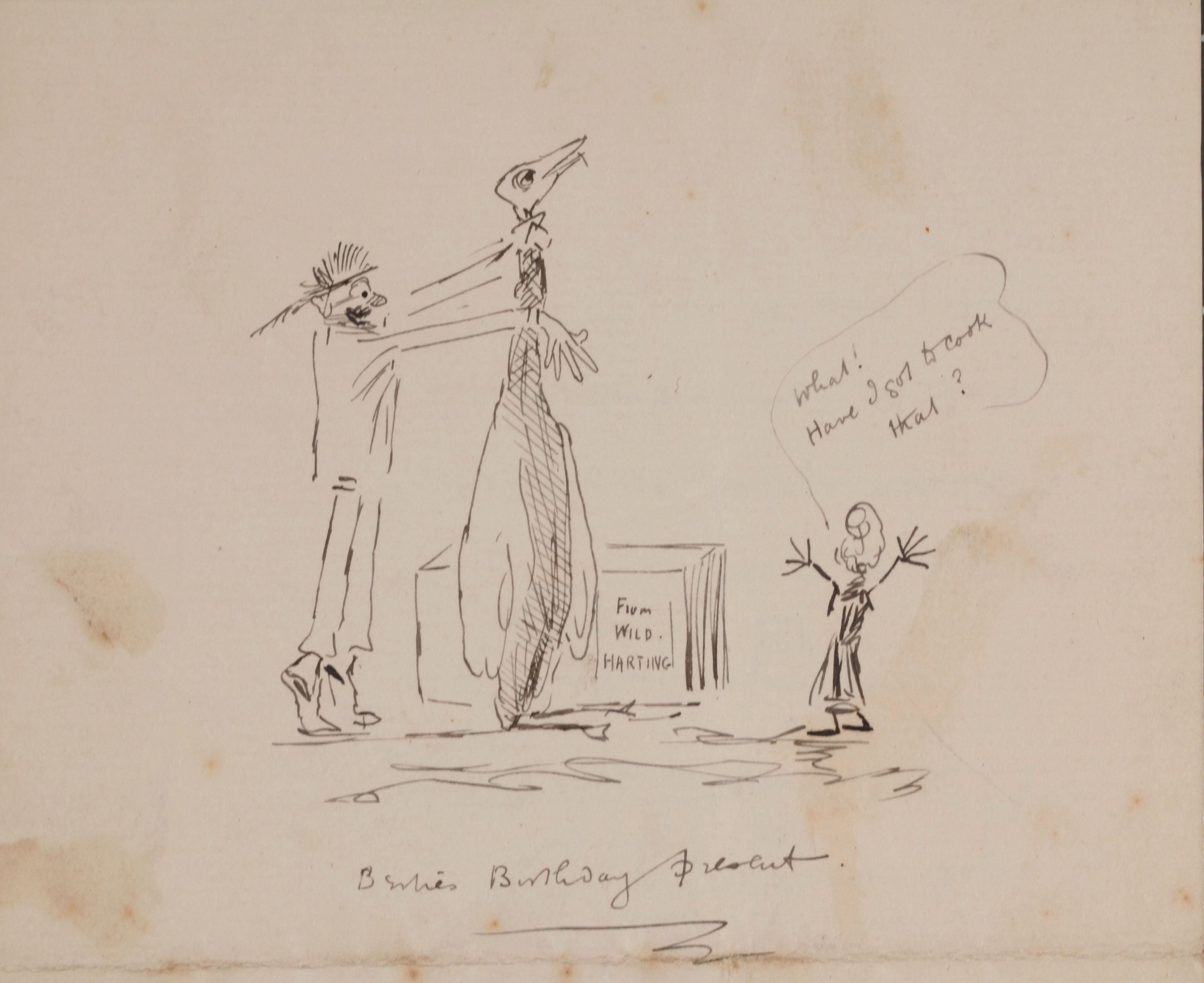