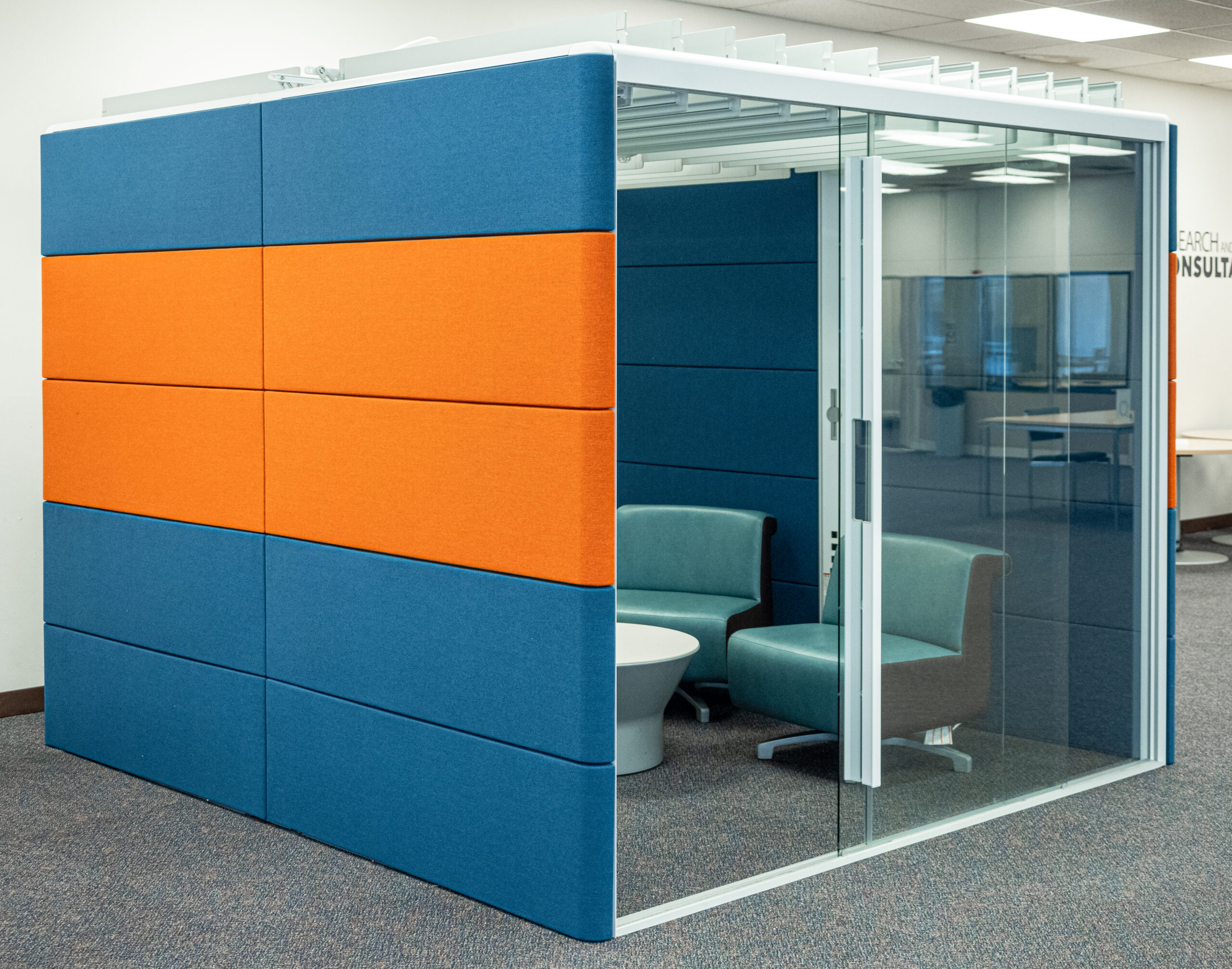 In the early days of campus, the Library sat on the first floor of University Hall, approximately where the Illini Union stands today. In what may have been a vain attempt to help students focus, men were seated on the east side, women on the west.

As the University of Illinois developed, so did efforts to assist scholarly work. Altgeld Hall—the first UI building devoted to a library—sprang up in 1897, and in 1912, President Edmund J. James urged trustees to acquire 1 million volumes within the decade. By the mid-1920s, the Main Library building opened, followed by dozens of departmental libraries, the first online catalog in the nation, and a robust interlibrary loan system. From books to buildings to brand-new ideas, the University Library—one of the largest such public entities in the world—has never stopped finding ways to better serve its patrons.

And now, enter the Orange Box.

“It’s an ongoing evolution of student space,” said David Ward ’92 LAS, MS ’98 LIS, head of the Undergraduate Library, who describes the enclosed, portable unit as ideal for group work, interviews, online classes, Zoom or Skype meetings, socialization, and access to integrated technology not available in an apartment or residence hall room. Located on the upper floor of the Undergraduate Library, the first box was funded as part of a $2.5 million gift to the Library from Megan Shebik ’80 LAS, vice chair of the Library Board of Advocates, and husband Steve ’78 BUS, ’78 BUS [see “Alumni Couple Invests in Library’s Future,” Friendscript, Fall 2020].

The Orange Box seats four to six people in a colorful and casual atmosphere—more like a living room than an office. The unit can be equipped with whiteboards, flat screens, internet access, adjustable lighting, recording capabilities, and its own ventilation system; in addition, it offers sound isolation and privacy.

“As certain colleges and disciplines on campus have started favoring more group work, we’re [offering] that type of space,” Ward said. To accommodate the trend, the Undergraduate Library had been providing 10 fabric-walled booths, which have to be bolted to a supporting wall and are somewhat larger and drabber than the inviting Orange Box. He said such spaces had been in constant demand; now, however, due to social-distancing guidelines imposed by the coronavirus pandemic, their use is restricted to one person at a time.

Ward looks to the coming autumn—when COVID-19 may be somewhat contained—as a time when bookings will heat up for the Orange Box. Additional Orange Boxes, as well as new whisper rooms—media centers where students can practice music, conduct interviews, and record podcasts—are also planned for the future (see below for a special giving opportunity).

“When you think about the way [the unit is] built—the colors, the glass enclosure, the incorporation of technology—that feels like what students are expecting that they would get [by] going to a large university,” Ward said.

After all, as study needs evolve, isn’t an Orange Box better than sitting on different sides of a room?