Architectural reconstruction of University Hall by Nico Yu-Lun Hsu from historic drawings dating from the 1870s to 1930s. 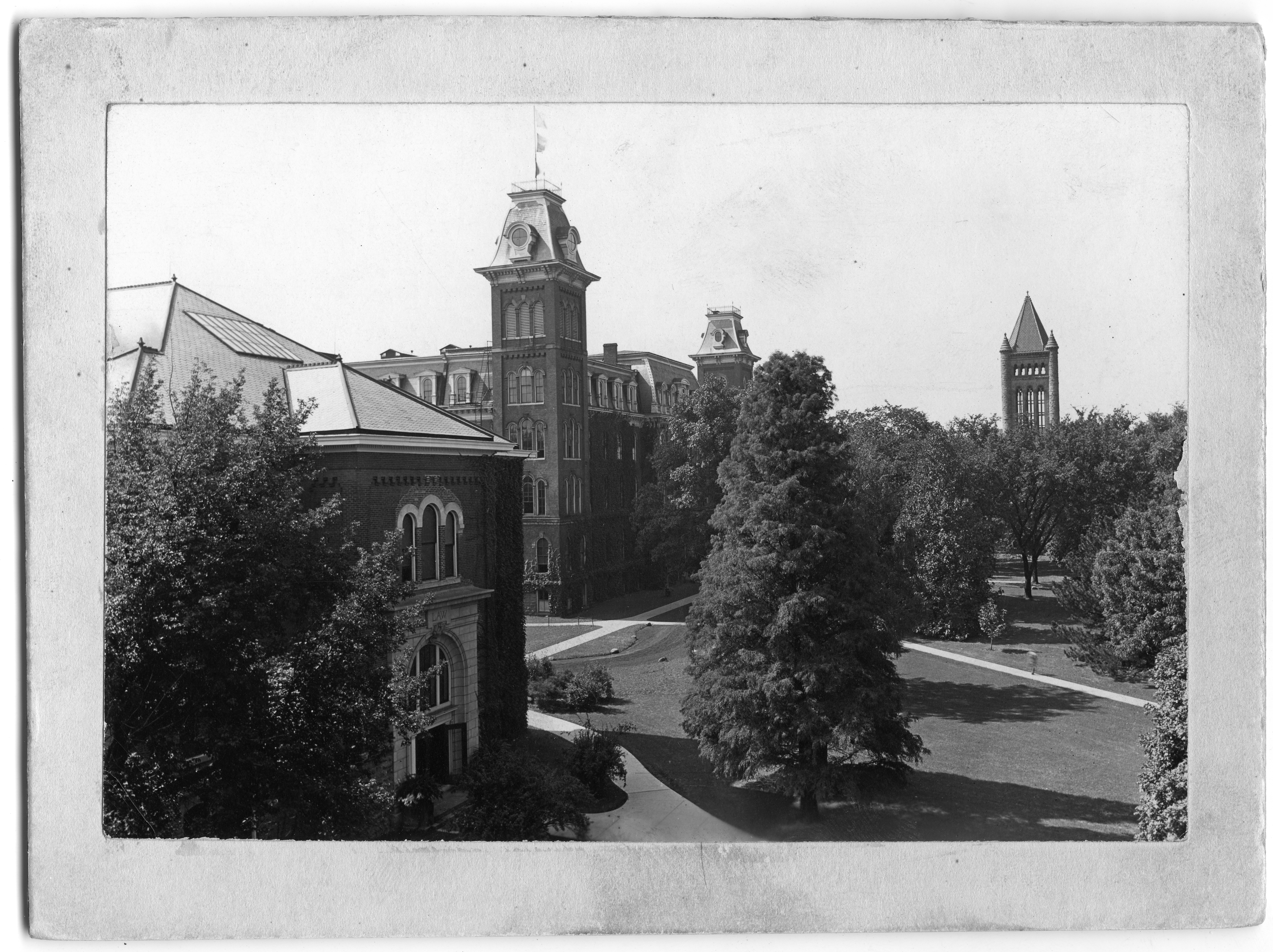 From left to right, the Law Building (Harker Hall), University Hall, and the Carillon Tower of the Altgeld Hall Library Building

The turn of the century Illinois campus featured three towers along Green Street (seen above). While Altgeld Hall remains today, its two-towered peer building is gone. On Wednesday, September 13, 1871 the cornerstone was laid for the new multiple purpose University building later known as “University Hall”. The formal dedication was Wednesday, December 10, 1873, and Illinois Governor J.L. Beveridge gave the address. For seventy-six years, University Hall served most of the University population. Today, the Illini Union stands on University Hall’s former site, and all that physically remains is the bell, the clock, and the sandstone portal entrance (now, since 1998, at the Hallene Gateway Plaza). 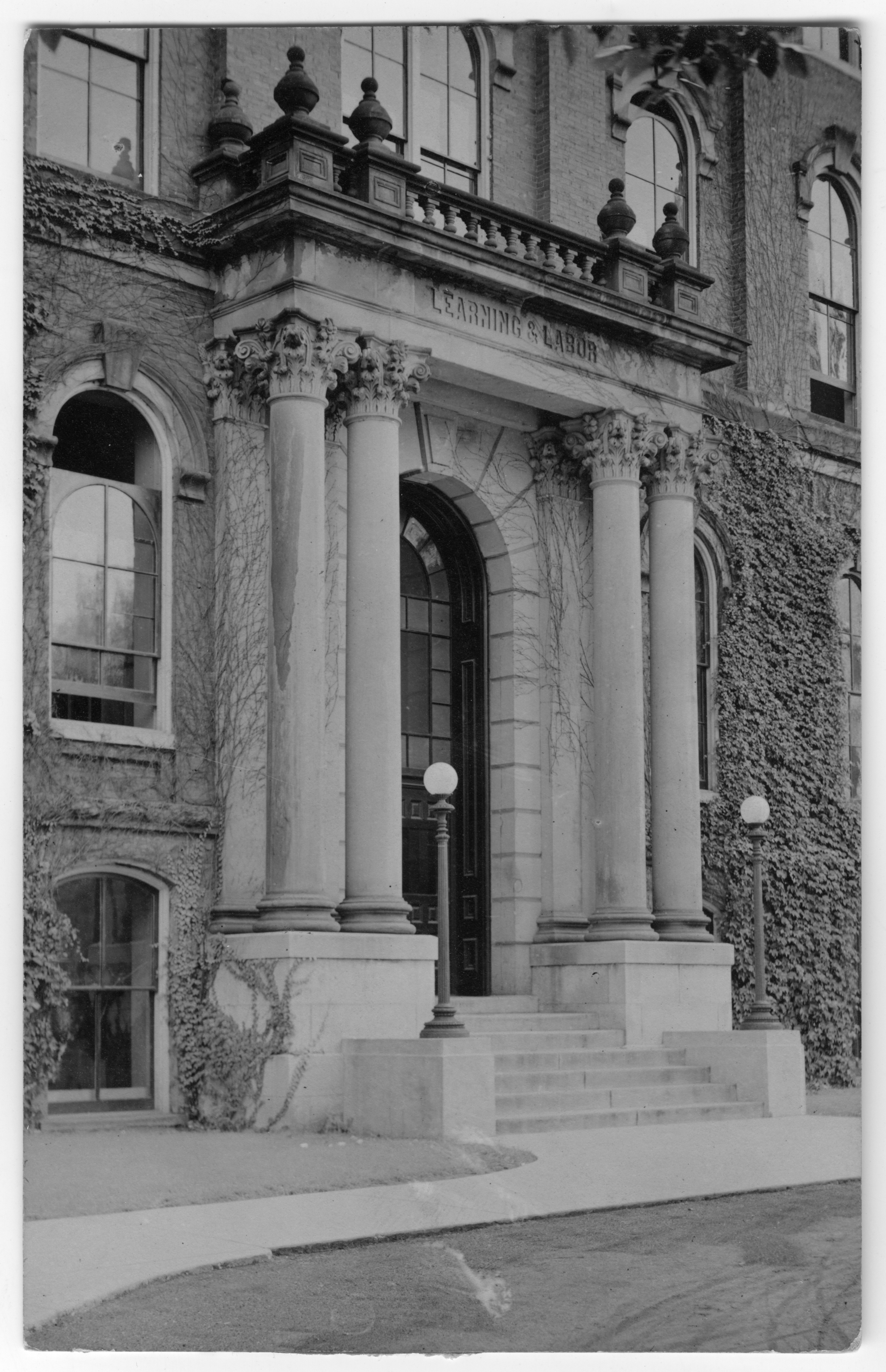 The Entrance to University Hall

Initial funding was to be provided by the State of Illinois, in two installments, but the second installment was never made. First, on the account of the 1871 Chicago fire, the Illinois General Assembly directed most State treasury funds to rebuilding the city. Second, after the Board of Trustees managed to cover the funding, the Illinois General Assembly vetoed the reimbursement at the time of the Panic of 1873. [1]

The New Main Building boasted a capacity to accommodate up to one thousand students at a time. Inside, there was a chapel, a library, a museum and art gallery, a physical laboratory, the Regent’s office, and there were classrooms, drawing rooms, lecture rooms, and quarters for multiple literary societies. 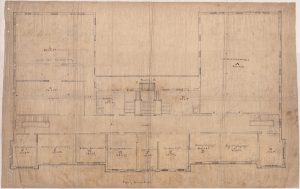 This was the second home to the University Library, prior to its later home in Altgeld Hall. In a 1938 Illinois Alumni News issue, Dr. S.C. Stanton (Class of 1879) remembered:

In the summer of 1874 the library of the University, then numbering all of 9,000 volumes, had to be moved from the Old Building on University Avenue to the New Building, now known as University Hall. At a wage of 10c an hour I was selected to transport the library, in a wheelbarrow, over the two-board walk with an interval between, over the bridge spanning the Boneyard, and up the hill to the west basement door of the New Building, and up three flights of stairs to the new location. This task took up a good deal of the summer, and it was my custom to rest on the southern journey at the bridge and there improve my mind also by reading. The permanent cultural value of the reading, varying for Audubon’s “Birds of America” to Harpers Magazine, is at least problematical but the 10c an hour was a most comforting thought as I toiled and rest. 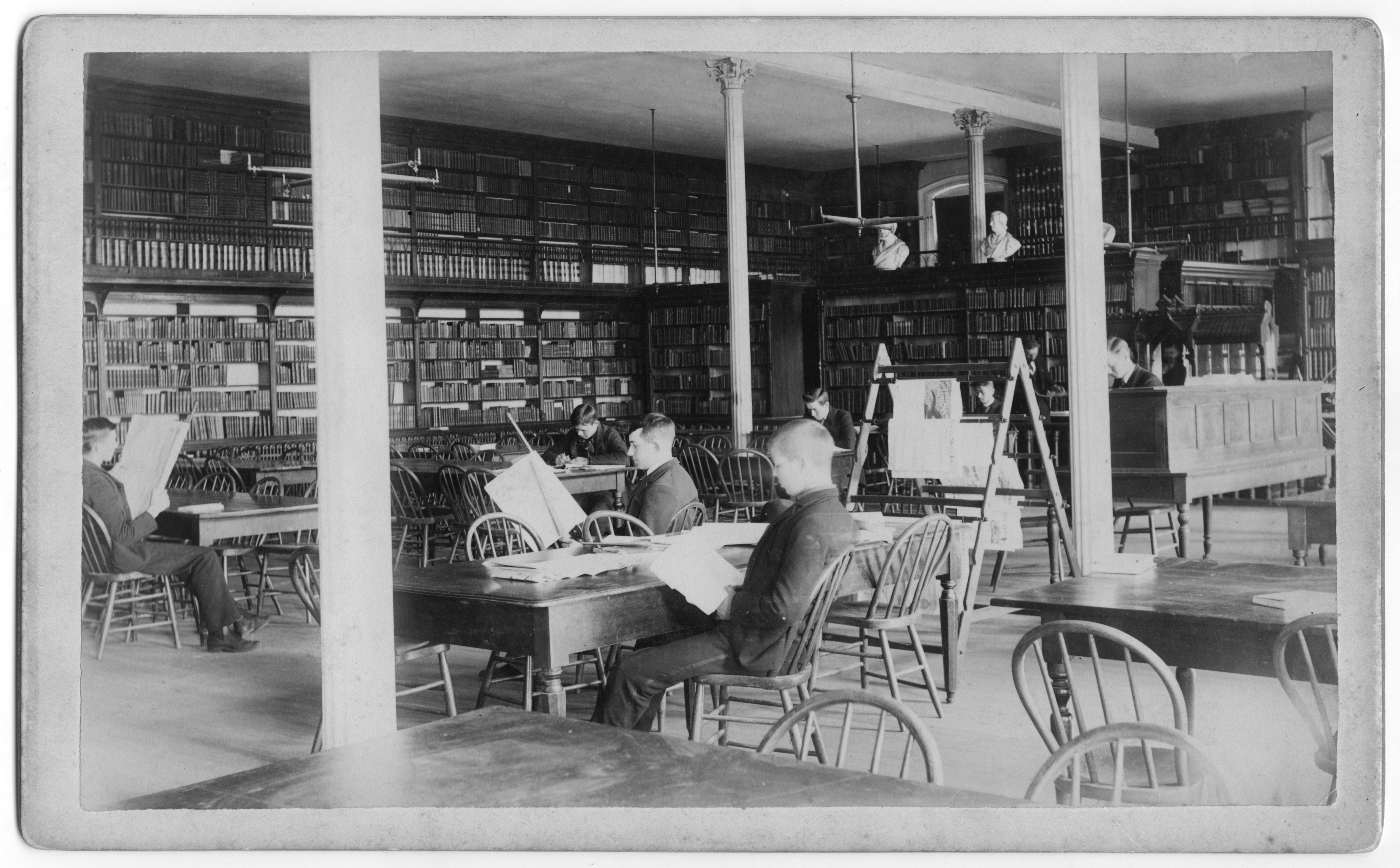 The building stood for over sixty years, hosting thousands of students, but one day it had to come down. At the November 10, 1937 meeting of the Board of Trustees, Board Member Adams of the Committee on Buildings and Grounds concluded that an appropriation of $37,000 was needed to make repairs necessary to maintain the building “for at least fifteen years”. As Adams reported: [2]

Although there is considerable alumni sentiment back of this building, practically all campus plans adopted by previous Boards have contemplated its removal. If funds were available, this would still be highly desirable. However, in view of other building needs, it would probably be at least ten years before this could be accomplished, even under the most optimistic building program recently considered.

Just before 1 pm on Friday, January 21, 1938, the ceiling of class lecture Room 315 collapsed and “hundreds of pounds of plaster, metal lath, and timber fell to the floor” in the unoccupied room. The building was inspected by the Physical Plant Department, and, a Monday, January 24 emergency meeting of the Committee on Buildings and Grounds found that the failure “could not have been foreseen” but the Committee was of the opinion that building was hazardous and it was closed on January 25 except to faculty with offices in University Hall. 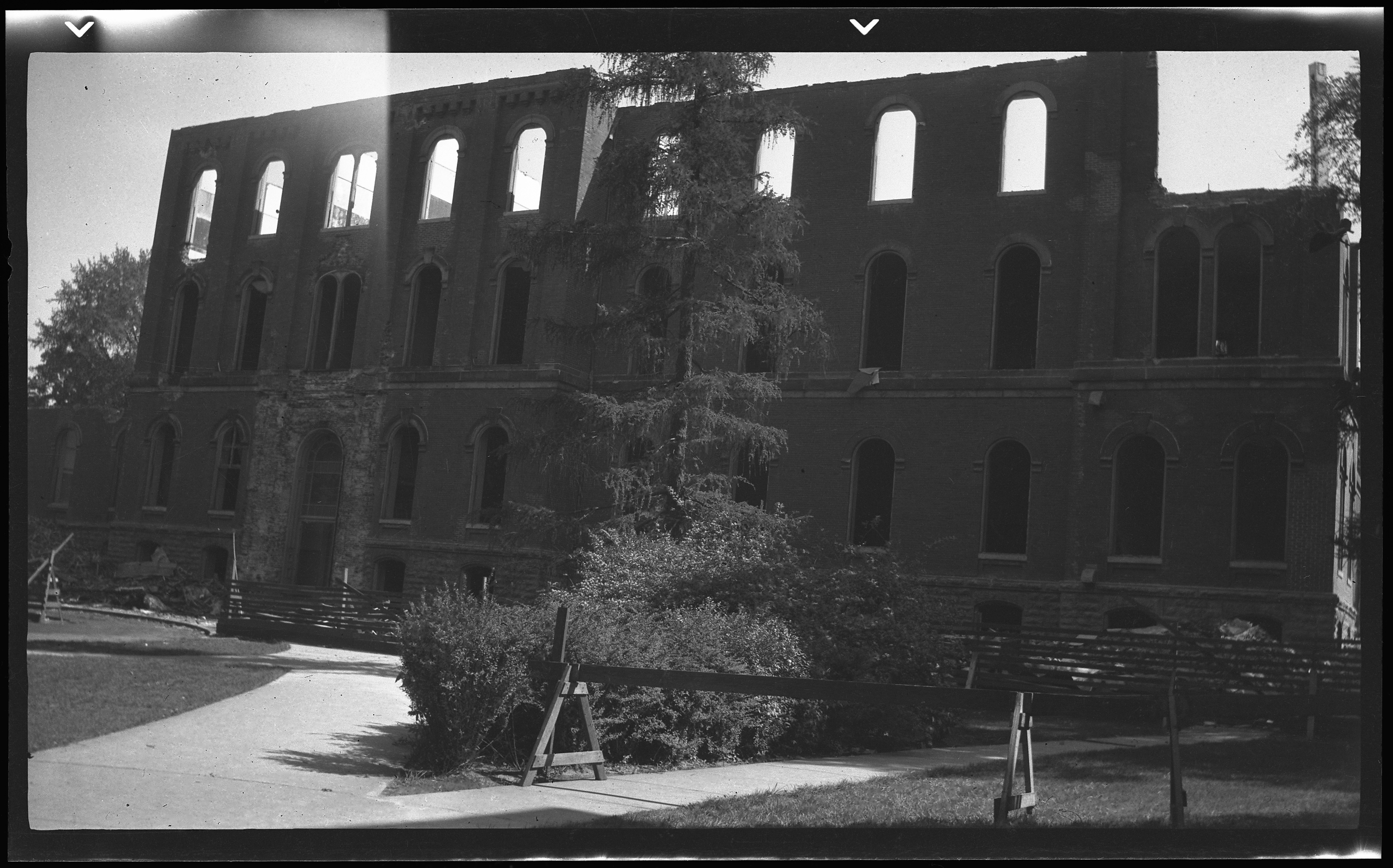 At the February 11 Board of Trustees meeting, after an independent building report was delivered, University trustees determined that the building would be razed. [3]

After recounting a history of the building’s lack of initial state funding that Trustees resolved with selling the University’s endowment of land, Abbott wrote of honest, student mishaps that could have burned-down the building:

Other Adelphics and I, lighting our way with lanterns and candles, crawled through the dust and dry-as-dust attic to install a gas light above ‘David and Jonathan.’ We escaped setting the building afire, but others on similar missions were not so fortunate.

In time the fire department, helped or hindered by thousands of students, developed a happy technique for such events in Uni. Hall, extinguishing its fires of various origins with a maximum of water and a minimum of structural damage.

On being asked by an undergraduate how long the old building would be allowed to stand in the path of progress, I incautiously answered, ‘Until you boys get over your yen for putting out all of those heaven-sent fires.’ That night the old building took fire again, and honest, I had nothing to do with it!

The old building is unsafe for further use and has wisely been abandoned. Years ago the east tower was tied together with rods and beams to avoid a great tragedy such as was narrowly escaped in 1880 when some of the walls of the Old Dormitory fell down in a windstorm. Further repairing and use would be but flying in the face of providence and doing violence to true economies.

The sentiment of a diminishing number of old grads enshrines the old building as ivy covers its walls, but let no such appeal invite a catastrophe by further use of a patched-up wreck that has well served its purpose and has long outlived its useful period. 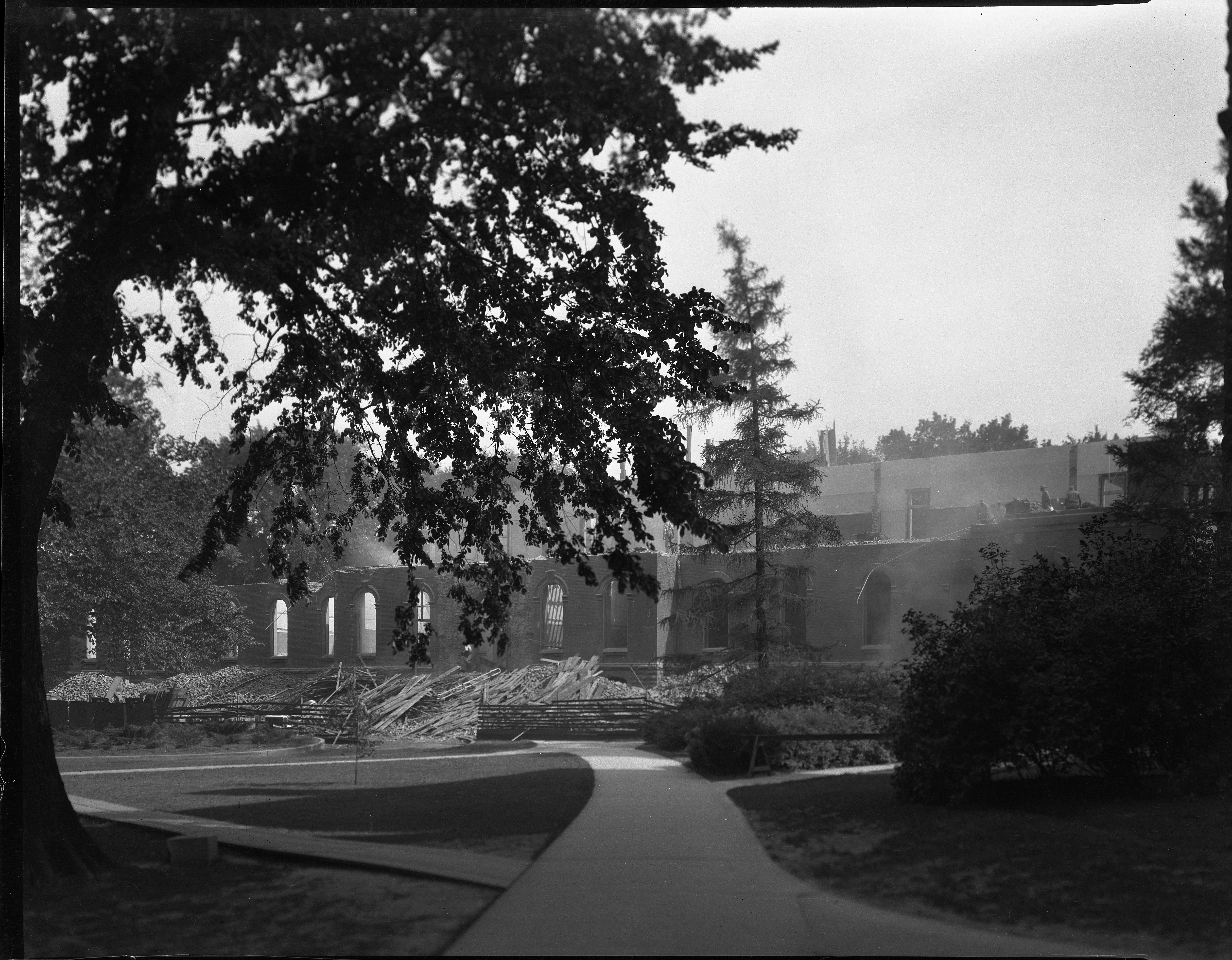