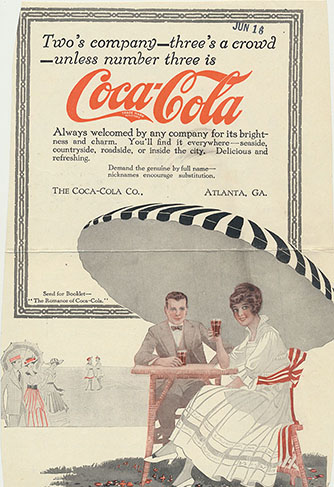 Few would rate the pandemic’s impact on everyday life as a plus, but what came to be known as the Library’s “Woodward Project” ended up not only a win, but a win-win-win.

That is: a win for processing an astounding collection, a win for the Library’s family of workers, and a win for future scholars.

Flash back to 1989, when Chicago businessman Gar y Woodward donated to the University of Illinois Library an eye-popping assortment of  advertisements—approximately 4 million newspaper and magazine clippings spanning an entire century. Covering the time period from the 1880s to the 1980s, the Woodward Collection appears to be the largest of its kind in the United States, if not the world. Comprising an astonishing breadth of topics and products, it chronicles not just the manufacturing prowess of the 20th century, but its moods and social mores as well, touching on far more than the mere hawking of wares.

“I can’t begin to tell you how important this collection is to researchers in advertising, history, gender studies, art, business, and commercial culture,” said Lisa Romero, head of the Communications Library. “These [ads] represent our cultural and consumer history.”

But the breadth of the collection was also its very downfall. Only roughly organized by topic, the advertisements arrived stuffed into old filing cabinets and boxes. Over the years, Romero had completed some preliminary inventorying of the collection’s categories, which represent nearly every product type produced in U.S. consumer history. In 2017, the collection was repackaged into 1,530 cardboard boxes and moved into the Main Library, at which point Jennifer Hain Teper, head of Preservation Services, wrote and received a grant from the National Historical Publications & Records Commission to hire people to dig into the collection in earnest. Painstakingly working through boxes, one advertisement at a time, the crew began weeding out duplications and preparing a record that eventually will form an online finding aid.

But when the pandemic shut down nearly the entire Illinois campus in March 2020, those Library employees and student hires who typically
would work on site ended up stuck at home.

“The Library was committed to keeping people productive . . . but many of them had jobs that just did not translate to work from home,” Teper said.
With a nod from Romero and the University Archives, Teper coordinated an effort to allow personnel to take Woodward Collection boxes out of the
Library and process them at their residences. And, in the first six months, “we moved mountains,” she said.

“So many of the staff were just grateful that the Library found them work to do that meant something,” Teper said. “It was an important project, and
they understood that, and they really valued the work.”

And it was important to Teper as well. Aside from advancing work on the collection, being able to safely meet the workers in person to exchange boxes “was my link to sanity” during the isolation imposed by the pandemic, she said. “I can’t express how valuable it was to me to have that interaction.”

With the gradual reopening of the campus, staff slowly began returning to the Library, and Teper’s crew reduced from 33 at its peak to under 10 at present. Nevertheless, nearly two-thirds of the collection has been processed, with the materials ultimately to be housed in the Oak Street long-term storage facility. Eventually, a comprehensive finding aid will allow researchers to peruse a list of products and brands in the collection and view requested materials within the confines of the Communications Library, which supports the College of Media and its No. 1-ranked advertising department.

“The whole project ended up helping so many people,” Teper said of the massive effort. “It wasn’t just about keeping people busy. It really was about
. . . still feeling connected.”