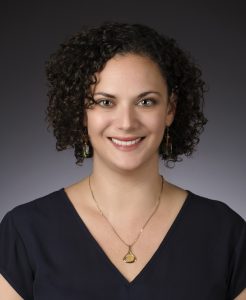 Sara: Welcome to an episode of copyright chat today we have a guest with us remotely—Kyra Folk-Farber. Kyra Folk-Farber is the head of the music library and chair of the library’s copyright advisory committee at the University of California Santa Barbara and she also serves as the chair of the Music Library Associations’ legislation committee. Welcome and thank you for joining us Kyra.

Kyra: Thank you for having me.

Kyra: Yeah, absolutely. So, there are 3 parts to the Music Modernization Act and it’s a really exciting amendment. It’s the biggest change to copyright law in decades and what it—it means different things for different people, so… and it’s the idea of the law, is that it’s sort of supposed to help a lot of different communities including musicians and including the public—public interest and including music industry folks as well so… And the way that it does that is that the first part of the act we have—it’s about licensing. And the 2nd part is the part that I really want to talk about today and that’s the Classics Protection and Access. And what that does is federalizes copyright law for pre-1972 sound recordings and gives them a public domain term. So, it used to be that pre-1972 sound recordings were under state laws, and those varied a lot, and it was a really difficult thing to figure out whether—you know—whether uses were legal. But now that they’re—those materials are federalized it means that they have federal exemptions. So, they, you can, you know apply fair use to them, you can use them in the classroom under certain conditions and libraries and archives can reproduce them under certain conditions. So that’s really, really exciting, because that that’s really good for the public, that means the public can have a lot better access to pre-1972 sound recordings and the public domain term means that at some point in the future, all of these pre-1972 sound recordings are going to go into the public domain. And that wasn’t the case before. So those are two really exciting pieces of the law for the public.

Sara: So, under the law before, the state copyright laws were pretty much interminable? For those sound recordings? And so now we at least have an and date. Although, the end date is pretty far off isn’t it?

Sara: And there’s a fairly good explanation of this these changes on the Copyright Office’s website, right?

Kyra: Yeah, absolutely. You don’t have to dig through the law to understand all of this, because there’s actually a really nice rundown of the whole Music Modernization Acton Copyright.gov

Sara: Awesome. So, what does this mean for libraries in particular and music usage through, say academic libraries?

Kyra: So, you know, it’s a really good thing, especially for scholarship, because, you know, sound recordings are such an important part of our culture, and so when you have people that are able to study sound recordings just as they study other materials, just as you can use the books in a library, then, you know, it makes it easier for people to do the scholarship that’s so important, right? And the other thing is that people, you know, people love to listen to old recordings, so this isn’t just for scholars, this is for people to come and use these old recordings and you know, use them for their own interest just as they would use the library. You know and so, I don’t know if you know people know the ins-and-outs of what’s legal and what’s not before the Music Modernization Act, right? But there’s always this sort of psychological aspect, I think to—you know—if there’s something that you’re not sure whether it’s legal or not (which was a lot of times the case with pre-1972 sound recordings, because of state laws being so confusing), you know, people avoid use using things. And now we can we can firmly say, well, you know what, this is OK. One of the one of the big kind of changes is a part of the law called “108H” and what that means is that—it means that all pre-1972 sound recordings. Can go under Section 108. So it used to be that under Section 108H, which allows reproduction, distribution, performance, and display by libraries and archives of their materials that were ins certain…like in the last number of years of their copyright term, those could be used for preservation or scholars for research. Now that applies to all pre-1972 sound recordings. So that’s a really important part of the law and that I think will be a boon for scholarship.

Sara: So, all work that’s now swept into this federal copyright law for sound recordings pre-1972, if a library is using it for scholarship or research and things of that sort, then they don’t have to worry about the copyright issues.

Sara: That’s great, because that’s a big relief for copyright. Nerds, such as myself who worry about—especially like you were saying before, under different state laws, it was very confusing, because you know, Texas might say one thing, and New York might say another thing and now at least we know what the answer is because there’s one law to look at.

Sara: So this is a relatively new law. I wonder if you’ve seen any of the impact of the law so far, and kind of what you think might be the impact in the future.

Kyra: Well, again, I think like there have…. There’s been a lot of confusion around pre-1972 sound recordings and there’s been a lot of advocacy to make this happen over decades and decades from different associations, and it’s sort of been under the radar, I think. And it’s still a little bit under the radar, that’s why I’m so glad that you’re, you know talking about this for this podcast, because I think it’s important that people know what’s going on. And so I hope that, like, this will kind of get out there, and so that people know, well now, you know, if I want to do scholarship on pre-1972 sound recordings I have a lot more opportunities to do that without worrying too much, because of these new laws. And, you know, and it’s also, we’ll see kind of what happens in terms of language around some of the other parts of the law so…. and also 108H, because we have to figure out—you know—the Copyright Office has put out, you know, questions to the public, for public comment on how they’re going to implement the law, and different organizations have been working on making suggestions, and those organizations are on sort of different sides of the law, really. So, you know, we have people on the side that want public interest, and we have the music industry side. And again, this law is for everybody, and they want to make everybody happy. And so they’re sort of figuring out how, for example, if you’re using a recording for a certain use, for example, for scholarship, not for you know commercial exploitation—how are you going to prove to the copyright office that you’ve used it in the right way right and how are you going to prove that you’ve done a search to make sure that that you’re not using a recording that’s available for commercial use (because that’s another thing that they have changed). So, there are still a lot of ins-and-outs that have to be figured out and will probably take a few years, and there may be also some more advocacy for shorter public domain terms in the future.

Sara: Right, yeah. So, there’s a lot. There’s a lot going on, it sounds like. And there’s a lot to follow. And I’ve been kind of following myself, those guidelines that were put out by the U.S. Copyright Office, like you said, so that an individual, who wishes to use a song could kind of show that they’ve done a good faith search, that they can’t locate someone to ask permission to use a song for instance. And I think that’s a really interesting concept, just “Where do you look?” Right? One of the places I think they said to look was YouTube and some folks found that kind of surprising, because YouTube doesn’t usually do copyright checks, right?

Kyra: Well, you know, it’s interesting YouTube…They’re like very litigious, actually, and they just take down everything. So I know that—I know of people like musician friends who put up their own albums on YouTube, because there were going to make any money off of it anyway, and so it’s on to put it out there and YouTube, said “No, you can’t, because it’s under copyright.”

Sara: I guess I misstated that. They do do copyright checks in the sense of like, trying to take things down, but they don’t necessarily have a registry of copyright owners, which is what people, you would think, would be looking for when trying to figure out who owns the song.

Kyra: Right and that’s the—and that’s another part of this—of the Music Modernization Act that. That’s the 1st part of it, the licensing part. So now there’s going to be, you know, I won’t go into this into too much detail on this one, because it’s a bit like…wordy, but basically, digital service providers are going to fund a mechanical licensing collective, and  that will be governed by songwr—and published by independent songwriters. And a mechanical licensing collective is going to get—it’s going to create a blank mechanically—or create blanket mechanical licenses for the digital service providers. And so, they’re going to basically create a huge database and that will connect songwriters` or publishers with songs, and also if there are unclaimed songs, that will allow people to claim them. So that’s the part, that’s really good for musicians and for the music industry where you, know there’s been this battle with the digital service providers, and so now this will allow, for example, maybe an independent songwriter can claim royalties on their songs.

Sara: Awesome. Well, I think this has been really useful, and to kind of understand where this Music Modernization came from and where it’s going and how it’s helpful for librarians. I just thank you for kind of giving us a little glimpse into it and I know you did a Copy Talk on a similar topic with the American Library Association, so I encourage people who are listening here to look for that as well, and I will put a link up with this episode so that folks can find that as well.

Kyra: I might slide you all some resources if people want to do some further reading on this.

Sara: Oh yeah, great! Well thank you so much for taking the time to talk to me today and I hope that folks have learned something about this new Music Modernization Act, which of course is still developing, and check (if you really want to learn more) the Copyright Office is a really good, accurate source of information as well about the Music Modernization Act. Thanks a lot for talking to me today.

Kyra: Thank you so much Sara.

Links for items of interest from the episode: