Congratulations to our 2019 winners! See their entries below, or all 2019 competition entries here. 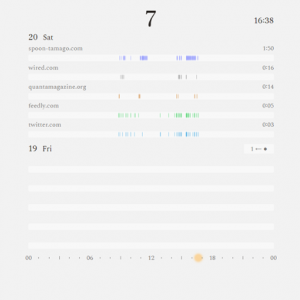 “With the recent discussions surrounding misinformation and personal privacy, there has been escalating concern over the effects of the internet and the attention economy. In response, Apple introduced Screen Time with iOS 12 and Google released Digital Wellbeing for Android. Both help users visualize and self-impose limits on how much time they spend on their mobile devices. These aids, however, are often tucked away behind menus, reducing their accessibility. They also focus primarily on total time spent, making it difficult to see apps we are constantly distracted by but spend little time on. In addition, fixed time limits are very rigid compared to our more fluid behavior. To accommodate for this, time limit mechanisms often include easy bypasses which obviate their purpose.

Hibiol visualizes your browsing history in your browser’s new tab page. A timeline displays information for today and a day within the past week. For both days, the 3 websites you spend the most time on and the 2 websites you visit most frequently are shown.

Instead of using onerous interventions, Hibiol uses high data visibility to create a consistent cognitive dissonance-based feedback loop. This lets us frequently adjust our expectations and actions to be consistent with one another. 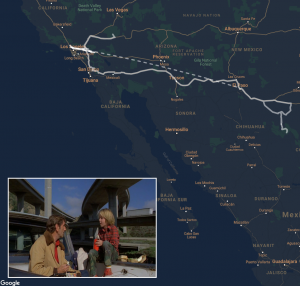 
“I have always been fascinated by films and where they take place with the eagerness to pinpoints these places on Google maps and visit during travels. Thus here comes Cinepath, a visualized interface for cinematic film locations. This is a personal voyage of cinema in terms of interdisciplinary studies with cinema and data visualization. The dataset was self-collected with available sources online such as IMDb yet its limitation was minimized by analyzing the film frame by frame and using street views. Then with these coordinates, I use webpages as the medium, Google Maps as the canvas, and Google Maps API as a drawing tool to create the animated paths that show where the director chooses to shoot the film. Right now it is still a prototype since two films have been visualized: Paris, Texas (1984) by Wim Wender and Frances Ha (2013) by Noah Baumbach. In the future, the plan for this project is to increase the number of films to better analyze director patterns throughout their careers.” 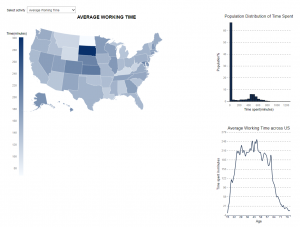 “A Day in an American’s Life” by Pranay Parmar

(Acknowledgements)
I wish to thank various people for their valuable contribution to this project:
Sarvani Putta, Beena Balakrishna, Smriiti Singhal” 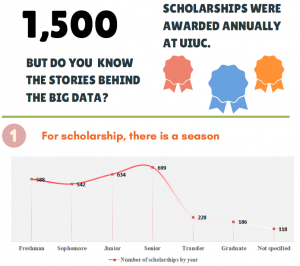 “3 things you need to know about scholarships” by Yihan Zhou


“Scholarships play a important role in student’s university life.
It not only provides financial support, but also adds an honor to a student’s resume. UIUC provides a scholarship database where you can search by colleges and alphabets. Despite the existence of the searchable database, the information of scholarships has to been searched one by one. It will be difficult to capture the big pictures, which may help in navigate students through the large amount of opportunities