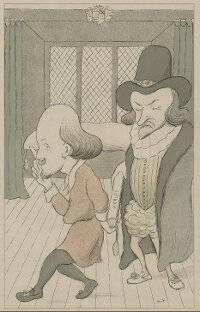 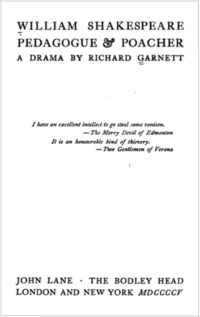 A schoolteacher in Stratford, Shakespeare longs for London life and the stage. When he rather brusquely tells his wife that he is deserting her and the children, she turns him in to the local lord as a thief. An arrogant and clever Shakespeare provokes Lord Lucy, who suspects him of dalliance with his wife, into sentencing him to be flogged and then exiled for three years. But a deus ex machina in the form of the Earl of Leicester arrives in time to extricate Shakespeare’s genius from petty Stratford. —VH 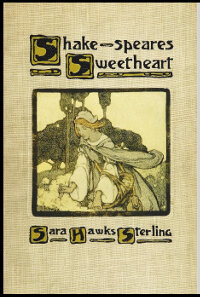 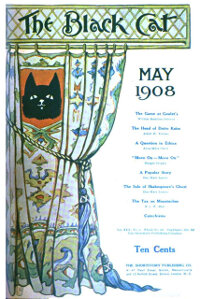 Millionaire and aspiring writer Robert Varel answers a small newspaper advertisement offering to lease the ghost of Shakespeare for $10,000 a week. After a demonstration, however, he is not satisfied to rent the miraculous fountain pen that scribbles lines from The Merchant of Venice as well as original lines when he puts the nib to the pages of the special portfolio. He must own the ghost—and he buys it for $1,000,000. He writes a pretty good five-act play entitled “Prince Edward,” before he realizes he’s been duped in this short story of a fool and his money. -VH
Read the full text 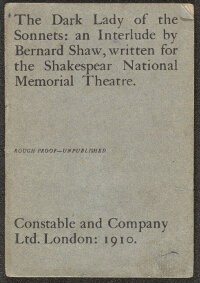 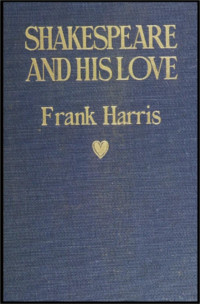 Written, Harris says, in 1904, this play covers the same ground as Shaw’s “The Dark Lady,” though less successfully. Harris was incensed when Shaw’s play appeared in 1910, and rushed this one into print claiming in the preface: “I have not yet read or seen Mr. Shaw’s play: I only wish here to draw attention to the fact that he has already annexed a good deal of my work and put it forth as his own, […] I naturally infer that in this play he has taken from me even more than he could hope to pass off as his own.” In the play, Shakespeare desperately admires the Dark Lady, Mary Fitton (1578-1647), and asks William Herbert, Earl of Pembroke (1580-1630) to play Cyrano for him. Fritton falls for Herbert (an historic fact), and the emotional turmoil inspires Shakespeare’s most productive writing before he retires to a melancholy life in Stratford. —VH

Read more about the play
Read the full text 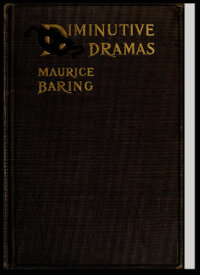 This play depicts a 1595 rehearsal of Macbeth, using a light comic touch to theorize about the art of playmaking and the role of collaborative input in theater work. Shakespeare himself is the much put-upon AUTHOR, asked to rewrite, cut, and give them something they can ham up. As the AUTHOR, the PRODUCER and the STAGE MANAGER farcically attempt to rehearse Act V of Macbeth, Mr Hughes, playing Lady Macbeth, falls over and argues about his lines; Burbage then enters as Macbeth and asks the AUTHOR for a soliloquy to make his character seem more sympathetic. While Burbage and Macduff practice the fight, Shakespeare writes the ‘Tomorrow and tomorrow and tomorrow’ speech, which Burbage then refuses to speak because “It’s a third too short. There’s not a single rhyme in it. It’s got nothing to do with the situation.” –SJJ

1900's Akenside - Burgess Upon the Boards 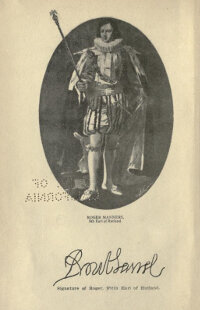 “A chronologically arranged outline of the life of Roger Manners, Fifth Earl of Rutland and author of the works issued in folio in 1623 under the nom de plume Shake-Speare” followed by two plays. The first play has the Earl setting up a certain William Shaxper as his “dummy and strawman,” while the second deals with the making of the First Folio nine years after Earl Rutland’s death. When the Earl of Pembroke wants to publish Rutland’s works in folio, Ben Jonson, Martin Droeshout, Heminge and Condell all agree to work on the project, and a few of them even remember the real Shaxper who could not even sign his own name. 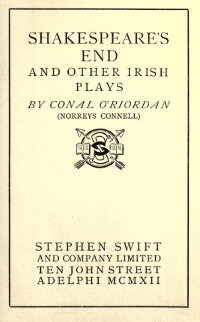 Hiding behind the name Norreys Connell, the Irish playwright Conal O’Riordan uses Shakespeare as a mouthpiece for his political views about the role of art in society, touching upon Anglo-Irish relations and the duty of playwrights to speak truth to power. He draws upon the story, told by John Ward, (1629–1681) that Shakespeare died after a night of drinking with Ben Jonson and Michael Drayton. O’Riordan introduces two visitors to this party, an English sailor and a Jesuit priest. The sailor causes Shakespeare to doubt the harsh imperialism of his beloved England, while the priest inspires an epiphany as Shakespeare questions the value of his art, and then seems to expire as a Catholic. Shakespeare’s wife also makes an appearance, as does his daughter Judith, who presents the prologue and promises a play in “barbarous blank verse and jingling rhyme.” —VH 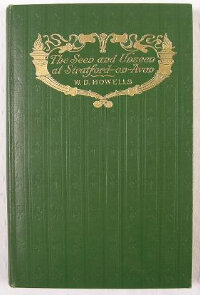 The scarcity of the information on Shakespeare’s life offers a license for fictional authors to reconstruct his personality. This ‘Fantasy’ takes the form of a travelogue in which an American tourist is following the Shakespeare trail, attending the Shakespeare Festival in Stratford-upon-Avon. On his travels, the narrator happens to ‘wonder at the cinematic apparition’ of William Shakespeare. Luckily Shakespeare’s phantom is a friendly and genial fellow who insists on taking the narrator on a personal tour of his birthplace. This romanticized narrative covers all disputed aspects of Shakespeare’s life. The narrator can directly converse with Shakespeare on issues such as his relationship with his wife and the authorship debate. It also includes a very appealing characterization of Francis Bacon, as the narrator gets to meet with the ghost of Bacon, an extremely unsavory and grumpy man. –VL