O put me in thy books!

400 Years of Shakespeare in Fiction

William Shakespeare, who created such memorable characters for the stage, has often appeared in fiction as a character himself. Even before his death on 23 April 1616, he made a thinly-veiled entrance in a diatribe by Robert Greene as “an upstart crow,” prone to plagiarism, “who thinks himself the only Shake-scene in the country.” From that inauspicious start, Shakespeare’s fictional character generally improves. In hundreds of works of fiction, he appears variously as boy, lover, family man, courtier, bumpkin, genius, friend, actor, hero, and, less commonly, villain. Whether in poetry, plays, novels, young adult literature, or movies and television, this one man plays many parts.

This site commemorates the 400th anniversary of Shakespeare’s death by celebrating his life—or rather lives, as he survives in our imaginations. It is the collaborative effort of four institutions, two from England:

And two from America:

A small group of librarians and professors have selected and annotated this interactive list of about 100 works of fiction from 1623 to 2016. We have chosen works by great authors such as John Dryden, John Milton, Mark Twain, Isaac Asimov, and Jorge Luis Borges, as well as comic books, sentimental novels, polemical plays, and young adult literature. To qualify for inclusion, the work had to be interesting, curious, or otherwise noteworthy to our minds. It is an eclectic group of works, and Shakespeare appears in many guises.

As we put together the book list, we began to notice certain patterns. Some historical fiction packs in as many biographical details and well-known anecdotes as possible. Other works focus on some particular aspect of Shakespeare’s life, and in these we often found common threads across starkly different interpretations. His Stratford childhood, his relation with Anne Hathaway, London theatre life, the Dark Lady, rival playwrights— these are common themes. Some authors go farther afield, creating time-travelling Shakespeares or inventing scenarios such as Shakespeare the spy, Shakespeare in Virginia, or even Shakespeare the alien to suit their fictional portrayals. We have organized the site by eight distinct character “types,” grouped under subtitles ranging from “Shakespeare in Love” to “Breaking Bard.” Visitors may also search or view the list by author or chronologically.

We know that Shakespeare appears in far more than one hundred works of fiction. Indeed, we have discovered more than 500 appearances thus far. There may very well be others not yet dreamt of in our philosophies. Let us know! To involve as many Shakespeare lovers as possible, we have created a space for visitors to add their favorites to the list.

Where do I go from here?

As Shakespeare’s friends, the editors of the First Folio, said in 1623: “we hope … you will find enough, both to draw, and hold you.” We also hope that the fictional Shakespeare will lead you back to the authentic one, “for his wit can no more lie hid, then it could be lost. Reade him, therefore; and again, and again.”

We few, we happy few, we band of brothers–and sisters

Some images on this site are subject to copyright, but are shown here under Fair Use guidelines enabling the use of copyrighted material for non-profit educational purposes. 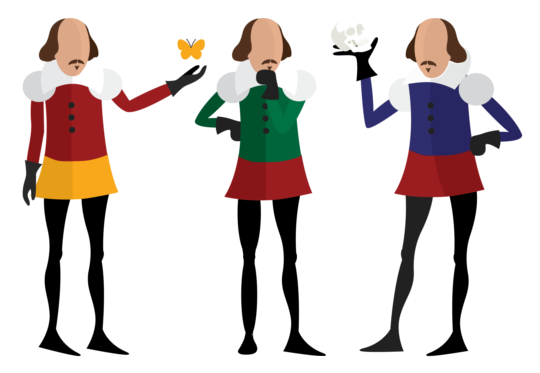