The Map Library offers an extensive collection of topographic maps covering much of the world. The collection includes publications from the USGS as well as those published by foreign agencies. Topographic maps are used widely for applications such as hiking and camping, engineering, land conservation, etc. The feature that distinguishes a topographic map from any other type of map is contour lines that show lines of equal elevation. This method proves to be a highly effective way of portraying three-dimensional land forms on a two-dimensional piece of paper.
Understanding Map Scales
Mapping Definitions
How Map Areas Are Defined
Determining What Map Sheet You Need
For more excellent introductory information on topographic maps visit the sites for the USGS Topographic Maps or Natural Resources Canada.

Understanding the concept of scale is useful when dealing with maps. Scale is the ratio of the distance on the map to the actual distance on the Earth’s surface. A map of scale 1:24,000 means that one inch on the map is equivalent to 24,000 inches on the ground.

Take a look at the difference in detail you can see of the Fermi National Accelerator Laboratory (Batavia, Illinois) in the following maps with various scales. The ring is approximately 1.25 miles in diameter. 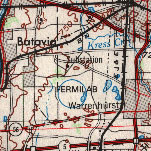 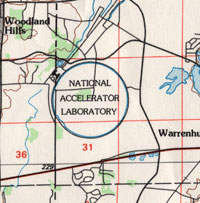 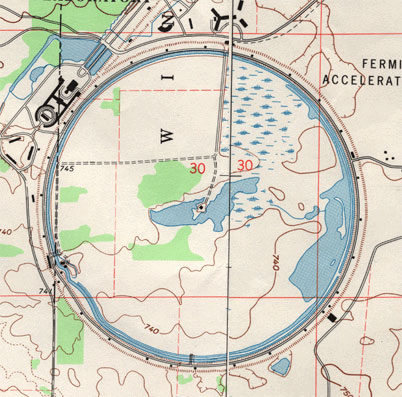 (Please note that this image was constructed
by combining images from two topographic
quadrangles.)

Contour Lines Isolines that show equal elevation on a map at defined intervals.

Declination A measurement of the degree to which a grid or magnetic north varies from true north. Declination is usually measured in mils, where one mil is equal to 1/6,400 of 360 degrees.

Graticules* A network of lines on a map that represent the meridians of longitude and parallels of latitude.

Grid North** North according to the grid imposed on the map. Because grids ignore the curvature of the Earth, this is not the same as true north.

Grid* A network of uniformly spaced lines on the face of a map, intersecting at right angles and usually running north-south and east-west. Grids are often numbered and can be used to define position by rectangular coordinates.

Index Map A map that accompanies a map set that shows the overall arrangement of maps in the set and shows their numbering scheme and areas of coverage. It is useful for finding the particular map needed without having to browse through the entire mapset. Think of an index map like a visual book index. The index map shows you the contents of a mapset so you can choose the specific page (or sheet) you need.

Magnetic North** North according to the Earth’s magnetic poles rather than its geographic poles. Declination from true north is given in mils where one mil equals 1/6,400 of 360 degrees.

Meridian A starting point/line, usually a line of longitude, for a numbering system to section the earth into a grid.

Projection A way of depicting the three-dimensional surface of the Earth onto a two-dimensional sheet of map paper. There are many types of projections all of which aim to have the least amount of distortion on as many properties of the map as possible, such as distance, angular measurement, area, or shape.

True North** Geographic north. What most people think of when they hear the word north.

How Map Areas Are Defined

Topographic maps are published in sets that cover a large named geographic area. Each individual map within a set contains a unique identifier that may be comprised of numbers, letters, number sand letters, or a name that has significance in the area covered. The identifiers are typically determined according to one or more grid systems used by the map publisher. For instance, for the USGS 7.5 minute topographic quad series, the grid is determined by sectioning the United States into (approximate) rectangles that are 7.5 minutes of latitude by 7.5 minutes of longitude. Each of these “quadrangles” is given an individual name that typically represents the most prominent feature of the area covered.

There are many such grid systems in existence in the mapping world. The U.S. Army Map Service published a set of 1:250,000 maps that use a map designation system where blocks north of the equator start with N and blocks south start with S. A typical block is numbered as follows: NB39-12. The second letter is from A to Z, the letter determined by increasing distance from the equator. The next component of the designation gives information about how far the block is from a meridian. The area NB 39 is then further subdivided into 12 or 16 smaller blocks (depending on latitude) to which the final component of the map designation system refers. This system is still being used today by map publishers around the world, like the Pan American Institute of Geography and History (PAIGH) that published a set of topographic maps of Latin America.

Grid systems can be universal, like the Universal Transverse Mercator (UTM) Grid, they can be national, such as the Great Britain National Grid System, or they could be determined on a map-by-map basis.

Determining What Map Sheet You Need

Once you narrow your geographic search to a specific map set that has the type of information you need, it is necessary to find a particular map within the series. This can be accomplished through the use of an index map for the map set. The index map shows all of the individual maps within a set, overlaid onto the larger geographical area that the set covers. It is usually necessary to consult the index map in order to find the sheet number of the individual map you require. In the example below, you would request sheet #6 to see the map covering Cherbourg, France.

Example index map for a 1:100,000 series of maps of France.
The Map Library holds the index maps for most of its series in a file cabinet near the circulation desk in call number order. Please ask at the desk for assistance in locating and retrieving an individual map from a map series.
Map sets that are physically housed within the Map Library usually can be accessed and individual sheets retrieved from immediately. Map sets housed at the Oak Street Library Facility will need to be requested through the online catalog for delivery to and in-library use at the Map Library.Retrieval from Oak Street may take up to two business days.
Loading Library Hours...