There are many general sources for the various genres of the arts that can be used successfully by researchers of Russia and Eastern Europe. These resources range from large, scholarly encyclopedias and specialized bibliographies to on-line databases and web sites. Many people wrongly assume that unless a work has Russia or Eastern Europe in its title, it will not contain information about the people, movements, trends, etc. from this part of the world. The sources we chose to include are divided here into several broad categories of the arts: music and opera, ballet, film, theater and other performance arts and art. Keep in mind that there are many general sources available, but we list here only a few that we have found useful.

To begin an exploration of the world of general reference materials for the arts, many of which may include topics related to Russia or Eastern Europe, consult the appropriate sections of Balay, Guide to Reference Books. This guide gives clear descriptions of the contents of the works. Examples of a few pertinent resources covered by this guide are the New Grove dictionary of opera, Music index: the key to current music periodical literature, and Bibliography of national filmographies. As general works published in the West these sources will not be covered in our guide to Slavic and East European arts, but they may contain information that is quite relevant to research in this field.

Other very pertinent general sources of information are the various on-line databases or indexes to periodicals in the field of the arts. Many of these sources are available by subscription only, so different ones will be found at different libraries. Two listings and descriptions of some of these tools are on the websites of the Yale Arts Library and the Duke University Music Library. Although you will not be able to access some of these databases because of the subscription issue, they are included here to provide an idea of the kinds and scope of on-line sources that exist. For the pertinent subscription databases available at the University of Illinois Library see the Arts and Humanities section at the Online Research Resources. Keep in mind that if you are not affiliated with the University of Illinois, you will not be able to access these databases through this website. 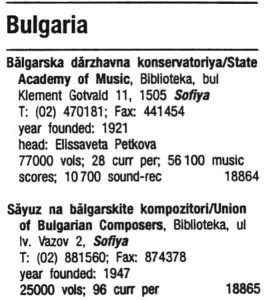 Munchen: K.G. Saur, 1999-.
U of I Library Call Number: Music Reference ML21.E9 E971 v.1-2 + Main Reference Q.780.254 Eu74.
A significant reference directory, this source provides “extensive documentation of the entire European music industry” according to its preface. All of the countries of Eastern Europe, the Baltics and Russia are included. Even Bosnia and Hercegovina has entries. This source is a directory of institutions related to music providing in its brief entries addresses, phone numbers, names of the directors, founding dates and other details. Volume one contains entries for the following topics: orchestras, competitions and prizes, festivals, agencies, radio and television, associations and foundations, teaching and instruction, documentation and research. Music libraries and archives can be found in volume 1 under documentation and research. Volume two contains indexes for persons, instruments and institutions and firms as well as the following topics: music industry, trade, studios and record companies, music publishers. See two entries to the right for music libraries and archives in Bulgaria.

Handbook of Soviet and East European films and filmmakers.

Slater has produced good introductory material on the film industries of the Soviet Union and Eastern Europe and its major figures. This source combines several reference elements into one volume with the following items present for each country: general essay on the film industry and an accompanying bibliography, brief biographical entries for the major film figures, and a selected filmography. In addition to the country specific materials there is also a chronology of major historical, cultural and film events from 1890-1990 in the Soviet Union and Eastern Europe. There are subject and film indexes. The biographical entries would be greatly enhanced if they contained bibliographic references. See the entry below from the biographical section of Czechoslovakia which details the career of novelist and director Vladislav Vancura. 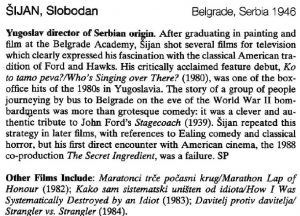 The BFI companion to Eastern European and Russian cinema.

This recent reference book has entries for national cinema, major institutions, and figures related to the film industry in Russia and Eastern Europe. All entries were written by film experts and are signed. Although they admit in the preface that they made no attempt at comprehensiveness, the major movements and individuals are included. Some entries have bibliographic references, but it is a major shortcoming of the book that there are so few. A brief bibliography of Russian and East European film sources is provided as well, but it emphasizes English-language sources. See the entry to the left on Yugoslav director, Slobodan Sijan.

Soviet/East European Cinema: A Bibliography of Materials in the UC Berkeley Library.

This is the website of the Media Resources Center at the University of California-Berkeley Library. It is interesting to beginning researchers of Eastern European film history for several reasons. First, it has annotated descriptions of the Russian and East European films in its non-print collection with informational links for most movies to the Internet Movie Database. Second, it has a similar list or “videography” for documentaries about Eastern Europe which incorporates citations for reviews of those documentaries. Third, it has a number of bibliographies of books and journal articles about national cinemas including Russian and East European. Keep in mind that the lists and bibliographies include only items that Berkeley holds in their collection and only items in English, but it can be a good place to start for those who know little about the topic.