Unfortunately, a bibliographic guide for this kind of material has not been published yet. Therefore, we have chosen only a few books that, in the opinion of this compiler, probably best represent the issue overall – historically, geographically and chronologically.

In his foreword to Glad’s book, Victor Terras writes that it is an historical survey “of a category of literature that is defined by extra-literary circumstances.” Thus, this work, which begins with the East-Slav siege of Byzantium in 906 A.D. and ends with the breakup of the Soviet Union in 1991, lays particular emphasis on historical and political details as it narrates the development of Russian life and literature abroad. The text itself is enhanced by a chronology of events that is more than 100 pages long and an index of personal names. Unfortunately, the long list of secondary sources is arranged alphabetically rather than by subject which would have been more advantageous to the user.

The essence of this book is explained best by the author in the Introduction to the first volume. He states that the purposes of his work is to :1. Preserve for future generations a “History of the Russia Abroad and its cultural and educational activities”; 2. Express appreciation for those non-Russians who during more than half of the century helped the preservation and development of Russia abroad; 3. Provide future historians with information about what was written and published about Russia Abroad and where materials of this kind could be found. The importance of this work lies in its attempt to depict various aspects of cultural and social life of Russian emigrants all over the world during the period of 1920-1970. The bibliographic list at the end of the first volume includes works (monographs and articles ) written by about 50 individuals, including writers, artists, scientist, and political figures and others about the subject. A bio-bibliography of the most famous Russian emigrants is also included. The second volume – Dopolnitel’nyi Vypusk) has some additional and updated information on Russia Abroad and an Index of names.

Working with archival materials is a dream of almost every researcher and often a necessary step in executing a research project, since they provide original source materials and unpublished documents. That is why it is so essential to have good guides of the archival depositories with detailed descriptions of their contents. Archival depositories of “Russia abroad”, of its people, organizations, publishing, political, and other activities are enormous. Unfortunately, information about many archival collections is scarce. Sometimes, the ongoing process of new archival acquisitions makes the existing compilations of the depository guides outdated. The listing of several archival resources below and some suggestions on how to proceed with the independent search is our modest contribution to the field.

Archival depositories in the United States

The Russian Empire and Soviet Union: a guide to manuscripts and archival materials in the United States.

In the course of compiling this guide, the editors and researchers contacted more than 7,500 institutions and individuals in the continental United States, Hawaii, and Alaska. Hundreds of collections that had heretofore escaped scholarly attention were brought to light. All research for entries was completed by the spring of 1979. For the most part, the emphasis throughout was on the homeland of all nationalities within the territory of the Soviet Union in the time of compilation. However, some documents pertaining to émigré life have been included. Entries are in alphabetical order by state, by city, and thereunder by repository, institution, or individual. Within each entry collections are again in alphabetical order. A personal name/subject index provides easy access to the records.

Russia in the twentieth century: the catalog of the Bakhmeteff Archive of Russian and East European History and Culture.

The archive’s holdings have four main focal areas, each consisting of materials of both personal and institutional origin. The first area is made up of materials from, or pertaining to, prominent literary figures of the Russian emigration. The second area in the collection consists of archives of institutions or organizations. Most of them are émigré benevolent and professional organizations, mainly in France. The third area is concentrated on documents of the major historical events that were at the origin of the Russian emigration, that is, the last phase of imperial Russia, the revolution, and the civil war. The documents in this area have been extended chronologically with the acquisition of materials pertaining to or originated by the so-called displaced persons after World War II. The fourth area of the archive’s strength is constituted by materials pertaining to Eastern Europe.
The copy of the user’s guide is pictured below. 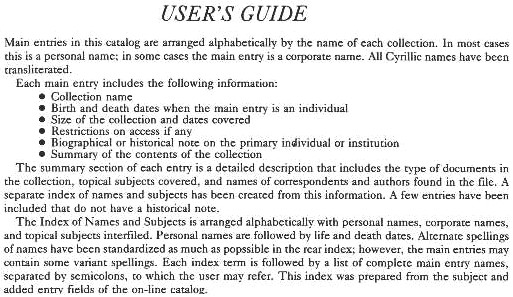 A guide to scholarly resources on the Russian Empire and the Soviet Union in the New York metropolitan area.

As Edward Kasinec points out in his foreword to this volume, the New York metropolitan area offers rich resources for anyone who has an interest in the study of the culture of the Eastern Slavs, both in homeland and in emigration. The guide provides location and description of 153 collections, institutional and private. Most of these descriptions are brief, even for the larger institutions. When possible, the compilers appended to the entries bibliographies that cite articles and books describing the holdings in more details. The entries are organized in alphabetical order by institution or by the name of owner of a private collection. A 56-page index, organized in alphabetical order by name/subject, allows easy access to the entries.

Guide to information resources in ethnic museum, library, and archival collections in the United States .

This compilation lists only two locations for archival materials on Russian émigré activities in the USA which we illustrate below. 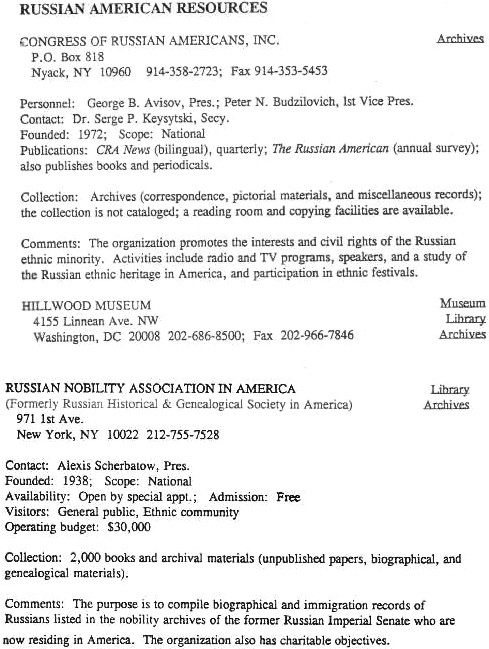 For political reasons, the archival depositories of “Russia Abroad” in the Soviet Union were never described publicly, although since 1917 the wealth of materials had been accumulating in these depositories. Private documents that were left behind by those who fled Russia and confiscated by the officials; “gifts” from the governments of those countries in Eastern Europe that sheltered Russian emigrants before they came under the Soviet regime; materials that were brought along by emigrants who decided to return to the Soviet Union; and materials that were passed on to the Soviets by the émigré families on the wave of great patriotic feelings after the end of World War II, are just a few sources, among others, that comprised the “SpetsKhrany”- special depositories of different archival institutions in the USSR. Eventually, with the fall of the Soviet Union the situation with these kind of archives has been changed dramatically. Along with a growing interest in the subject of “Russia Abroad”, we are witnessing the ongoing process of opening up and inventorying of special depositories, the creation of new ones; and attempts to reorganize the structure of institutions, which were responsible for the collections of “Russia Abroad” archives, to function more effectively. For those who want to learn more about the present state of these processes and about the history of the archival depositories of “Russia Abroad” there is a book which is annotated below.

The author gives an extended and detailed history of the subject supplemented by a bibliography. So far this book is the best guide for the depositories of Russian emigration in the archival collections of Moscow. A name index is provided.

This archival guide was compiled as a result of the declassifying of the special depositories of the Russian State Archive of Literature and Arts that started in 1987. Listed are depositories of private individuals and organizations, 190 in all. The guide is supplemented by a name index.

Archives of Russia: a directory and bibliographic guide to holdings in Moscow and St. Petersburg .

This irreplaceable source for anyone who ever decides to use Russian archival resources was produced from the computerized archival directory and bibliographic database system known as ArcheoBiblioBase (ABB) which first started in Russia in 1991. According to the compilers’ statement, this hard copy should not be considered a final text, but rather an interim step. Computerization is the only efficient way to cope with the constantly changing transitional situation of archives within the Russia Federation. Thus, parallel ABB data files in English and Russian are now based at Rosarkhiv headquarters in Moscow, where periodic updates, supplements, and an electronic version are planned. Access to information on depositories of “Russia Abroad” materials is possible by using the Index of Personal Names and Subject Index (emigration, Russian, archival sources (Rossica) ) in the second volume.

If you intend to search the Internet for information on Russian emigration we suggest the COPERNIC search engine (it is not searchable in Russian fonts) and the use of search words “special collections russian archive” and “russian émigré archive university collections” for finding information on “Russia Abroad” depositories around the world. Another possibility is to use as a search term the word “archive” in combination with a name of a person or organization which is a subject of the search. The use of the term “archive” alone will bring a devastating amount of Internet sites.

The website of the Dom Russkogo Zarubezh’ia offers a variety of resources for researchers; it provides information about the Dom’s library and archives holdings, its publications and upcoming conferences. The Proekty Nauchno-issledovatelskogo Tsentra webpage may be of most interest: following the links to their projects one can find multiple scanned publications and bibliographies on a variety of topics pertinent to Russia abroad as well as tables of contents of Russian language emigre journals. One of the Dom’s projects deserves a special mention: they scanned and put on the website www.minuvshee.ru 70 issues of the émigré journal Sovremennye Zapiski (Annales contemporaines)( UIUC Call Number: International & Area Studies Russian Reference (Slavic) 057 SO index; Oak Street Facility 057 SO v.1-70).

Emigrantika was created by one of the associates at the Dom Russkogo Zarubezh’ia as a personal initiative to promote research on Russian emigration. As of this writing (June 2010) this website is partially under development but it nevertheless offers some unique materials: in addition to bibliographies devoted to various aspects of Russian émigré life the website has full-text scanned versions of Russian journals published in Paris in 1920-1940.

In addition to geographical identifiers listed below, you might try more geographic terms (country and city names) since new materials appear constantly. For example, recently the library received a new book about Russian emigration in Egypt and Tunis.