As is the case with monographs, periodical publications for Ukraine can often be tracked, at least in part, in foreign bibliographies. The Russian, Austrian and Polish bibliographies can be very useful if you are working in a collection that does not have strong Ukrainian bibliographic holdings. Catalogs such as the National Library of Russia can be very helpful in these situations. Those sources that have geographic or language indexes are especially helpful in tracking publishing patterns in general. Since Ukrainian was not allowed as the publishing language during many periods a language index is often not helpful.

When searching for verification of specific titles, most comprehensive bibliographies will be useful. The Russian bibliographies will most commonly have the Ukrainian titles translated into Russian even when the journals were being published in Ukrainian. However, some of the most comprehensive sources have no geographic or linguistic organization. Therefore, Lisovskii will be helpful, albeit somewhat difficult to use as it has no true index by place of publication or language. In order to find information on a Ukrainian title in this source the scholar would have to have the name of the journal from the beginning. Lisovskii is partially accessible online thanks to Indiana University. This database provides digital access to Lisovskii from 1956-1975. For the period from 1900 to 1916 the Russian source Bibliografiia periodicheskikh izdanii Rossii can be used to identify titles published in Ukraine as it contains a geographical index in volume 4. The Soviet bibliography Periodicheskaia pechat’ SSSR 1917-1949 has an index by language but some titles will have been censored.

Having said this, it is also important to look for changes in bibliographic publications. One useful trend in periodical bibliographies for Ukraine is the appearance in recent years of several annotated bibliographies on Ukrainian periodicals. They are often geographically limited, but provide detailed information on the publications for the regions covered.

Catalog of magazines and periodicals

The National Library of Ukraine supports periodical resources with the Subsidiary Fund of the Periodicals Services Center of Ukraine. This fund supports an open access policy for many of the periodicals held at the National Library. This Catalog of magazines and periodicals offers a searchable catalog with advanced and simple search functions. Topics covered include science, ecology, astronomy, construction, transportation, history, culture, religion and more.

This is one of the most comprehensive bibliographies of Ukrainian periodical publications for the pre-revolutionary period. Titles are arranged chronologically. All publications focused on Ukraine are included here regardless of language. There are titles in Russian, German, and Polish. The entries are extensive for each title with complete publishing history, list of editors, and notes on title changes and changes in periodicity. The volume is also thoroughly indexed with a title index, an index of editors, index of place of publication and an index of publishers. This is an essential source for anyone doing research on the nineteenth century in Ukraine. It is also an important source for research on early Ukrainian emigre publications which can readily be identified here using the geographic index.

Levytskii is important not only for identifying periodical titles. This source lists the contents of periodical publications. For a complete description and sample entry see citation in file on monographic bibliography.

This is a study of periodical publishing in Lvov during the turbulent years from 1848 to 1939. The first volume includes publications issued up to 1900. The entries here are very extensive. Below is one of the entries from this bibliography. It is unusual in that it is rather brief. 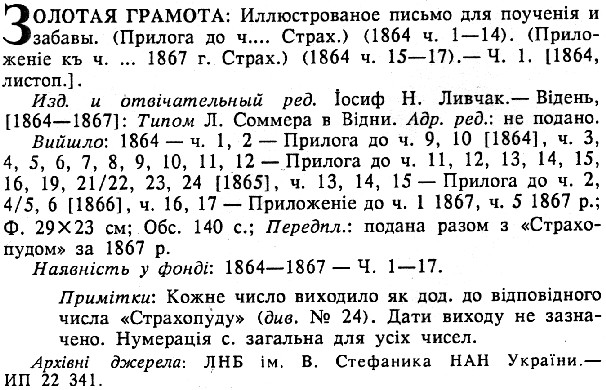 Each entry includes a history of the publication, citations to archival mateials and published works related to the journal. The citations are arranged chronologically into four sections: 1848-1859, 1860-1880, 1880-1889, 1890-1900. The volume opens with lengthy essay on the history of the press in the region, comprising the first 150 pages of the work. The bibliography also includes an index of names, an alphabetical list of titles, a chronological list of titles and an alphabetical list of publishers. While this volume is limited to Lvov, it is an unusually thorough study of periodical publications in the 19th century.

This heavily annotated source provides a complete picture of periodical publishing in Galitsia in the late Imperial and early Soviet periods. It provides extensive tabular data showing information on periodicity, subjects, and place of publication. The bibliographic entries are arranged chronologically with sections covering the years 1865-1898; 1898-1905; 1905-1917; 1918-1920; and 1921-1939. The title, editor, name and geographic indexes supply all the needed access points to make this a truly excellent source for studying the periodical publishing history of Galitsia. The sample entry below is very brief, but does give an idea of the kind of information to be gleaned from this source. It should be noted that most of the entries in this source were at least one page and many were several pages in length. 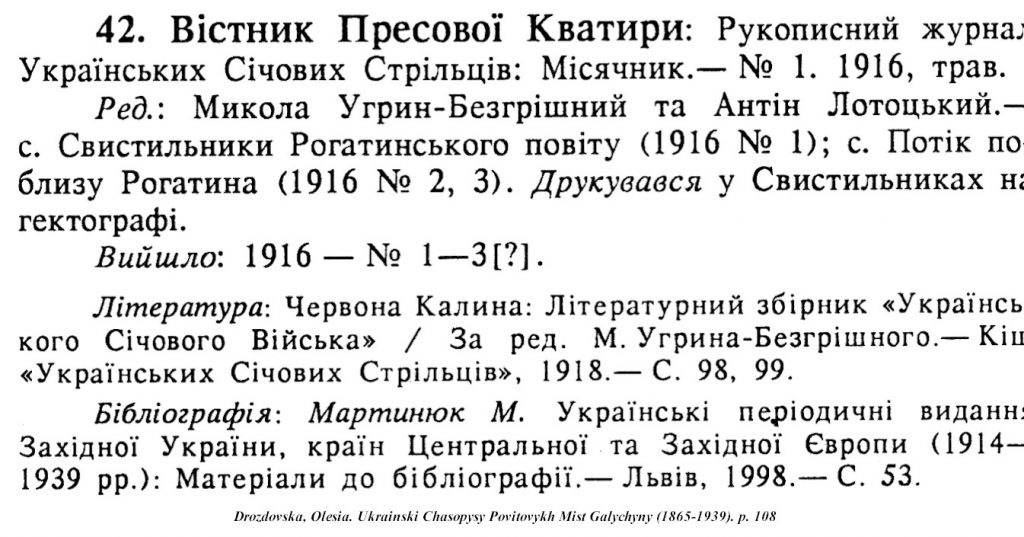 Some 1340 bibliographic entries are included in this list of Ukrainian periodicals published between 1914 and 1939 in Western Ukraine and central and western Europe. All titles listed here are in the Ukrainian language.

Entries are alphabetically arranged by title with an index of names and geographical locations to assist the user in identifying titles. In the body of the bibliography, entries include full title information, frequency, publication information, information on editorial staff, when available, and supplementary information on title changes, reviews of the journal, the legal status of the publication, or special features of the publication such as unusual format, illustrations, etc. The volume includes a brief listing of title, years and place of publication after the main listing. Its entries complement those found in Periodychni vydannia URSR 1918-1950 which includes the publications of Eastern Ukraine. 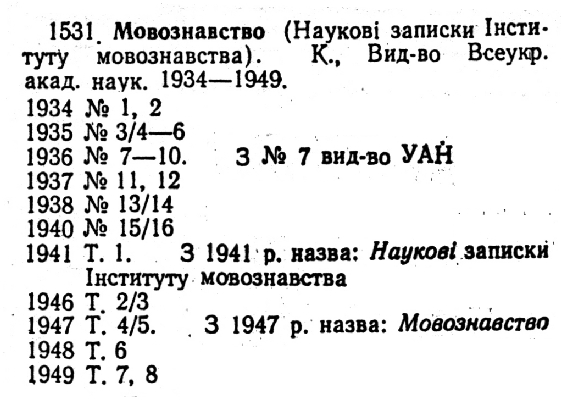 This study is aimed at those interested in the history of periodical publishing in Ukraine during the very tumultuous period of the early 20th century. It is a very thoroughly annotated source with extensive information on each title including the years the publication was issued, all volume numbers, a list of the editors involved in the publication and a history of the publication. So extensive is the information provided, no entry was brief enough to reproduce here. Each volume includes a name index, a chronological index and an alphabetical index of geographical names to augment the alphabetical title entry of the volume. Those interested in the western Ukraine during the 1920s and 1930s will find this a valuable resource.

This is the Ukrainian counterpart to the Soviet Periodicheskaia pechat’ SSSR 1917-1949 and Letopis’ periodicheskikh i prodolzhaiushchikhsii izdanii. Like the Russian publications, this Ukrainian bibliography of periodicals lists all the periodicals issued in Ukraine, supplying full publication information for each title. It is different from the Soviet publication in its organization, listing the periodical entries by alphabetically by title. There are a number of indexes at the end of the volume to facilitate access including an index of issuing bodies and a geographic index. The volume also includes a table arranging the titles alphabetically and showing their chronological range.

The supplementary volume has a similar arrangement but includes a subject index as well.

This is a list of the newspapers, journals, almanacs and other types of periodical publications issued in or about Ukraine between 1816 and 1916 and from 1917- 1945. The titles listed here reflect the holdings in the periodical archives of the Ukrainian Academy of Sciences. The entries are arranged alphabetically. Each entry includes very brief title and publication information along with a list of the library’s holdings. The publication is, therefore, of particular interest to those planning research trips to L’vov. It is also a useful source for those seeking information and a holding location for emigre publications as it includes titles published outside Ukraine that concern Ukraine and its populations. There is a geographic index at the end of the volume which is essential for identifying these titles.

This is a very complete list of the newspaper holdings at the Ukrainian Academy of Sciences. All entries have complete publication information including the names of various editors involved with the papers. The exact holdings for each title are included with the alphabetically arranged entries. Titles published in the Latin alphabet are listed separately at the end of the volume. Most volumes include a geographic index of some sort. The first volume also includes an index of names facilitating access to the editors and publishers.

This publication is both a listing of periodical publications of Kiev University and an index of the contents of its periodical publications. The items are listed by University department. The contents of specific journals are not listed under journal name but rather each article is listed under the name of its author. If one is trying to track the research of an individual scholar this is a very useful source. If however, you are seeking a list of the complete contents of each title this will not be the best resource.

This bibliography lists only those titles published in Poland between 1918-1939. It includes a great deal of information. 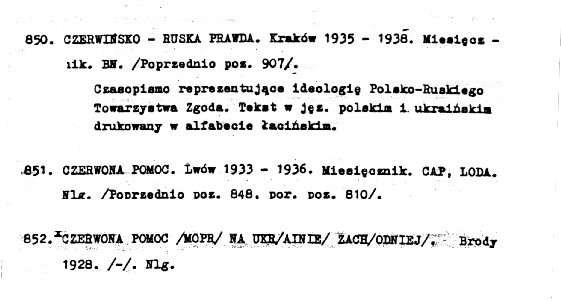 As can be seen from the above citations, each entry includes the full title, the place of publication, the publisher, the frequency, holding locations, legal status, information on addendums, title changes, etc, short description of the work. A table with the abbreviations of the holding institutions is included at the beginning of the volume. Holdings for libraries include listings for New York Public Library, the Marunchak Collection in Winnipeg, the Mohyla Institute in Saskatoon, the British Museum in London, Slovanska Knihovna in Prague, the Ukrainian Cultural and Educational Centre in Winnipeg, the Library of the University of Illinois, the Ukrainian National Federation in Toronto, the Ukrainica Research Institute in Toronto and St. Wladimir Institute in Toronto along with approximately 44 Polish libraries and archives. The titles are arranged alphabetically in the volume which includes an index of places, corporate bodies and a supplementary list of titles.

In many ways this catalog continues the national bibliography of Ukrainian periodicals Periodychni vydannia URSR. The database includes over 10,000 periodical records. It is possible to search by title word or subject. The entries are brief put provide basic information: full title, publisher, frequency, beginning date of publication and ending date of publication (where applicable) and call number. Since no supplement of Periodychni vydannia/Litopys vydan.

Published twice monthly since 1936 this series is the Ukrainian general index to periodicals. This publication is part of the national bibliography, one of several subseries of the main series Litopys Knyh. It is not intended as a comprehensive index of all periodicals published in Ukraine. Rather, it selectively indexes major academic and popular titles, listing their contents by subject categories. Issues include at the beginning of the publication a list of the periodicals indexed. All subject areas are included from astrophysics to politics. It is a rich source of information for anyone seeking periodical articles from the twentieth century on about any topic. There is also an author index in each issue.

Also published twice a month since 1937 this is the newspaper counterpart of Litopys zhurnal’nykh statei. The arrangement is very similar to that of the periodical index. All articles are arranged by subject and each issue has an index of authors. There is, unfortunately, no list of the titles indexed in the individual issues. Still, this is a very valuable source when seeking retrospective materials published in the press, particularly as, in the past, newspapers did not generally have their own published indexes. When seeking coverage of topical issues this source is often the only way to identify specific articles that appeared. This publication is part of the national bibliography, one of several subseries of the main series Litopys Knyh.