In 1921, after the Red Army had entered Tyva, in Southern Siberia, the Soviet leadership established a Tuvan People’s Republic. It was an independent state (although this was only acknowledged by the Soviet Union and Mongolia) until 1944, when Tyva was renamed the Tuvan Autonomous Oblast’. In 1961, it became the Tuvan Autonomous Soviet Socialist Republic, and in 1992, it became the Tuva Republic, within the Russian Federation. Its official name was changed from Tuva to Tyva in 1993. Its capital is Kyzyl. Tyvan is a Turkic language.

The following is a beginning guide to bibliographic tools for researchers of Tyva. Though not a comprehensive overview, this guide outlines three primary ways research can access bibliographic information about Tyva publications:

However, as of Summer 2018, none of the links to access these databases appear to be working.

The Russian National Library’s Department of Literature in National Languages [also known as the Department of National Literatures] of the Russian Federation, Commonwealth of Independent States, and the Baltic countries has reproduced holdings catalogs in microfiche format. The national languages imprints catalogs in microfiche format diffuse most of the difficulties associated with transliteration in the vernacular languages, spelling, forms of entry, and uncertainties with the entirety of the collection. Researchers can access the entire holdings for a specific language at the Russian National Library through the microfiche set; conveniently exporting selected titles via PDF scans. The following scans reflect some of the Tyvinian language holdings available in microfiche format. 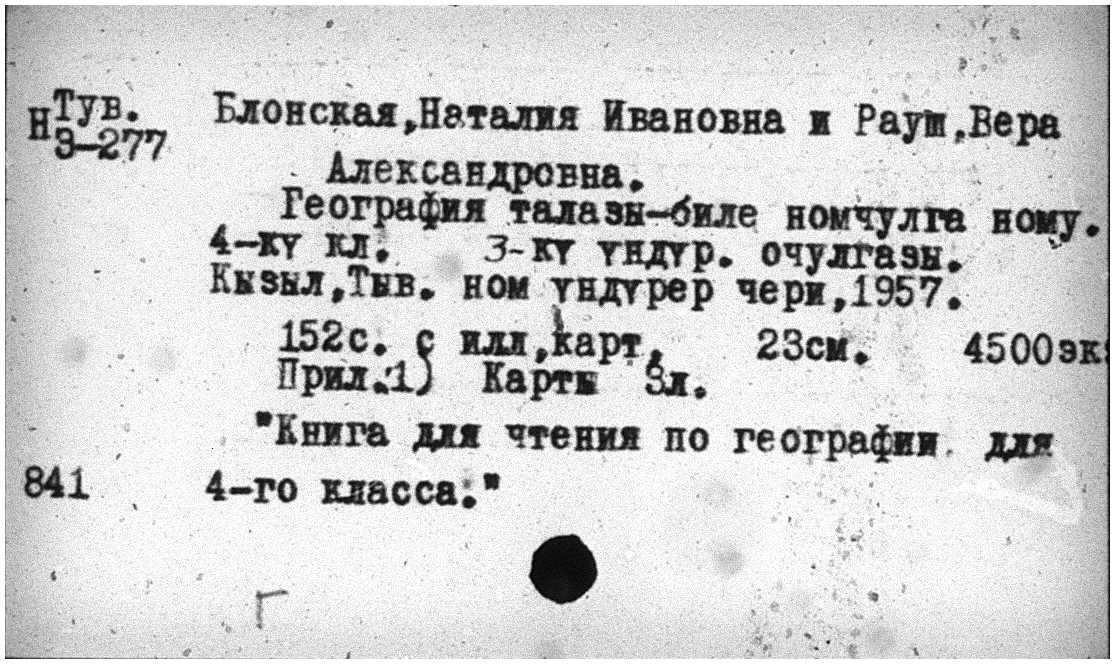 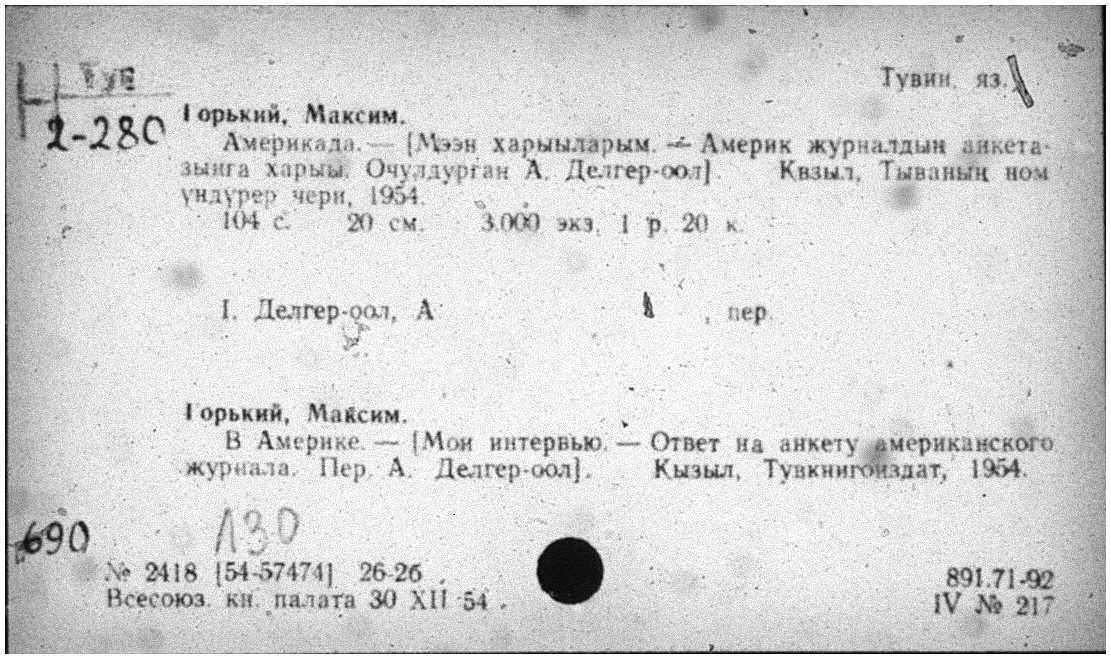 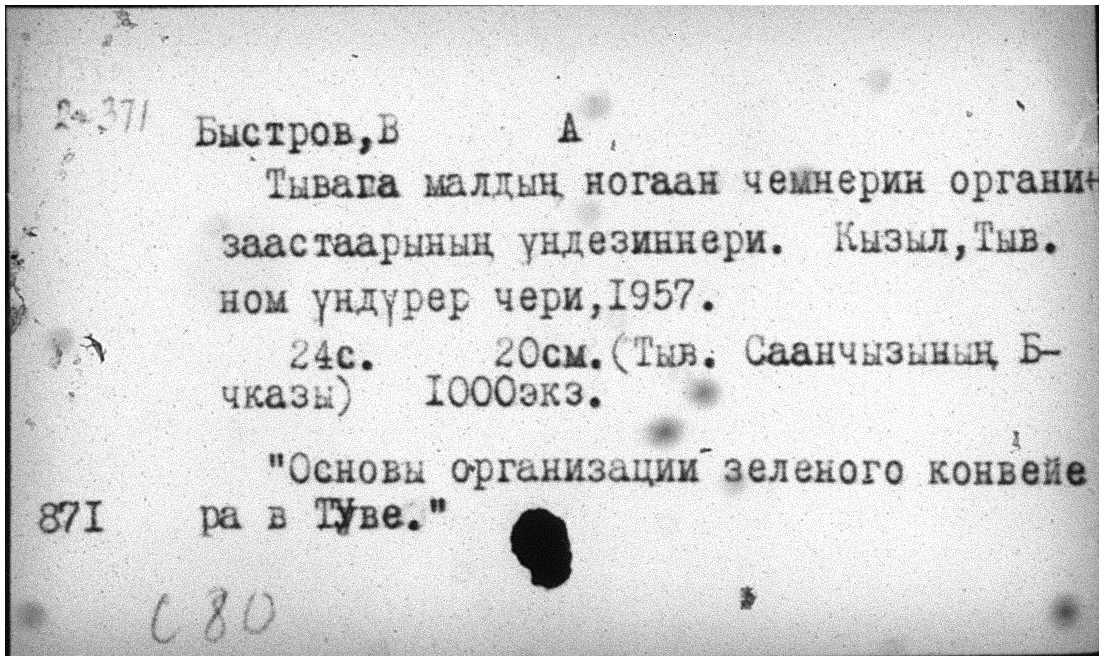 The Tyvan Electronic Library is a collection of select digitized documents that are available to users in full-text format. On the website of the electronic library, users can browse digitally available rare books according to the following categories:

Since 1958, the A.S. Pushkin National Library of Tyva fulfills the role of Book Chamber for the republic. In 1960, a special section for National Bibliography was created for this purpose. The Book Chamber is primarily responsible for creating an archive of the materials published in the republic, to secure the preservation of the national bibliography. The Book Chamber also creates bibliographic and statistical records of these publications. Annually, it compiles and publishes the bibliographic guide letopis’ pechati for Tyva. The letopis’ pechati provides a systematic overview of all the books, articles, periodicals, newspapers, pamphlets, and music published in Tyva in a given year, as well as literature about Tyva published in other parts of the Russian Federation and abroad. On the website of the National Library, users have online access to all the issues of the letopis’ pechati from 1968 to 2016 (with the exception of 2012). Through WorldCat, users can also find issues of the letopis’ pechati for Tyva in physical (OCLC accession number 12391968) and electronic form (OCLC  accession number 609717796).

In 1974, 74 books and pamphlets (381,000 copies) were published in Tyva. The following are a select list of newspaper publications within Tyva and the dates on which they began publication: Shyn (Pravda) (1925), Tyvanyn anyiaktaru (1933), Tuvinskaia pravda (1924), Ulug-Khem (1946). Users can consult Gazety SSSR 1917-1960: Bibliograficheskii spravochnik 5 for a more comprehensive list of newspapers published in Tyva during these years.

The guides provide short descriptions of the different fonds in the collection, as well as the year they were created. Users can access these guides online, and download them as PDF files.

The official languages of Tyva are Tyvan and Russian. Tyvan is a Turkic language that is also referred to as Diba, Kok Mungak, Soyod, Soyon, Soyot, Tannu-Tuva, Tofa, Tokha, Tuba, Tuvan, Tuvia, Tuvin, Tuvinian, Tuva, Uriankhai, Uriankhai-Monchak, and Uryankhai. Until the 1930s, Tyvan did not have an official written language. In the 1920s, several different scripts were used for the Tyvan written language, primarily literary Mongolian, which was based on the Old Mongolian script. Between 1930-1943, the Tyvan written language became officially based on the Latin script, and since 1943, it has been based on the Cyrillic script. In addition to the letters of the Russian alphabet, the contemporary Tyvan alphabet includes the following letters: Ң ң, Ө ө, and Ү ү. Users interested in working with vernacular languages can download a Cyrillic extended keyboard that can be used for Tyvan and many of the other national languages of the Russian Federation.