The Tatar Autonomous Soviet Socialist Republic was founded in 1920. In 1992, it was officially granted the status Republic of Tatarstan, within the Russian Federation. Its capital is Kazan. Tatar is a Turkic language, and is also referred to as Kazan Tatar and Tartar.

This is a preliminary guide to bibliographic tools for researchers of Tatarstan. Though not a comprehensive overview, this guide outlines three primary ways researchers can access bibliographic information about Tatar publications:
(1) The Russian National Library’s Department of Literature in National Languages imprint catalog
(2) The National Library of the Republic of Tatarstan online library catalog
(3) The letopis’ pechati for Tatarstan

The National Library of the Republic of Tatarstan was established in 1991. The website includes a list of reference resources and of publications.

The National Library of the Republic of Tatarstan has a searchable electronic catalog. Users can search by material type, language, author, title, date of publication, ISSN, ISBN, theme, language, and control number. There are documents in both Russian and Tatar, and users can search in both languages. The advanced search interface is shown in the image below. 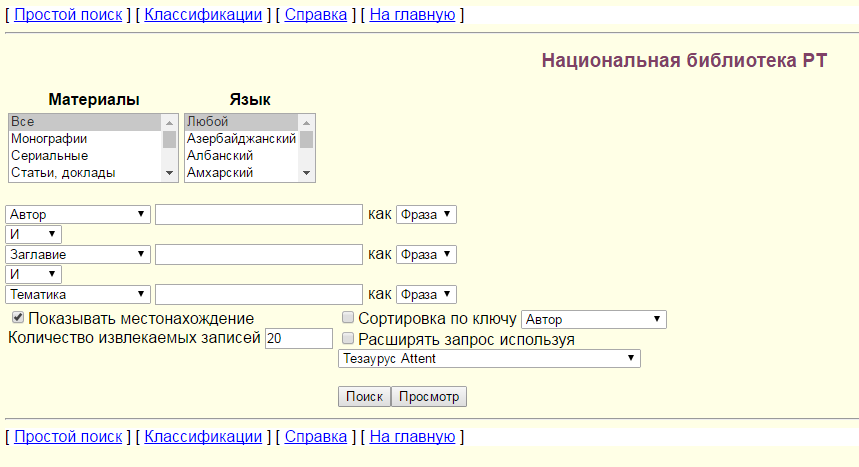 This is a database of documents across 49 different libraries in the Republic of Tatarstan. The number of libraries participating increases every year and currently all libraries under the ministry of culture are included. Furthermore, searches will reveal results from the entire collection of the municipal libraries of the Republic of Tatarstan. Users can search by author, title, subject, publication year, ISBN and ISSN. Users can also choose to search only in one particular library, if needed. Searches can be conducted in Russian and in Tatar.

Results show basic bibliographic information as well as information about the holding location. Additionally, the National Electronic Library of the Republic of Tatarstan has a number of collections that users can access online for free. There are currently 4,562 documents total in these collections. The following collections are included at the time of writing, but additional documents are being added daily.

Please note that due to maintenance issues this website may time out. This can be corrected by refreshing the page.

The Russian National Library’s Department of Literature in National Languages [also known as the Department of National Literatures] of the Russian Federation, Commonwealth of Independent States, and the Baltic countries has reproduced holdings catalogs in microfiche format. The national languages imprints catalogs in microfiche format diffuse most of the difficulties associated with transliteration in the vernacular languages, spelling, forms of entry, and uncertainties with the entirety of the collection. Researchers can access the entire holdings for a specific language at the Russian National Library through the microfiche set; conveniently exporting selected titles via PDF scans. The following scans reflect some of the Tatar-language holdings available in microfiche format. 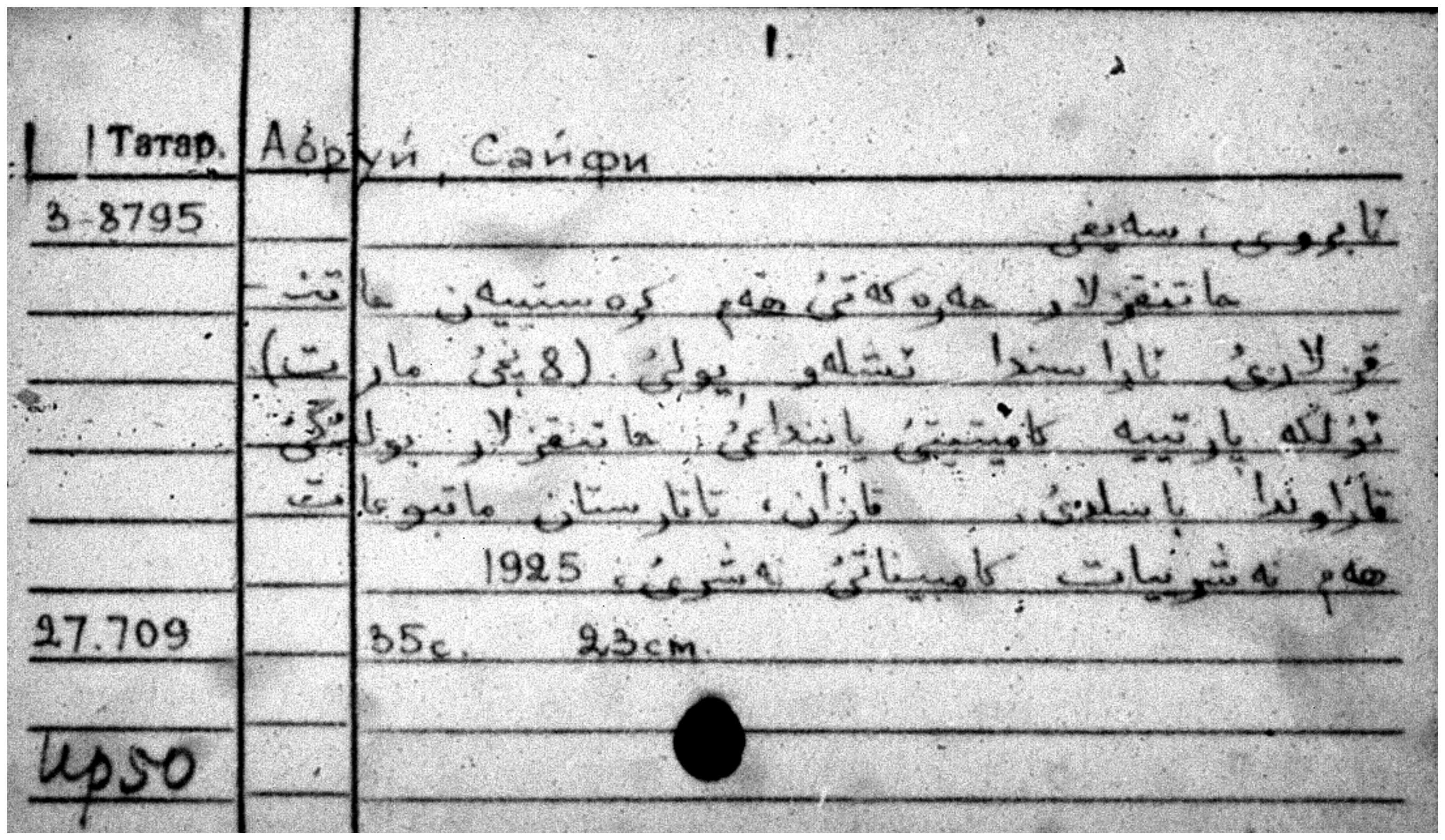 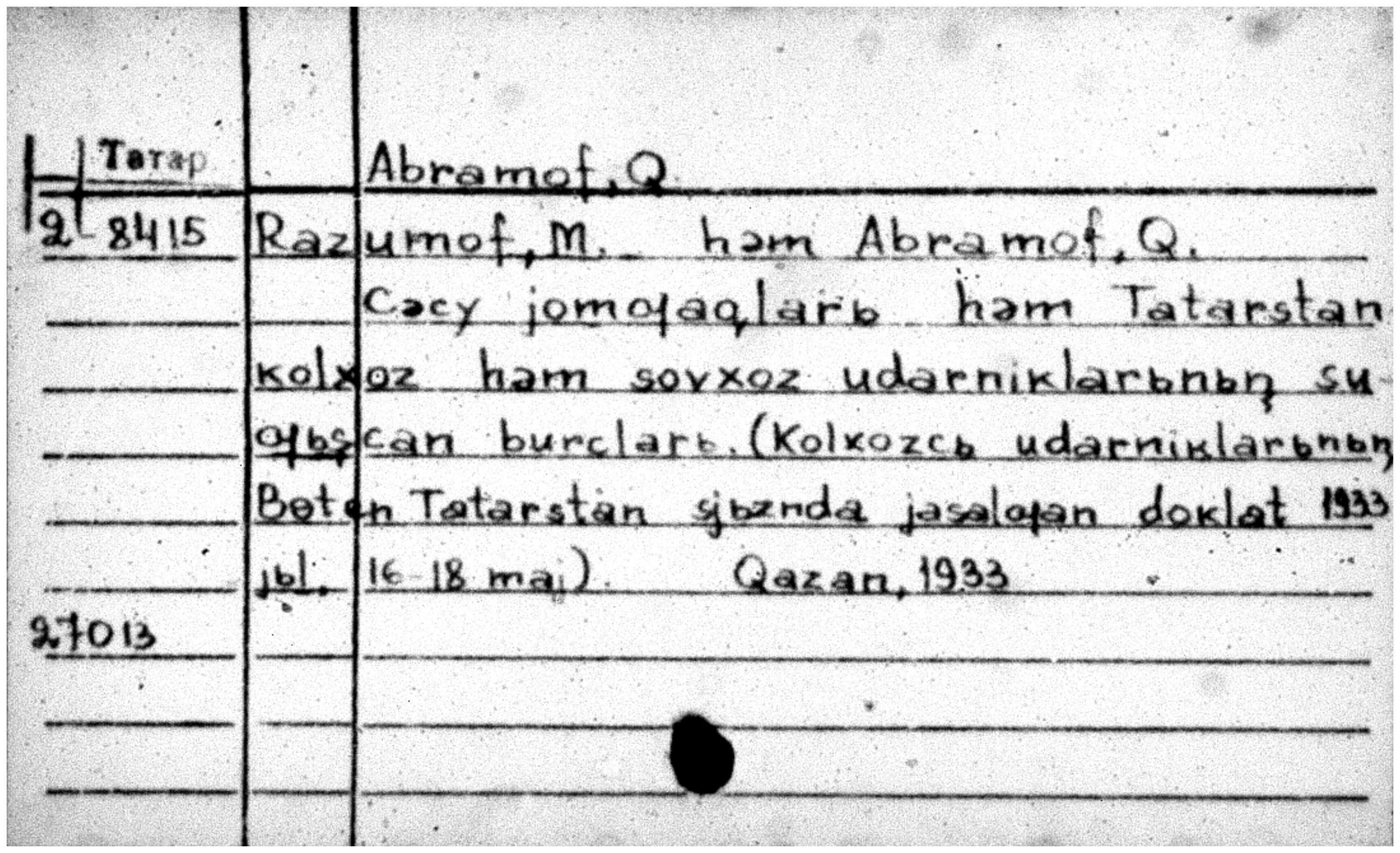 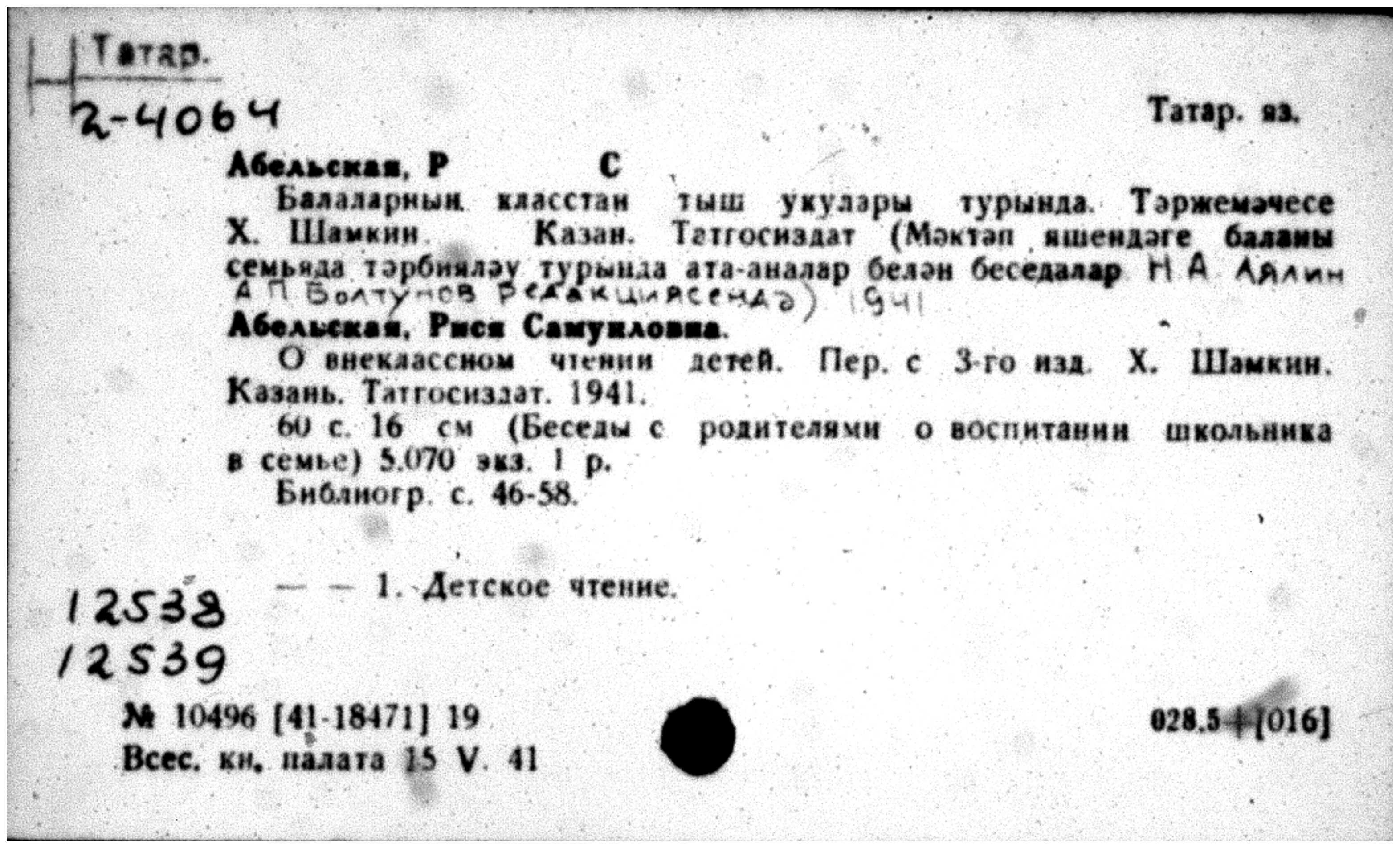 Letopis’ pechati and publishing in Tatarstan

In the sphere of publishing, the Tatar ASSR experienced a strong growth in the first decades of the Soviet period. In 1958, around 500 new books were published, and in 1959 already over 600. In 1960, the republic published 34 periodicals and 128 newspapers. Alongside publishing, the number of publishing houses and libraries also expanded. Whereas in the pre-revolutionary period only a small number of publishing houses existed, in 1959 this number had increased to 62, and the number of libraries to over 2,400. In 1974, Tatarstan published 478 books and pamphlets, 129 newspapers (1 million copies), and 47 magazines (1.3 million copies). The following are a list of republic-level newspapers including their first year of publication: Sotsialistik Tatarstan (1918); Tatarstan yash’lere (1920); Yash’ leninchi (1924); Sovetskaia Tatariia (1917) and Komsomolets Tatarii (1919). Users can consult Gazety SSSR 1917-1960: Bibliograficheskii spravochnik 5 for a more comprehensive list of newspapers published in Tatarstan during these years.

In 1926, for the first time in the Tatar Republic, a Book Chamber (knizhnaia palata) was established in Kazan, which is responsible for keeping bibliographic and statistical record of all the publications in the republic and collecting and preserving rare materials. The Book Chamber is also responsible for publishing letopisi pechati for the republic: bibliographic overviews of the books, articles, periodicals, and other materials published in Tatarstan in a given year. In the Soviet period, letopisi pechati were published in different forms:

The letopisi pechati for 2006-2016 are available online on the website of the arkhivnaia sluzhba Respubliki Tatarstan. On this page, users can also find bibliographies associated with specific themes and years of the Soviet period. Through WorldCat, users can also find earlier issues of the letopis’ pechati in physical (OCLC accession number 26465708 or 34272860) and electronic form (OCLC accession number 609865404 or 742437488).

For users interested in working with archival materials, the website “Arkhivnaia sluzhba Respubliki Tatarstan” (www.archive.gov.tatarstan.ru is unresponsive as of January 2020) provides a helpful guide for some of the major archives of the Republic of Tatarstan:

For each of the archives, the website provides information about the history, collections – including an overview of the available fonds – new materials, opening hours, and additional services.

The Academy of Sciences of Tatarstan

The Academy of Sciences of the Republic of Tatarstan is one of the major research institutions in the republic. In its current form it was founded in 1991, although its predecessor, the Society for Tatar Studies (Obshchestvo tatarovedeniia) already existed since the late 1920s. The institute’s website provides an overview of its subdivisions and projects, as well as bibliographic records of their publications. Electronic versions of the institute’s journals for recent years are also accessible on the website (under “Izdatel’stvo Fen”).

Tatar is a Turkic language, and is also referred to as Kazan Tatar and Tartar. Until 1928, the Tatar written language used an Arabic script. Between 1928 and 1939, a Latin alphabet was introduced, and in 1939 there was a turn to the Cyrillic script that it still uses today. The Tatar alphabet has a number of characters that do not exist in the Russian alphabet: Ә ә, Җ җ, Ң ң, Ө ө, Ү ү, and Һ һ. Users who are interested in working with vernacular languages, can download a Cyrillic extended keyboard that can be used for Tatar and many of the other languages of the Russian Federation.