Only in recent decades has the question of a Moldovan national bibliography become relevant. The place itself, the Republic of Moldova, as well as the language, Moldovan/Romanian, are both historically controversial. Part of the Russian Empire from 1812 to 1918, the land historically known as Bessarabia became incorporated into the interwar Greater Romanian state after WWI. Changing hands violently during WWII, it became part of the Soviet Union for 47 years beginning in 1944, declaring independence only in 1991 with the collapse of communism. This Soviet Moldovan entity was one of the fifteen republics within the USSR, known as the MSSR, the Moldovan (Moldavian) Soviet Socialist Republic. In many ways, it was based on the MASSR, the Moldovan Autonomous Soviet Socialist Republic, which had been launched in 1924 on the border of Bessarabia, in a region of Ukraine known as Transnistria, or Predniestrovie. It was here that a Cyrillic Moldovan alphabet (which had been the norm for medieval Romanian until the advent of modern nationalism in the 19th century) was developed to reflect Soviet concerns and interests and from where the “struggle for national liberation of the Moldovan people from the Romanian/capitalist occupiers” was launched via propaganda leaflets and speakers that circulated against Romanian law throughout interwar Romanian Bessarabia. It was because of propaganda interests that the decision to indoctrinate the Moldovan population in a Cyrillic-scripted Moldovan was reversed between 1932-1938, when the Latin-script was re-instituted briefly before being reversed again. The Moldovan nation remains a contested idea, not only between Russia and Romania but among Moldovans themselves. Unlike many other nations incorporated into the USSR or the Russian Empire before it, the Moldovans had no solid national idea before their incorporation into the post-WWII Soviet state. Thus, 19th century the publications from the region of Moldova can be found in the Russian National Bibliography. After the Soviet re-occupation of the region in 1944, Kishinev or Chisinau was refashioned as the new capital of a soviet republic and the established Moldovan bureaucracy was moved from Tiraspol in Transnistria to the new capital where they began to construct a new political, socioeconomic and intellectual order.

Part of this order was the opening of the MSSR State Book Chamber on June 7, 1957. Correspondingly, beginning in 1958, a Moldovan version of Knizhnaia Letopis, entitled Kronika Presei RSS Moldovenesht’, began being published in Chisinau. Because this work was subject to the Soviet censors it cannot be understood as completely comprehensive. Furthermore, it is important to note that Soviet-era Moldovan bibliographers and scholars by no means considered this the beginning of their national bibliographic tradition. Rather, party ideology was insistent that the origins of Soviet Moldova lay with the MASSR, or in 1924. Thus, the tracking of publishing statistics, for example, began in 1925, when there were only 15 titles (including monographs and journals) published in the newly-created Moldovan language published in Soviet Moldova. This number grew to an interwar high of 220 before falling off during the war years. Numbers rose quickly after WWII from 210 titles in 1946 to 703 in 1956, 1245 in 1966, and reaching a high of 1897 in 1974 before again trailing off toward the end of the Soviet era. The statistics for 1990, the last year that data was tracked, stood at 1277.

The 1990s have been a period of enormous change for the entire region and for Moldova as well. The country has been effectively split in two, the larger, majority Romanian-speaking Republic of Moldova (referred to as simply Moldova) west of the Dniester River and the majority Slavic (Russian and Ukrainian), internationally unrecognized, Russian-speaking PMR (Pridniestrovskaia Moldavskaia Respublika). In Moldova, a central contemporary marker of national identity is Language Day, August 31, 1989, when Moldovan leaders, supported by the public, changed the official alphabet of their language to Latin-script, a powerful statement of the association with Romania rather than the Soviet Union that still ruled from Moscow. This quickly affected publishing: the national bibliography, the Cronika Presei, changed in 1990 to Latin script. By the end of the 1990s, a new national bibliographic publication was being printed under the title of Bibliografia Nationala a Moldovei, which continues to the present. The record of new publications is listed in a national bibliographic publication that succeeds the old Soviet period publication.

The Central Book Chamber of the Moldovan Soviet Socialist Republic beginning in 1958 published separately a Chronicle of books (Kronika Kertsii-written yn Cyrillic, or Knizhnaia Letopis), a chronicle of journal articles (Kronika Artikolelor de Gazete, or Letopis’ Gazetnykh Statei), newspaper articles (Kronika Editsiilor Periodiche ale RSSM, or Letopis’ Periodicheskikh Izdanii MSSR), and a section about Moldova in the broader Soviet press (Moldova Sovetike yn Presa URSS, or Sovetskaia Moldaviia v Pechati SSSR).  The earlier issues of this publication contained a “Scheme for Classification of Literature into Organs of the State Bibliography,” which listed the topical breakdown of works in accordance with Soviet methodology. This section was dropped in later years, but the final section, a content numerical list that listed the number of titles per subject heading, was maintained until 1991. These aspects of Moldovan publishing were combined together beginning in 1963 into the Letopis Pechati Moldavskoi SSR, which was published quarterly until 1971, after which it began appearing monthly. Once a conventional order was established, each issue included the following sections, in order: books, musical scores, visual publications (photos, postcards, etc), bibliographical guides, journal articles, newspaper articles, and reviews. Items are presented in the language of their original publication, which in most cases means Moldovan. These entries typically (although not always) include a brief translation into Russian of the title and subject. 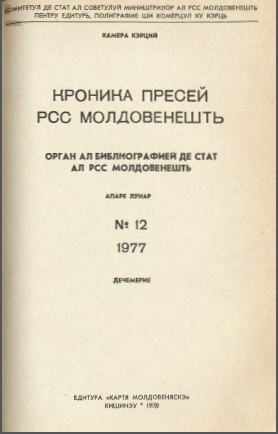 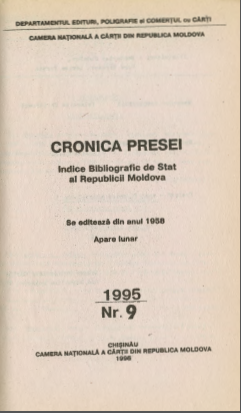 Not held at U of I Library. Listed at University of California, Library of Congress, Princeton, Columbia, Cornell, Texas A&M, and New York Public.

The “Books of Soviet Moldova” (Knigi Sovetskoi Moldavii) is the most important retrospective bibliography of monographs produced in Soviet Moldova. Aside from books, the coverage also includes brochures of a political-patriotic theme, alphabet teaching works and works for teaching reading. Soviet Moldova means particularly the post-WWII Moldovan SSR, but also the interwar autonomous region in Transnistria, the MASSR. The first volume, published in 1974, covers the first forty years of the Soviet-Moldovan project, from 1924-1964, after which the remainder of these publications were produced in five-year increments: 1965-1970, 1971-1975, 1976-1980, and 1981-1985. This reflected both an increase in publishing in Soviet Moldova by the 1960s and also the inclusion of more subjects in the later, more chronologically focused issues. There was no publication to cover the final years of Moldovan publishing under Soviet rule within this series. Basing their research on holdings in the archives of the Central State Book Depository, thoroughness was a goal of the editors; however, for the interwar era, when many of the books published in Moldovan were produced in Odessa, Kharkov and other cities outside the MASSR, there are gaps. Toward the end of the introduction (available in Soviet Moldovan and Russian) there is a description of what was included and excluded from the bibliographic compilation. This section may be very useful if the researcher is seeking something specialized: for example, brochures of circulation under 100 were not included here. This information is available only in the first volume; succeeding issues contain minimal prefaces.

The volumes are organized in traditional Soviet style, i.e. first a section on Marxism-Leninism, followed by a section on the party, party construction, the Komsomol, and then the sciences, particularly the social sciences in the first volume. Later issues coverage includes individual natural sciences, law and jurisprudence, and much more focus on engineering and industry. Toward the end of the volume are a name index and an index of anonymous publications, or place names in later volumes. The former is presented with Moldovan and Russian names intermixed while the latter separates the languages and presents two distinct lists. Some of the volumes have a geographical indexes as well. A table of contents follows the indexes. The entries themselves always list the Soviet Moldovan language information first, and often present the Russian if that was the original language of publication, which it typically was in the Moldovan case. Each of the volumes includes between 7000 and 8000 citations, although the first volume, which covers forty years, was comprised of two parts and was thus double this amount.

While the Russian National Library (a.k.a. the Saltykovka) had no particular mandate to collect materials from the non-Russian republics of the former Soviet Union, it was a depository library, and its Moldovan-language collection is certainly one of the best, arguably rivaling the collection in Moldova itself, particularly for the pre-WWII period. The many card catalogs maintained by the Saltykovka included dozens based strictly on the language of publication, i.e., separate card catalogs were created for the library’s holdings in all of the major and most of the minor languages of the USSR. The Saltykovka’s Kazakh catalog contained approximately 31,000 bibliographic records as of 1998, and these cards are here reproduced on microfiche. There are 53 microfiche for the Moldovan collection, each containing some 600 item records.

Nearly all the records are for monographs, and the few for periodicals do not include holdings information. Unlike the catalogs for holdings in the Russian National Library from most other former-Soviet Republics, which were often divided by script into different sections, the catalog for Moldovan books is integrated–presented alphabetically by author last name. The order is in Cyrillic, even for names in Latin script, meaning that one must anticipate what the name would be in Cyrillic (for example, Iancu appears at the very end of the list, under Янку). The collection reflects the Soviet Moldovan past: the earliest records are from the early 1930s, including some in Cyrillic Moldovan and some in Latin, reflecting the Latinization campaign in the middle of that decade. There is nothing in the collection from the early 1940s, when the region was re-occupied by Nazi-allied Romania. Beginning in the second half of the 1940s, records are in Cyrillic, and indeed the bulk of the collection is from the 1950s and especially the 1960s, 1970s, and 1980s. All the items from the 1930s were published in Tiraspol, after 1944, everything in the Moldovan language was produced in Chisinau. Beginning in the 1990s, when Moldovan again reverted to the Latin script, records were again predominantly presented in Latin Moldovan (Romanian) with a Russian translation offered as a separate record below.

There are obvious benefits to a card catalog reproduction such as this, including the fact that once desired materials are identified, they can then be requested or purchased in various formats from the Russian National Library’s Document Delivery Service . In some cases the Slavic Reference Service can order microfilm copies of Russian National Library holdings if an item is not held in the United States. In addition, within the collection there are several useful entries for other bibliographic sources. 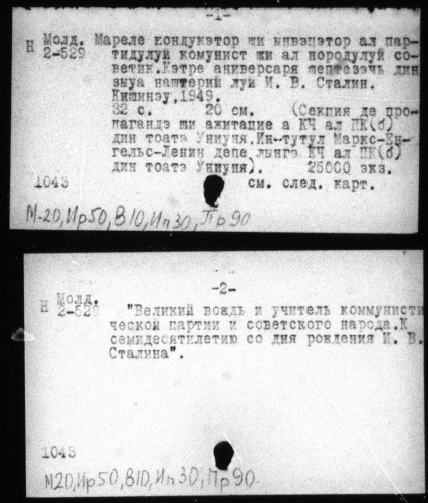 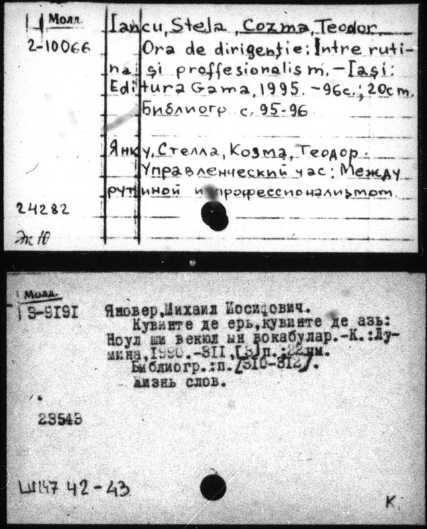