The Komi Autonomous Oblast’, in the Northern/Northwestern part of the RSFSR, was established in 1921. In 1936, it gained the status of Autonomous Soviet Socialist Republic. In 1993, Komi officially became the Komi Republic within the Russian Federation. Its capital is Syktyvkar. There are two languages under the macro-language, Komi: Komi-permyak and Komi-zyrian. Both are Uralic languages.

This is a beginning guide to bibliographic tools for researchers of Komi. Though not a comprehensive overview, this guide outlines three primary ways researchers can access bibliographic information about Komi publications:

(1) The Russian National Library’s Department of Literature in National Languages imprint catalog.
(2) The National Library of the Republic of Komi online library catalog
(3) The letopis’ pechati of the Komi Republic

Additionally, this guide highlights several other resources related to the history, culture, language, and national bibliography of Komi. Researchers may also want to consult the following online database for additional coverage: Elektronnyi katalog knig na iazykakh narodov RF i stran SNG on the homepage of the Russian National Library. Lastly, this guide highlights the electronic library associated with the National Library of Komi.

Note that when navigating the main library site in English, certain important information and links do not appear.

The Union Catalog (Svodnyi katalog bibliotek respubliki Komi) is a database which draws from all municipal libraries of the Republic of Komi. The database includes books, electronic resources, audiovisual materials, documents, cards, periodicals, musical scores, and articles in Komi, Russian and other languages. This catalog uses the OPAC interface and allows users to search by key word, author, title, serial, volume number, year of publication, language of publication, and to limit their search by other specialized limits (such as collection, serial number, warehouse, available electronic documents and publishing bodies). The image below shows the interface for the advanced search. 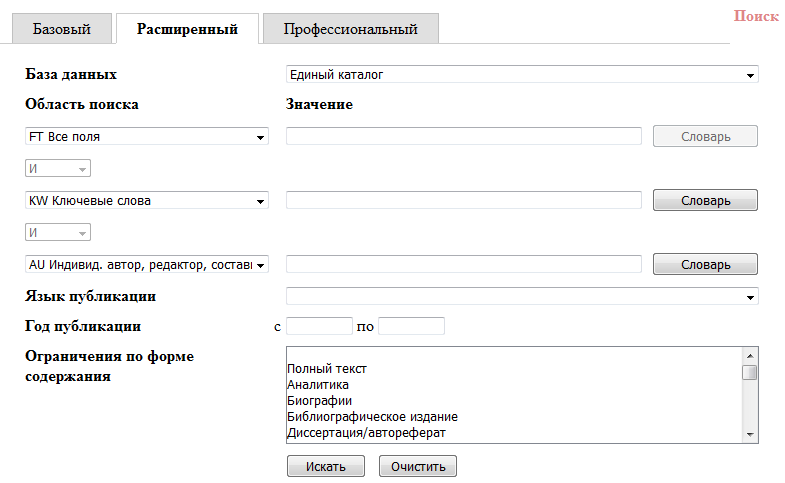 The Electronic Catalog for the National Library is a digitized bibliography which reflects the holdings of the National Library of Komi. This database includes records for periodicals, articles, internet resources and information about local Komi History. This catalog uses the same OPAC search interface as shown in the image above. Users can search by keyword, author, title, serial, volume number, year of publication and language of publication. Users can also define their search by other specialized limits such as collections, serial numbers, warehouses, available electronic documents and publishing bodies.

The Russian National Library’s Department of Literature in National Languages [also known as the Department of National Literatures] of the Russian Federation, Commonwealth of Independent States, and the Baltic countries has reproduced holdings catalogs in microfiche format. The national languages imprints catalogs in microfiche format diffuse most of the difficulties associated with transliteration in the vernacular languages, spelling, forms of entry, and uncertainties with the entirety of the collection. Researchers can access the entire holdings for a specific language at the Russian National Library through the microfiche set; conveniently exporting selected titles via PDF scans. Because there are two varieties of the Komi language, Komi-permyak and Komi-zyrian, there are two separate holdings. 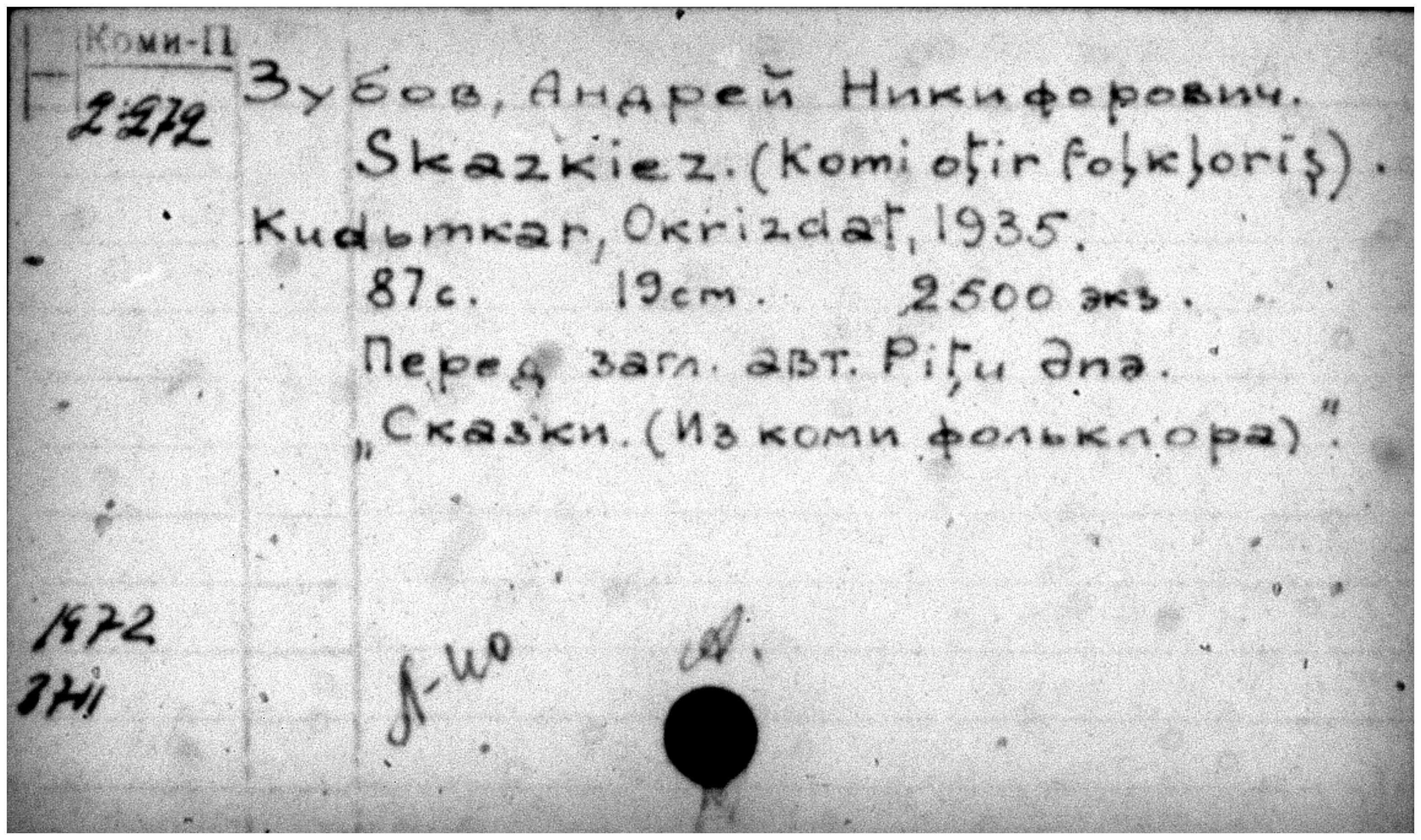 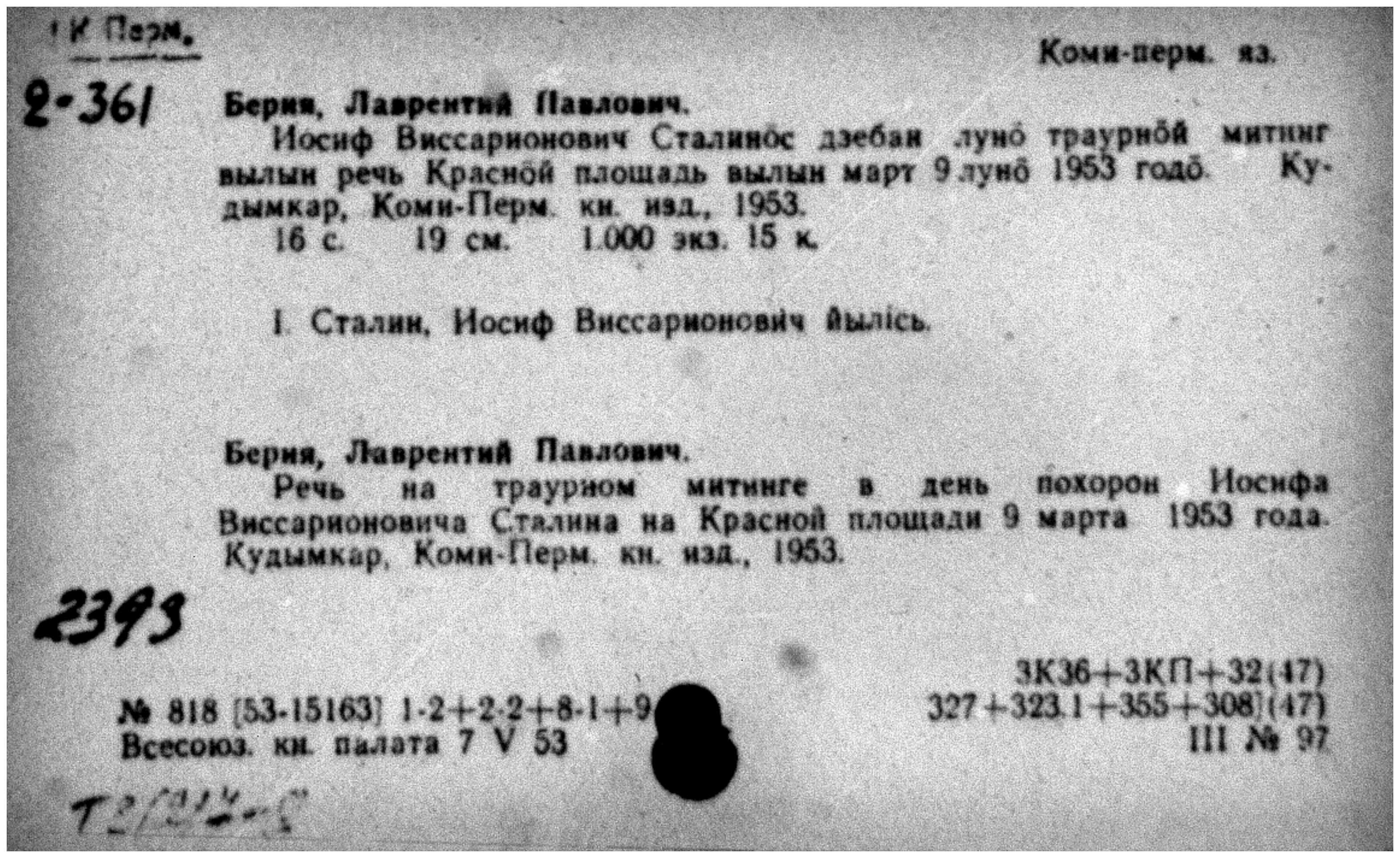 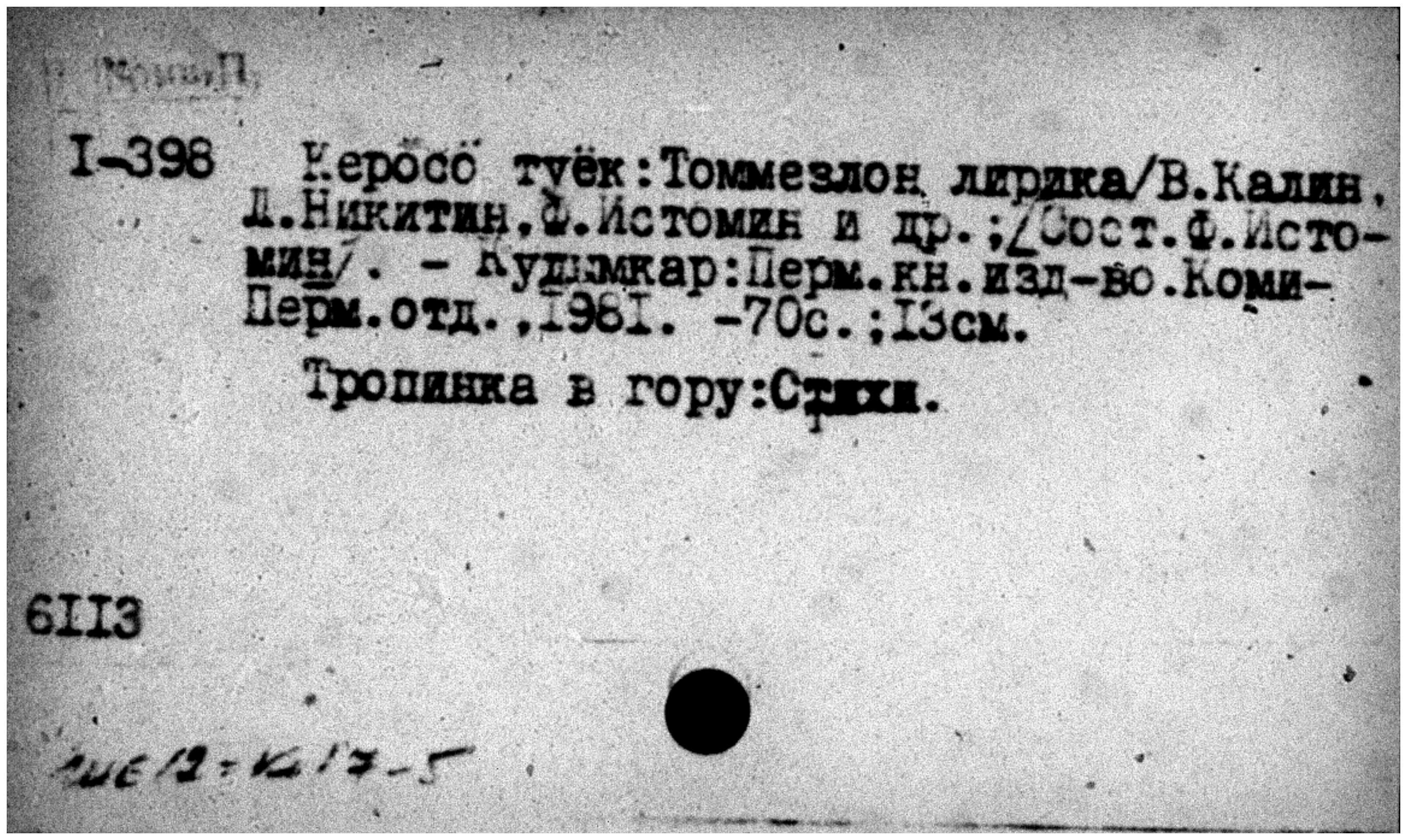 In this electronic library, users can search by key words and author or browse by alphabetical listings or special collections.

The results will list a number of documents alongside cover images. Clicking on any of these images will bring up a screen with a request for authorization. Users can use this interface to sign up and will receive a temporary password immediately, and a permanent password within 24 hours. Registration is free and relatively easy, and gives users access to all full-text documents found through this interface.

Since 1958, the Komi National Library fulfills the role of Book Chamber for the republic. The Book Chamber publishes annual editions of the letopis’ pechati Respubliki Komi and literatura o Respubliki Komi. These are annual bibliographies that include a list of all books, journal articles, newspaper articles and reviews published in Komi, or about Komi, for a given year. Since 1979, the library is also the republic’s depository for local and national literature.  The Book Chamber creates and maintains an archive of physical copies of books, journals, newspapers, and other materials published in Komi, to secure the preservation of the national bibliography. Its collection consists of more than 43,000 documents, of which about 10,000 are Komi-language materials.

Through WorldCat, users can find issues of the letopis’ pechati in physical (e.g. OCLC 10436442 or 33234025) and electronic form (e.g. OCLC 609881450 or 742440931). Users particularly interested in newspapers can consult Gazety SSSR 1917-1960: Bibliograficheskii spravochnik 5 for a list of newspapers published in Komi-permyak and Komi-zyrian between 1917 and 1960. The website of the Komi National Library also includes a database for periodicals, where users can search physical and electronic copies in the library’s collection.

The project “Knizhnye pamiatniki Respubliki Komi” of the National Library of Komi provides information about the collection and preservation of rare books published in Komi. It includes:

The search option allows users to navigate the bibliographic information provided on the website.

In addition to Knizhnye pamiatniki Respibliki Komi, the website of the Komi National Library also provides links to a number of other online projects on Komi local history, literature, and culture. The projects range from a virtual map of monuments, institutions, and streets associated with Komi writers, to photographs and documents from family archives during WWII, and from recordings of tales by Komi writers, to a virtual exhibition on Komi language and written culture.

The online platform Finno-ugorskie biblioteki Rossii is a collaborative project of the National Library of the Karelian Republic, the Russian and East European Institute in Helsinki, the Slavic library of the University of Helsinki, and the M. Kastren Society, is meant to make it easier for users to navigate the different Finno-Ugric libraries in various regions of the Russian Federation and in other countries, and to create an electronic collection of publications in Finno-Ugric languages. Users search by geographical area or by names of important figures in Finno-Ugric literature and folklore. For each of the Finno-Ugric language areas of the Russian Federation – Kareliia, Udmurtiia, Komi, Marii El, Mordoviia, Khanti-Mansiisk, Murmansk, and Tver – the website provides links to major libraries and useful library resources, a list with municipal libraries, and an overview of major educational and research institutions.

The Komi National Archive is the main archive in the Komi Republic. Its collection consists of approximately 4,500 fonds, more than 1 million documents, and about 20,000 audiovisual materials. In addition to information about the its services, the archive’s website includes lists with descriptions of the different fonds in the collection (under “spravochniki”), several thematic overviews of the archival collections (under “nauchno-spravochnyi apparat arkhiva“), and an overview of the archive’s publications.

There are two languages under the macro-language, Komi: Komi-permyak and Komi-zyrian. Komi-permyak is also referred to as Kama Permyak, Komi-Perm, Komi-Permyat, Permian and Permyak. Komi-zyrian is also known as Komi, Komi-Zyryan and Zyrian. Both Komi-permyak and Komi-Zyrian are Uralic languages. Throughout most of their history, Komi-permyak and Komi-zyrian have both used the same writing systems. Between the fourteenth and seventeenth centuries, Komi written language made use of the Old Permic alphabet. Since the eighteenth century, it has been based on the Cyrillic script, with the exception of 1932-1936, when it made use of the Latin script. The contemporary Komi alphabet, which was introduced in 1938, includes the letters of the Russian alphabet, and two additional letters: Іі and Ӧӧ. Users interested in working with vernacular languages, can download a Cyrillic extended keyboard that can be used for Komi and many of the other languages of the Russian Federation.