Khakas County was established under Soviet rule in 1923. In 1930, it was renamed Khakas Autonomous Oblast’, and in 1992, it officially became the Republic of Khakassiia, within the Russian Federation. The capital is Abakan. Khakas is a Turkic language.

The following is a beginning guide to bibliographic tools for researchers of Khakasiia. Though not a comprehensive overview, this guide outlines three primary ways research can access bibliographic information about Khakas publications:

Additionally, this guide highlights other resources related to the history, language, and culture of Khakassiia. Researchers may also want to consult the following online database for additional coverage: Elektronnyi katalog knig na iazykakh narodov RF i stran SNG on the page of the Russian National Library. Lastly, this guide highlights the electronic library associated with the National Library of Khakasiia.

The electronic catalog for the National Library of Khakasiia (elektronnyi katalog) searches all types of library holdings across both state and municipal libraries. There are number of different databases users may choose from to conduct searches. These databases include:

Note that users have the option to search using basic, advanced or professional searches. The advanced search includes a large number of fields to choose from, including (but not limited to): author, title, theme, subject, key word, ISSN, ISBN, publisher, location of publication, language of publication, range of years in which the item was published and document type. The advanced search interface is shown below.

Users may search in both Russian and Khakas. The search interface prefers Internet Explorer. Note that the website may time out, but this problem can be solved by refreshing the page. The results give basic bibliographic information, the location of holdings, an item call number, the number of available copies and occasionally an abstract or summary of the document content. A sample result is shown in the image below.

The Russian National Library’s Department of Literature in National Languages [also known as the Department of National Literatures] of the Russian Federation, Commonwealth of Independent States, and the Baltic countries has reproduced holdings catalogs in microfiche format. The national languages imprints catalogs in microfiche format diffuse most of the difficulties associated with transliteration in the vernacular languages, spelling, forms of entry, and uncertainties with the entirety of the collection. Researchers can access the entire holdings for a specific language at the Russian National Library through the microfiche set; conveniently exporting selected titles via PDF scans. Below are examples of some of the Khakas language holdings that are available. 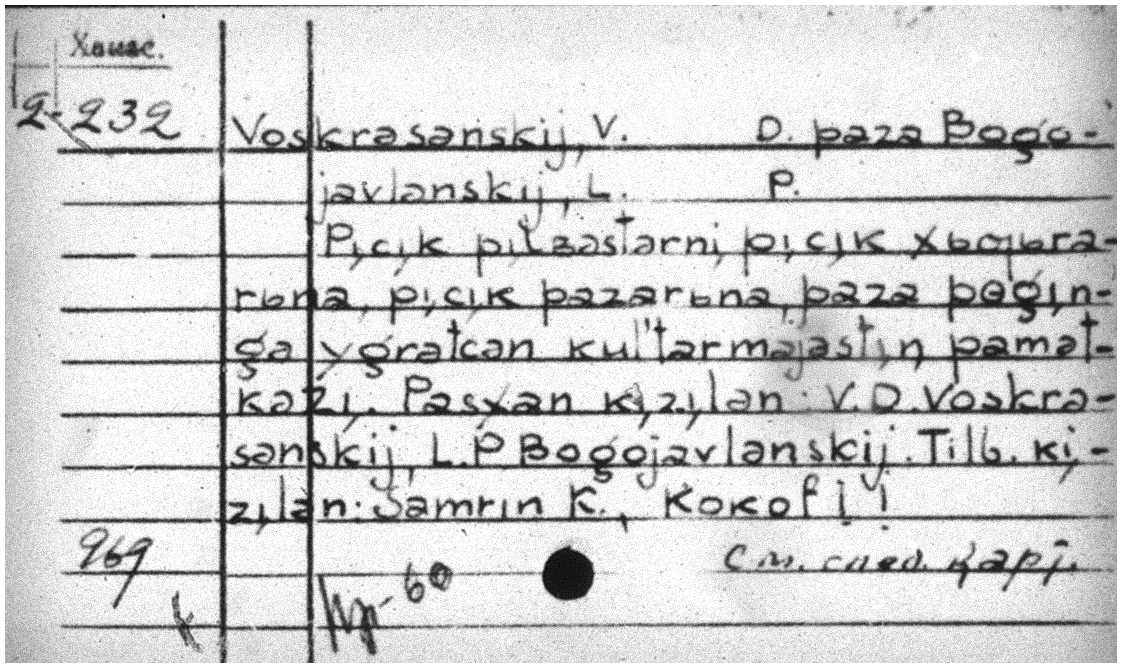 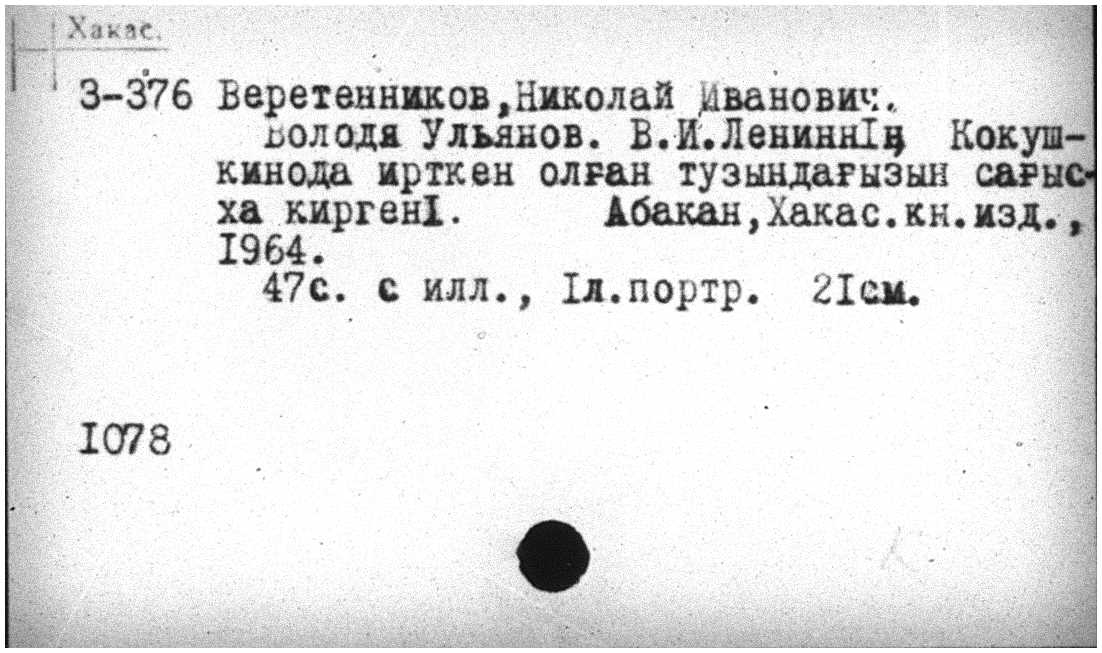 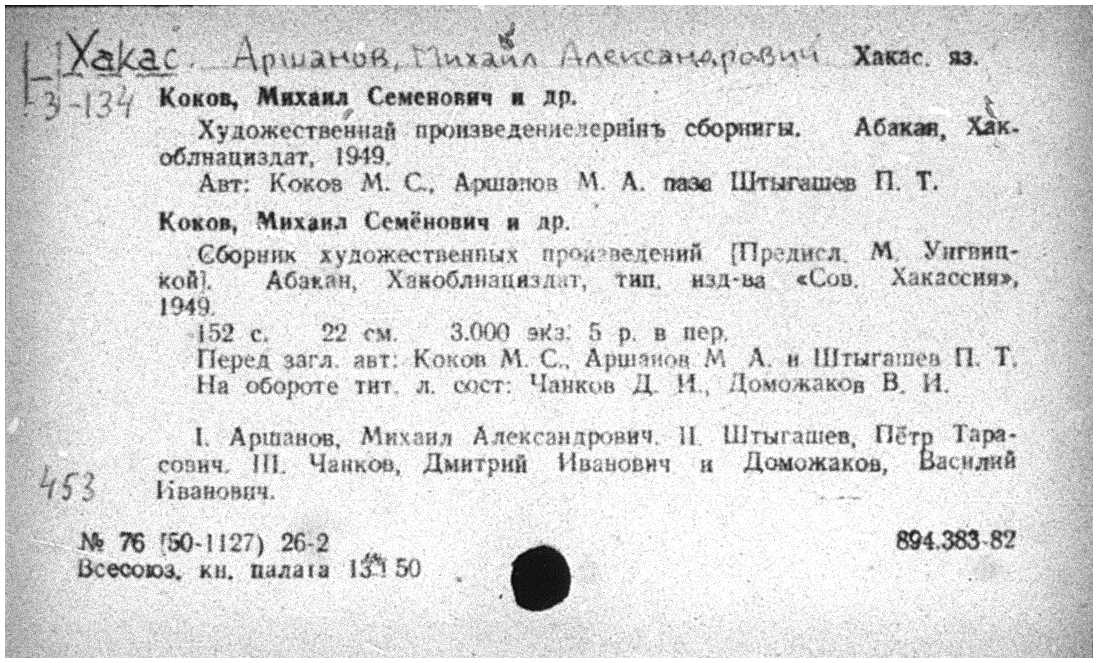 Aside from being the main library in Khakassiia, the N.G. Domozhakov National Library also fulfills the role of Book Chamber for the republic. In 1997, it started publishing the guide letopis’ pechati Respubliki Khakassiia. The letopisi pechati are bibliographic records of all items (within particular categories) published in the Republic of Khakasiia for a given year. On the website of the National Library, users can download letopisi pechati from 2004-2010 as PDF files, as well as the knizhnaia letopis’ for 2016. For some of the years, only one of two parts is available for download. Part 1 contains bibliographic information about books, journal articles, abstracts, reviews and publications about Khakassiia in the Russian press, while Part 2 contains bibliographic information about newspaper articles. Through WorldCat, users can find other issues of the letopis’ pechati (OCLC accession number 751496538).

Entry information for materials in the letopisi pechati includes a general classification number given at the beginning of the section, a consecutive entry number, author, title, place of publication, publisher, date, pagination, illustrations, size, serial statement, ISBN or ISSN, number of copies printed, price, government registration number, e.g. [94-1546]; and other necessary bibliographic information for citations. An example of a Letopis’ pechati entry is given in the image below.

Earlier Letopis’ pechati for the Republic of Khakasiia are searchable through the online catalog. However, they are not available for download as full-text documents.

For users interested in archival materials, the National Archive of Khakassiia provides helpful resources. In addition to information about the services of the archive, the website provides an electronic catalog for the collections of the national archive and several other municipal, city, and institutional archives. Additionally, the archive’s website includes numerous “online exhibitions” on a variety of topics based on archival materials, online accessible copies of scholarly articles about Khakas local history, and an overview of the publications of the National Archive’s archivists.

Khakas is a Turkic language and is also known as Abakan Tatar, Hakass, Khakhass, Xakas, Yenisei, and Yennisej Tatar. Until the late 1920s, the Khakas written language was based on the Cyrillic script.  Between the late 1920s and the mid-1930s, the Latin script was used, and since then, the Cyrillic script. In addition to the Russian letters, the Khakas alphabet includes the following characters: II, Ңң, Öö, Ӱӱ, and Ӌӌ. Users interested in using vernacular languages can download a Cyrillic extended keyboard that can be used for Khakas and many of the other national languages of the Russian Federation.

Note that the following collections are not currently available to U of I patrons: