The following is a beginning guide to bibliographic tools for researchers of Chechnia, and is not comprehensive in its coverage. At present (August 2018) the Chechen national library has no searchable databases online or electronic resources. However, this guide does provide basic information and resources related to the Chechen national bibliography, letopis’ pechati and archival materials. Moreover, users can access bibliographic information through the Russian National Library’s Department of Literature in National Languages imprint catalog. Researchers may also want to consult the following online database for additional coverage: Elektronnyi katalog knig na iazykakh narodov RF i stran SNG on the homepage of the Russian National Library.

Sources: The Great Soviet Encyclopedia (Volume 29, page 83); the Official website of the Republic of Chechniia; Ethnologue.

Note that as of Summer 2018 this library has no searchable databases or electronic resources relevant to research on the region.

The Russian National Library’s Department of Literature in National Languages [also known as the Department of National Literatures] of the Russian Federation, Commonwealth of Independent States, and the Baltic countries has reproduced holdings catalogs in microfiche format. The national languages imprints catalogs in microfiche format diffuse most of the difficulties associated with transliteration in the vernacular languages, spelling, forms of entry, and uncertainties with the entirety of the collection. Researchers can access the entire holdings for a specific language at the Russian National Library through the microfiche set; conveniently exporting selected titles via PDF scans. The following scans reflect some of the Chechen-language holdings available in microfiche format. As can be seen there are records in both Cyrillic and Latin scripts. 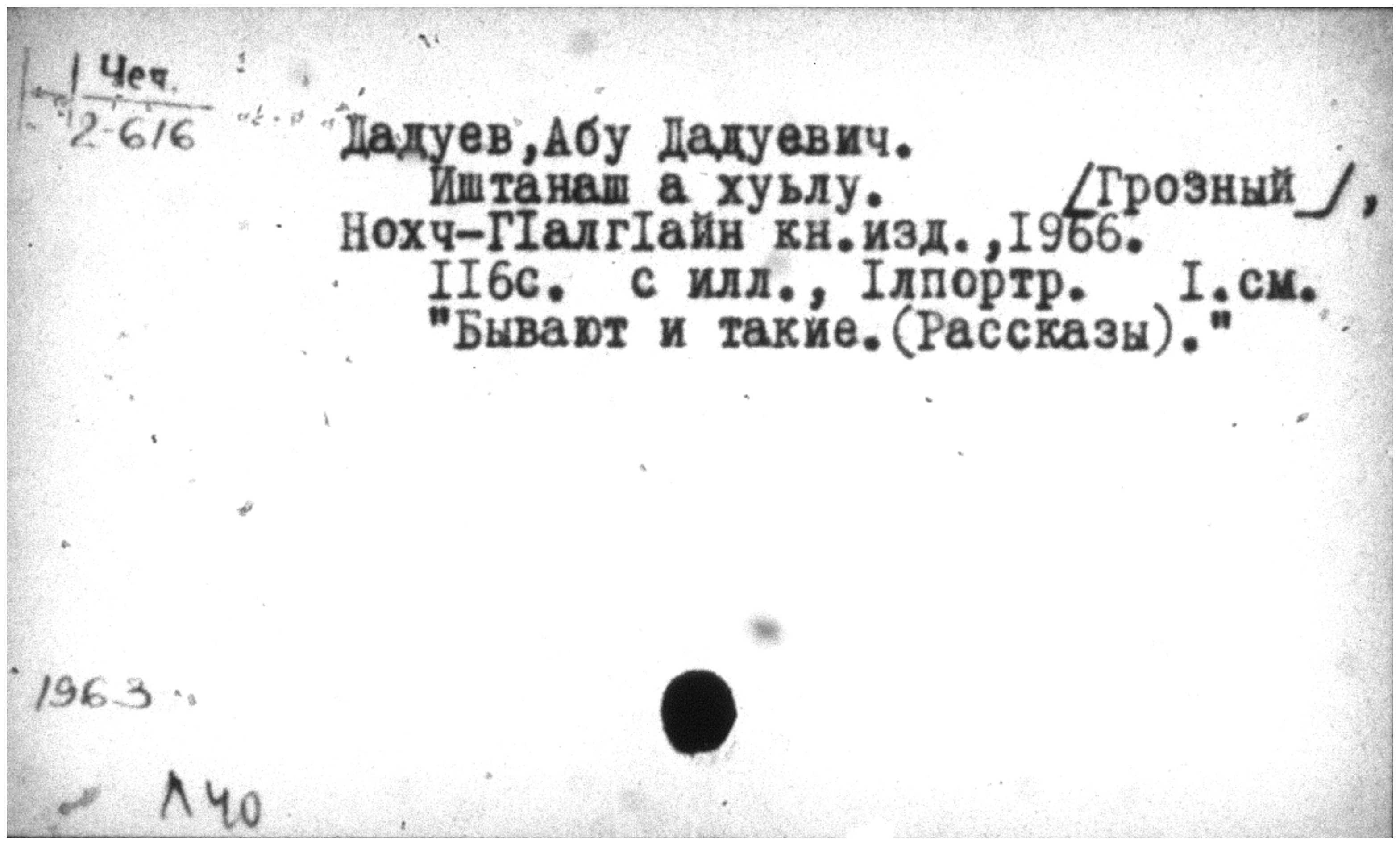 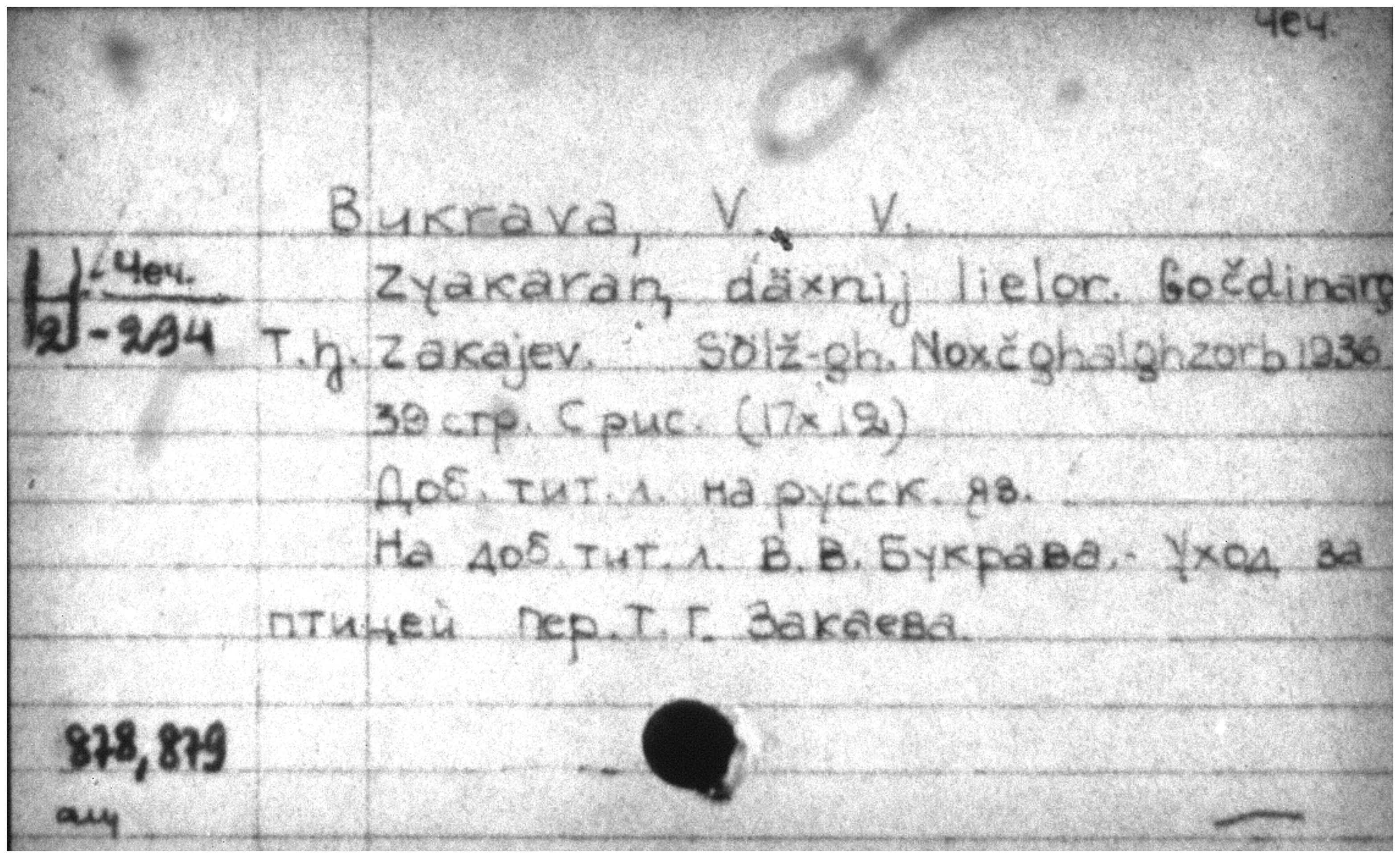 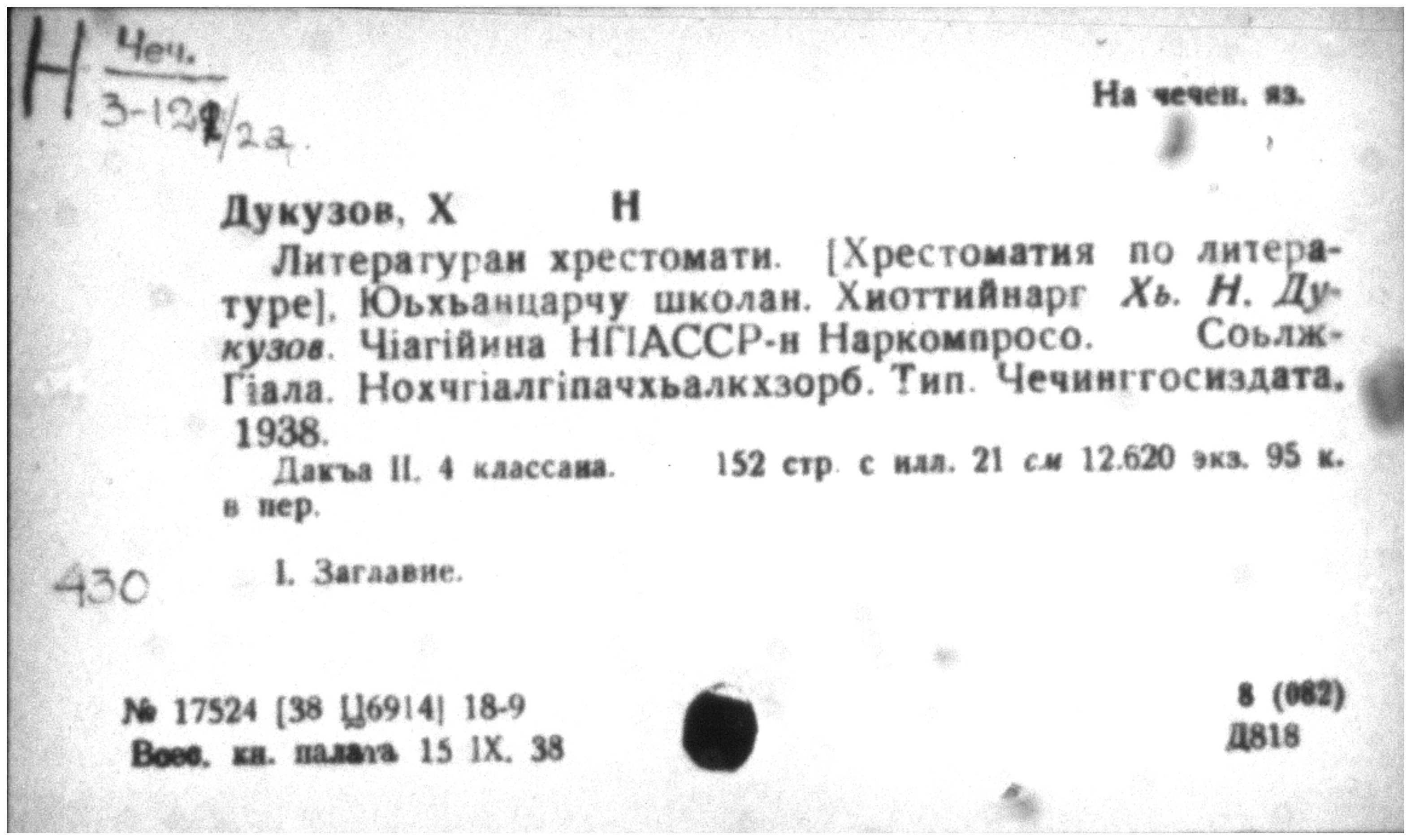 The development of the national bibliography for the Chechen Republic began in 1959. In 1965, the Republican Scientific Library of Chechniia started creating an archive for the materials published in the republic, to secure the preservation of the Chechen national bibliography. Since that time, it also creates bibliographic and statistical records of publications in Chechniia. In 1965, the first annual letopis’ pechati was published: a bibliographic list of all books, journal articles, newspaper articles, reviews, and dissertations published in Chechniia in a given year. A separate Department for National Bibliography was founded in 1986. This department fulfills the role of Book Chamber, and creates bibliographical and statistical records of materials published on the territory of the Chechen Republic. On the website of the National Library of Chechniia, users can find more information about the work and responsibilities of the Book Chamber.

The website also provides access to PDF versions of the letopisi pechati for the years 1968, 1969, 1971, and 2007-2010 are available there, as well as bibliographies of the works of major Chechen writers and poets, and an “etnokalendar’” with important dates and individuals in Chechen history. Through WorldCat, users can find other issues of the letopis’ pechati in physical (OCLC accession number 145401850) and electronic form (OCLC accession number 609514397).

105 books and pamphlets (622,000 copies) were published in 1979 in the Chechen-Ingush Autonomous Soviet Socialist Republic. The following is a list of select newspaper publications, their starting year of publication and the language in which they are published: Leninan nek” (1923) in Chechen, Serdalo (1923) in Ingush, Groznenskii rabochii (1917) in Russian and Komsomol’skoe plemia (1928) in Russian. In addition to these newspapers, there were also the following almanacs: Loaman Iuire (1958) in Ingush and Orga (1958) in Chechen. Users can consult Gazety SSSR 1917-1960: Bibliograficheskii spravochnik 5 for a more comprehensive list of newspapers published in Chechniia during these years.

On the website of the Arkhivnoe Upravlenie Chechenskoi Respubliki (AUP ChR), users can find information about the services, publications, and collections of the main archive of the Chechen Republic in Grozny. Under the header “Fondy AUP ChR”, the website provides an overview of the fonds and opisi of the archive, as well as the years in which these materials were produced. The collection includes a variety of materials, ranging from sources about Chechen history by Russians and other national republics in Russia, to photograph collections, and from personal collections by major Chechen scholars to official Chechen-language documents and hand writings. The materials are from the seventeenth to the twenty-first century, although with a focus on the nineteenth and twentieth centuries. Users can also find a list of smaller municipal archives in the republic on the website.

Chechens and Russians are the ethnic majorities in Chechniia, but there are a total of 96 ethnic groups in the republic. The Chechen language is also referred to as Galancho, Nokchilin Muott, Nokhchi and Nokhchilin and is a North Caucasian language. From the mid-nineteenth century until 1925, the Arabic alphabet was used for the Chechen language; parallel to Arabic, the Cyrillic script was used between 1862 and around 1910; between 1925 and 1938, there was a change to the Latin script; and since 1938, the language has been based on the Cyrillic script again. In addition to the letters of the Russian alphabet, the Chechen alphabet includes the letter Ӏi. Users interested in working with vernacular languages can download a Cyrillic extended keyboard that can be used for Chechen and many of the other national languages of the Russian Federation.